Haute Hawaii: A Review of the Fairmont Orchid on the Big Island of Hawaii 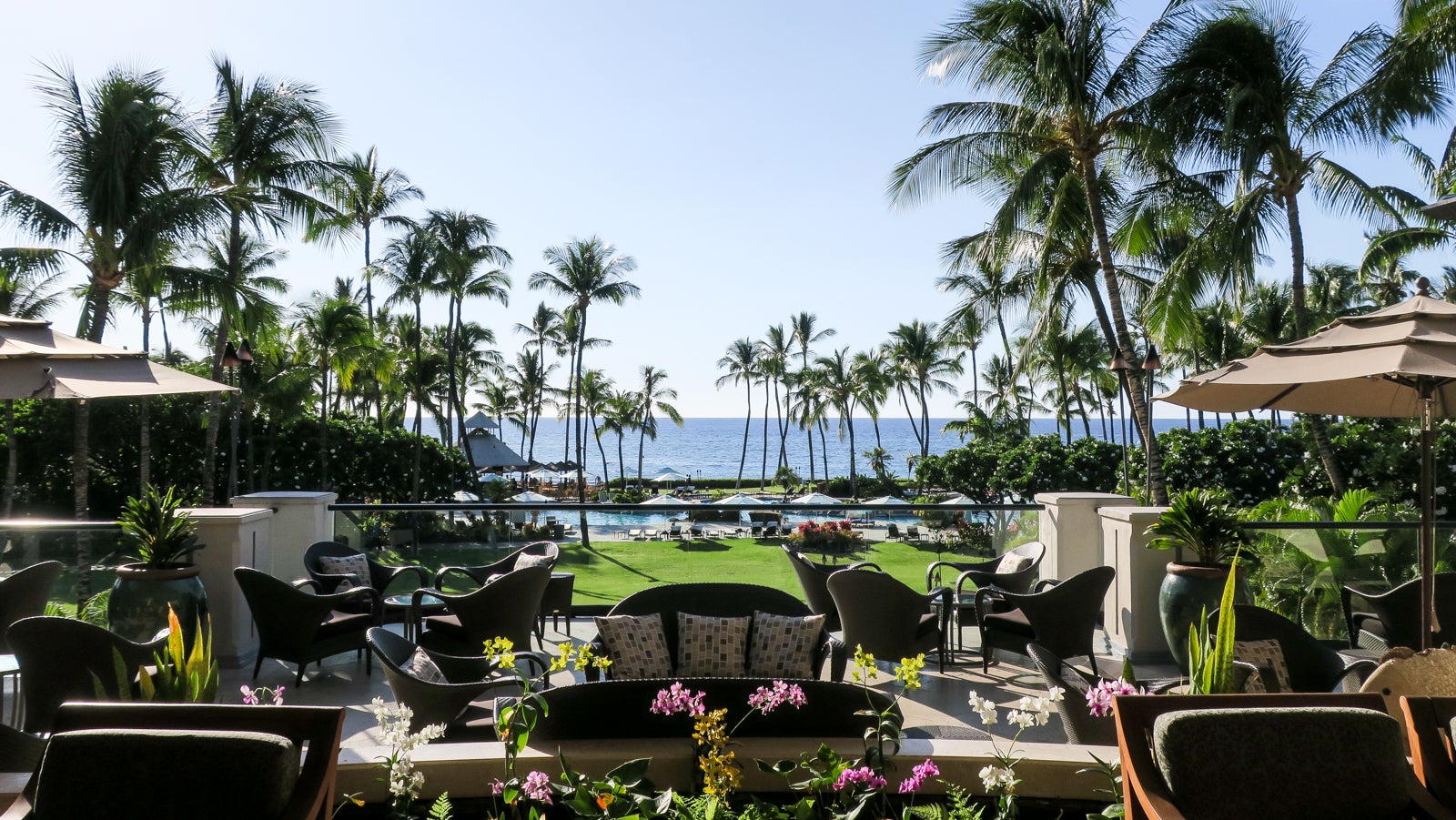 For my first trip to Hawaii, I knew I wanted to indulge in plenty of beach, golf and lava spotting, and while there were plenty of beautiful properties to choose from, the Fairmont Orchid on the Big Island drew me in because of a recent renovation and a solid points rate through the Chase Ultimate Rewards travel portal.

Now that I’ve been at TPG for a year, I had built up a hoard of Chase Ultimate Rewards points from my Chase Sapphire Reserve. I wanted to put these points to use for our trip to Hawaii, but, Fairmont, being a part of the LeClub AccorHotels program, wasn't a transfer partner. I decided to do a quick search through the Chase travel portal -- when booking through the portal, points are worth a fixed 1.5 cents apiece (TPG values each Ultimate Reward point at 2 cents each). I found a 522-square-foot partial-ocean-view room with king bed going for 24,885 points per night, which corresponds to a cash rate of about $373/night. while in other cases I may have been able to get more value out of them by transferring to a partner such as Hyatt, there weren’t any Hyatt properties on the Big Island, and we didn’t want to pay cash for the stay, so this was the best option.

The Fairmont Orchid was right on the Pacific Ocean in Mauna Lani, on the desert side of the island. It was a 30-minute car ride from Kona International Airport (KOA) and 40 minutes from the bustling village of Kona, with plenty of great restaurants, bars and shops.

Though cabs were easy to find, we opted to rent a car, since we were planning on doing a lot of exploration around the island. The Hawaii Volcanoes National Park (which just reopened) was around two hours away, and many of the impressive hikes, waterfalls and black-sand beaches were at least one to two hours away, so we spent time in the car. The Fairmont offered complimentary self-parking and valet parking for only $10 a day, which made it easy to pop in and out of the hotel.

We were greeted on arrival with beaded necklaces that made for a great souvenir! The check-in area was open-air with a clear sight line to the pool and ocean. There was also a full check-in counter just for Japanese guests. The bellhop gave us excellent information for activities both on and off the premises and was attuned to our needs. We asked for a dental kit (coming off our long flight), and the kit arrived in less than five minutes.

Our remodeled room was chic and modern, yet still had a beachy vibe. The room wasn’t huge, but the space felt bright and airy, thanks to the large sliding doors encompassing one full wall. We had a comfy king bed, TV, desk area and lounging chair. There wasn’t a minibar, but there was a standard refrigerator and Keurig with local Hawaiian coffee.

During turndown service, housekeeping left a few bottles of water, essential to beating the 90-degree-plus daily temperatures. There was also a large closet with safe, ironing board and full-length mirror. Wi-Fi was complimentary, but not the quickest at 3.5 Mbps.

The marble-filled bathroom was spacious, with a double vanity, water closet, separate bath and shower and two robes. The shower had a rainfall shower head and luxurious Le Labo products, but it would not have passed the TPG shower test (he's 6 feet, 7 inches tall).

The low light of the room was the lanai, an outdated alcove that seemingly didn’t make the extensive renovation. There was a lounge chair, two sitting chairs and a small table atop the worn tile, but the furniture was more reminiscent of my grandmother’s patio than a four-star resort.

Patio furniture aside, the view of the golf course with the ocean in the distance was still calming and beautiful.

There were seven restaurants to choose from, ranging from fast casual to fine dining. One of the nicer restaurants for dinner, Norio’s Japanese Steakhouse & Sushi Bar, was closed for renovations during our stay as it was transitioning into a robatayaki-style restaurant. The other elevated dinner option was the beachside Brown’s Beach House, which maintained a casual ambience with live music and great views.

We sampled the roasted garlic prawns, filet mignon and seafood bouillabaisse, all of which were excellent. There were also several gluten-free options, and the meal concluded with complimentary matcha cookies. Like in much of Hawaii, expect to pay a premium, but know that in our case, the quality and service lived up to the price.

We also tried the breakfast at Orchid Court, which featured a la carte options as well as standard buffet fare. The buffet included an omelet bar, pastry options, locally sourced fruit and several hot dishes, but the standout was the build-you-own smoothie bar. There was a wait at peak hours, but if you go, try to snag a table on the lanai, as the garden views far surpassed the more corporate ballroom-like appearance of the inside seating area.

The Luana Lounge was the first thing we saw when you entered the Fairmont, and thus had some of the best views in the resort. It was predominately a bar but had lighter fare, live music and a torch-lighting ceremony each night. Most guests (including us) flocked here to watch the sunset over the ocean with cocktails in hand.

The resort also boasted a grab-and-go deli, beachside bar and the Hale Kai poolside restaurant, with great options for lunch either in the restaurant or at your lounge chair. The website also said there was a private family or couple's dinner under the stars at $250 per person plus tax, but we saved our money and dined in at one of the regular restaurants instead, since they were already right there.

The property was large, with several towers spread out across the grounds. However, it was still well-manicured with hidden ponds and waterfalls at every turn.

There was only one pool, but it was spacious and had views of the ocean and mountains. The oddly curved shape provided many smaller nooks, so it never felt crowded, and there were plenty of lounges in both the sun and the shade. There were also dozens of day beds and cabanas available to rent, but most them were occupied for much of the day. There were floats and water games available poolside, for a fee.

The beach was partially man-made and on the smaller side, but because the lava rocks formed a cove, the water was calm and clear. This made it perfect for swimming and snorkeling, as well as appropriate for children and novice swimmers. Like the pool, there were add-on activities available for a fee, including kayaks, paddleboards and snorkeling gear.

There were also signs warning you might see the endangered Hawaii green sea turtle, but we weren’t lucky enough to spot one this time.

The spa without walls was another draw of the Fairmont. Treatment areas were on the beach and in the garden, in secluded areas away from the regular pool and beach areas but still catching the ocean breezes. The spa itself also had a smaller indoor facility with a sauna and steam room, but it was mostly used as a locker room for guests changing before or after their outdoor treatments.

The 1,700-square-foot fitness center had various cardio and weight machines. There was a sliver of a view of the pool and ocean (if you squinted), but the gym also offered a daily outdoor yoga class and morning floating yoga class on stand-up paddleboards.

The Fairmont also boasted two golf courses and an entire tennis complex with 10 courts, all available without leaving the hotel. Like the other pool and beach activities, these classes and activities incurred an incremental cost and were not included in the resort fee.

The Fairmont Orchid benefited greatly from the renovation, as most of the resort and rooms are now modernized. Compared to other high-end properties on the Big Island, like the Four Seasons Hualalai, the Fairmont gets you a similar experience at a lower price. I would highly recommend this resort and would love to come back if I find myself on the Big Island again.