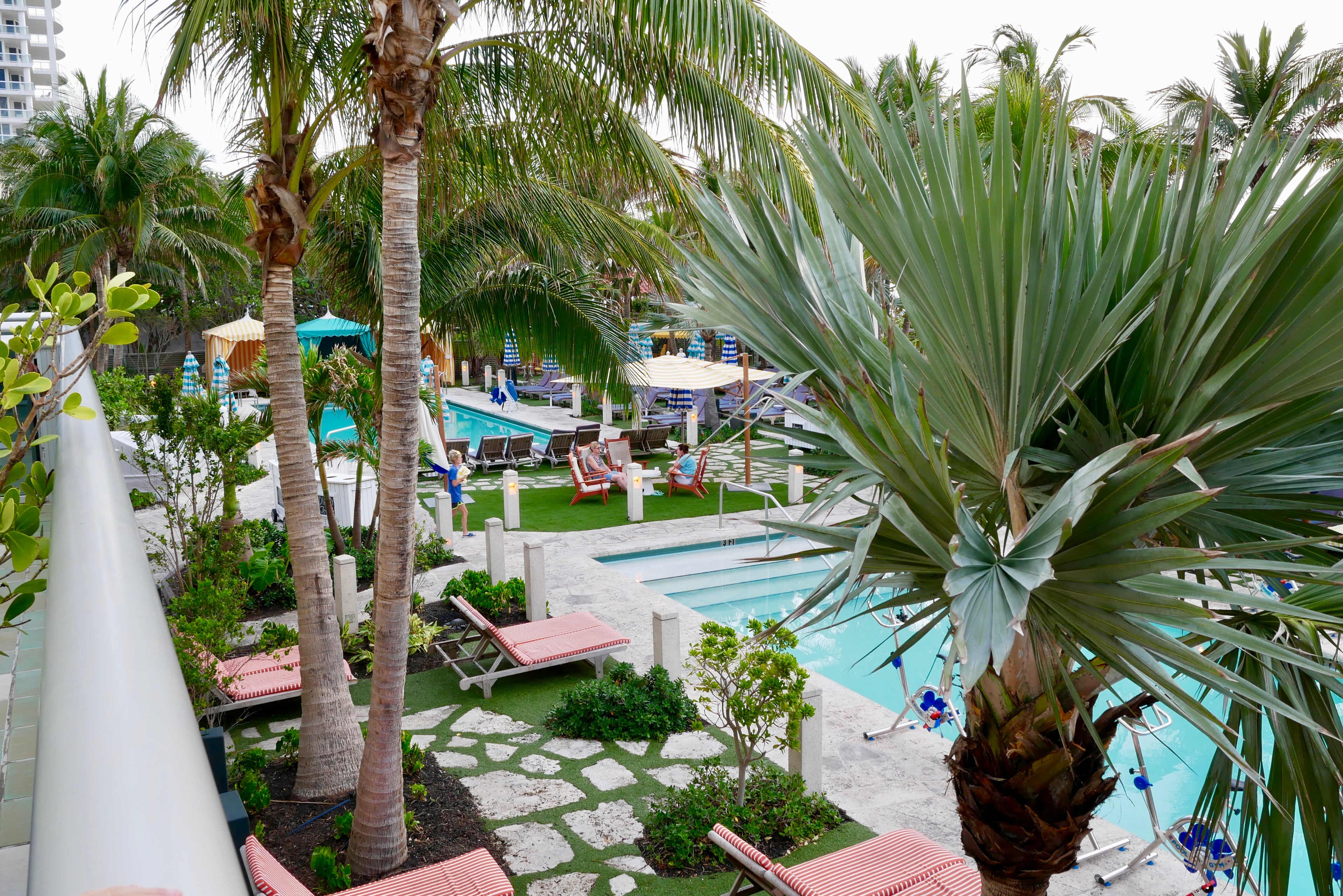 Earlier this year, my wife and I were craving sunshine. So we booked a long weekend trip to Miami with our kids and two friends and their infant daughter. The goal was to find somewhere close to the beach at a reasonable price but not too close to the busiest part of South Beach. After lots of searching, we settled on the Confidante, a property previously known as the Thompson Miami Beach until Hyatt acquired it in March 2016.

Not long before Hyatt's acquisition of the hotel, the hotel had undergone an $82 million renovation. With the exception of the heart of the inside dining room of the hotel's main restaurant, local chef Richard Hales' Bird and Bone, the hotel felt fresh, airy and light.

The Confidante was a Hyatt Category 6 hotel prior to 2018. Now, it's a Category 4 hotel, and a standard king room can be found in the low season for as low as $153 or 15,000 Hyatt points per night, but the cash rate jumps to above $300 per night on the weekends (the points rate stays at 15,000 Hyatt points per night). Cash rates were generally that high (starting around $300 per night) for the long weekend we booked in April, which was the tail end of spring break for many schools.

As we often do when traveling as a family, we looked at options for various suites, since those are often cheaper than booking adjoining rooms. The Confidante had a few types of suites, starting with the Miami Suite and going up to two unique, presidential-style suites: the Miranda Suite (1,025 square feet) and the penthouse suite (980 square feet). We decided on an ocean-view Suite (700 square feet) for our three-night stay. Cash rates were around $500 per night.

What I was surprised to see, however (and which I unfortunately did not get a screenshot of), is that for some reason, Amex Travel was showing the same rate ($299 per night) for every room type at the hotel for which Hyatt was offering a prepaid rate. And indeed, there was an ocean-view suite available for $299 per night. After calling the hotel to confirm it wasn't a mistake and that they'd honor the rate, I booked through Amex Travel.

Note that by booking through Amex Travel, I forfeited the opportunity to earn Hyatt points. But I'm not a Hyatt loyalist, anyway — and how can you turn down snagging that suite for $299 per night?

For our families, the location was just what we wanted: The hotel was in Mid-Beach, a hip area but quieter than the heart of South Beach. There was a Walgreens within walking distance for basic necessities, and the beach was right out the backdoor behind the pools and boardwalk. An Uber from Miami International Airport (MIA) took around 25 minutes in moderate traffic.

We arrived around 4:30pm, and there was no wait at check-in. We were assigned a suite on the hotel's second floor. I asked about the prospect of an upgrade and was told that the room type was upgradeable but that nothing was currently available. The employee at the desk did invite me to check again the next day, if I wanted.

The couple we were traveling with had a more frustrating check-in experience. They also booked an ocean-view suite through Amex Travel (after I called them to give them the tip), but were told that their room wasn't ready, despite the fact that the published check-in time was 4:00pm. After approaching the desk multiple times to get status updates, they were finally assigned a room around 5:15pm, and were told that they were "upgraded" to a Crown Suite. I visited their room, and while there was plenty to like about the Crown Suite, it was certainly not an upgrade: It was a smaller room, it usually costs less per night, and the room's balcony faced downtown Miami, so there was almost no view of the ocean. It would have been nice if the hotel staff — who knew they were traveling with an infant and had to wait over an hour past check-in time to get a room — had offered to get them a drink at the bar or send something to their room, but no such offer was made.

The rooms were spread across two towers with separate elevators. Our suite was in the eastern half of the building and was the last room on a long hallway at the southeastern corner of the hotel.

The suite was incredibly spacious. As it turned out, rooms on the second floor had much higher ceilings than others throughout the hotel. These ceilings appeared to be between 12 and 14 feet high.

The decor was festive without overdoing it, though the room's finishes didn't appear especially luxurious.

One of the highlights of the second-floor suite was a massive wraparound balcony, which overlooked one of the hotel's two pools.

One downside to being so close to the pool: The Confidante had DJs on some nights, including Saturdays. The music was pretty loud (and eclectic) the first night we were there, and so the next morning, I asked the desk if it would be possible to change rooms. I was actually told that we could get upgraded to the Miranda Suite, but it was next door our current suite, so it would be the same in terms of noise level. Ultimately, we decided the music wouldn't be as loud or as late from Sunday to Tuesday, and it wasn't worth it to us to move all our stuff, so we stayed put.

The shower included a rainfall shower head. Given the height of the room, it would have easily passed the TPG shower test.

The Confidante provided Jonathan Adler-branded toiletries, including 8-ounce bottles in the shower. But beware: Don't take those larger bottles home with you! The hotel kindly warned that you'd be charged $20 per bottle.

The Confidante had three main food and beverage venues. Bird & Bone was the main restaurant, open daily for breakfast, lunch and dinner. It had both indoor and outdoor seating. At the pool and at the Confidante's section of beach, the hotel served two variations of menus from The Backyard, which had smoothies, salads, small bites and fantastic cocktails. Finally, just next to the restaurant inside the hotel, there was Cafecito Bar, which served coffee (all day) and pastries and yogurt (until 11:00am).

Our first night at the hotel, we all had an early dinner at Bird & Bone. We were lucky to snag one of the outdoor tables.

Ravenous after the flight from New York, we ordered a ton of food: the hot dog from the kids' menu, the skillet cornbread, grilled oysters, shrimp grits, hot chicken, french fries and crispy Brussels sprouts.

Bird & Bone was a terrific dinner option. My only complaint was that the hot chicken wasn't hot at all! So if you're looking for a spicy dish, consider asking them to kick it up a notch.

The next morning, looking for something easy before hitting the pool and the beach, we opted to check out Cafecito for a coffee and returned to Bird & Bone for breakfast. Like dinner, breakfast did not disappoint. We tried the buttermilk waffle, kids' pancakes, the avocado toast with a poached egg (hiding under all those sprouts!) and eggs Benedict. We had a delicious, enjoyable breakfast with great service.

We also spent a ton of time lounging at the pool and at the beach. The painkiller was my favorite specialty cocktail, but I ended up drinking mostly piña coladas, which the bar served topped with coconut shavings.

The centerpiece of the hotel's amenities was The Backyard, what the Confidante called the outdoor area of the hotel between the guest rooms and the beach. There were two pools of about equal size. I'm not sure if there is any official policy on the matter, but while we were there one was basically the adult pool and the other was dominated by kids (including ours).

Surrounding the pools were a few different kinds of cabanas, available to rent for the day. Some even included a TV!

There was also a well-stocked outdoor bar.

Between the pools and the guest rooms was a garden area, with different places to sit.

While the pool was constantly busy during our stay (except early in the morning, when I took many of these photos), we never had much of a problem finding a group of chairs together.

On the far side of the north pool, just before the gate that led to the beach, was a fun little sandbox with toys for young kids.

Just past that gate was the beach, which was magnificent.

In addition to The Backyard and the beach, the Confidante also had a rooftop spa (which was undergoing repairs, with no completion date given; in the meantime, spa services are being offered in indoor suites) and a 24-hour fitness center, neither of which we visited during our stay.

The Confidante is a great property that gave us just what we were looking for: solid rooms for decent value, good food, pools and proximity to the beach. While there were no total failures of service, the service never felt particularly warm, inviting or even attentive while we were there, with the exception of the servers at Bird & Bone, who were great. At the end of the trip, everyone in our group decided we'd gladly stay at the Confidante again, especially at the rate we grabbed through Amex Travel.