A Review of Aegean Airlines (A320/A321) in Business From Heraklion, Greece, to Athens to Frankfurt

Articles
Brian Biros spent most of the last 15 years backpacking through 100+ countries. He writes TPG's Points & Miles Backpacker column, so you'll more likely find him in a hostel than a Ritz, if you can find him.
Follow
Nov. 23, 2018
•
13 min read 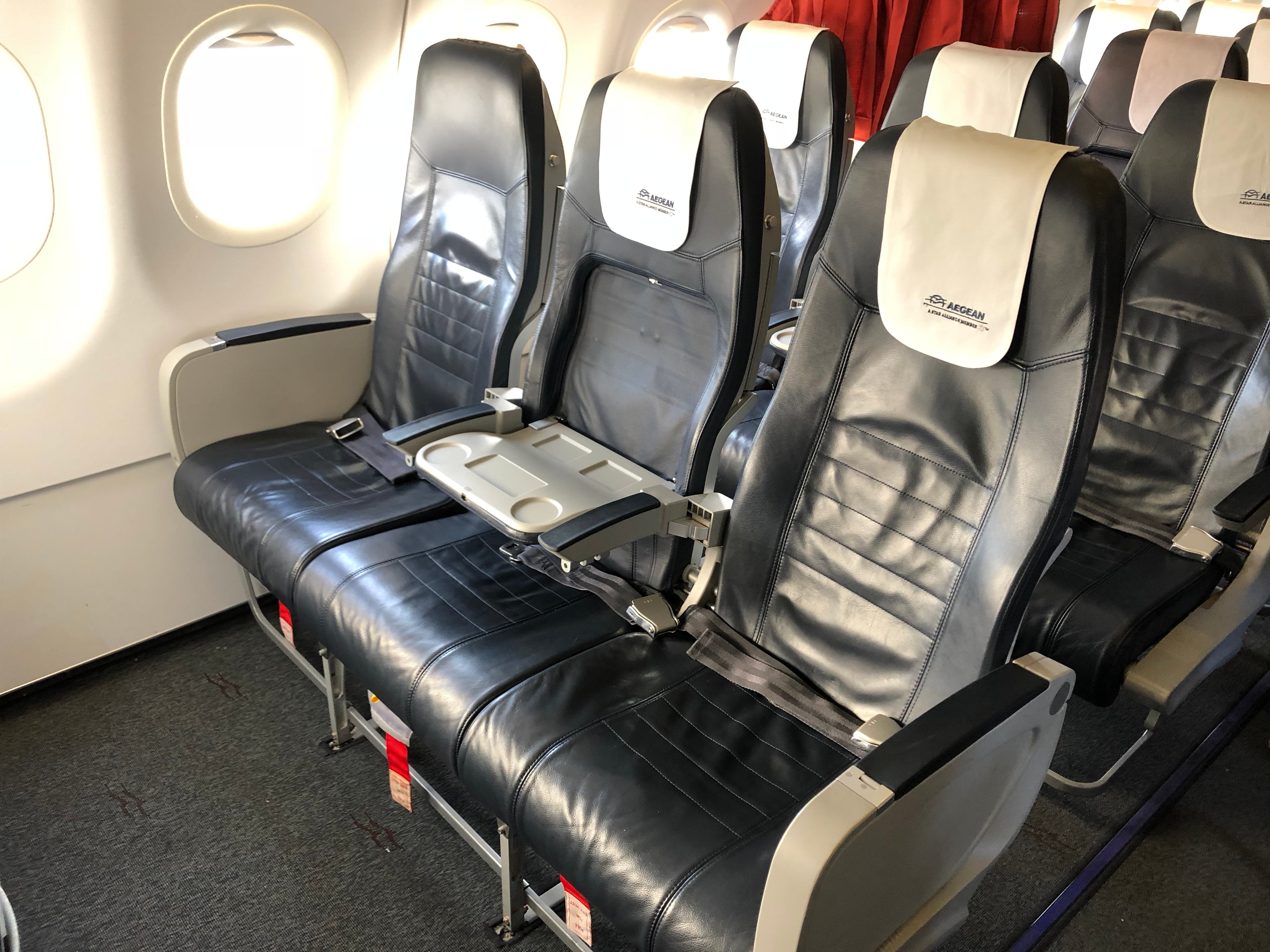 I avoid flying in premium cabins like TPG avoids economy — I only do it when completely necessary.

That's what happened when I found myself on a very tight schedule needing to get from Crete, Greece, to Frankfurt, Germany, with little advance notice. There were no cheap one-way flights and no award space in economy. There was availability, however, in business class. I've had worse dilemmas, so I forked over the extra miles and readied myself for Aegean Airlines' intra-Europe business class.

I had only one date on which I could fly, and, coming from a Greek island, my options were limited. I checked for awards on the main three alliances, and my only option was in Aegean Airlines business class from Heraklion (HER) to Athens (ATH) to Frankfurt (FRA). I used 20,000 United MileagePlus miles to book the partner award, although I would have preferred an economy ticket for 15,000 miles. Luckily, it's relatively easy to amass MileagePlus miles, since the program is a 1:1 transfer partner of Chase Ultimate Rewards. If you're feeling like your account balance is lacking, consider signing up for either the Sapphire Reserve or Preferred, both of which are offering a sign-up bonus of 50,000 points after spending $4,000 within the first three months of account opening.

The first flight was operated by Aegean's regional subsidiary, Olympic Air. After a quick layover in Athens, Aegean would take me on to Frankfurt.

Heraklion Airport was pretty dead at 6am. While there was a dedicated business class/Star Alliance Gold lane, it didn't save any time over the other lanes.

The Goldair Handling Lounge in HER, accessible with Priority Pass, didn't open until 7am, so I didn't get to check it out.

In Heraklion, boarding was divided between premium/elite and economy passengers.

Priority boarding didn't do much good when it took us into a room with all of the other passengers where you waited for a shuttle bus together.

Cabin and Seat: Heraklion to Athens

As expected, Olympic Air's disappointing business class was just economy-class seats with a permanent tray table over the middle seat.

I had plenty of legroom in the first row.

"Business class" was two rows for a total of eight seats, and three of them were occupied.

I was offered a newspaper, but it was in Greek. The other passengers had water, but I wasn't offered a drink. I did get a couple candies that were offered to all of the passengers. I was also given a hot towel before takeoff.

Recline was standard. Compared to economy seats, it was decent. But, again, this was sold as a business-class seat.

Food and Beverage: Heraklion to Athens

The HER-ATH leg, despite being only 35 minutes in the air, did come with decent enough breakfast. It consisted of cranberries and sweet cream on a pastry, a small ham-and-cheese croissant and yogurt with honey.

Thirty-five minutes later, we touched down in Athens. The best perk of business class was during deplaning. Only the business-class passengers were allowed to leave first. Afterward, the other two passengers and I boarded the bus, the doors quickly closed, and the bus sped off.

During my layover in Athens, I did get a short visit in the Aegean Airlines flagship lounge.

The lounge opened into a large room with lounge seating.

It was a bit crowded on a Friday morning, but it wasn't hard to find a seat. With my bar set at Centurion Lounge, this was rather roomy.

These big red couches in back would have been perfect nap spots on a longer layover.

There was a business area with three computers and a printer.

The cafe seating on the opposite side of the lounge was less busy.

The highlight for me was the juice bar, which I don't often see in lounges. Options were strawberry-and-coconut smoothies, lemon-and-mint juice, orange juice, yogurts and fruit salad.

Other breakfast options were fruit and pastries.

Of course, along with more pastry options, there was plenty of Greek yogurt.

There were two types of bagel sandwiches, cheese and pastrami.

The cooler had standard drinks like juice, soda and beer.

It was 8am, and the liquor was coming out for the day.

It had been a few years since I'd been Star Alliance Gold, and I had grown accustomed and content with Priority Pass lounges when traveling abroad. This lounge was a reminder that the Star Alliance lounges are a class above.

Another reminder was right next door at the Skyserv lounge, which I had visited the previous week with Priority Pass. Food and drink offerings were bare, and the lounge wasn't any more appealing than the concourse, which was also where they sent patrons needing to use the restroom.

After the lounge, it was time to board the ATH-FRA leg of my journey.

Again the line was divided into premium/elite passengers and economy class. The gate agents were enforcing the boarding lanes, too.

Cabin and Seat: Athens to Frankfurt

On board, business class on this A321 was, again, an economy hard product.

The armrest over the middle seat was hacked to give an extra 2 inches of seat width, but the seat was exactly the same. All this did was create an asymmetric seat that moved me off center when using both armrests. The seat would have been much better if the armrest had been kept in its normal spot.

The first row aisle seat was pretty annoying during boarding. The aisle narrowed significantly right at the seats, meaning I caught plenty of stray bags, hips and elbows. I'd recommend any other seat in the front cabin over 1C and 1D.

The curtain was closed behind the second row to separate business from economy, and it did give a feeling of privacy.

The front curtain was also closed for most of the flight. Other passengers walked through to use the restroom, but it didn't feel very inviting. I don't fly premium very often, but I don't remember being on a flight where the front curtain was closed for this long. I guess it was to add to the "exclusive" feeling.

There were no special amenities for this business-class flight. And the inflight entertainment began and ended with the newspaper I was offered when I boarded. At least it was in English, I guess.

Food and Beverage: Athens to Frankfurt

On ATH-FRA, which was three hours in length, a proper menu and meal service were offered.

Breakfast choices were a savory pudding or Greek pancakes. I almost skipped over the first when I saw the word "pudding," but I'm glad I didn't.

There were plenty of options from the bar.

Including the lounge, this was actually my third breakfast of the morning. I opted for the savory pudding, which was pretty similar to a quiche. It had apaki (Cretan smoked pork), green peppers and onions, and the flavor was on point. It was firm and toothsome, and it combined well with the cheese and tomato sauce.

The fruit plate had a good choice of fruits, but the manouri cheese didn't really mesh with any of them. It did work with the bread though, so I didn't need the marmalade. And I felt like I had enough yogurt to last me a good while.

Did the Illy cappuccino have a heart in it? Either way, it wasn't hot. I would have preferred heartless hot cappuccino.

Later in the flight, I was perusing the drink menu, and one liqueur stood out: Chios Mastiha served with chocolate and pralines. I had no idea what the liqueur was, but I saw chocolate, and I'll be damned if I wasn't going to squeeze every last bit of luxury out of this premium flight experience.

When I asked the flight attendant about it, she said it was "very nice" as she made an "OK" symbol with her hands. She was right. I've since looked up Chios Mastiha. It is from the Greek island Chios and is flavored with mastic oil from a small evergreen shrub that grows on the island.

Later into the flight, there was a second towel service, and repeated drinks were offered. An uneventful three hours after takeoff, we landed in Frankfurt, Germany.

I know these seats are the standard forward cabin you find on several European airlines for intra-Europe flights, but it's hard to ever get past these being sold as business class. Despite the terrible hard product, the food was tasty, well-prepared and had the right dosage of Greek flair. The service was attentive and felt premium, as if the flight attendants didn't even notice there were three seats in my row. The highlight of the experience, though, was the Aegean Airlines flagship lounge in Athens.

However, I simply cannot recommend spending the extra miles for these seats. For me, it was my only option, but if economy is available, save your miles for another flight or a true premium redemption.