Zero G flights: a cheaper alternative if you can't afford to fly to space

Articles
Harriet Baskas is an award-winning journalist and the author of eight books. She writes, most often, about airports, air travel, unusual museums, and odd adventures for a variety of outlets, including her blog, StuckatTheAirport.com.
Feb. 20, 2022
•
5 min read 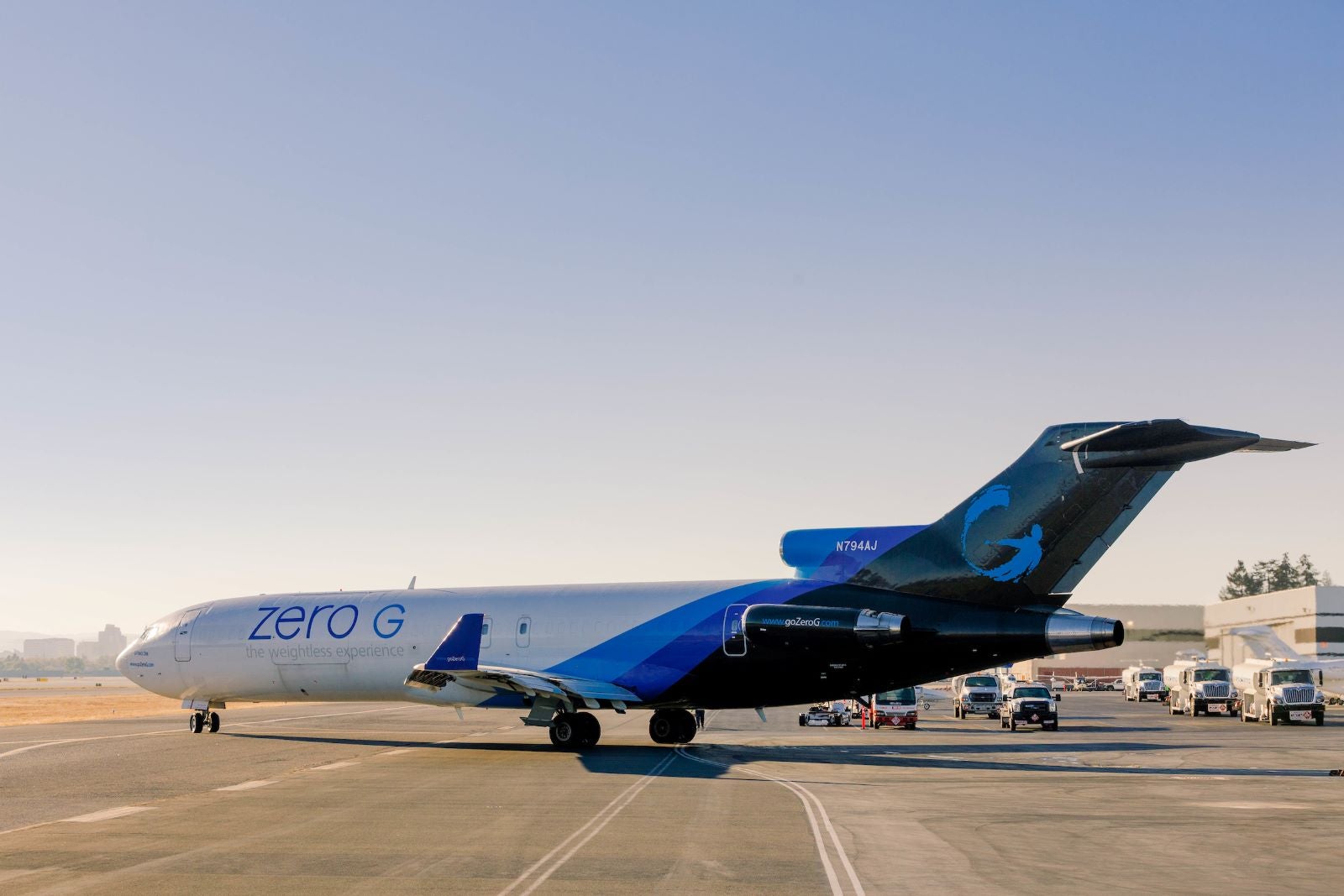 If you don’t have the $450,000 right now to buy a ticket to space on a Virgin Galactic’s rocket ship (or the $150,000 required deposit), there are some other less expensive and easier-to-access ways to test out the weightlessness that astronauts experience.

One popular option is on Zero-G’s modified 727 Boeing, which one of TPG’s reporters flew on last year. The company recently posted its spring flight schedule. So, if a weightless, out-of-this-world adventure is on your bucket list, get your calendar out.

Between March and June 2022, the plane dubbed G-Force One (get it?), will be stopping to take earthlings on zero-gravity adventures in Florida at the Kennedy Space Center’s Launch and Landing Facility, and in Houston, Austin (at the tail end of the South by Southwest Conference & Festivals), Las Vegas, Thermal, Calif. (during Coachella), Seattle, Fort Lauderdale, New York, Denver, Oakland and Long Beach, Calif.

Ticket prices start at $8,200, plus taxes and fees; up from $7,500 when TPG last flew. For people like Kenneth Sanchez from Pasadena, Calif., the price tag is not a barrier. He grew up fascinated with aviation and aerospace and a desire to be an astronaut and has already flown with Zero-G twice.

“It's amazingly fun and emotionally moving, all at once; a form of ’altered state’ which can cause one to reflect on so many aspects of life,” he told TPG via email. “The experience is more a life event that is truly priceless.”

Sanchez and his wife plan to take a Zero-G flight again soon, with friends, and he’s hoping to travel to space at the earliest opportunity.

To create the weightless environment for the Zero-G flights, pilots fly the plane in a series of about 15 parabolic arcs. Each time the plane goes over the top of an arc, there is a short period during which everyone on the plane experiences weightlessness.

For those who may be worrying, Tim Bailey, Zero-G’s supervisor of inflight, told TPG, this space tourism adventure is not like the “Vomit Comet” flights of yore.

“It was the NASA version of this plane that was called the Vomit Comet,” says Bailey. They flew it very specifically to maximize the taxpayer dollars and did as many parabolas as they could to get as much weightless research time as they could get per flight.”

Flights would be "aggressive," he said, and if someone on board was sick, they’d just keep going. “We don’t do that,” says Bailey. “Zero-G eases people into it by doing some low gravity parabolas at first and taking breaks. That helps cut the motion sickness way down.”

There are some restrictions on who can take a Zero-G flight, though not as many as suborbital flights impose). Flyers must be at least 8 years old and there is no upper age limit; Zero-G says people in their 90s have flown. So have people with vision, hearing and mobility challenges. For now, there are also a series of pandemic-related precautions in place including COVID testing, reduced capacity and an in-flight mask requirement.

The inside of G-Force One looks like a cargo plane: empty. There are no lavatories, no galleys, no drink carts, no windows, and just 38 airline seats (and not the fancy kind) in the rear of the plane. The rest of the space is open and padded to allow for floating around.

It may not look like a regular plane, but Zero-G’s Bailey said the plane still operates under strict FAA regulations. Flight attendants are trained to deal with the full range of emergency scenarios — and give the familiar safety instruction demos — but also work as a team with coaches on board to lead passengers through the weightlessness experience.

Bailey told TPG that passengers include people who have saved up for this once-in-a-lifetime adventure and some people whose Zero-G flight is their first time on an airplane. He also said many Zero-G flyers are people whose usual mode of travel is by private jet.

Though it’s all over the news, unruly passengers have not been an issue for Zero-G.

“It’s a really expensive flight so we don’t anticipate someone spending the money to fly with us and then wanting to cause problems,” said Bailey. But we do have people who fly with us who forget that we are not a charter service like their private jet. So, we sometimes must tell people that, yes, they really do have to buckle up and turn off their phones.”

Related stories
How to earn points in the JetBlue TrueBlue program
Big news: Virgin Atlantic is joining SkyTeam alliance
Amazon is launching a 2nd Prime Day sale in October — here are 4 things you need to know
Limited-time way to get half-off Virgin Voyages sailings, plus more perks for Bilt cardmembers
Featured image by (Photo Courtesy of Zero-G)
Editorial disclaimer: Opinions expressed here are the author’s alone, not those of any bank, credit card issuer, airline or hotel chain, and have not been reviewed, approved or otherwise endorsed by any of these entities.