Here's Why You Almost Never See Pepsi Served on a Plane 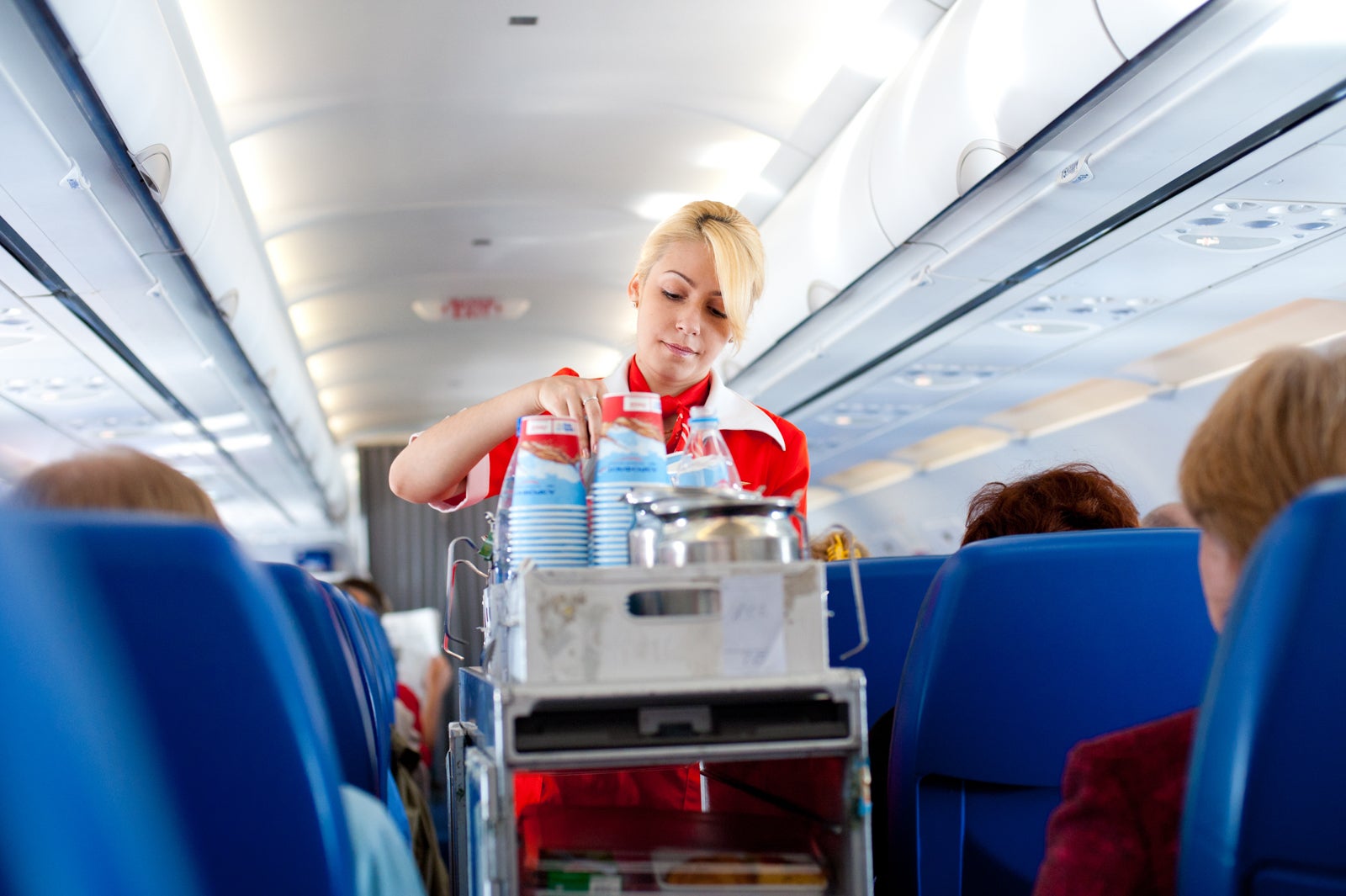 Here's Why You Almost Never See Pepsi Served on a Plane
This post contains references to products from one or more of our advertisers. We may receive compensation when you click on links to those products. Terms apply to the offers listed on this page. For an explanation of our Advertising Policy, visit this page.

PepsiCo is enormous. Worth over $150 billion, the multinational corporation owns Gatorade and Tropicana, Ruffles and Lay’s, Fritos and Cheetos, Mountain Dew, Aquafina, 7 Up, and, of course, Pepsi. Pepsi products are everywhere.

Everywhere, that is, except in the air. Board a plane in Dulles, Dublin or Dubai, and the soft drinks served are almost certainly going to be those from Pepsi’s age-old rival, Coca-Cola. United serves Coke. Cathay Pacific serves Coke. EasyJet serves Coke. IndiGo serves Coke. In fact, we examined more than 50 of the world’s biggest airlines and could find just a handful — Ryanair, Emirates, Pakistan International Airlines, Wizz Air — that primarily serve Pepsi products.

On the one hand, this makes perfect sense. Coca-Cola is the bigger company, with a market capitalization of about $200 billion. In 2017, Coke's flagship brand had a share of the US soft-drink market of 17.7%, compared with Pepsi’s 8.3%, according to Beverage Digest. Even Diet Coke almost has as many adherents as regular Pepsi — it was the No. 3 soda in America, with 7.6% market share, far outstripping No. 7 Diet Pepsi's 3.5%.

And even the word “Coke” has long been the "Kleenex" of soft drinks, a generic term used by many, particularly in the US South, to designate any and every soda (yes, even RC). Why would airlines, which generally try to appeal to the widest swath of possible passengers, throw their lot in with the relative underdog?

In the past, though, many did. Not all that long ago, there was far more soft-drink competition in the air. In 1993, TWA announced it would switch from Coke to Pepsi, and two years later Air France did likewise, even wrapping one of its Concordes in Pepsi branding. In 2002, United joined Northwest Airlines and America West in serving the soft drink that called itself the choice of a new generation (technically, Pepsi’s slogan then was “Think Young, Drink Young”). In 2008, Alaska Airlines and Horizon Air dropped Coke to serve Jones Soda, a Seattle producer of soft drinks with quirky flavors such as Crushed Melon, Fufu Berry and green apple. And in 2009, Delta went through a prolonged existential crisis when it acquired Pepsi-serving Northwest — though the Atlanta-based carrier had had a partnership with Atlanta-based Coca-Cola since 1927, it took months to decide which soft drink it would stick with. (Spoiler alert: It went with Coke.)

Today, amid Coke’s dominance, a few airlines stand out for being nonexclusive. EVA Air serves both Coke and Pepsi products. American Airlines not only serves Coke and Pepsi’s Sierra Mist but also carries Dr Pepper, which is owned by Plano, Texas–based Keurig Dr Pepper. And last February, Southwest dropped Sprite (a Coca-Cola product) for 7 Up and Canada Dry lemon-lime sparkling water, both from Keurig Dr Pepper.

Southwest justified the switch by citing "the rising popularity of sparkling water — particularly flavored,” but other airlines said it was to — as AA spokesperson Sunny Rodriguez put it — provide “our customers with choice and the beverages they enjoy.” (She added: “Of course, being a Texas-based airline, we have to support the hometown drink, Dr Pepper.”) But if that were the case, wouldn’t every airline go multibrand?

Still, this makes sense — after all, Americans can be pretty particular about their carbonated beverages. (Even though soda consumption has decreased in recent years, and even though, on an airplane, our sensitivity to sweetness and saltiness decreases, somewhat evening out Coke and Pepsi’s differences.) Switch from dominant Coke to underdog Pepsi, and you can expect to ruffle feathers.

When United did just that in 2002, said Sara Nelson, president of the Association of Flight Attendants-CWA and an active United flight attendant, “The most common response that I would get was, ‘It’s not called Pepsi and Jack — it’s called Jack and Coke!’” Frequent flyers have routines, she said, “and when you when you change anything for people it is really jarring — and especially in a place like air travel, where people sort of have to check their control at the door of the airplane.”

To lose the comfort of Coke was a serious blow. From economy to first class, she said, “People were really upset.”

It didn’t help, Nelson added, that this came at a time of cost-cutting for the airline, which declared bankruptcy at the end of 2002. To save money, flight attendants no longer gave passengers the whole can of soda — they just poured a cup. As much as passengers resented Pepsi, they resented the stinginess, too. Some Coke die-hards, Nelson said, would abstain totally — and suffer withdrawal symptoms for the duration of the flight.

Flight attendants themselves hated the switchover. For one, many preferred Coke to Pepsi and could empathize with irate passengers. But also, said Nelson, they “would complain that Diet Pepsi would bubble up more than Diet Coke and take longer to pour and keep us in the aisle longer.” Not good for an airline newly focused on efficiency. When United switched back to Coca-Cola products five years later, there was much rejoicing.

(TPG hasn't been able to independently confirm if Diet Pepsi really does foam up more than Diet Coke, but it's true of diet sodas in general.)

As emotional as people get about their soft drinks, however, not everyone believes airlines care much about passengers’ tastes.

“I’m sure they are saying, ‘Our customers are preferring Coke or Pepsi,’ but I do not believe that is correct,” said Bijan Vasigh, a professor of air-transport finance at Embry-Riddle Aeronautical University. “There is no loyalty anymore. People are changing airlines based on five or six dollars on the ticket.”

Really, it’s about money. The airlines, he said, “have agreements with vendors, depending on which contract is more conducive” — i.e., giving them more soda at a lower price. Meanwhile, the beverage makers view providing cheap drinks to airlines as another form of advertising to captive passengers. If Coke is dominant, it’s probably because the company is underbidding Pepsi.

“This is how airlines are making decisions, solely based on dollars and cents," Vasigh said.

What’s odd about these agreements is that, for the most part, they’re fairly hidden. Though airlines proudly proclaim the liquor brands they serve, their websites rarely say whether they offer Coke or Pepsi. To compile our list of which airlines serve what, we had to comb the web for images of inflight drink menus and nag publicists by email. If the beverage makers really do view airline service as a marketing opportunity, they don’t seem to be trying very hard.

As Vasigh sees it, that’s because it’s not actually cost-effective. “Making it more public would require more revenue from Coca-Cola or Pepsi,” he said, and airlines just don’t make enough from beverage service to promote their offerings. No one wants to pay to wrap a jet in soda logos any longer.

More important, though the media likes to play up the Coke-versus-Pepsi competition as a “soda war,” in reality, the companies may be in cahoots.

“The motive for Coke and Pepsi is duopoly,” Vasigh said. “These two brands are dominating. One company could be more aggressive in their advertising to get as many airlines as possible.” The other, meanwhile, could say, “Instead of giving a lucrative contract to airlines, I can give it to someone else.”

For Pepsi, that someone else might be hotels. Right now, following its acquisition by Marriott, Starwood hotels are being required to serve Pepsi exclusively, just like the new parent company. Marriott served Coke in its hotels until 1991, when the soft-drink maker refused to loan the chain $100 million.

Based on Internet comments, Starwood fans are unhappy: “Pepsi is disgusting,” wrote one. Quoth another: “This is blasphemy!”

Pepsi didn't respond to requests for comment for this story. A Coca-Cola spokeswoman said merely, in an email, that "we know our brands don’t make the travel experience; but we believe they enhance the experience by providing refreshment and inspiring moments of happiness."

Pepsi’s apparent priorities could, of course, change in the future — nothing is ever particularly consistent up in the air. But the duopoly is likely to hold, with Dr Pepper as the rare wild card. Even Alaska Airlines’ experiment with Jones Cola ended less than two years later with a return to Coke.

“As we continue to spread our wings beyond the West Coast, it’s increasingly important to respond to our customers’ requests for Coca-Cola products onboard,” an Alaska Airlines vice president told the Seattle Times in 2010.

One soda we’re pretty sure you won’t see in the air is RC Cola, which Nelson, the flight attendants’ association president, remembers once having to serve on a United flight out of “some outstation” — Wichita? Omaha? — roughly two decades ago.

“I don’t know what happened — they ran out of all the Coca-Cola in town,” she said.

Passenger reactions were not positive.

“It threw the whole thing off.”