Your pilot might commute to work. By plane. From Germany.

Articles
Mike Arnot is the founder of Boarding Pass NYC, a New York-based travel brand and a marketing consultant to airlines. A private pilot, he can sometimes be found above the skies of New York City.
Follow
Jan. 18, 2020
•
8 min read 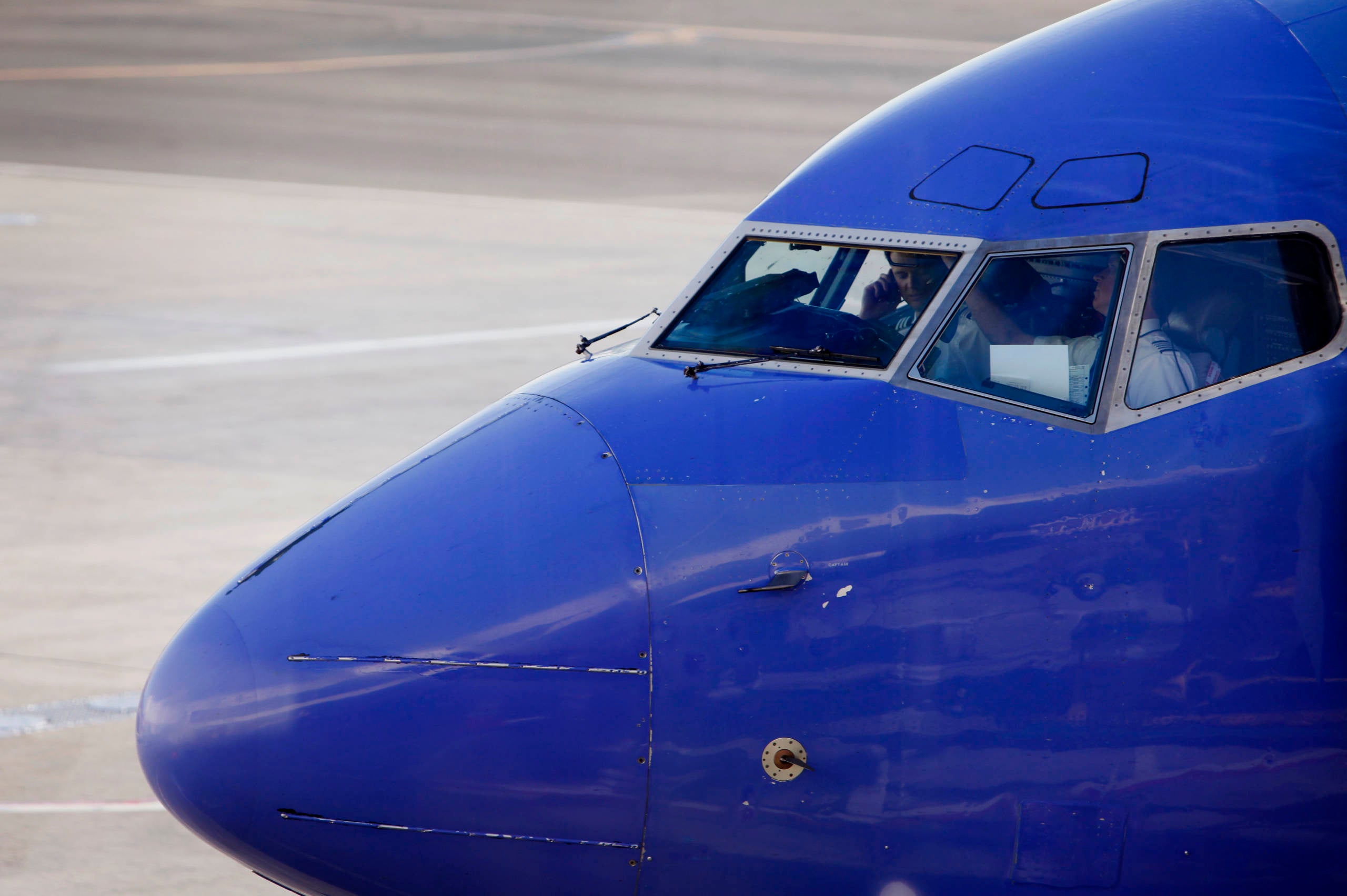 The captain of your flight between New York and Boston might live far away from either of these two cities. And it's not a rarity, but commonplace in the industry. Indeed, at the time of his water landing in the Hudson River in New York, "Sully" Sullenberger lived in California, commuting across the country to work from his airline's base in Charlotte, North Carolina, some 2,600 miles away. Others live in Puerto Rico, and yes, even Europe.

Pilots are based at domiciles that typically coincide with an airline's hubs. You'll find Delta pilot bases in Atlanta and Minneapolis; United in Houston and San Francisco; JetBlue in New York and Fort Lauderdale, for example. (Here is a map.) But many pilots choose to live elsewhere and commute to work. They do so by hopping a free ride on their airline, or even in a jumpseat on the flight deck.

Why do pilots commute?

Shannon Pereira commuted from Charlotte, North Carolina, to Chicago's O'Hare Airport — a two-hour flight — for 10 years. She loved living in Charlotte for the weather and the city itself, she said.

"People do it for personal reasons, maybe spouses or jobs, or even a city where they have child care. I know some people will take two to three flights to work at JFK or Boston, especially if they live in the middle of the country. And then they start work. Boston and New York are not cheap and a lot of people either can't afford to live in base or don't want to spend that kind of money," she said.

I spoke with other pilots who requested anonymity before speaking with me.

A first officer at a regional carrier echoed Pereira. He lives in Missouri where he grew up, but whose base is in Ohio. "The cost of living is exceptionally low here compared to the national average. As a regional airline first officer, I'm not living paycheck to paycheck by living in Missouri. That wouldn't necessarily be the case if I lived in Queens or Brooklyn. I have triple the living space for not even half the cost," he said.

A third pilot I spoke with said that he and his girlfriend live in Seattle, where she's a flight attendant. He makes the commute several times per month to Chicago. "We are both outdoorsy types, and don’t enjoy the bar scene or downtown living lifestyle Chicago has to offer," he said.

But commuting by air can be rough. "It's never stress-free," Pereira said.

That's especially true if the commute involves a connecting flight, like the Missouri-based regional pilot has. He flies from Missouri through a hub such as Atlanta, Dallas or Chicago, to then continue to his base in Columbus. He'll do this four times per month, arriving the night before his first scheduled flight."Pilots don't wish a two-leg commute on our worst enemy," he said. "None of my flights is a guarantee, and I've seen it all. I've been on a full flight, where every seat (was) taken, except for the jumpseat. And then, I was told by the captain that my weight in the front put us over the weight limits. They extended the jet bridge again, and I had to leave."Another pilot said in an email that he lives in upstate New York and will drive four hours to his base, rather than fly in. "On the beginning and end of every trip I'd lose a day having to just get to work," he said. "Then, I'd be down to just four days of actually being at home with my wife and two kids, sleeping in my own bed. The rest of the time is spent just getting to and from work or working. That's why I almost always will do the four-hour drive into base because frankly I'd rather be driving eight hours a week and get home late, or leave home early, than lose all those extra days trying to catch flights."

What about Mother Nature?

Typically, a pilot is supposed to arrive 30 minutes in advance of their scheduled report time. But what happens if a pilot can't get to the base in time because of a maintenance issue, or weather?

They'll call up their airline's operations and explain. It's not ideal, one pilot said: "Typically most pilots plan ahead very thoroughly so as to not miss a trip. Invoking the contract rarely goes in favor of the pilot for commuting."

In practice, this means that pilot can get out of trouble with their employer if they miss a shift due to circumstances they can't control.

A regional first officer I spoke with commutes from Atlanta to New York's LaGuardia airport. The weather can be a problem in Atlanta during the summer, and in New York during the summer and winter. "That's where it gets kind of tricky," he said. "You need to show the airline that you have at least two flight options to get to your base. If those options are both delayed or cancelled, depending on the airline, you'll be exempt for any discipline." Some carriers cap the number of times you can "plead the weather" at six times per calendar year. For his part, this pilot said it rarely happens that he can't get to the base.

"The hardest time to commute is during the holidays and summer," Pereira said. "In those cases, there's a lot of passengers and weather is a factor, whether it's snow storms or thunderstorms."

Typically, a pilot will monitor the number of seats available for their commuter flights a few days before their scheduled work days. This is done through an online system at each airline, but there are also apps that let pilots view seat availability on other airlines. StaffTraveler, for example, is a peer-to-peer information-sharing source, where pilots can query for flights on other airlines through a system of credits. Most airlines allow pilots from other carriers to ride in the back or the jumpseat, as a courtesy and by specific agreements.

There is an established system for riding jumpseats; it's called Cockpit Access Security System, meant to ensure that only vetted, verified pilots are allowed on the flight deck. But that's not all a commuting pilot needs to get on board, whether in the cockpit or in an unsold passenger seat.

"People will bring by Starbucks gift cards for the gate agents," Pereira said. "We're freeloaders, begging for rides. We'll be the last on the plane, the last assigned. We have to play the game."

Pilots from Ponce — and yes, even Amsterdam and Germany

Pereira said that when she worked at a regional airline, there was a pilot who would commute from Germany. He'd fly a compressed schedule and then return home for two to three weeks. At her current airline, she said, there are plenty of pilot commuters from Puerto Rico, where the sun shines and the cost of living is low.

"I've met a pilot for our [mainline carrier] that lives in Amsterdam but commutes to New York twice per month," the Atlanta-based regional pilot said. "He said that inevitably he'll sit in the first class section with all the perks, and worst-case scenario, he'll sit in the jump seat and have access to the crew bunk."

But they don't get all of the benefits. Pilots riding jumpseat are not allowed to drink; they're considered to be on the job as an alternate pilot. The same goes for those flying in the back in uniform.

So, the next time you see one on your flight, know that they're on their way to work. Or better yet, on their way home.

Mike Arnot is the founder of Boarding Pass, a New York-based travel brand, and a marketing consultant to airlines, none of which appear in this article.

Our points-obsessed staff uses a plethora of credit cards on a daily basis. If anyone on our team wouldn’t recommend it to a friend or a family member, we wouldn’t recommend it on The Points Guy either. Our opinions are our own, and have not been reviewed, approved, or endorsed by our advertising partners.
See all best card offers
Related stories
News
Cruise lines begin resuming ship departures from Florida ports that closed due to Hurricane Ian
Guide
Maximizing the British Airways distance-based award chart
News
Chasing elite status on Alaska Airlines? A flight to California this fall could help
Deals
Flights to Auckland starting under $700 round-trip