Articles
Katherine Fan is a former senior travel features reporter at The Points Guy who covered everything from personal finance to travel and aviation.
September 7 2022
•
7 min read 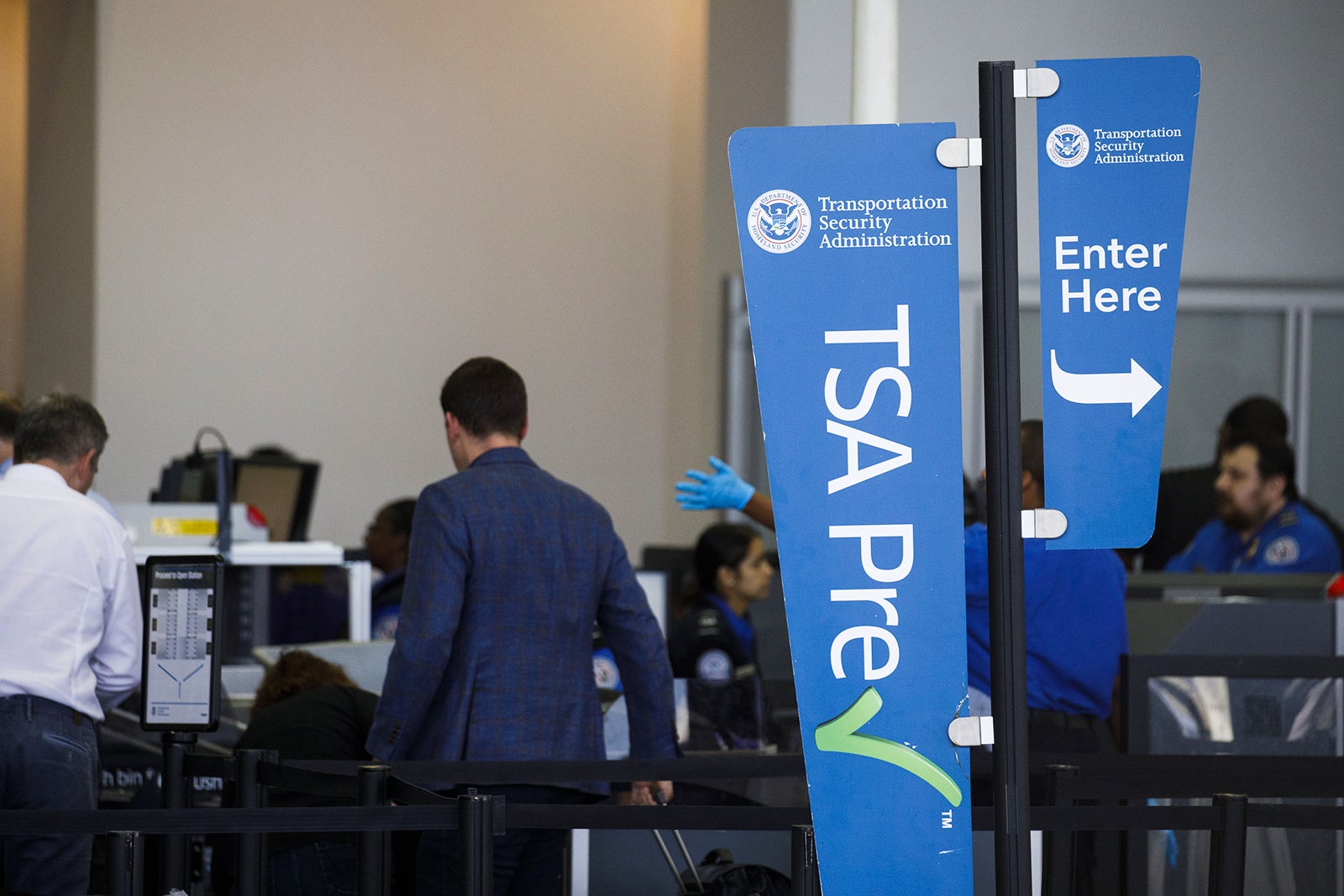 It's been a long summer of airport delays, as many COVID-19 travel restrictions were lifted, and a record number of travelers returned to the skies. As a result, we've seen check-in lines that take hours, so the need to find ways to expedite the airline security process is more important than ever.

It helps to sign up in advance for Trusted Traveler programs such as TSA PreCheck and Global Entry; we're also fans of Clear, which stores your biometrics for a speedier security process and can be combined with PreCheck. Also, the free and easy Mobile Passport app helps to navigate passport control if you don't have Global Entry (or have had trouble getting an appointment after signing up).

Unfortunately, even if you have all of these services secured in your virtual wallet, things can still go awry. Occasionally, even though you've received a Trusted Traveler number through PreCheck, that reassuring designation does not appear on your boarding pass.

Related: Global Entry vs. TSA PreCheck: Which is better?

It's a stressful situation, but there are fixes to help you if this happens.

Here’s what to know about PreCheck, a few reasons why you might not have PreCheck lane access designated on your boarding pass and what to do about it.

TSA PreCheck is not a guaranteed service perk

Every so often, glitches happen and airlines make mistakes. Additionally, the terms of service surrounding TSA PreCheck state that, despite holding Trusted Traveler status, the privilege of accelerated security process is not guaranteed.

A few months ago, TPG reporter Zach Wichter (a TSA PreCheck superfan) was on his way to Chicago from New York when he realized the familiar green icon wasn’t on his mobile boarding pass. Wichter feels strongly that no frequent traveler should ever have to take their shoes off in an airport. So, he was willing to do whatever it took to get the check mark added back — even if it meant standing in extra lines at the airport to find out what happened which ultimately took longer than the standard security lane would have.

It turned out he was denied PreCheck because his ticket was mistakenly booked for “Zach Wichter” instead of “Zachary,” which appears on his ID and in his Trusted Traveler profile. In order to get the perk restored, the airline had to cancel and rebook his ticket before he proceeded through security.

Fortunately, a friendly JetBlue customer service agent was able to help him out and make the ticket change for free. However, the whole ordeal underscored that even for PreCheck regulars, small glitches can seriously impede the ability to take advantage of the benefit.

Other TPG readers have had similar issues. More from them below.

Related: 7 ways to get free or discounted TSA PreCheck, Global Entry and Clear

Once you are approved for TSA PreCheck, you’re issued a Known Traveler Number, which designates you as a Trusted Traveler. This ID is your ticket to the PreCheck lane — but only if airlines know that you have it.

To that end, it’s always worth double-checking your frequent flyer airline profiles to ensure that your KTN is populated into the correct field in your account, especially if you’re flying with a carrier you don’t frequently fly. It’s an easy oversight, but also an easy one to fix as long as you check in with enough time to add it to your account and reprint your boarding pass. (Note that often you'll have to call the airline so that you can recheck in for the update to activate.)

“Check the spelling,” Facebook user David Keith told TPG Lounge members. “Even a misplaced period or a missing middle name” can be enough for security to note the discrepancy and flag your boarding pass for closer scrutiny. Double-check to see if you used your middle initial instead of your middle name written out, or vice versa.

Other typographical discrepancies can become issues as well. “Be mindful of hyphenated surnames too,” said Lounge member Anne Watal. “When I did my Global Entry interview, the agent told me not to put the hyphen in my last name (even though my license and passport have the hyphen).”

Unfortunately, the privilege of passing through enhanced security lines is one that comes with a five-year expiration date. With all the other deadlines, dates and reminders we juggle on a daily basis, it can be easy to forget which metaphorical string around your finger is attached to that all-important expiration date.

However, the TSA doesn’t care about everything else in your appointment book: If your access is expired, no amount of begging, pleading or arguing will get you into that PreCheck line.

Fortunately, you can reapply for Global Entry renewal, which comes with TSA PreCheck, beginning one year from the expiration date. PreCheck renewal, on its own, is available online (plus online renewals are less expensive than new signups). So plan ahead, put the expiration date on your calendar with a reminder to renew and ideally, sign up for your renewal appointment well before your next trip.

Related: How a 5-minute trip to the airport saved me from months of TSA PreCheck purgatory

When you get the dreaded SSSS

This unfortunate security designation is enough to make anyone sigh in frustration. SSSS, short for Secondary Security Screening Selection, is an arbitrary airport security measure that selects certain travelers for additional inspection. How or why this designation appears is a mystery for the most part. The Points Guy struggled with multiple SSSS designations following a 2015 trip to Turkey, and Zach found himself marked SSSSpecial as well for no apparent reason.

Unfortunately, if you also have been sssspecially sssselected for this “privilege,” you will only be able to check in for your flight at the airline counter. You almost certainly will not be able to go through the PreCheck line either, as you will receive a thorough inspection from TSA agents.

If this dreaded circumstance befalls you, there’s no easy way out. Pack some patience and get to the airport early so you have plenty of time and don't have to worry about missing your flight.

There are a number of ways to handle a missing PreCheck designation on short notice. If you find out about the error before you arrive at the airport, you can call your airline and give them your KTN over the phone. Several TPG Lounge members also reported successfully fixing the error on their own by adding their KTN into their frequent flyer profile, then checking in again via the airline website or mobile app.

Other travelers suggest going straight to social media. “Contact TSA via Twitter and they will fix it for you in 5-10 minutes,” TPG Lounge member Mark Forquer said. “[I’ve] done this twice, [and] they were actually very helpful.”

If you don’t find out about the missing PreCheck designation until you’re at the airport, take your boarding pass back to the airline check-in counter and ask them to add your KTN to your itinerary — even if you think it’s not worth the trouble at that point. If you’re already in a time crunch, the difference in time saved going through the PreCheck line could make or break your chances of getting onto your plane. You’ll have to weigh the pros and cons of getting out of line for the ticket counter on a case-by-case basis, but my personal experience has always been in favor of acquiring PreCheck access.

In a pinch, adding Clear to your digital toolbox; even without TSA PreCheck, it will help you avoid some of the worst security lines at the airport.

Related stories
First, Club Suite and the rest: Flying the British Airways 777 in all 4 cabins
10 best hotels to see the northern lights
You won’t want to miss New York City’s newest immersive art space
New welcome offers: Earn up to 150,000 points on these Marriott Bonvoy credit cards
Featured photo by Bloomberg via Getty Images
Editorial disclaimer: Opinions expressed here are the author’s alone, not those of any bank, credit card issuer, airline or hotel chain, and have not been reviewed, approved or otherwise endorsed by any of these entities.