6 things I learned during my stay at the W Montreal 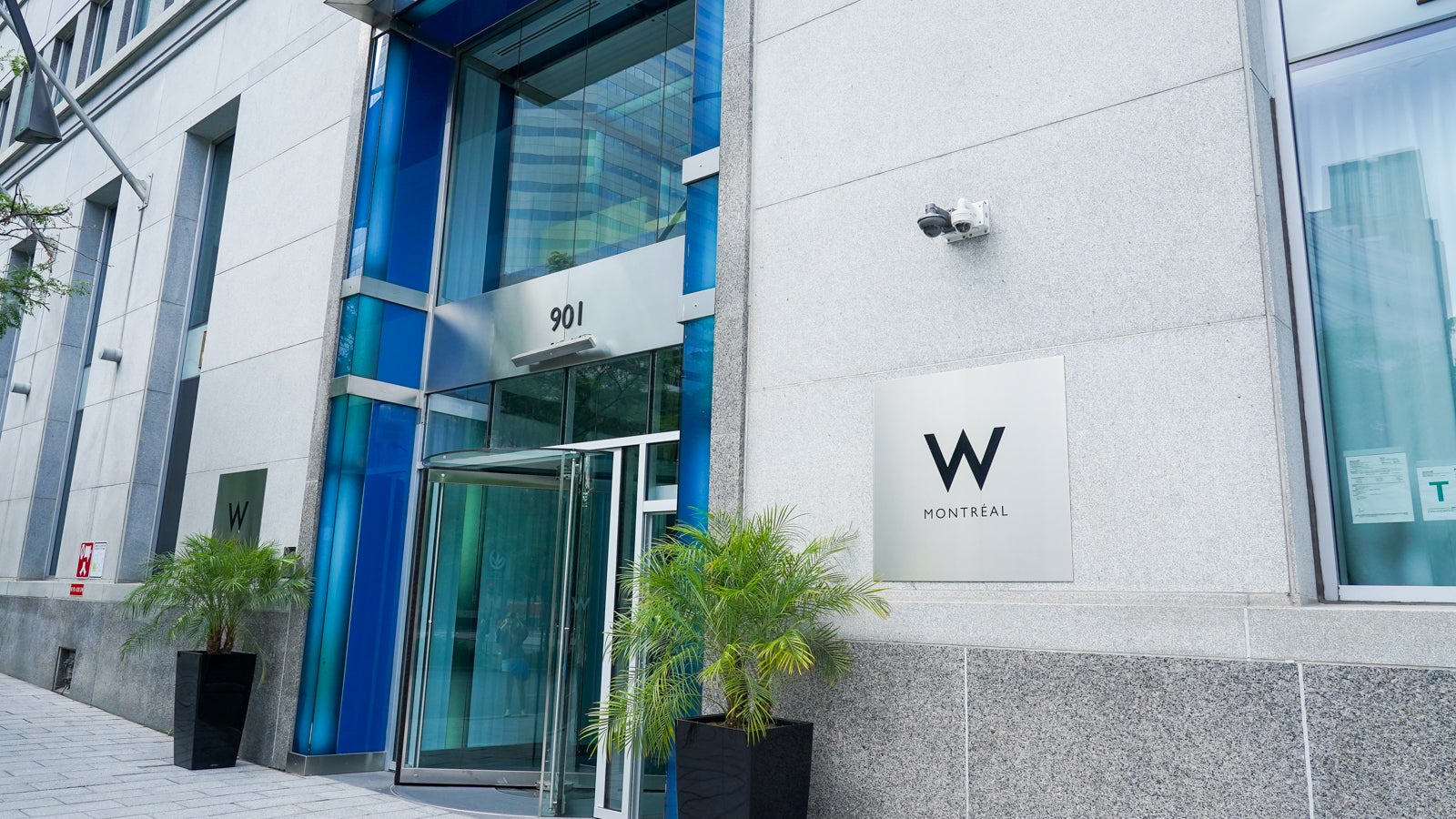 Prior to a work weekend with a co-worker in Montreal this year, I had, somehow, never stayed at a W Hotel. I was familiar with the brand, and I'm clearly the target demographic (a no-way-around-it-millennial who travels frequently for work and has graduated from bottom-budget properties to something a bit more stylish).

But when I recited my alphabet of hotel stays, I had to skip straight from V to X.

But in many ways, I am not W's target client, and for this reason, I need to level with you: I may be approaching 30, but I relate more to septuagenarians than most peers. I'd rather stay in and watch a movie in my pajamas than go out in public after 7 p.m., and my idea of a party includes cheese platters and wine spritzers.

Want more tips and tricks for planning a trip to Montreal? Visit our new destination hub here, and check back throughout the week for travel guides, restaurant recommendations and more!

So it should come as no surprise that I didn't love the W Montreal. There wasn't, to be fair, anything I could point to and say, "This was terrible" — well, except maybe the shower — but that's largely my point. And it wasn't all bad, either.

If you've never stayed at a W before and are wondering, "Am I cool enough to stay here?" consider these factors first.

The price is right — sometimes

What I didn't know until after I was already in Montreal was that it happened to be Montreal Pride, which explained why so many hotels were sold out and why everything was so disconcertingly expensive.

On the first night of my stay at the W Montreal, my room cost CA$558 ($425), though the second night was more than CA$100 less expensive (CA$455, or $350). Because a Fantastic Suite was just $30 more expensive than a Fabulous park-view room (the lowest category available during our stay), we decided to splurge. And because I have Marriott Gold elite status through the Platinum Card® from American Express, I was upgraded at arrival to a park-view, bilevel Wow suite with one king bed and a terrace.

Now, a quick aside: The names are ridiculous, and I have a hard time taking W seriously in no small part because they use exclamatory words to describe their rooms. But paying less than $500 a night for a two-story suite with two bathrooms and a balcony is, well, kind of a "wow" moment in travel.

And the W can be a relatively good deal for travelers hoping to stay in a higher-end property without burning through their entire Marriott Bonvoy account. The W Montreal is a Category 6 property that requires 50,000 points per night during standard dates. If you're paying cash, rooms often hover around $247 and $298 when there's not a big event in town. To put things in perspective, the Renaissance Montréal Downtown, also a Category 6 property, is available from $282 on those dates.

Blissfully, you don't pay a resort fee here, so you have to give W credit where credit is due. But this is also the third time this year I've had to chase Marriott for my points (still waiting on the payout from this stay) even though my Marriott number was on the reservation, and I personally checked in and paid for the reservation at the hotel with my credit card.

I don't care who I'm staying with: When I wash my hair and shave my legs, I like a bit of privacy. Heck, I'll even take the illusion of privacy. But in my guest room at the W, the shower wasn't just a blue glass box: It was a blue glass box cantilevered over the living room. Whether from upstairs in the bedroom or downstairs in the living room, there was a pretty direct view into the shower.

(Photo by Isabelle Raphael/The Points Guy)Even if blue-glass shower cubes scream "wow" to you, they weren't really great at being showers. The taps weren't intuitive, and I waited close to 10 minutes for hot water. And because there was no door, it actually got quite cold in the shower unless you were standing directly under the shower head.

Bathrooms in general seem to be kind of a crapshoot at the brand right now (especially if, again, your idea of a good scrub down includes nominal decorum and a door).

Next door, there was definitely some sort of bachelor party in progress when we arrived. I know this largely because I could see a group of young men drinking on their patio when I was out admiring the skyline from my own. (See above: privacy). They weren't horrible neighbors, but I could still hear absolutely everything they were discussing through the wall.

Of course, you don't have to be in your room to be bothered by noise at the W. One simply has to stroll past the restaurant-meets-bar-meets-disco for an ear-bleeding blast of beats.

By its own account, the W Montreal's single bar and restaurant, Bartizen, describes itself as a venue with "subdued lights and deep house music."

Frustratingly, some of Montreal's nicer hotels are in the city's least-desirable neighborhood, and the W is no exception.

Though it's conveniently near the train station — in the event you're inspired to take the long-haul, 11-hour train ride from New York City, for example — it's not in an especially fun or pretty part of town. If you'd rather not rely on Uber or long walks to reach the hipper parts of Montreal, book a room at a property in the Plateau or Mile End instead.

Maybe it's just me, but nothing feels less luxurious than a stiff, gold faux-snakeskin sofa and a faux-dog-fur throw (yes, I said dog). Need I say more? Probably not, but here we go:

W Montreal refreshed all its guest rooms and suites in 2015, and based on a wormhole I traveled through on TripAdvisor, photos from before the renovation prove the current design is a massive improvement. But it still feels like a property trying too hard to be cool, something I hope the property figures out how to avoid during its next iteration.

In addition to fake fabrics, the W Montreal property struggled with negative space and balance during our visit. All of the furniture somehow seemed too big for the room or just not quite right, and much of it wasn't very comfortable.

There were high ceilings and tall, white walls, but not much to look at. I was also perplexed by the overall aesthetic (blue Plexiglas, bright yellow cabinets, gold pleather, faux-marble-print wallpaper), but everything I own is from Ikea, so maybe this is what is cool now.

You don't need to pack your own amenities

My absolute favorite thing about the W were the in-room amenities. There were pillow mints by the bedside along with bottles of water, and the bathroom had every imaginable Bliss toiletry: foaming face wash, body wash, shampoo and conditioner, toothpaste, a loofah, moisturizer.

There was a minibar stocked with wildly overpriced but really thoughtful extras, such as a Harry's shave kit and a phone chargers (plus, of course, snacks and full-size bottles of liquor). There was even a Nespresso machine. These are the details that actually elevate W to the luxury space, not the excessive use of gold but the array of amenities available for guests.

At the small but functional glass-top desk (with what else but a gold snakeskin office chair), there was a wireless charger for phones and an organizer with paperclips — even a Bluetooth keyboard.

Downstairs in the basement, guests could access a gym with refrigerated towels and every piece of equipment you'd need for a workout, such as free weights, medicine balls, ellipticals, treadmills and stationary bikes.

Even though the W brand isn't for me, I can't say I wouldn't choose this brand — or even this property — for a future stay.

Based on my experience at the W Montreal, I know for sure I'm too uptight for some of the design choices. But for leisure trips on the right days, it can be hard to say no to a full-service, upscale property.

Featured image by (Photo by Isabelle Raphael / The Points Guy)
Editorial disclaimer: Opinions expressed here are the author’s alone, not those of any bank, credit card issuer, airline or hotel chain, and have not been reviewed, approved or otherwise endorsed by any of these entities.