Visiting Lake Tahoe on a Budget, The Sequel

Visiting Lake Tahoe is a treat for those who make the journey out West. The crystal clear blue water, the tall trees, the massive rocks, and even some springtime snow make for a joyful experience that can be enjoyed even on a budget. Here are Grandpa Points’ thoughts on their recent return to Lake Tahoe…

About twenty years ago we saw Lake Tahoe for the first time. We were driving in from Reno and caught a glimpse of this blue jewel sparkling through a green forest of tall, sweet sugar pines. We stopped the car in a small turnout and scampered down through the trees to a clearing that allowed a clear line of sight to the lake. To say that we were impressed would be an understatement of massive proportions. We were awestruck. That first image was followed by an entire day of glorious exploration of unrivaled scenery experienced under perfectly clear skies and in that special refreshing feeling offered only by crisp mountain air.

Ever since that day, a return to Tahoe has been like a long-awaited and much anticipated sequel. When a ridiculously low $19 each way Frontier fare from Austin to Reno popped up in our e-mail inbox last month, we jumped on it with the speed of flight. 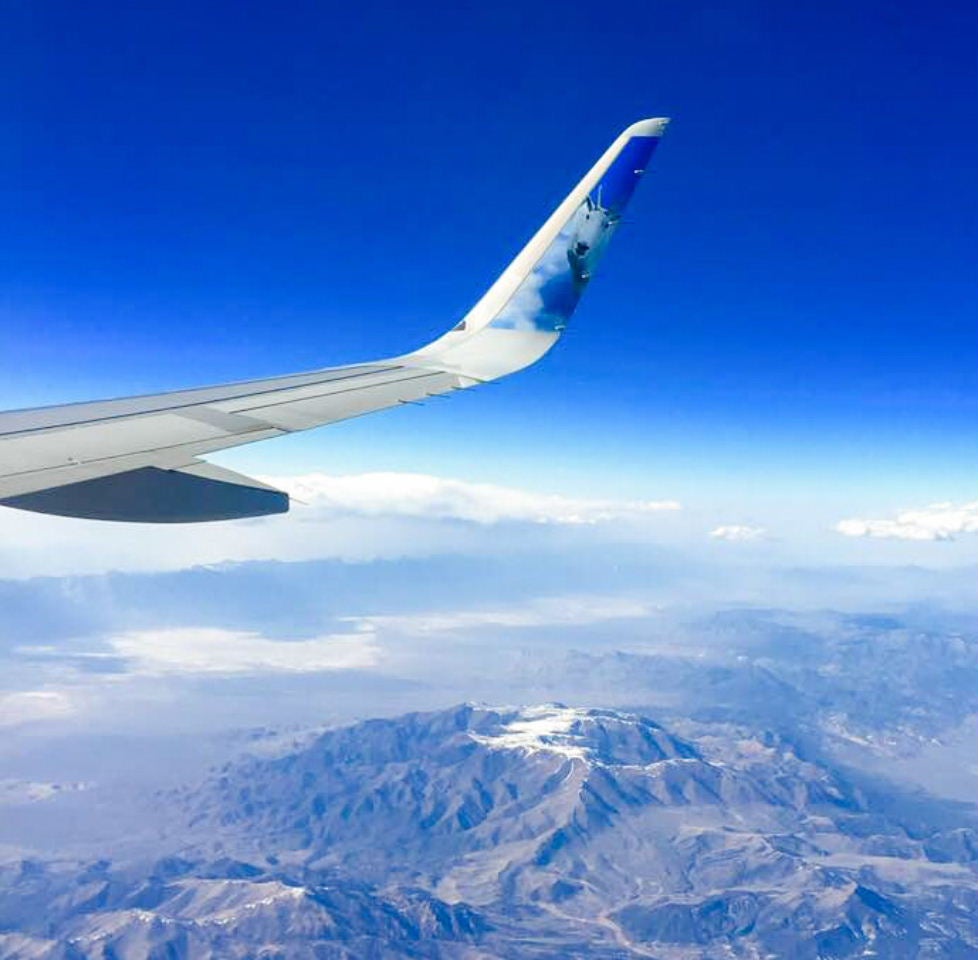 Our four-day visit to this California and Nevada border region included visits to Virginia City, Carson City and the ghost town of Bodie. We saved our time in the immediate Tahoe vicinity for the last two days of our trip. We entered from the south coming up Highway 89 over Luther Pass to Highway 50. We found Highway 89 to be a beautiful and scenic byway that was a classic mountain pass in that it was both rewarding and occasionally challenging.

During our early May visit, Lake Tahoe greeted us with mostly cloudy skies, gusty winds and off and on snow showers. The less than ideal conditions did not prevent the Lake from conjuring up some visual magic and memorable images as the day turned from afternoon to evening. The sun, the clouds, and the lake joined together to give us a stunning and dramatic alternative to its usual blue and green radiance. 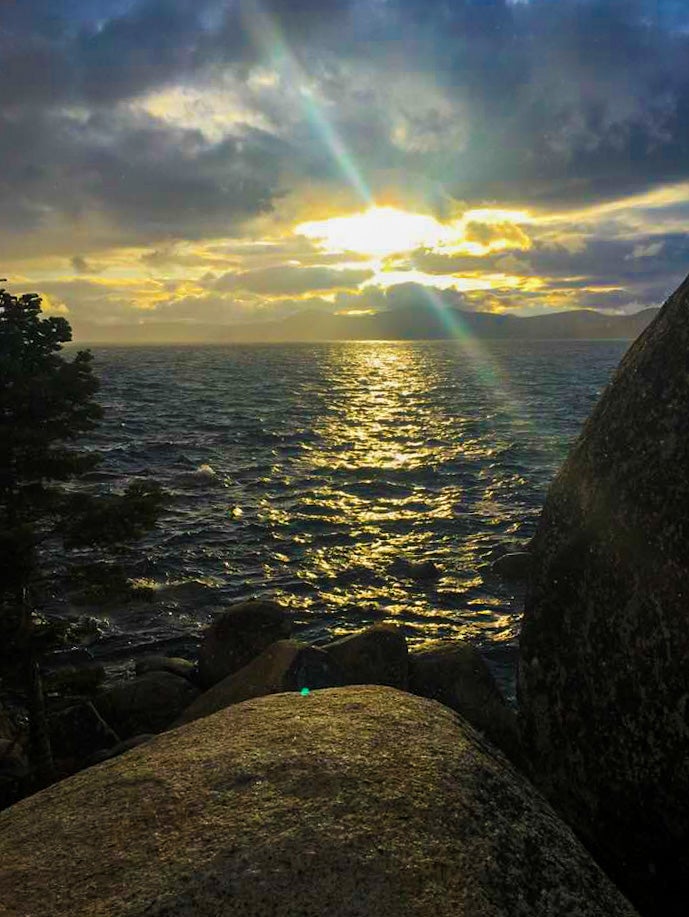 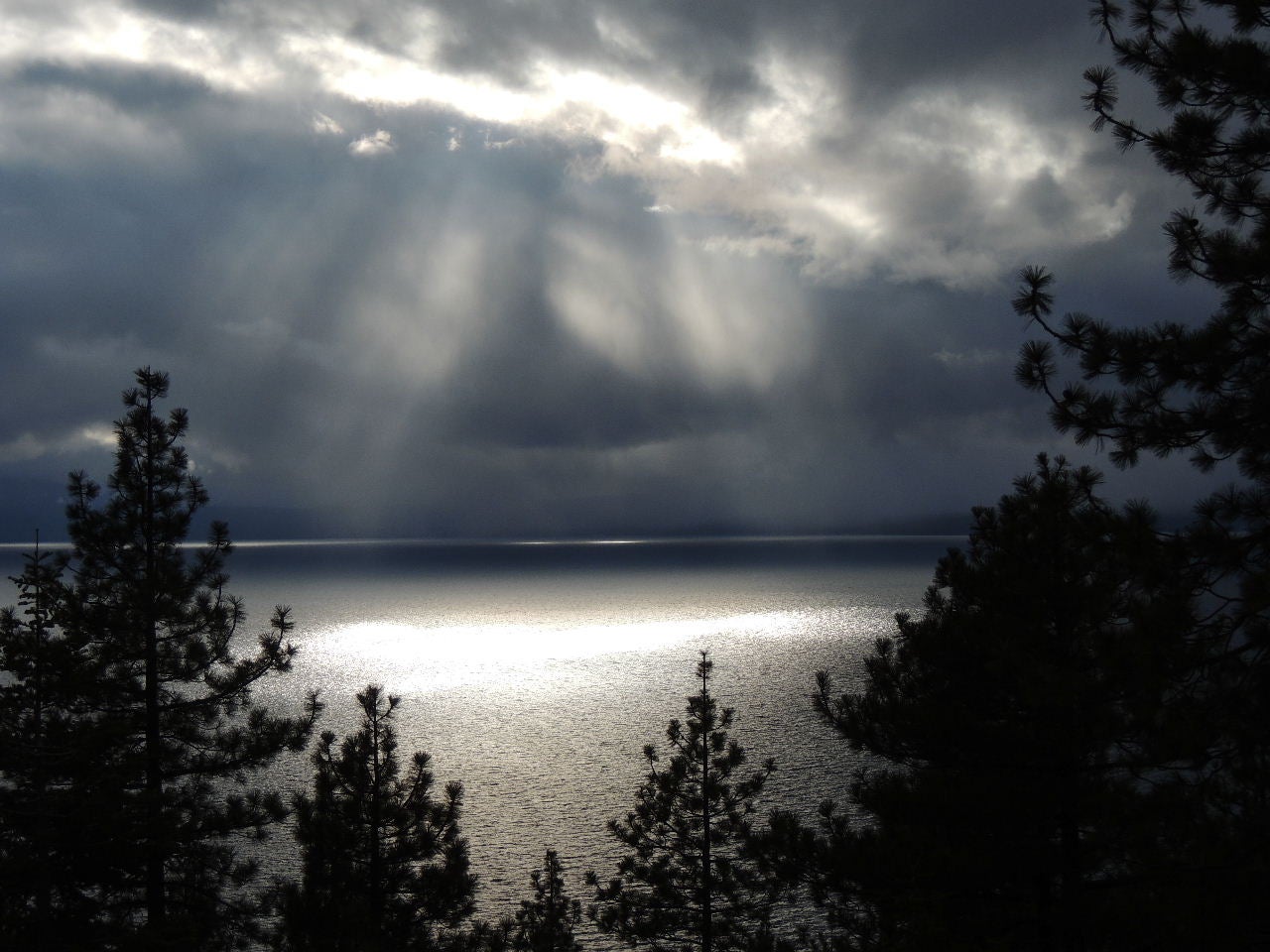 Crepuscular rays bolted through the clouds creating a spectacular background for a spotlighted lake. It was as though the lake was taking a bow, a curtain call, as it went dark for the day.  We viewed it as both a conclusion and also a promise that tomorrow was only a few hours away.

Lake Tahoe is a large and deep lake. It is the second deepest in the United States bottoming out at over 1600 feet. Its surface volume trails only the five Great Lakes. Lake Tahoe is 22 miles long and 15 miles wide. The entire circumference is driveable on roads that are generally open year round. The driving distance around the lake is about 70 miles with the road being at times a shoreline drive and at times a road through pine forests on the slopes of the surrounding mountainsides. The route takes you through a series of small tourist based towns where time has been allowed to slow down enough so as to reflect the essence of another era. To take this road at anything more than a leisurely pace, would be an injustice to all concerned.

The sun played hide and seek with the lake on the day we made the loop. Whenever a promising view or an inquisitive whim called our name, we would stop our car and get out and explore. We often wonder if we make for good traveling companions with others considering our propensity to stop frequently to investigate and appreciate both the large and small wonders that we encounter. However, one of our stops would surely have been met with a mostly universal approval as it involved a sighting of three black bears. 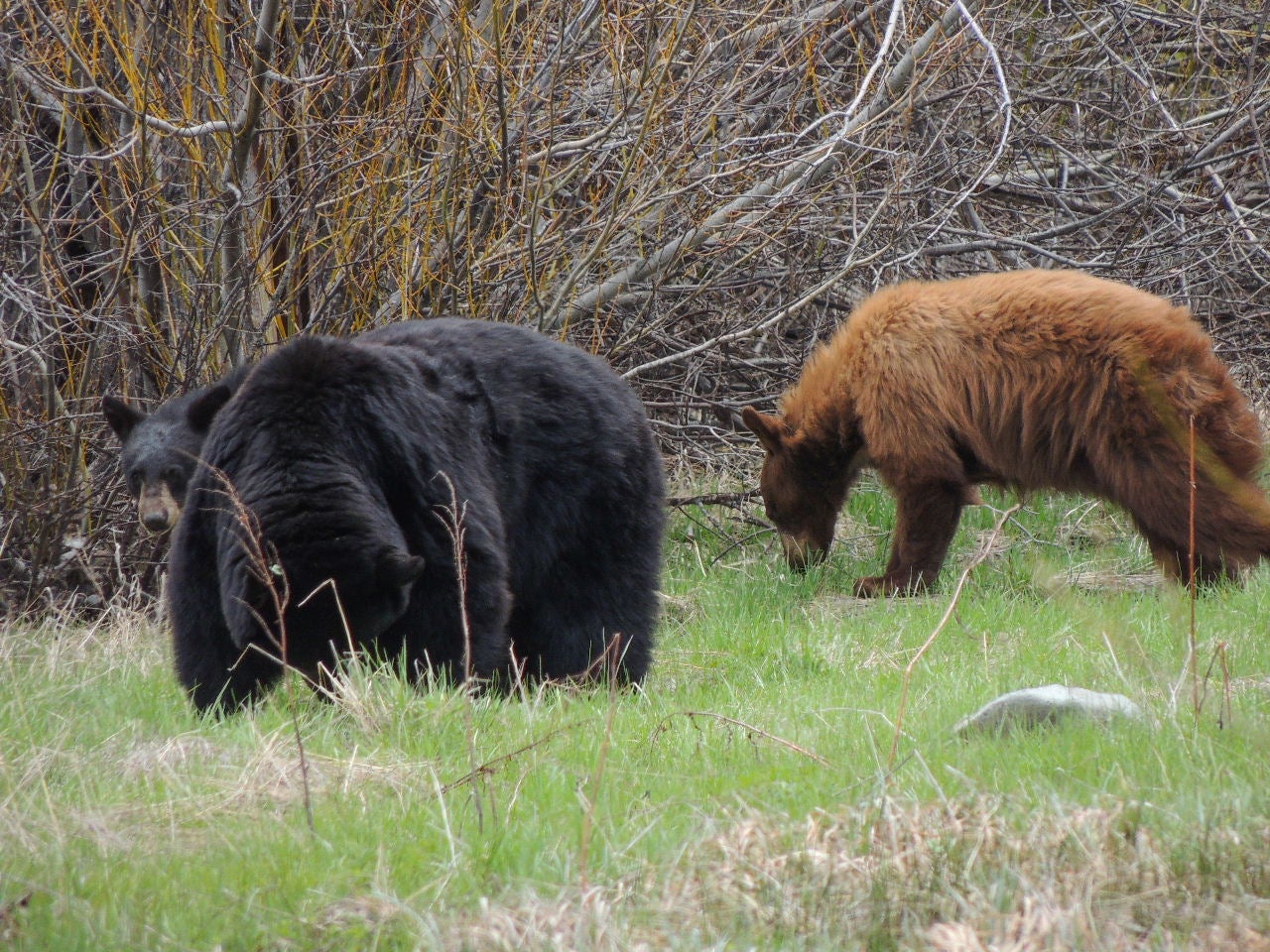 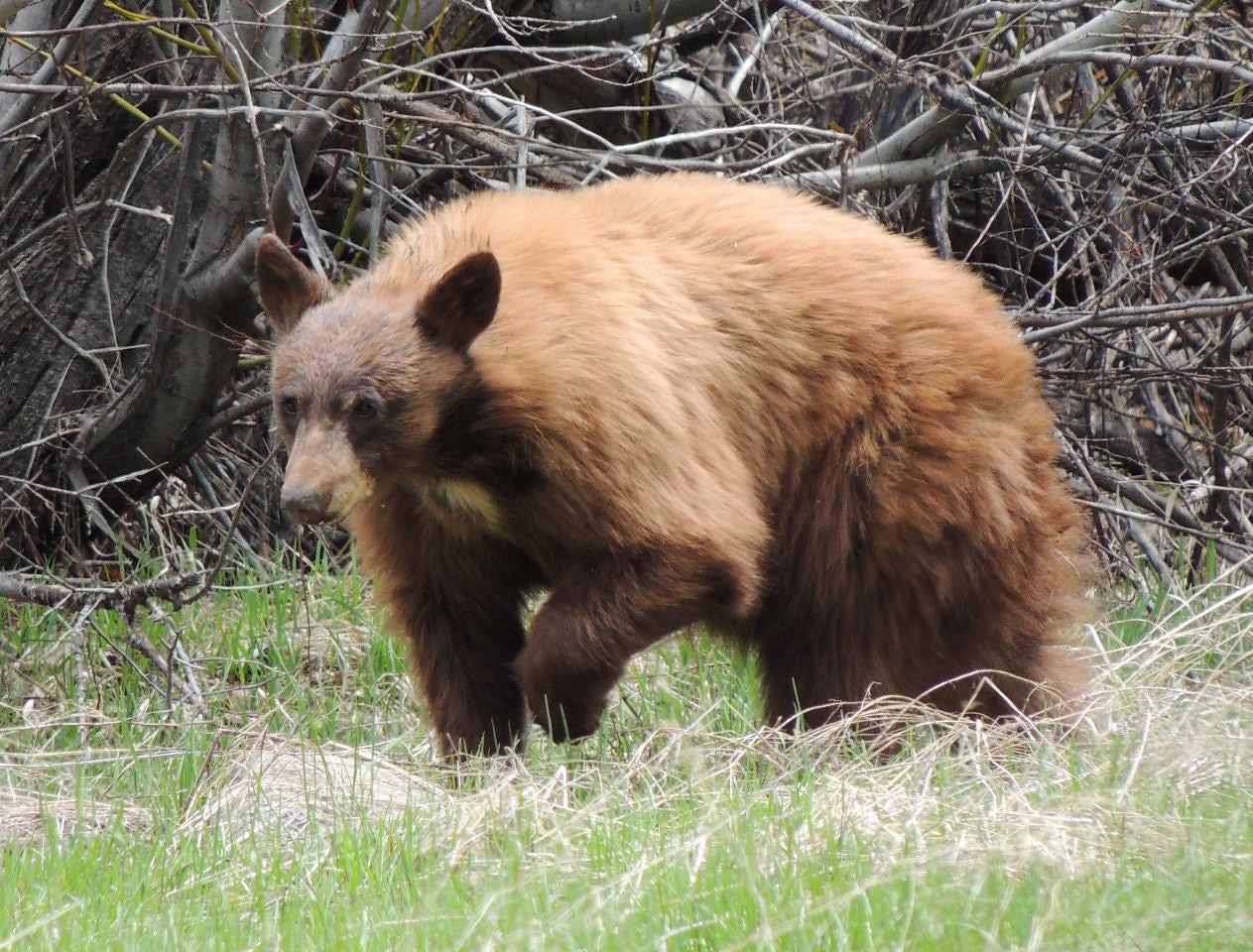 We believe we encountered the part of the fable where the porridge must have been just right as the bears were very busy eating. Our presence 50 yards up on the roadside was of no interest to the bears but their presence 50 yards below was of great interest to us. We watched with respectful awe for about 15 minutes until the trio ambled deeper into the forest and out of view. Did you know that black bears can be brown and brown bears can be black? Well, they can. Aren’t you glad you follow Mommy Point’s blog so you can get the most hard-hitting information?

Around the lake are fourteen downhill ski areas making this area a major schussing mecca. Most of the resorts can be accessed from the road that loops the lake. We opted to visit Squaw Valley, the site of the 1960 Winter Olympics. 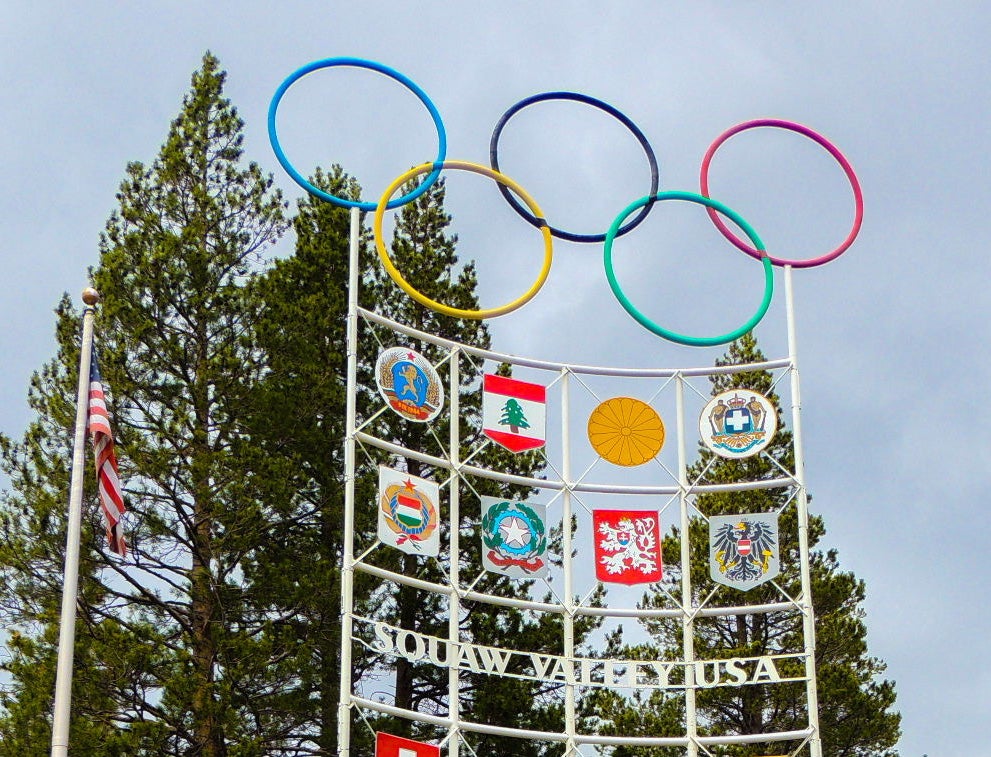 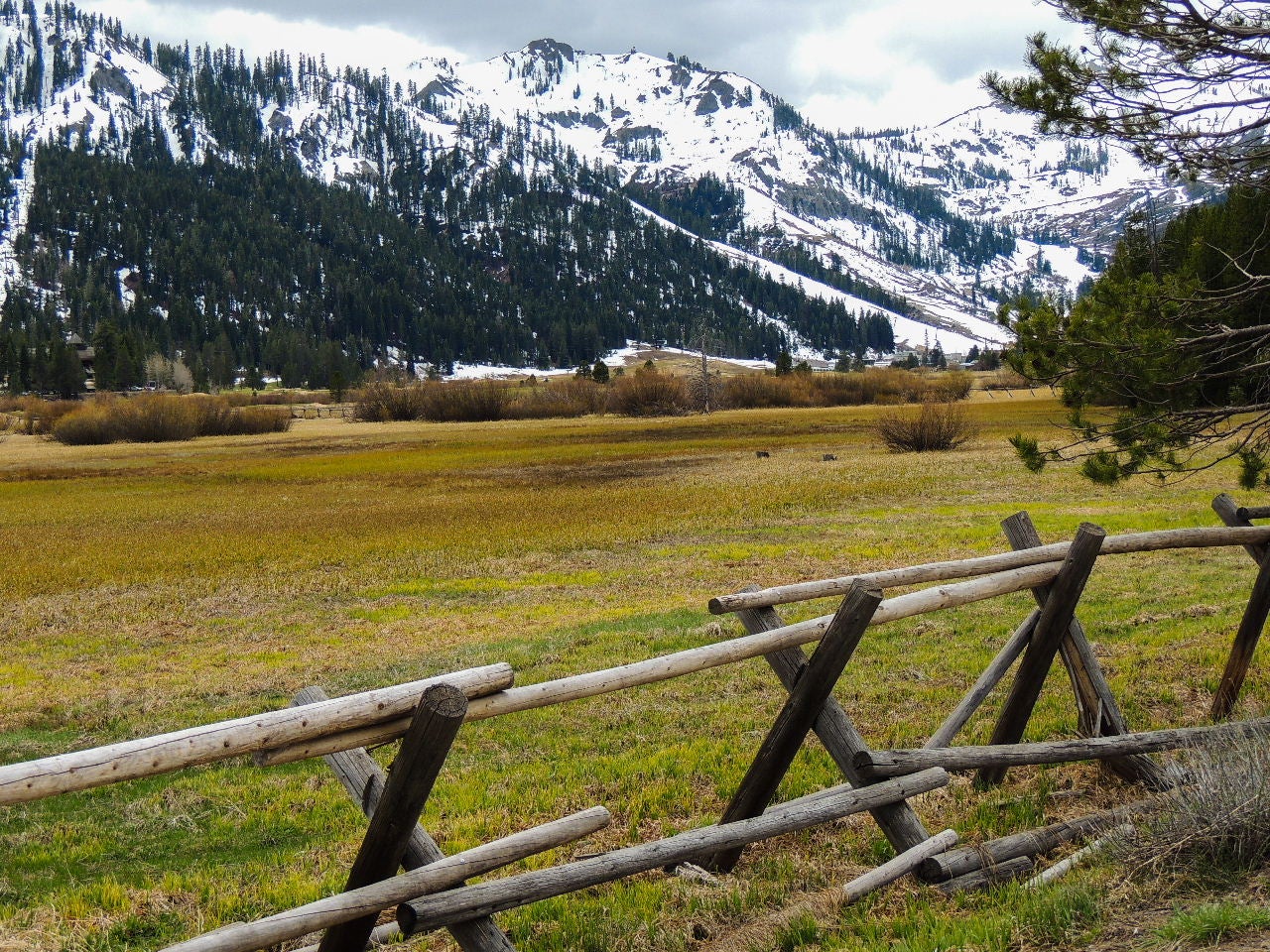 There were a few skiers on the early May day we visited, but our sojourn was strictly out of curiosity to see this historic Olympic site and to hopefully purchase a cool looking shirt. Since I am much older than most of you readers, I have a clear memory of watching The Squaw Valley Olympics with my dad on the black and white television in our living room. My favorite recall was seeing the U.S. hockey team, led by the Christian brothers, win game after game against the powerhouse national teams of Canada, Czechoslovakia, Sweden and the Soviet Union and come home with an unexpected Gold Medal. The victory in 1960 proved to be a worthy prequel to the Lake Placid 1980 Miracle On Ice.

The loop road takes you to several fee-based parks along the way, of which we visited three. The fees ranged from $5 to $10 per car at each site. One of our favorites was Emerald Bay State Park. A collection of huge boulders greets you in the parking lot and gives you a great perch to view the lake, the island and a mesmerizing set of waterfalls nearby. 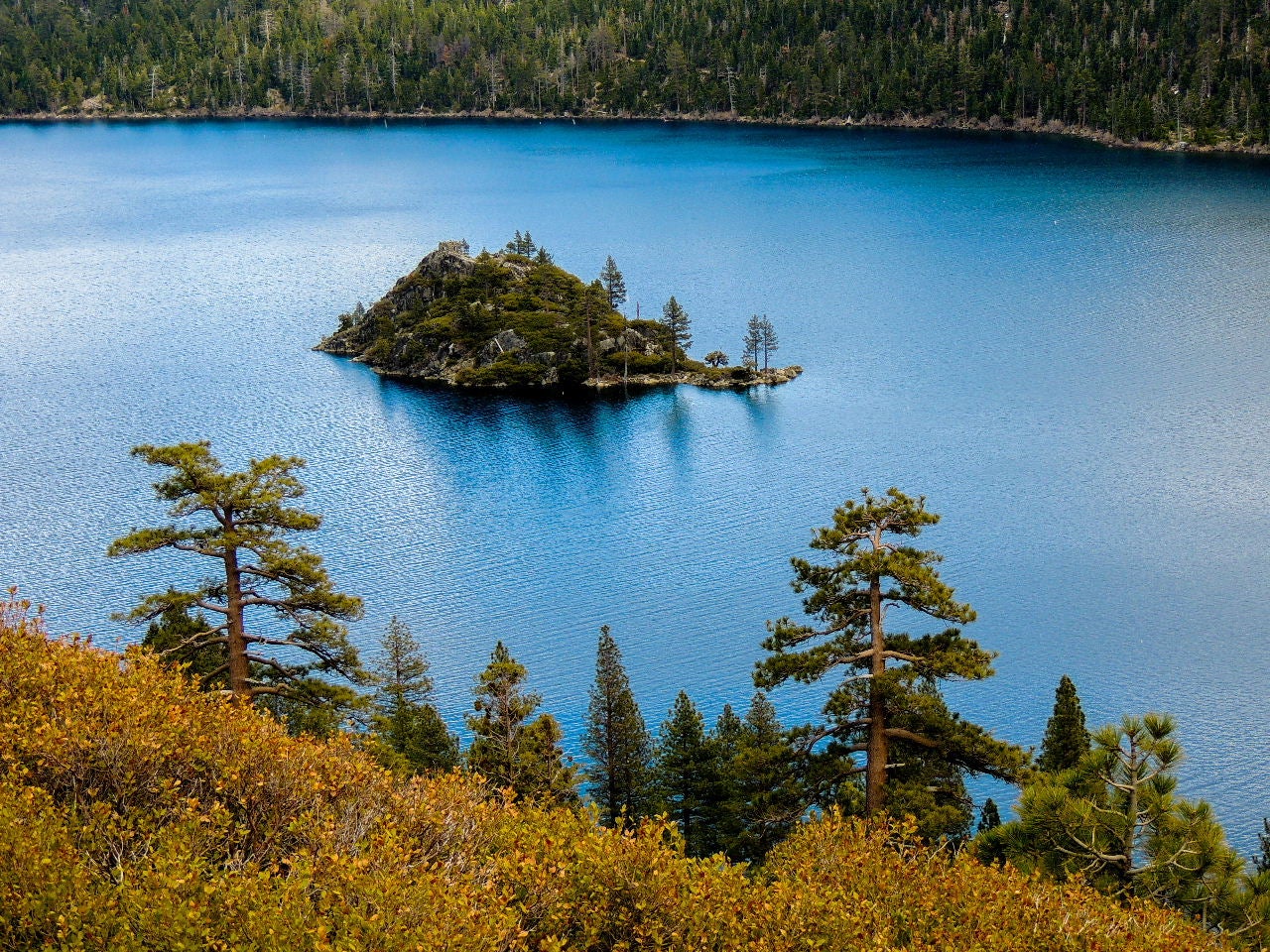 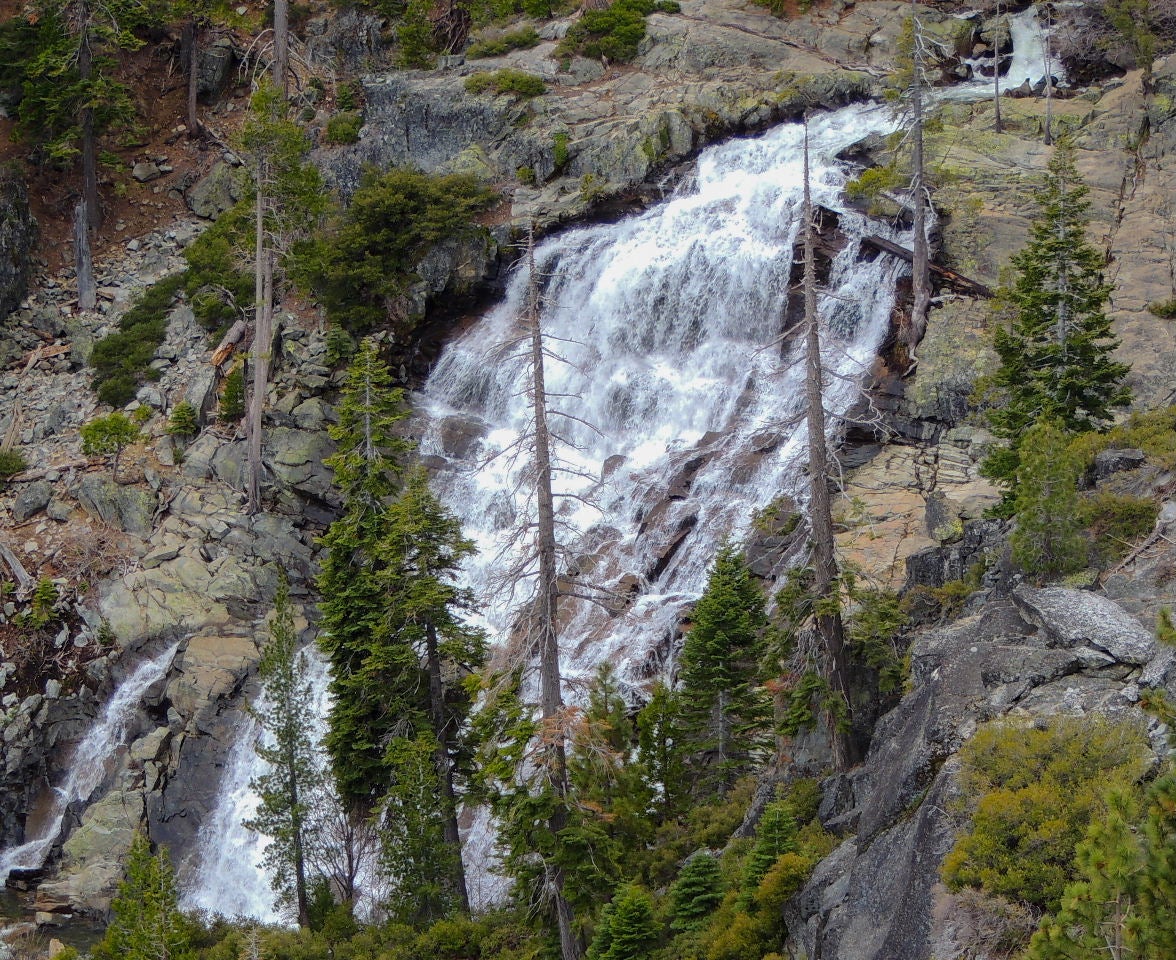 The lake was beautiful and the vistas were inspiring, but we knew Lake Tahoe had more to offer. And the next morning, it exploded. A mostly sunny day with western blue skies and popcorn white clouds were on the menu for our last day at Tahoe and we inhaled these treats at Sand Harbor State Park on the northeast corner of the lake. 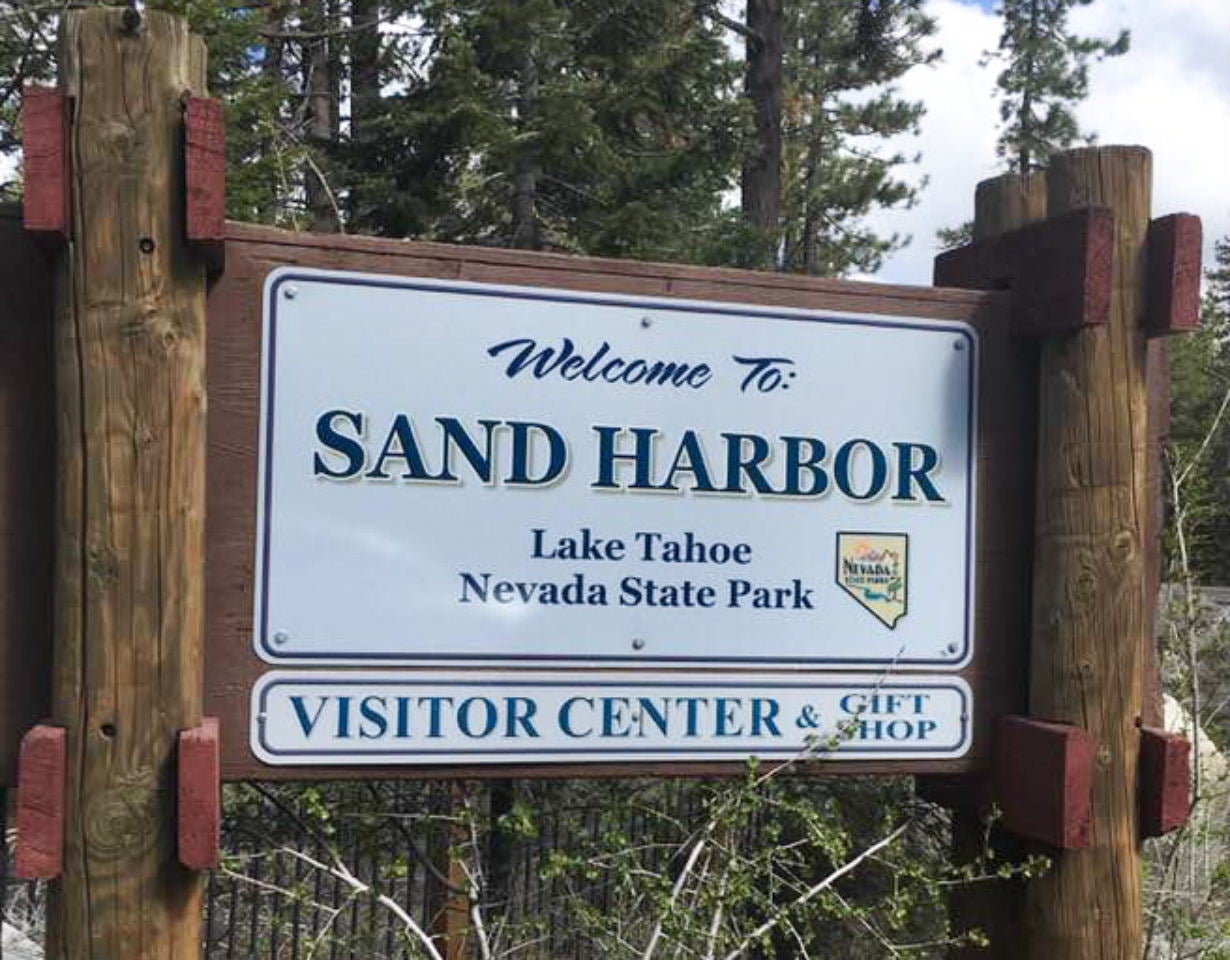 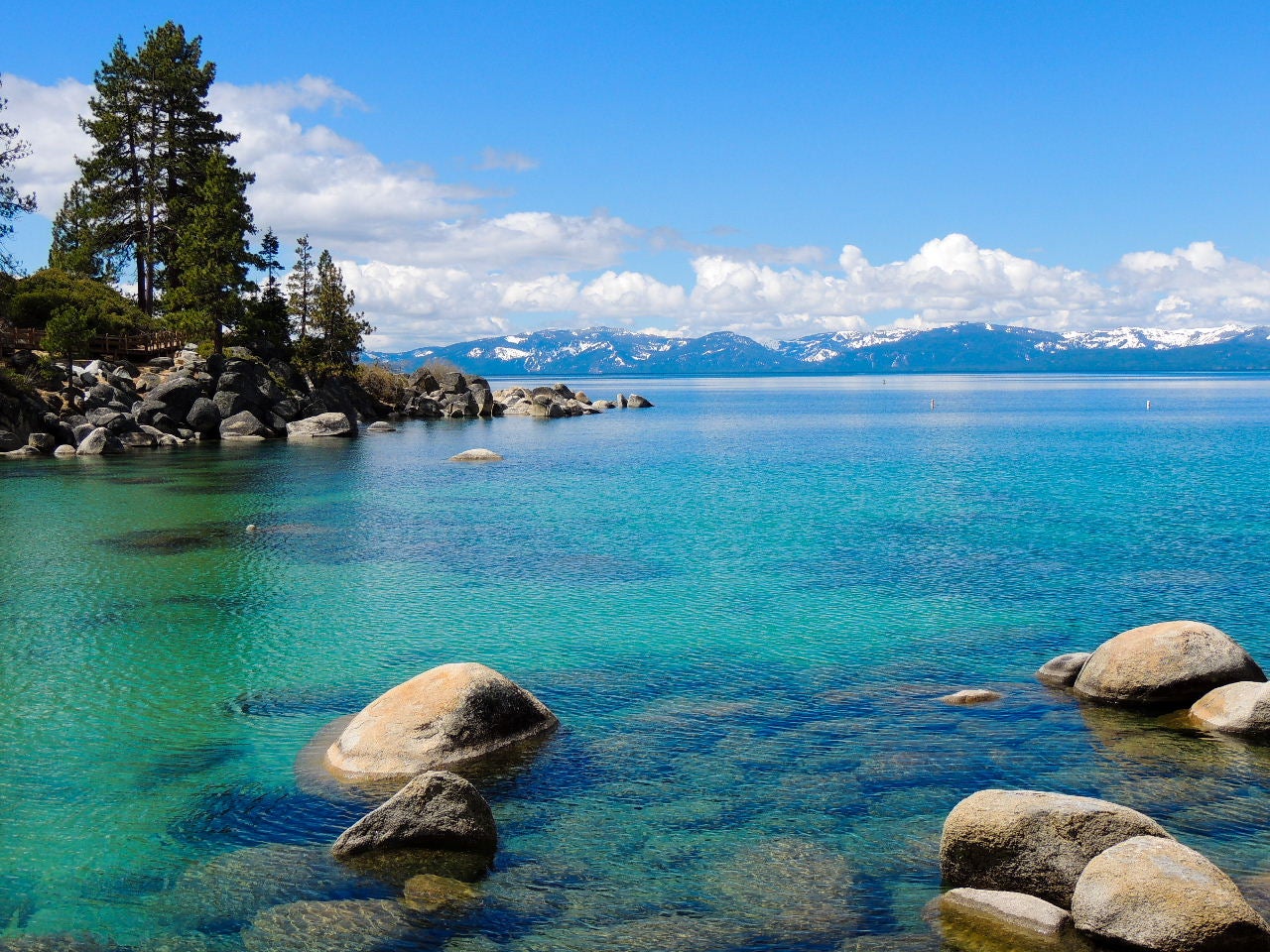 We highly recommend this venue as it gives you great access to the lake and its very best offerings. A long sandy beach, big boulders above and below the clear water, awesome panoramic vistas and colors from emerald to topaz are presented in cared for surroundings with boardwalks providing ease of movement throughout the park. 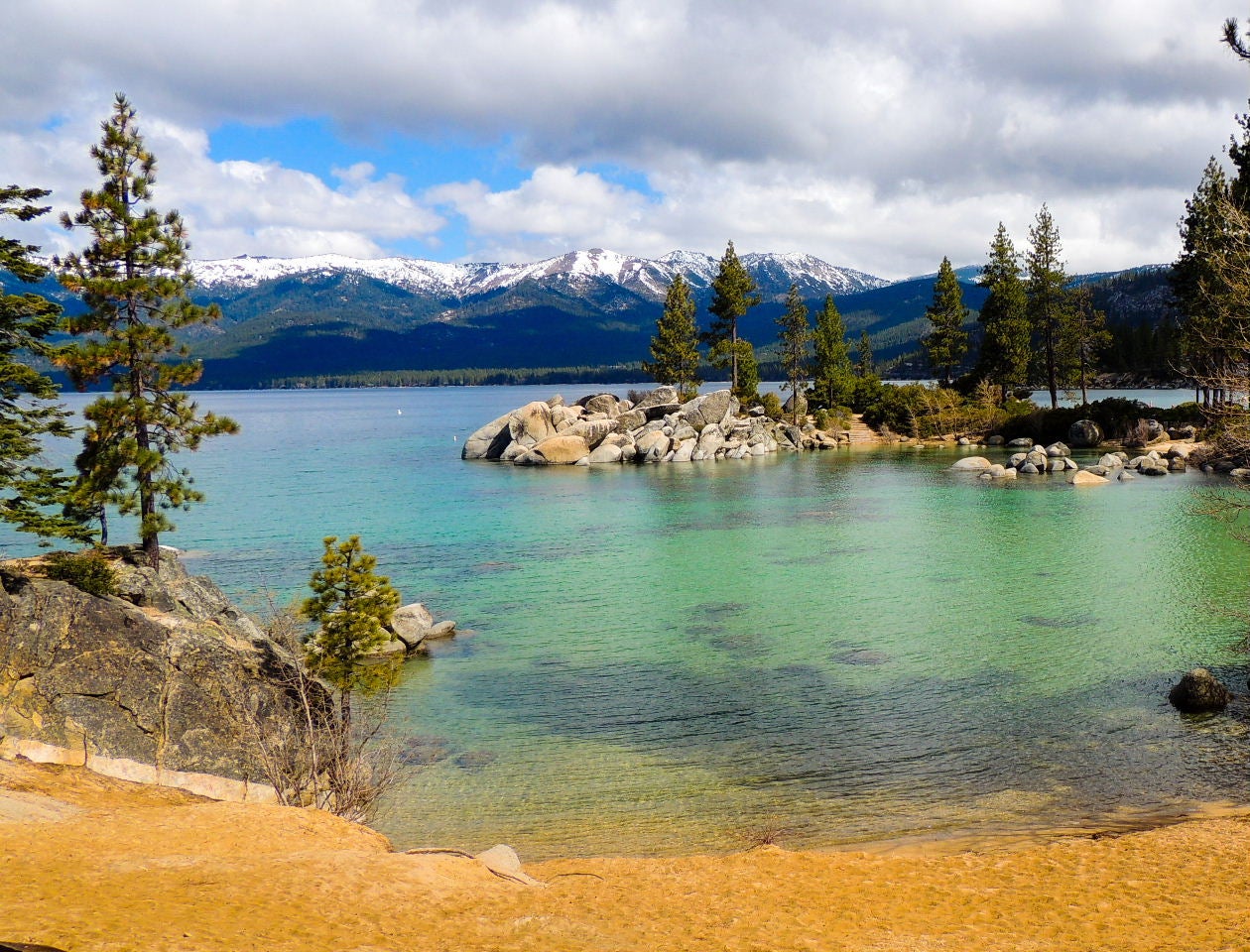 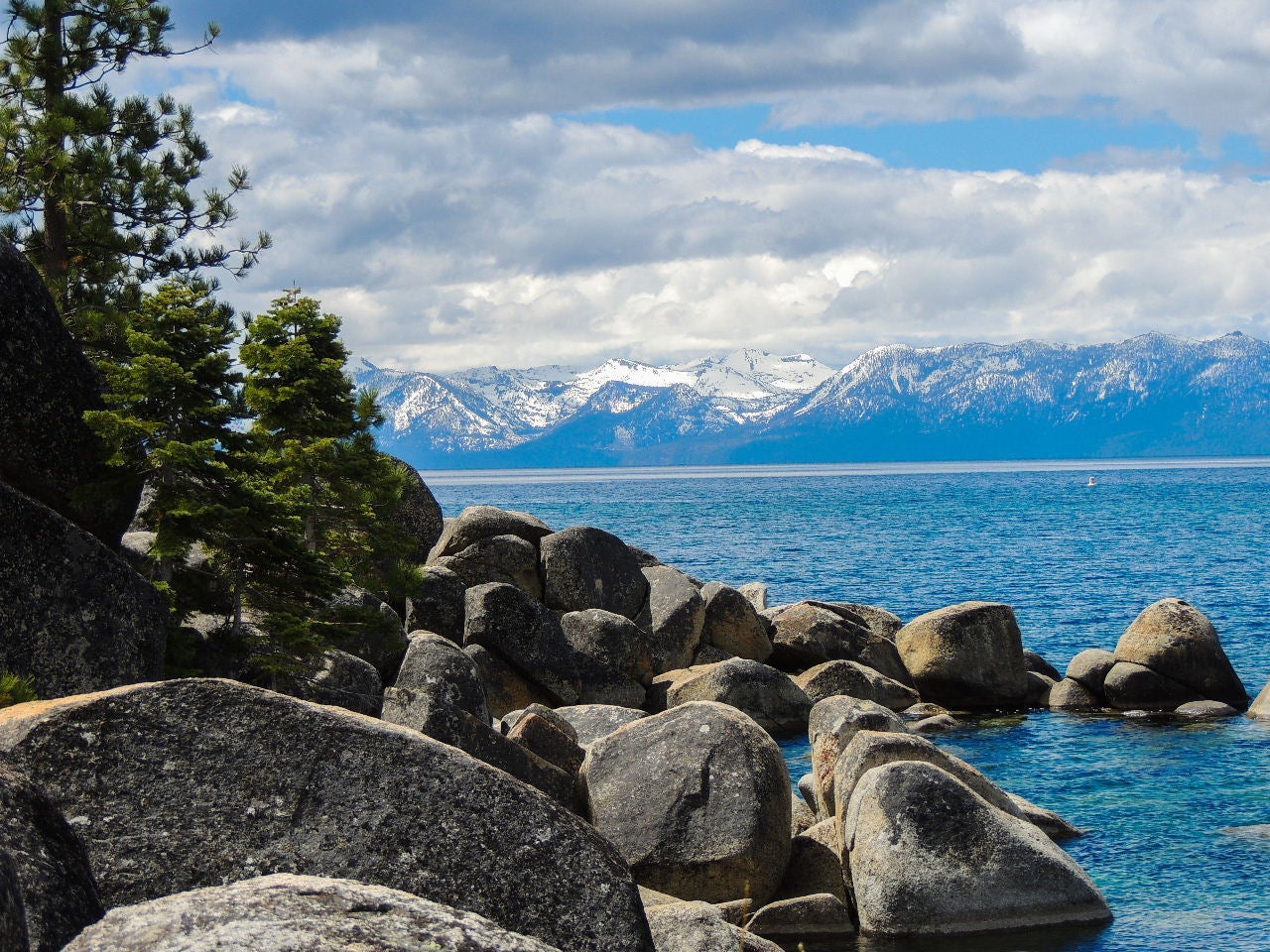 The Sand Harbor Park was abuzz with great photo ops and scenery to smile about as we bounced around the property. 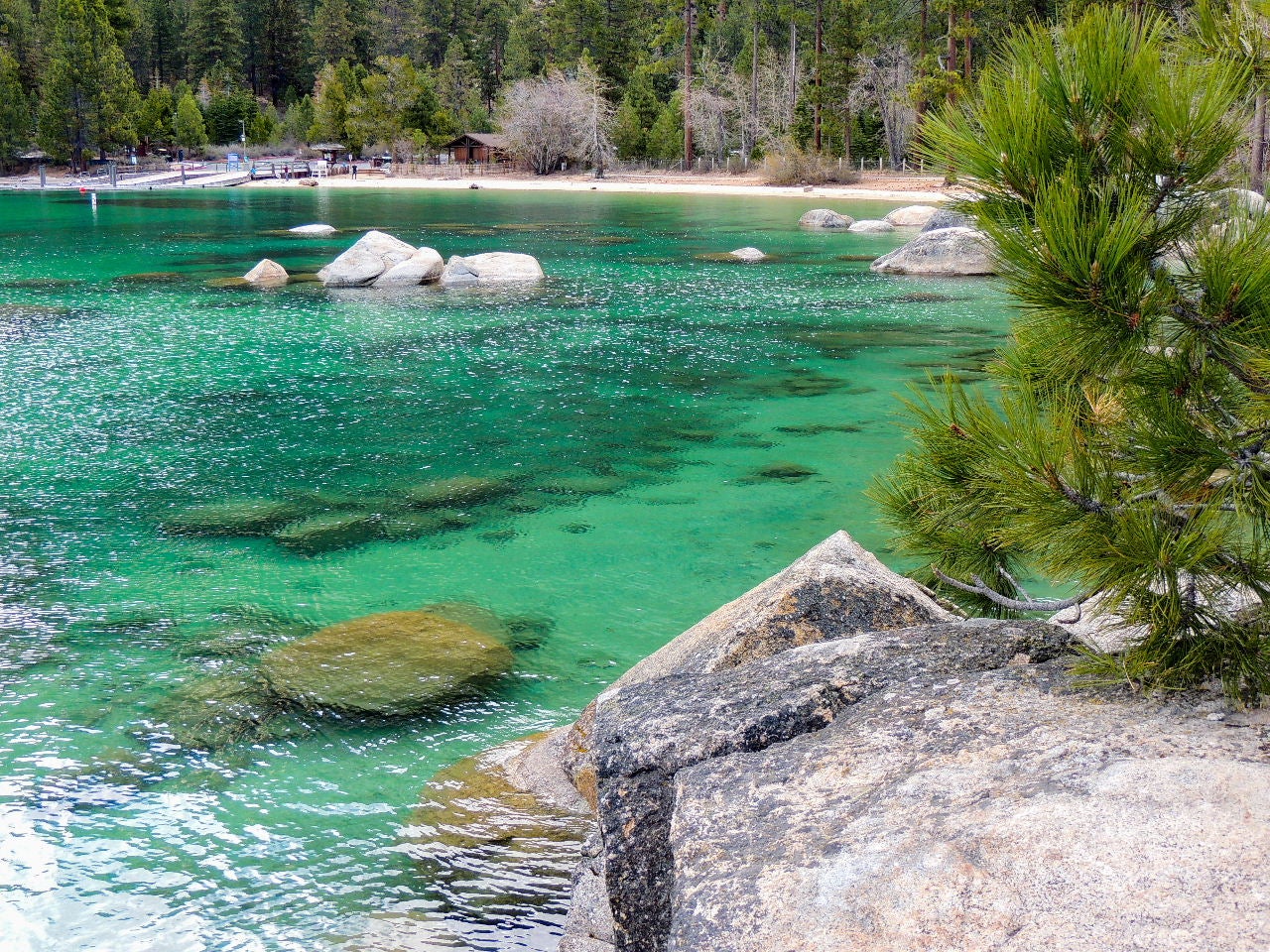 There is a visitors center, gift shop, performance amphitheater, boat launch and clean restrooms available to enhance your visit. But, to us, this was our connection to the Lake Tahoe that we had looked forward to revisiting.

We spent a couple of glorious hours absorbing and enjoying it all before we had to turn our back to the lake and head back to Reno for our flight home. However, as fun trips often do, we were greeted with a few more exciting and unexpected gifts as we drove out on Hwy 431, the Mt. Rose Highway. First came a great scenic overlook of Lake Tahoe that gave us one last look at the aquatic angel and its delicious surrounds. 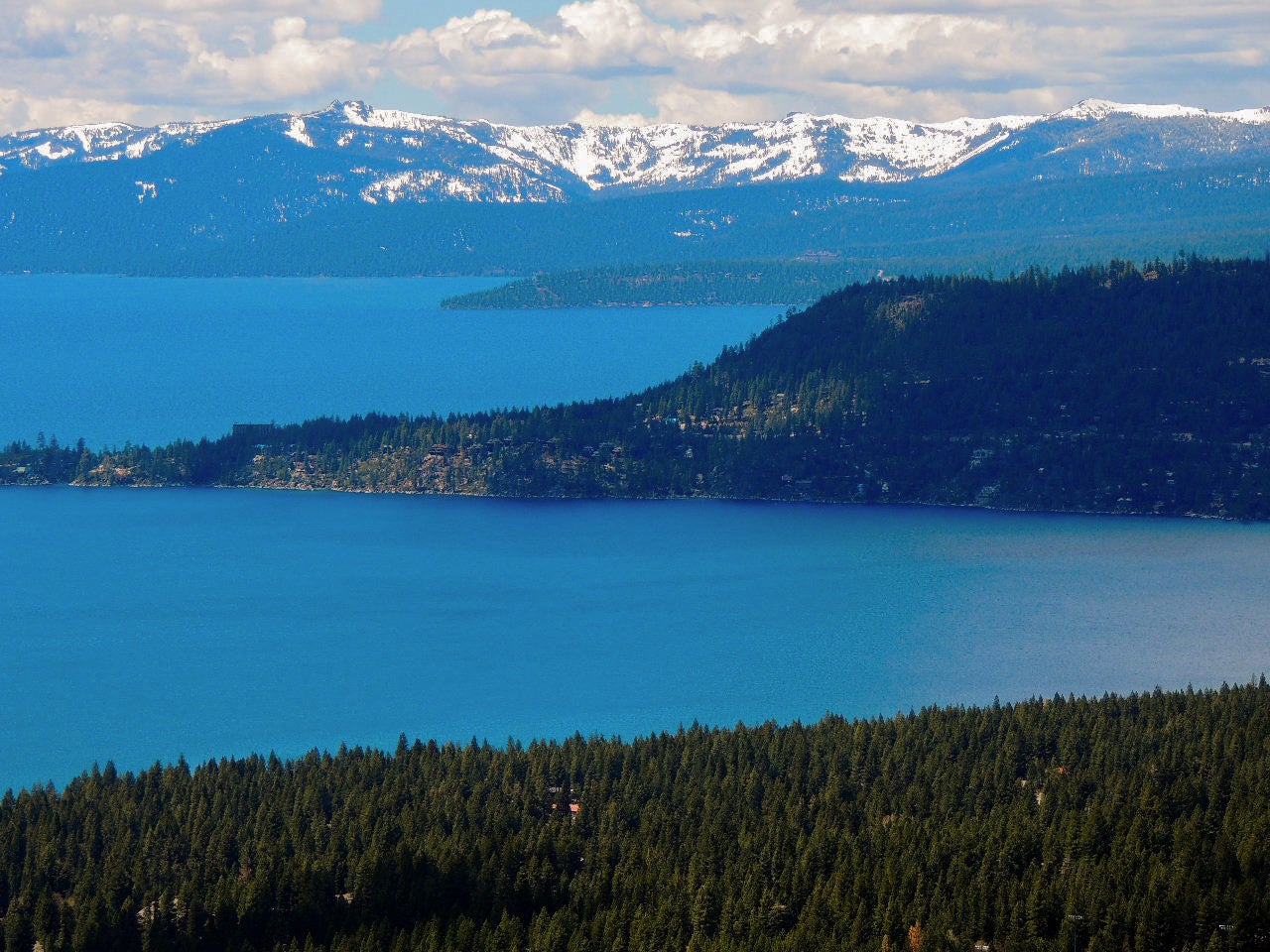 Next, as the road continued to climb, we were met with a lot of snow. Not on the road and not falling from the sky, but everywhere else. The forest and slopes were covered with snow, a lot of snow. 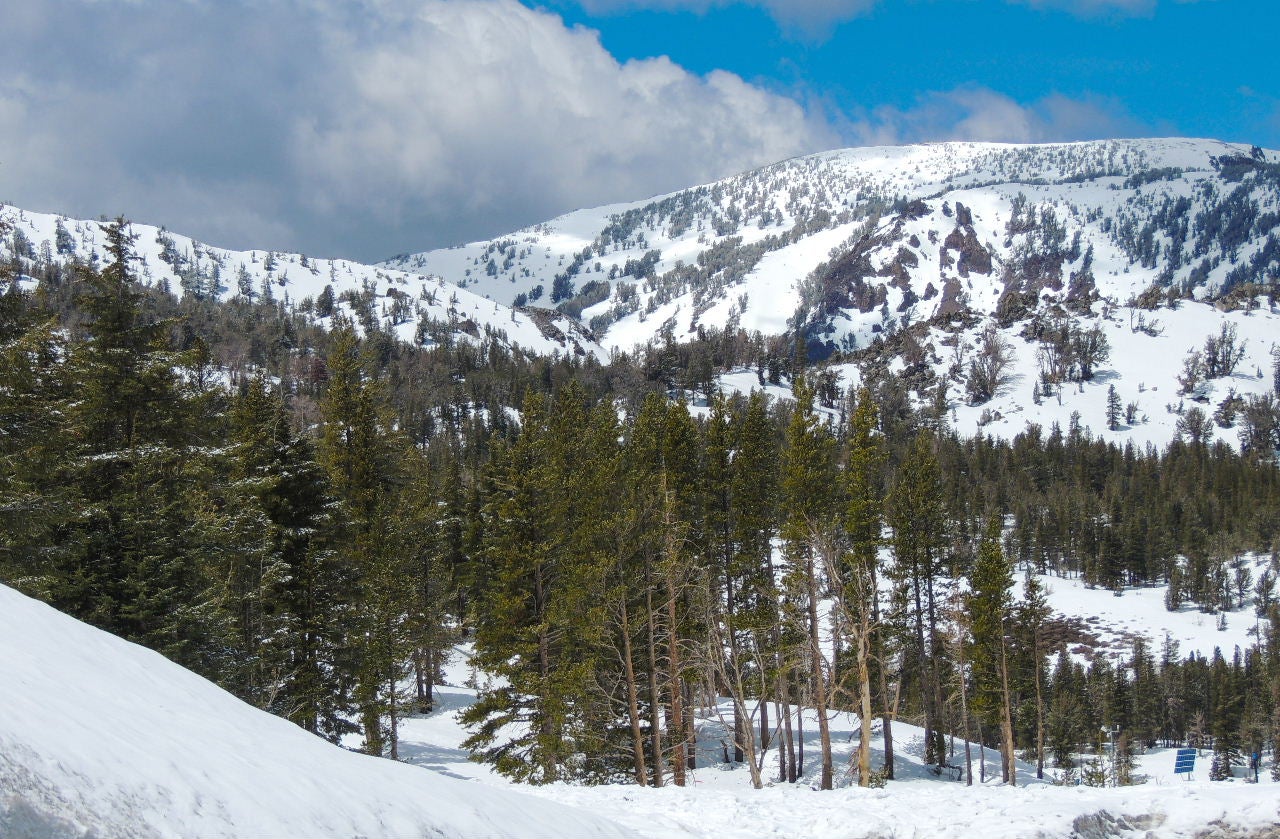 For us Gulf Coast Texans, snow is special. And to experience it in such volume, as we were already knee deep into the heat and humidity of our six-month summer season, was a treat. We were like children. We got out to take photos in it. We smiled about it. We may have even giggled. We definitely giggled. 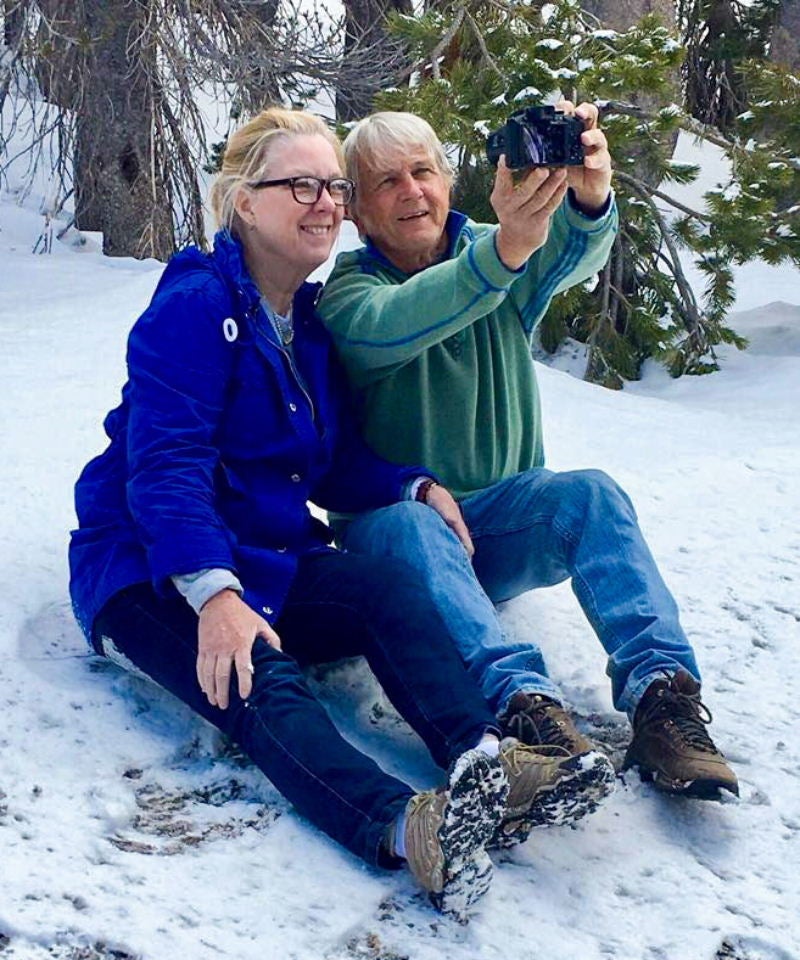 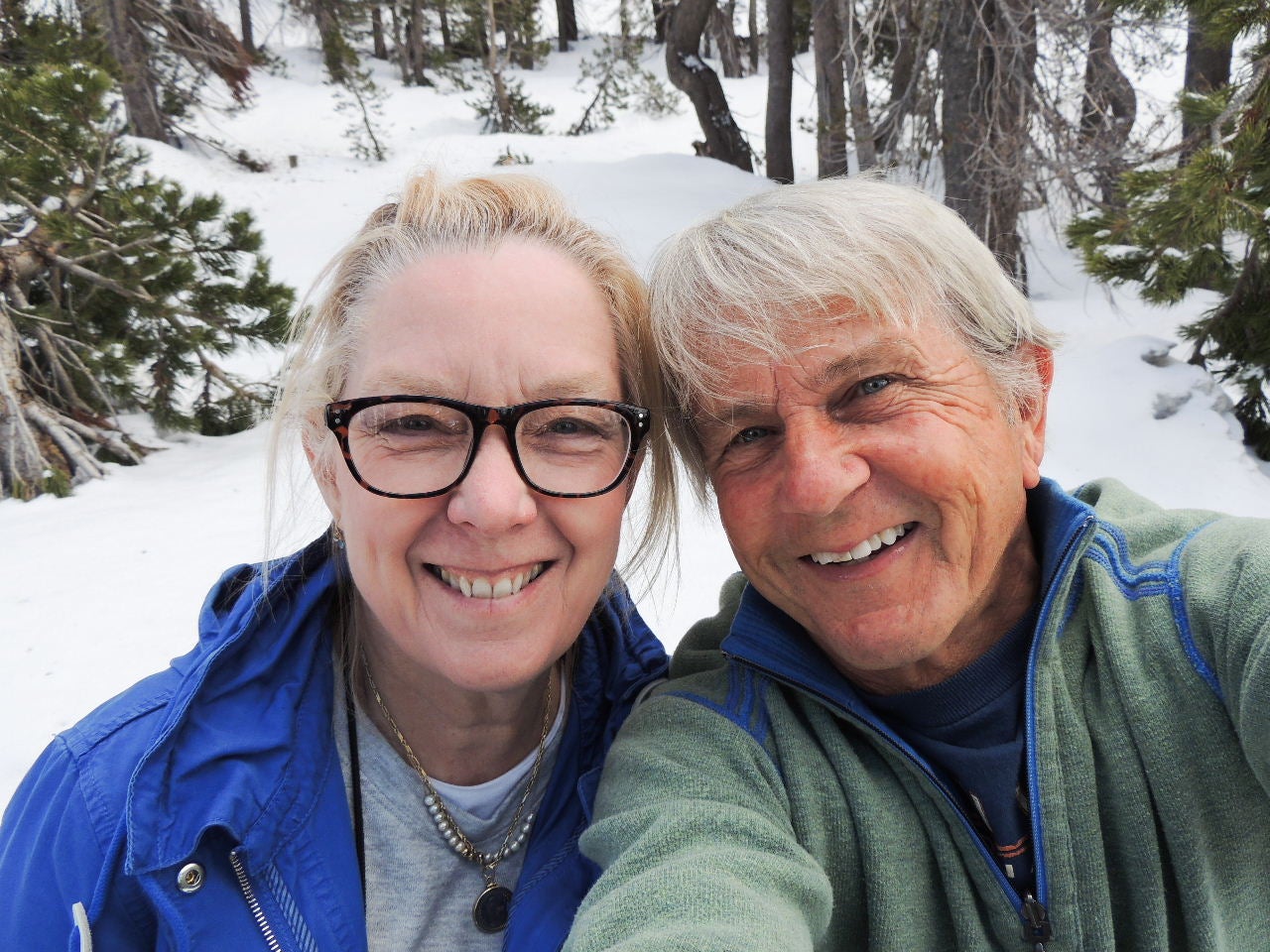 After playing as long as we could considering our approaching flight time, we dusted the snow off our jeans and got back into our car. As we turned onto the highway, Sirius Radio got into the act and, as if on cue, presented us with the perfectly timed and magnificently appropriate Louie Armstrong’s version of ‘What A Wonderful World’. And, it is… a wonderful world. Enjoy and safe travels! 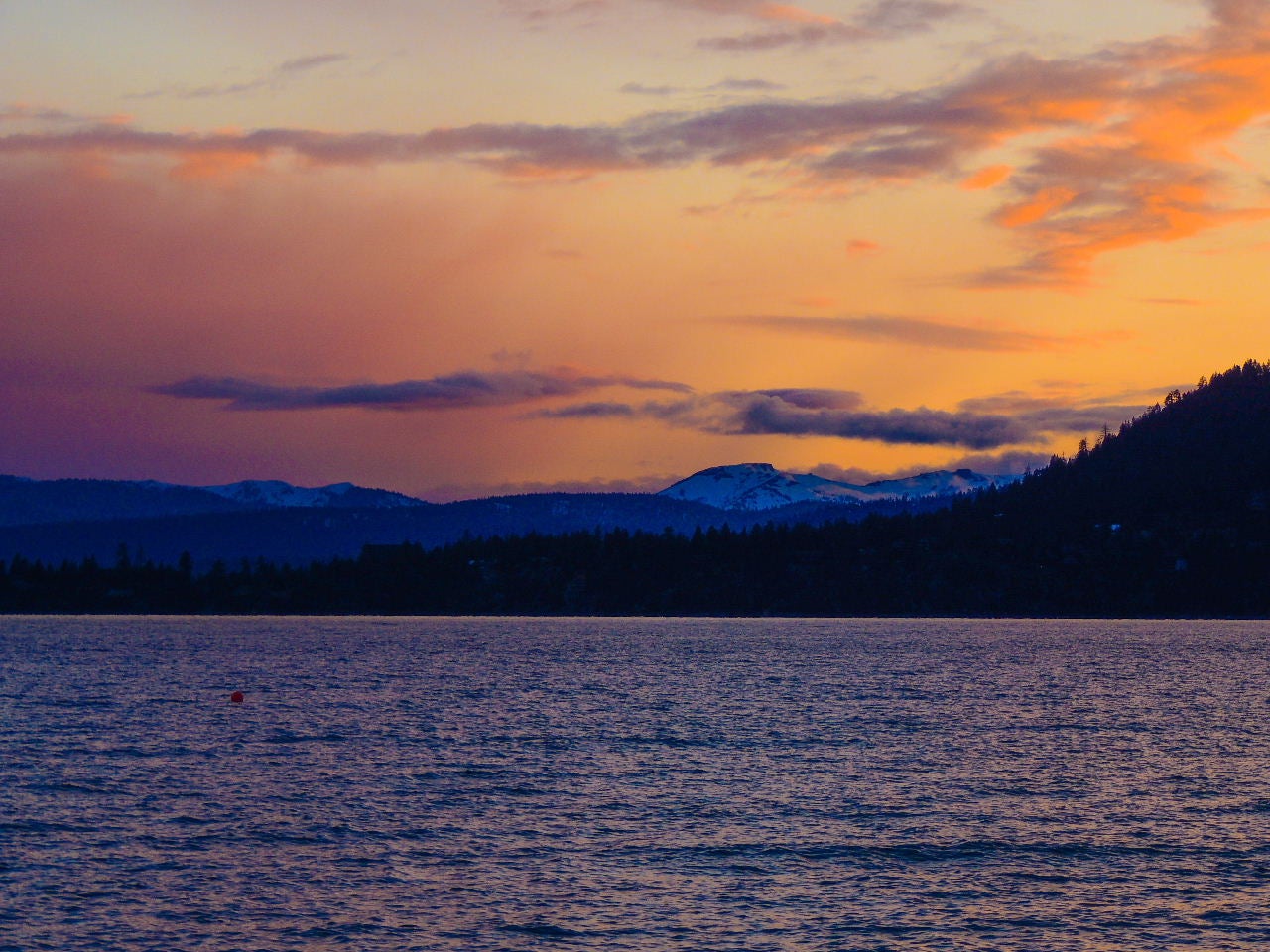 Buddy Smith is a contributing writer for The Points Guy
You might like
Delta will reopen all Sky Club airport lounges by the summer
News
Yesterday
United reports another loss, but thinks better times are just ahead
News
Yesterday
Deal alert: Save 10% on your next RV rental
Deals
Yesterday
Chase Sapphire Preferred® Card