Articles
Mike Arnot is the founder of Boarding Pass NYC, a New York-based travel brand and a marketing consultant to airlines. A private pilot, he can sometimes be found above the skies of New York City.
Follow
Nov. 26, 2019
•
7 min read 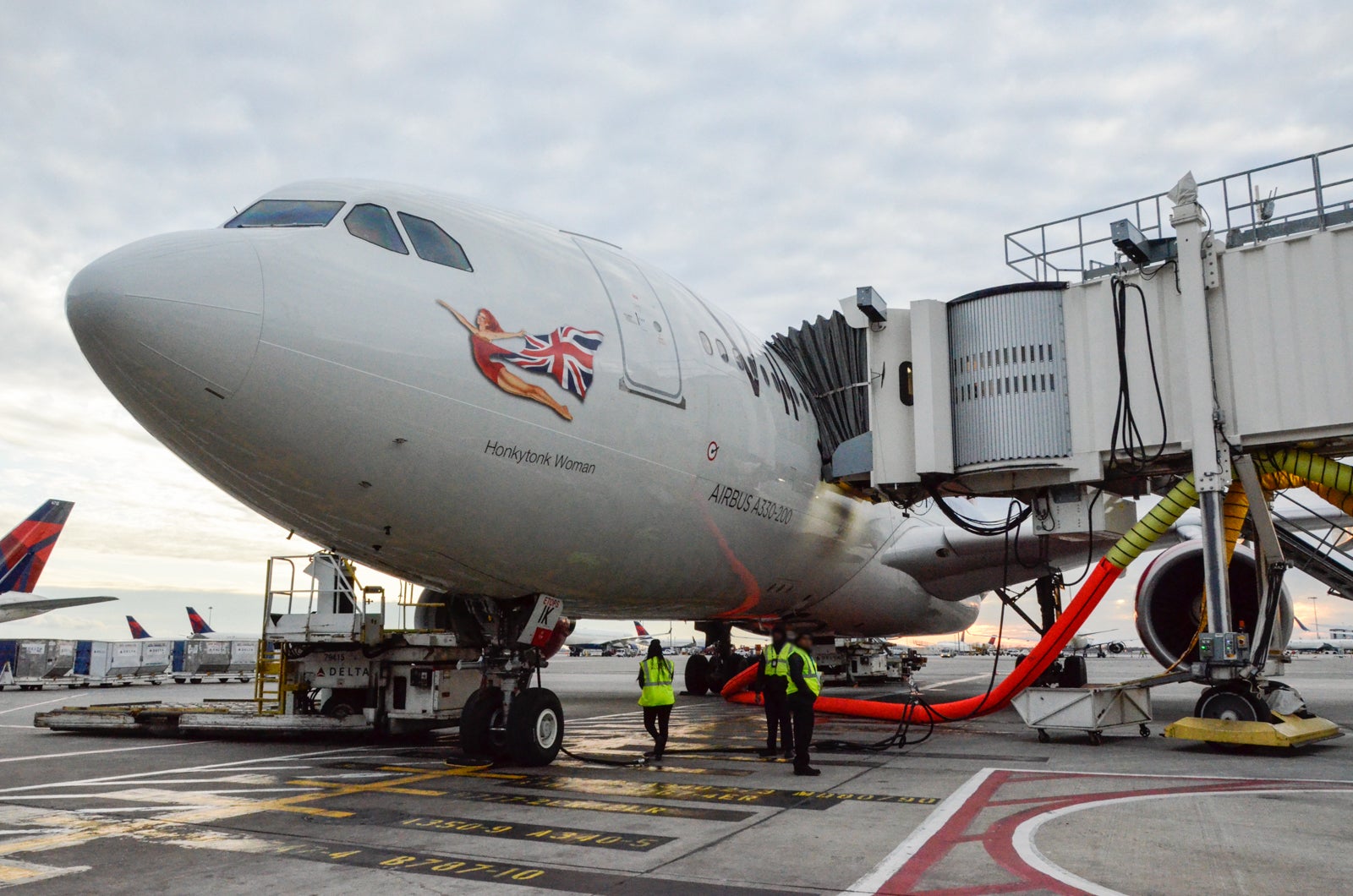 What goes on outside and inside a large commercial airplane to get it ready for its next flight is mostly hidden from view.

We've all watched out the windows of a terminal building to see baggage being unloaded and loaded and aircraft being refueled. But that's just a small part of what is needed to get a plane ready to take off again after a long-haul flight.

To get a close look at the whole process — known as turning around, or simply turning, an aircraft — we went along recently as a Virgin Atlantic team took a plane just arrived at New York JFK from Great Britain and turned it around in less than two hours. The Airbus A330 went from looking well-used to spic and span -- and left early as well.

Here's how Virgin Atlantic gets it done at JFK.

A quick turn: Less than 3 hours to get the plane ready

Flight VS127 from Manchester arrived at JFK at 3:16 pm, 13 minutes early. The flight back across the pond, VS128, left at 6:11pm. In that time, the airline unloaded all passengers and luggage, gave the airplane a thorough cleaning, refueled it, re-catered it and loaded it again with as many as 266 passengers, cargo and a new crew.

Immediately upon landing, the load supervisor and engineer performed a quick walk around the aircraft to spot any oddities, particularly with the body or the cargo doors. Chocks were then put on the wheels to make sure it didn't move.

The Virgin engineer plugged a headset into an outlet by the front landing gear to communicate with the captain, usually to welcome the crew to New York but also to let them know of any problems or hear about any that have come up in flight. The cargo holds were unloaded from the rear first, for reasons of balance. (An aircraft is like a seesaw.) The top priority for offloading is the bags of Virgin Atlantic Upper Class passengers and passengers making transfers. By the time we arrived, the bags had already been offloaded.

Upstairs, the above-the-wing crew was hard at work. The crew of cleaners and their leader made quick work of the airplane -- two or three cleaners on the Upper Class cabin, more in premium economy and still more in economy.

On our visit, two men wore backpack-style vacuums that were plugged into a power outlet on the plane.

Two other team members wet-mopped the galleys. All along the economy seats, headsets were jammed into the top of the headrest so they could easily be collected by a team member for recycling.

The above-the-wing team rotates stations, with some assigned to vacuuming, some to seat and tray-table cleaning and others to the lavatories.

Each tray table was opened and wiped down and the seat pockets emptied and tidied. Every lifejacket was visually inspected to make sure it was both there and properly stowed.

It turns out that passengers produce a lot of garbage. One estimate from IATA is that the average passenger leaves behind three pounds of garbage. Virgin Atlantic encourages passengers to reuse their cups onboard; it's written on the cups themselves.

New magazines are placed inside the seat pockets. Yet there are always a few surprises for the crew.

"We find around eight to ten items per day — the typical cellphone, passport, laptop ... and the odd teddy bear," Grant said, noting that the team does its best to return the items to passengers.

In the event of an onboard mishap such as air sickness, the seat cover can be replaced in the air; they're stored in the rear galley. At JFK, seat cushions can be quickly swapped out.

Passengers tend to spill all manner of food on the floor, but by the time the next group of passengers came on board, they wouldn't know that an Upper Class passenger had inadvertently crushed some crackers into the carpet. And if the food is a little trickier than a cracker to get out, that gets taken care of too. "We have a special spray for gum," said the above-the-wing lead.

Each seat is individually checked to make sure it fully reclines; this is part of the cleaning process. If any seats have issues, an engineer is ready to troubleshoot. The same goes for Virgin Atlantic's inflight entertainment system. The engineer checks each seat-back system to make sure it's working.

The head cleaner will hide around 10 plastic cards the size of a credit card and few plastic CD cases — called test pieces — throughout the plane. The objective is to make sure the crews clean every nook and cranny. The above-the-wing lead keeps track of where they've hidden each of the test pieces so that none are left behind. It's an on-the-go audit that keeps the cleaning team on its toes.

A mirror on a stick is used to inspect the overhead bins. Once cleaned, the bins are closed.

Used blankets and headsets are collected and loaded into the baggage hold for the return flight to Manchester, where they will be recycled.

Near the end of the process, the galleys are cleared of food trays in carts and the onboard garbage compactors are emptied.

As mentioned above, the cleaning crew rotates lav cleaning. The lav itself is emptied as part of the below the wing process—something that happened quickly while we were above the wing. A truck— called a honey wagon—parks below the belly of the aircraft, to the rear, where all the lavatory contents are stored in an on-board container. Above the wing, the lav is disinfected and—critically in my opinion—the floor is well-mopped. The lav we saw was clean as a whistle.

About 90 minutes before the plane is to depart, a fuel truck arrived to connect it to JFK's fuel system. This particular airplane had several thousand kilograms of fuel left after the flight from England (pilots think of fuel in terms of weight) and was topped off in about 45 minutes, long before passengers boarded.