Is it time to rethink COVID-19 travel mandates in the US?

Articles
Caroline Tanner covers news and travel for TPG. She is a journalism graduate of Mizzou and Northwestern.
Follow
March 24, 2022
•
9 min read 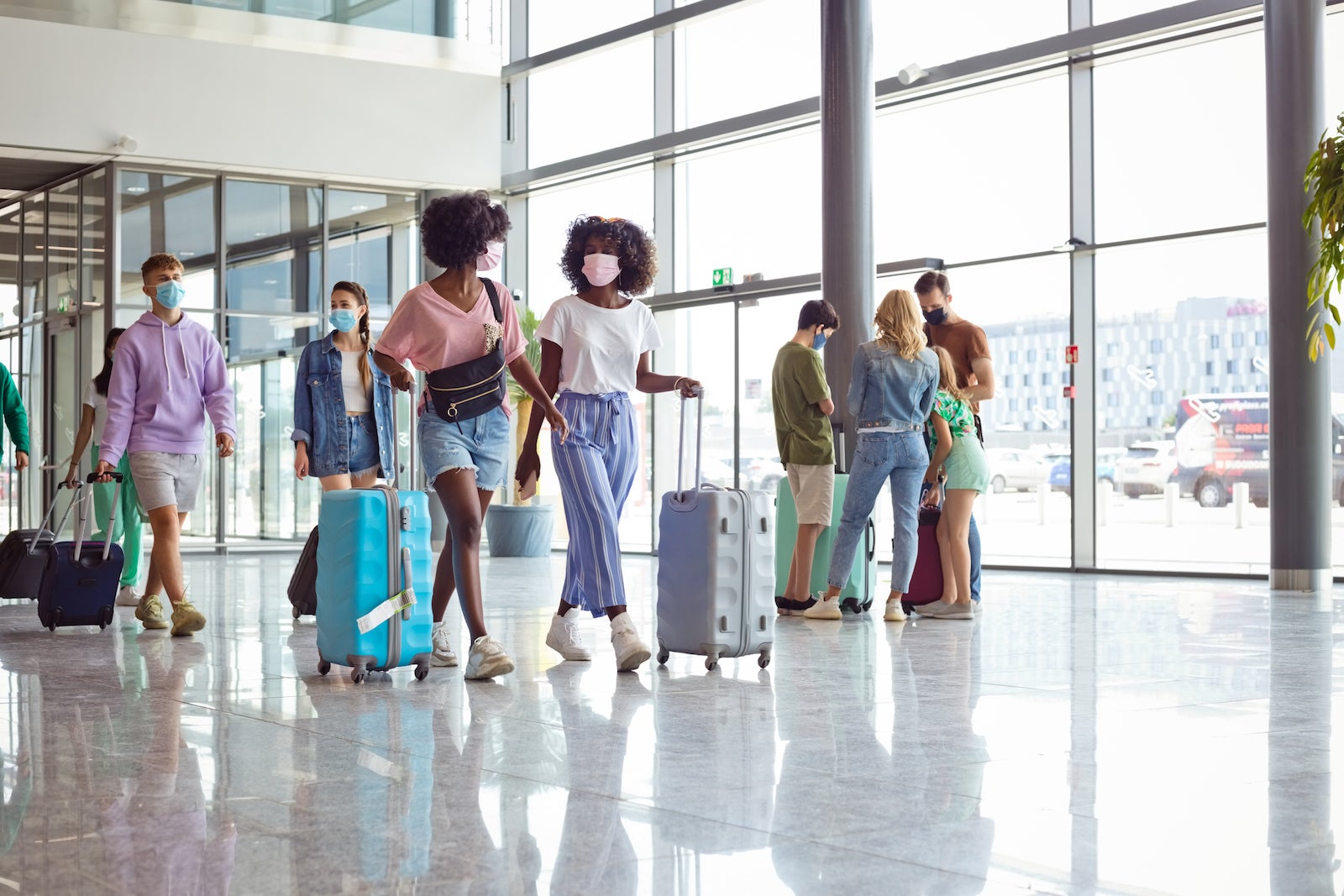 Despite continuous calls from both travel organizations and travelers, the Biden Administration has given no indication that the current pre-travel testing rule requiring travelers to the United States to present a negative COVID-19 test within 24 hours of arrival is disappearing, at least while the simultaneous federal transport mask mandate remains in place.

Wednesday evening, the heads of all the major U.S. airlines asked President Biden to drop the mask mandate and the requirement for testing, but so far there's been no comment from the White House.

As we look ahead to the mask mandate potentially being loosened next month, here's why the U.S. may also reexamine its reentry testing policy.

Other countries are dropping testing requirements

Since the start of 2022, many countries have dropped previously enforced COVID-19-related restrictions for travelers. Some countries no longer require tests of any kind while others are only asking travelers to test upon arrival. Some locales are removing mask requirements altogether. Others are even allowing travel like they did before the pandemic, without any extra paperwork or hoops to jump through.

Of these places, some destinations have applied new rules equally to all incoming travelers, regardless of vaccination status, while others have only lifted the burden thus far to help facilitate travel among fully vaccinated travelers.

As of March 23, fully vaccinated travelers are exempt from any testing protocols when visiting a broad range of countries, including France, Ireland, the Maldives, the United Arab Emirates and Kenya.

This means these travelers can enter those countries without having to worry about COVID-19 testing of any kind ... at least on the trip there. Some of these countries, such as Canada, still ask travelers to take a few extra logistical steps, namely in the way of completing an online form ahead of travel to verify vaccination status and other relevant health details.

There are other countries that still ask vaccinated travelers to test at some point during their travel, including many countries in Asia like Thailand, South Korea and Singapore, along with Australia and New Zealand.

On the other hand, many countries in Europe, the Middle East, the Caribbean and Central and South America don't consider one's vaccination status in determining entry steps.

Read more: US mask mandates are going away … what’s next?

They are still largely required across the board on public transit, both domestically and abroad. However, they've largely been dropped for other places indoors, excluding in the U.S. Virgin Islands, Slovenia and Puerto Vallarta, Mexico, for example. In much rarer cases, such as Nepal, you're expected to wear them outside.

The obvious elephant in the room, of course, is that the U.S. federal government still requires travelers (Americans and otherwise) to wear a face mask on public transit, including on flights and at airports through at least mid-April, despite no individual states still requiring their residents to do so.

Does the data support such mandates?

In announcing eased regulations, country officials have cited data behind their decision-making process for justifying the removal of protocols. They are deeming them no longer necessary thanks to increased vaccination numbers and decreasing new COVID-19 case numbers in their home countries. Economics is also likely playing a major role right now, too.

And if data is what is helping decide these loosened rules, it raises the question of which data. For example, the U.S. doesn't even track the number of international travelers who test positive before travel.

Airlines have conducted their own research on the efficacy of pre-departure tests. That data suggests you have a less than 0.1% chance of being exposed while traveling if all passengers test negative 72 hours in advance of their trip when that was the time frame for incoming passengers. So doesn't that argue for continuing a testing regimen?

"Studies have shown that the risk of transmission is 1 in a million on a flight. The predeparture testing and mask mandates were all layers of protection that helped to reassure travelers during the height of covid cases, said Dr. Jenny Yu, MD, the head of medical affairs at Healthline Media. "It would make sense to think of these measures together – what reduces the risk most."

There remains a lack of concrete data regarding the number of international travelers who have been turned away from U.S.-bound flights due to testing positive beforehand.

Regarding new daily cases nationally, these have steadily decreased since the end of January, according to data from The New York Times.

"With vaccination rates higher than previous, pre-travel testing is low yield in terms of catching positive cases while studies have shown that ventilation and mask-wearing makes the transmission negligible," continued Dr. Yu. "Both of these measures carry burden for airlines and travelers, with fluctuation of variant cases as we move forward, it would make sense to stick with the measure that reduces the risks most – and the science points to mask-wearing."

How much does frustration mean?

Beyond the lack of relevant data, there's also an overwhelming sense of frustration felt by travelers who regulatory authorities appear to be listening to.

"That means we are the first major economy to get back to the kind of restriction-free travel we all enjoyed before COVID-19," United Kingdom Transport Secretary Grant Shapps said in announcing the removal of entry protocols for all travelers to the U.K. on March 15. "I've heard the calls from passengers, from airlines ... that the Passenger Locator Form is a burden which has simply outlived its usefulness. No more quarantines, no more tests and no more forms. International travel is back."

And beyond frustration, an economic undertone tied to countries once again welcoming back travelers overall is hard to miss, given the financial burden suffered by both countries and travelers, due to lost tourism and testing costs, respectively.

Let's face it, testing can be a logistical nightmare

On one hand, the U.S. is relatively flexible in allowing travelers to submit both PCR and rapid antigen tests for entry, along with proof of recovery for those who recently recovered from the virus. Additionally, the U.S. will accept at-home tests like Abbott’s BinaxNow COVID-19 Home Test that are proctored remotely online, giving travelers more flexibility.

This flexibility only helps so much as tests can be hard to come by depending on where you live. Also, travelers can experience delays in receiving results, not to mention the hassle of timing your test to meet the 24-hour time frame, which gives travelers significantly less time to arrange for a COVID-19 test before their flight.

It can potentially complicate travel plans for those with jam-packed itineraries or people in more remote destinations with less access to testing.

When it comes to the inclination of U.S. officials to remove the mask and predeparture testing mandates currently in place, we can only speculate as the White House, which declined to comment for this story, remains close-lipped.

Perhaps the U.S. government decided to follow the lead of other countries, waiting on them to act before taking action itself. If that's the case, then it has the information it needs. However, some travel experts think other world leaders may be waiting to take a cue from the U.S., which could potentially propel the removal of both the mask and predeparture testing mandates currently in place.

There is also conflicting data. While case numbers are certainly decreasing overall and there is data to suggest that testing before a flight does help, how much weight should be placed on this when there's a relatively low chance of catching it on a plane to begin with?

"If health trends continue in the direction we’ve seen in the past few weeks, I wouldn’t be surprised if the mask mandate goes away in mid-April," Henry Harteveldt, president of the San Francisco-based Atmosphere Research Group, told me.

Surely all parties involved are acknowledging the new omicron variant, BA.2, which is rapidly spreading across parts of Europe, Asia and South Africa. That may be a pain point in the removal of remaining domestic mandates.

Just last night, Airlines for America, which lobbies for domestic airlines, publicly urged the White House to remove both mandates, citing data reflecting the "persistent and steady decline of hospitalization and death rates," in addition to similar decisions made by other governments.

"Now is the time for the Administration to sunset federal transportation travel restrictions – including the international predeparture testing requirement and the federal mask mandate – that are no longer aligned with the realities of the current epidemiological environment," the group wrote. "The high level of immunity in the U.S., availability of high-quality masks for those who wish to use them, hospital-grade cabin air, widespread vaccine availability and newly available therapeutics provide a strong foundation...to lift the mask mandate and predeparture testing requirements."