Articles
Alyssa Cerchiai rounds up the top travel stories each week and covers news on the weekends. If you catch her at the airport, she’d happily guest you into the lounge as a proud authorized user of her dad’s Platinum Card by American Express.
Follow
June 22, 2018
•
6 min read 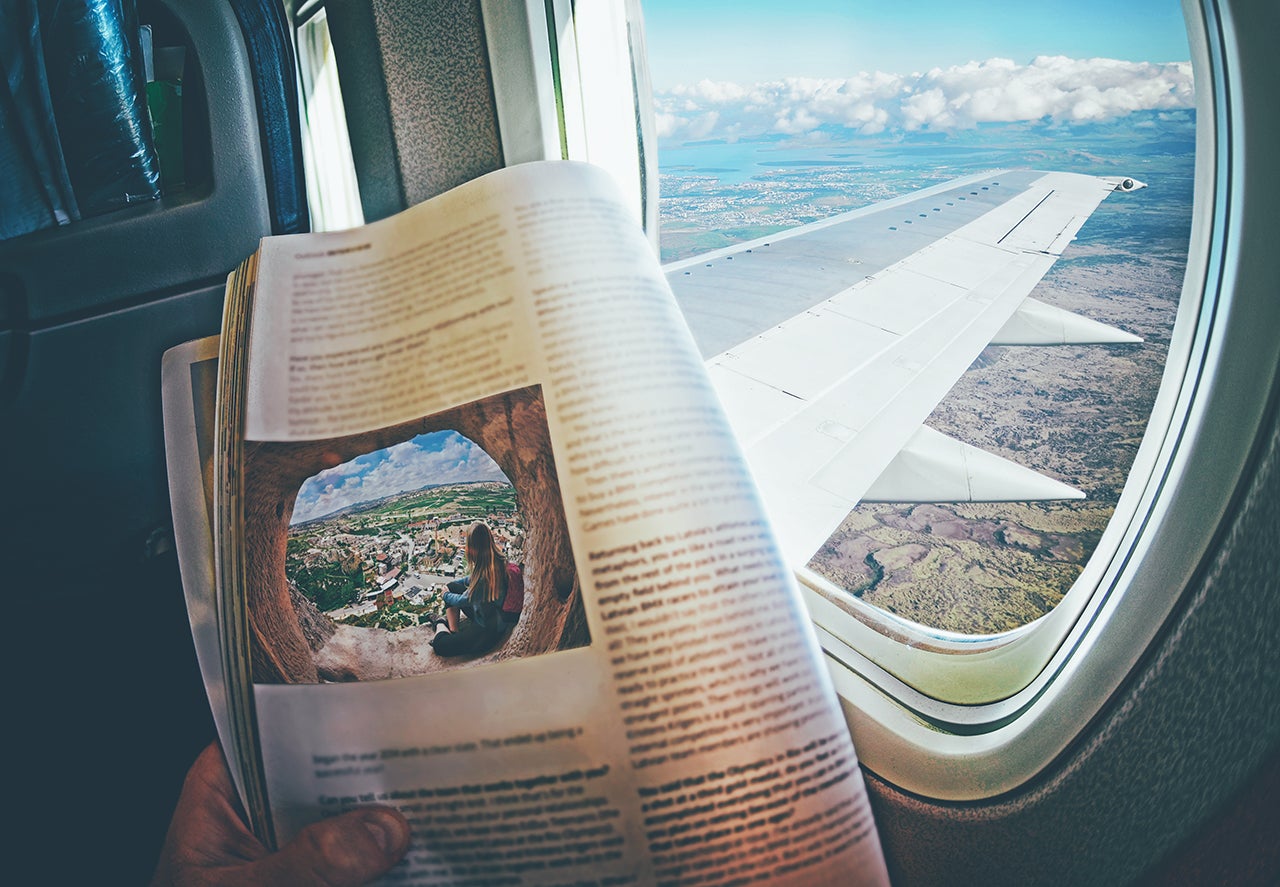 United's first-class magazine, Rhapsody, will be discontinued on board in the near future. Now, first-class passengers will only have one choice in reading material provided by the plane, Hemispheres, United's other in-flight magazine.

Rhapsody proclaims itself to cover "news and current events, business, travel, arts and entertainment, fashion and high-end consumables, from cars to Cartier watches" for "road-warrior businesspeople to card-carrying members of the global elite." There are 56 issues published online with celebrity covers from the likes of Robert De Niro to Lupita Nyong'o.

With fuel costs on the rise, maybe United is trying to lighten its cargo load by ditching the magazine -- like it did when it saved 170,000 gallons of fuel by switching to a lighter paper for the in-flight magazine. But the airline says its all about consolidation.

"In talking with our publisher, we felt it made more sense to offer one magazine to all customers, regardless of cabin, that provides the same content that our customers love," a United spokesperson told TPG. "We are taking the most popular elements of Rhapsody, which was previously only available in first and business class, and adding it to Hemispheres, our inflight magazine available at every seat onboard."

We were curious about how many people actually read in-flight magazines, so we asked our readers in the TPG Lounge under what circumstances they pick it up.

These flyers enjoy picking up in-flight magazines to pass time on a flight.

"I generally read them cover to cover to pass the time. Then I do the sudokus and crossword puzzles if I have time." - Michael N.

"I usually pick them up to look at airport maps and then glance at the other stuff. I tend to read the magazine from back to front since I start with the maps. :)" - Michael C.

"I usually browse them for ideas on things to do at some destinations" - Kendall L.

"I usually just read the last few pages about the airline, their planes, route network and look at airport maps." Richard B.

"I love getting on the plane and seeing what the new “Three Days In” feature is in Hemispheres (UA Economy). I’ll read it if it’s a city I’ve been to to compare my experience. I rarely read Rhapsody, the First Class magazine." - Adrienne A.

"I read one today. Like the “people” oriented stories." - Steve S.

"Always! As an Explorer Card member I have priority boarding on United so I usually finish reading Hemispheres before the doors even close, lol" - Eric R.

Some readers have stumbled upon interesting ways to take advantage of the content of the in-flight magazines, whether they were able to build upon a secondary language or find a good deal.

"It often gives good ideas for vacations... I recently read last month about the old Pablo Escobar mansion in Tulum that has recently been converted into a high end boutique hotel. That's definitely on the must-do list!" - Ted D.

"I like to thumb through AA’s Nexos magazine since I’m learning Spanish and it’s a nice, relevant opportunity to make myself read in another language." - Keith W.

"Last time I read one in Delta there was a coupon for The Parking Spot so I took the coupon and when we returned to LGA saved 10% off our parking for the week." Kimberly R.

"I actually got the best recipe for charred onion dip out of a Southwest magazine years ago. Also, I love route maps." - Dianne J.

"When I fly on international airlines, I love picking up their inflight magazines because they tend to be bilingual and I like to learn to expand my multilingual capabilities." - Colin C.

Not So Into It

Not everyone is that interested in picking up the magazine for some reason or another – but lots of people aren't into the germs lurking in the seat pockets.

"I immediately relocate them to the overhead bin and reclaim an extra 1/2" of space for my knees." - Chris R.

"I would, and did, but there have been studies to show they are the most germ laden things on the plane, so now I don’t touch them." - Robby W.

"It used to be the first thing I did as soon as I sat down. But only to go straight to the back to see what movies would be playing during that specific flight. Now that most flights give you the freedom to choose your entertainment, there’s no need for the magazine anymore." - Luije P.

The following TPG Lounge members only pick up an in-flight magazine on a circumstantial basis.

"I love in flight magazines! American is probably my favorite. Of course I ONLY pick it up to read when the WIFI goes out." - Evelyn E.

"Only at the beginning of the month. Otherwise, I’m grossed out." - Ann S.

"Only when I forget my headset" - Dan P.

"I usually flip through them after boarding before take-off, since the frequent announcements and checks make it difficult to get into a novel or start a movie." - Brittani S.

"Either I'm bored, want to see what my bar options are, or there is an article about a city that I'm interested in...." - Lisa E.

"I usually read the at the 9th hour of a 15th hour looooog flight I am usually bored, and nothing gives." - Andrea B.

Some commenters were mostly focused on a retired in-flight magazine that deserves an honorable mention: SkyMall.

"Back in the days of SkyMall I did... I loved looking at those ridiculously expensive and impractical items that, if I was rich, I most definitely would have bought :-D" - Patrick R.

Our points-obsessed staff uses a plethora of credit cards on a daily basis. If anyone on our team wouldn’t recommend it to a friend or a family member, we wouldn’t recommend it on The Points Guy either. Our opinions are our own, and have not been reviewed, approved, or endorsed by our advertising partners.
See all best card offers
Related stories
Guide
Here are the best Black Friday travel deals of 2022
Reviews
Large and lavish: A review of the Briggs & Riley Extra Large Expandable Spinner suitcase
Guide
5 best backpacks for every travel style
Guide
Here are the best Black Friday flight deals