U.S. to restrict travel from India on May 4

While several destinations have started to reopen to travelers, the U.S. is limiting visitors from one country during the COVID-19 pandemic.

The White House is expected to ban travel to the U.S. from India by most non-U.S. citizens, according to Reuters.

White House spokesperson Jen Psaki retweeted the news from Reuters, so it’s a sure bet this is happening.

Biden set to ban most travel to U.S. from India to limit COVID-19 spread | Reuters https://t.co/eldjhE0rK4

In fact, the Associated Press is reporting Psaki said, “The policy will be implemented in light of extraordinarily high COVID-19 caseloads and multiple variants circulating in the India.” In a statement, released Friday afternoon, the White House said it was on the advice of the Centers for Disease Control (CDC).

India, the world’s second-most populous nation, is experiencing one of the world’s worst COVID-19 outbreaks, with nearly 19 million positive tests. Over 208,000 people have died so far, but experts say this figure could be an undercount. Just under 2% of the population has been fully vaccinated, according to a Johns Hopkins University tracker.

Currently, the U.S. Centers for Disease Control and Prevention (CDC) restricts citizens from several countries around the world from entering the United States. Non-citizens who have visited China, Iran, the EU, United Kingdom, Ireland, Brazil or South Africa during the 14-day before attempting to arrive in the U.S. are barred from entry.

President Biden said on Monday April 25 that the U.S. would help India and other countries by sending millions of doses of the AstraZeneca vaccine thought it remains unclear how soon those doses will reach India.

If you want to help, UNICEF is on the ground in India delivering medical equipment, PPE and other supplies and care. Go to www.unicefusa.org/IndiaCOVID to donate. 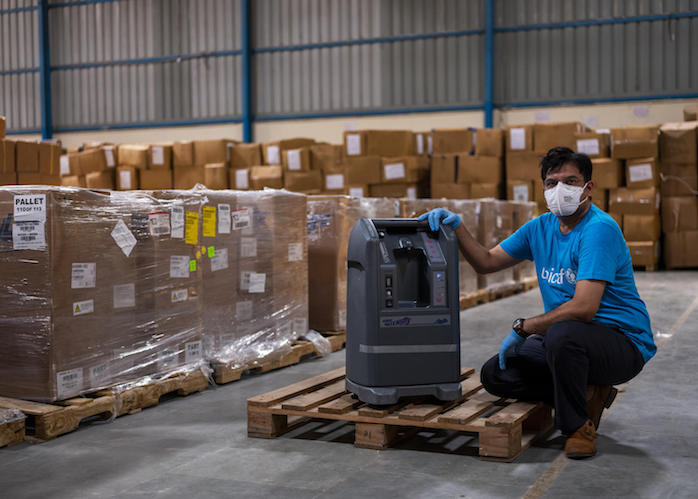 A UNICEF worker examines a shipment of oxygen concentrators in Delhi, India. ( Photo by © UNICEF/UNI370564/Vishwanathan)

Victoria M. Walker covers travel deep-dives and features. She previously taught multimedia journalism at Howard University and was the breaking news video editor at The Washington Post.
You might like
France has a new vaccine pass: Here’s what we know
News
2h ago
Bye bye, Bally’s: This iconic casino is returning to Las Vegas in its place
News
2h ago
Carnival Jubilee cruise ship to sail 18-day transatlantic voyage in 2023
News
3h ago
Delta SkyMiles® Platinum American Express Card