Turn Down the Turtle: 5 Ways to Eat Ethically While Traveling 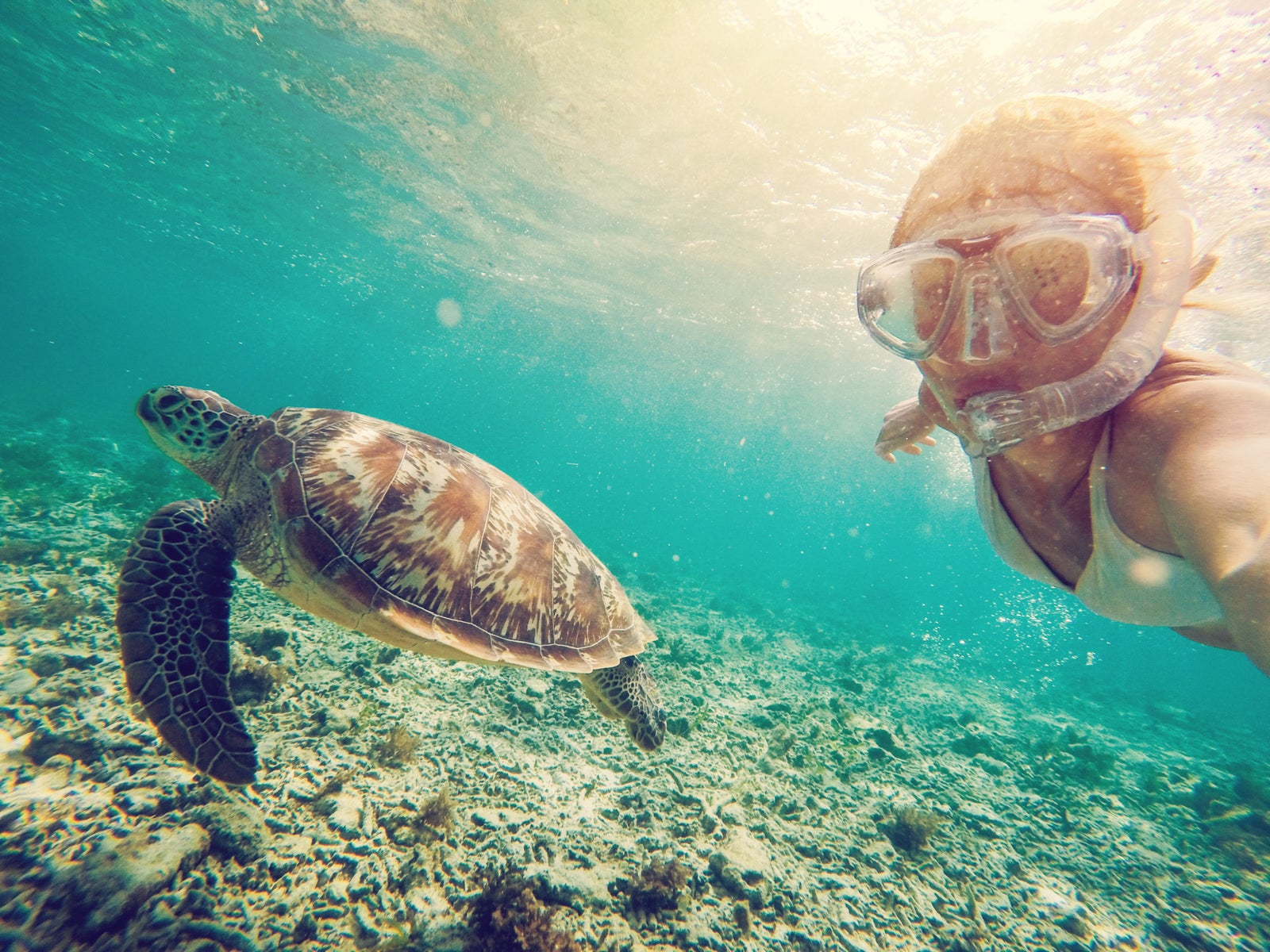 We're partnering with Capital One on our Purposeful Travel Hub. If you have unique ways you like to give back when you travel or just love exploring new places with family and friends, we want to hear about it. Share your most treasured travel moments and purposeful travel tips with us using #MeaningfulMoments.

In 2019, it’s never been easier to be a conscientious traveler, particularly those of an environmentally-conscious bent. Jetsetters are now able put their money where their mouth is and choose to stay at eco-friendly hotels, scuba dive in eco-friendly spots and opt to fly on airplanes powered by carbon-footprint-reducing biofuels.

It makes sense, then, that such travelers are now considering the ethical implications of how they eat and drink both domestically as well as abroad. Those who look closely, however, will find that it’s a thornier issue than at first blush.

What does eating ethically even mean, exactly? Is it consuming only sustainable foods? Supporting growers and producers with reputable employment practices? Respecting the norms and traditions of the culture in which you’re traveling? All of the above?

This could mean something different for everyone, so we turned to several experts in the field to help lay down some culinary ground rules for well-meaning tourists.

This might be the one instance in which pretty much everyone agrees. Eating an animal on the brink of disappearing from the face of the planet is not a good look — not for the animal, and not for you. Some major ones to look out for include sea turtle meat and sea turtle eggs, which often pop up in places where sea turtle tourism abounds including Costa Rica, Nicaragua and Ecuador.

“In most countries [home to endangered sea turtles], it is actually forbidden by penalty and prison sentence to consume any turtle products, be it eggs or meat,” said Christine Figgener, a marine conservation biologist whose anti-plastic-straw work landed her on Time’s list of Next Generation Leaders in 2018. Yet she often sees turtle meat and eggs in marketplaces or even restaurants, where they might be served blanketed in a salad of cabbage, carrots and boiled yucca. Steer clear, she warns.

“You can actually get in trouble as a tourist. Ignorance does not protect you from punishment.”

Turtles in general are dicey fare unless you’re in the United States, where most turtle meat on menus is farm raised. “The turtles that are eaten in Asia — the soft-shell turtles and a lot of the freshwater turtles—they are actually also mainly endangered,” Figgener said. “There's not that many turtles, except maybe African sliders, that are not endangered nowadays.”

Other big no-no’s? Bushmeat, which is a catchall term for the meat of African wild animals. Most of the time, there’s no good way to tell what you’re actually eating — be it a common rodent or an endangered chimpanzee. Also, human infections in Africa have been associated with the hunting, butchering and processing of bushmeat from diseased animals, which is all the more reason to keep it off your plate.

Bluefin tuna, too, is problematic. (Sorry, tuna roll lovers.) “It's severely overfished and the population isn't where it needs to be…” said Ryan Bigelow, the senior program manager at the Monterey Bay Aquarium’s Seafood Watch. Steer clear of eel while you’re at it, too.

“[Eel is] another tough one, because it is very delicious,” Bigelow said. Almost all eel that ends up in restaurants is farm-raised, but this is somewhat of a misnomer; scientists haven’t yet figured out how to hatch eel eggs, so instead they’re scooped from the wild and transferred to farm facilities to be raised. “It's almost more like ranching rather than farming,” Bigelow said. “This has devastated eel populations around the world because they're so valuable.”

Don’t be afraid to pepper your waiter with queries about sourcing. “When you buy seafood — where was it caught, how is it caught, what is it — those are the main questions you want to ask,” said Bigelow. The same principles can be applied to meat.

Questions like, “Where did this meat come from?” and, “Is it sustainably sourced?” are fair game. If the restaurant can’t readily supply you with an answer, it’s not a great sign.

Do Your Research Before You Leave Home

It might be impossible to figure out the provenance of the shrimp in your pad Thai when you’re sampling street food at midnight in a random alleyway in Thailand. So arm yourself with facts before you even step on the plane with help from trustworthy resources such as the Seafood Watch App, which offers up-to-date seafood recommendations for the US, and international organizations that offer sustainable seafood ratings around the world. The Environmental Working Group’s Food Scores database is also helpful for assessing the sustainability of more than 80,000 products.

Sometimes, though, even the best research efforts fall short. If you can’t figure out what not to eat in a given place, search out food producers that are worth supporting. Slow Food International, a global grassroots enterprise that supports local food cultures and traditions, highlights lots of notable producers on its website. Its Terra Madre Network connects more than 2,000 diverse food communities that practice small-scale and sustainable food production around the world, from a group of female millet producers in Uganda to a community of honey producers and beekeepers in rural Siberia.

Also, if you have your heart set on trying specific delicacies, do an Internet search on it beforehand. For instance, kopi luwak, a.k.a. coffee made from beans collected from civet droppings, became insanely popular a few years ago. Unfortunately, however, today it mainly comes from caged wild luwaks, which recent investigations reveal are often kept in inhumane conditions.

Decide How You Define “Ethical Eating”

“I find often when you're thinking about food and travel ethically, and you're just trying to live your life in an ethical way, the things that you care about can sometimes bump up against each other,” said Jennifer Breckner, an international councilor for Slow Food USA’s Ark of Taste National Committee.

What if the quinoa in your lunch wasn’t sustainably raised, but the industry that produced it is the backbone of an underprivileged community? If an environmentally-friendly chicken producer doesn’t treat its animals as humanely as you’d like? If a member of a community invites you into her home and serves you an unsustainable ingredient, and refusing to eat would be an insult?

“A conversation that we had at a Slow Food gathering years ago was about how we work with understanding that we were very much a sort of white, privileged organization,” she continued. Having the luxury to maintain personal restrictions on the types of food you’re willing to eat is reflective of an inherent privilege, she said, because not everyone is able to make such choices, whether that be for reasons financial, religious or cultural.

“Part of the work that we do [is figuring out] how can we come together to sort of compromise.”

There are no easy answers to these questions, and two people presented with the same set of facts may very well come to different conclusions. But thinking through your personal stances on important ethical issues will help you navigate this inherently tricky terrain.

Donate to Organizations You Support

Even those of us with the best of intentions can slip up. Did you eat something you’re not proud of? When you get home, give money to organizations that combat the issue that’s causing you to lose sleep. Slow Foods International and Seafood Watch are great, trustworthy places to donate, as are the Environmental Defense Fund, The Nature Conservancy and the Sierra Club Foundation. Giving won’t fix everything, but it’s a start.

Eating ethically can be a tall order. But that doesn’t mean you shouldn’t try.