Articles
Jordi Lippe-McGraw is a writer covering travel, family, food and wellness for outlets like Conde Nast Traveler, Travel + Leisure, the New York Times, Forbes, and more. She has traveled to more than 30 countries on all 7 continents (including Antarctica at 5 months pregnant) and is an avid puppy, penguin, and truffle lover.
Follow
Feb. 26, 2019
•
8 min read 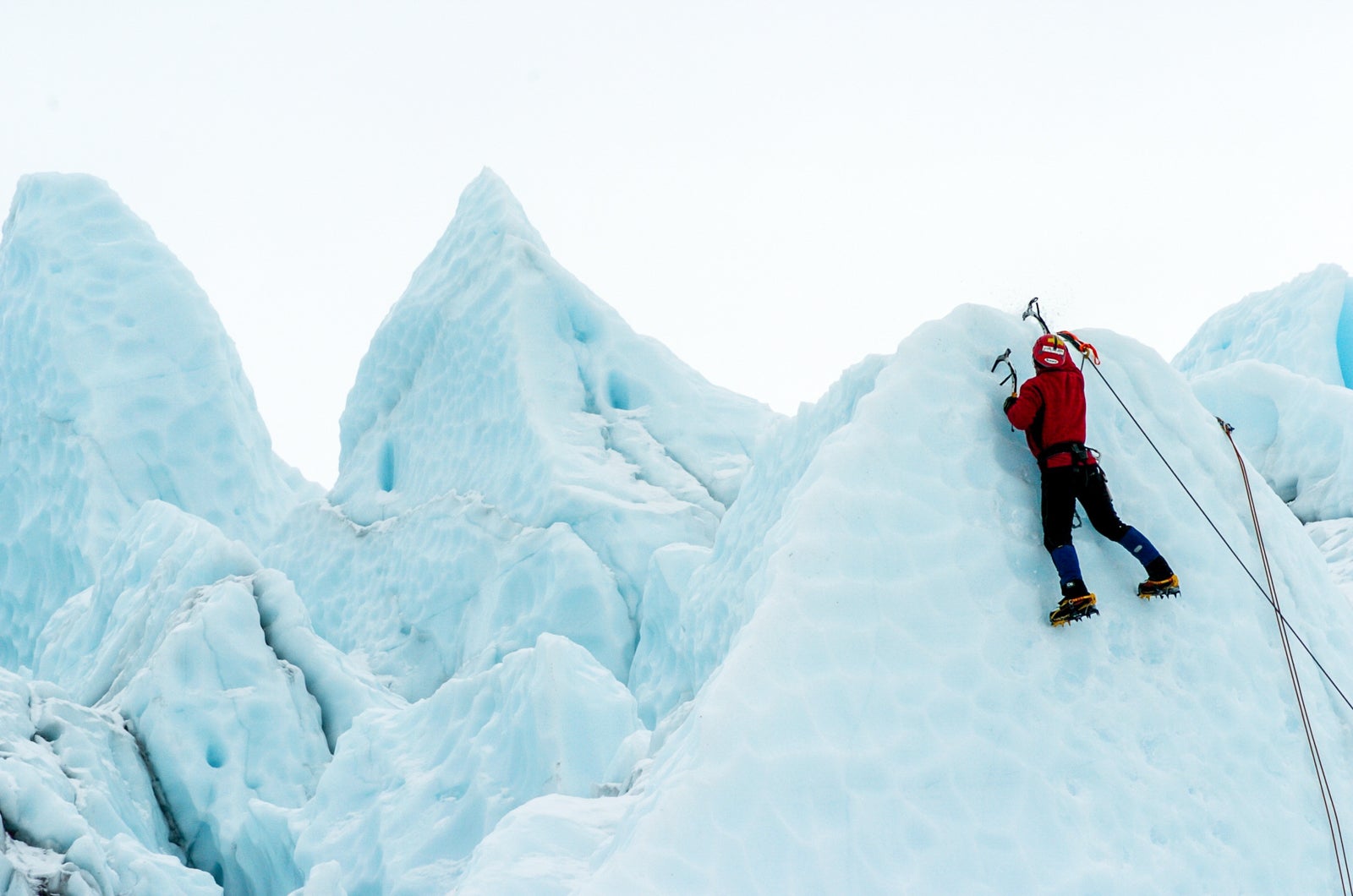 When Finding the Next Adrenaline Rush Is the Ultimate Reason to Travel
This post contains references to products from one or more of our advertisers. We may receive compensation when you click on links to those products. Terms apply to the offers listed on this page. For an explanation of our Advertising Policy, visit this page.

There are many reasons to travel: food, sightseeing, relaxing. But for adrenaline junkies and athletes, partaking in an extreme sport can be the sole reason for booking a trip. In fact, according to a recent report published by Allied Market Research, the global adventure tourism market is expected to grow in value by more than 17% (from 2017 to 2023).

And we’re not talking about running a marathon (unless, of course, that marathon is in the middle of the Serengeti) but rather activities like volcano boarding, heli-skiing, ultra-marathons and the Ötillö 47-mile swim-run. Thrill-seeking travelers are constantly on the lookout for experiences that test the limits of the human body.

James Lawrence — aka the Iron Cowboy — did 50 Ironman triathlons in all 50 states in 50 days. "I wanted to see if I could push mental and physical limits and do what people deemed impossible," he told The Points Guy. He’s gone on to compete in more extreme races around the world, completing amazing feats in places like Switzerland, Norway and Africa noting, "I’m not destination driven, but challenge driven."

This year, that challenge focus will bring him to the Scottish Highlands, where he’ll participate in the Celtman — considered one of the hardest triathlons — and the 700-kilometer mountain bike race, Absa Cape Epic, in South Africa. "These competitions bring me to some places I wouldn’t have initially thought to travel to," said Lawrence. "I love the accomplishment in these unique places."

It’s this same mindset that attracts people from all over to try their hand at some of the world’s most intense races. Imagine tackling 26.2 miles with over 5,000 steps to climb along the way. That’s precisely what 2,500 runners do each year at the Great Wall Marathon in China. Incredibly, it sells out each year, and it takes runners about 50% longer to complete than the average marathon.

Or, if you thought one marathon was terrible, how about doing nearly six of them? Considered one of the toughest foot races in the world, the Marathon des Sables crosses 156 miles of the Sahara Desert over six days. And that’s just the tip of the, well, iceberg. You can log 26.2 miles during the Antarctic Ice Marathon. And Machu Picchu? Yes, there’s a marathon there, too. Wherever you want to travel, there’s likely an intense foot race waiting for you.

And it’s more than just extreme races grabbing the attention of sports lovers. Benoit Lecomte, for example, plans to cross 5,500 miles of the Pacific by swimming from Japan to San Francisco. While that is truly pushing the body’s limits, others with less-ambitious goals are still trying risky swimming sports like cave diving.

Of course, there is risk involved in traditional scuba diving. But, being able to return straight to the surface helps divers escape many dangers. With cave diving, you don’t have that luxury. That doesn’t stop people from venturing to Riviera Maya, Mexico, Thailand and Belize to try their hand at the intense sport. Don't expect to go cave diving on your first trip, though. Training and certification takes months. Belize Diving Services in Caye Cauker offers PADI, SDI and cave diving certification and organizes dive tours in the Great Blue Hole.

Just how diving lovers choose destinations based on the underwater scenes, Caio Afeto chooses his destinations based on the places with the most daring highlining opportunities: tightrope walking from high points. He’s walked between two cliffs in João Neiva, Brazil and at Yosemite National Park. His favorite adventure so far was baselining between two cable cars over Sugarloaf Mountain in Rio de Janeiro, and then parachuting off.

"It was a complete experience of life. I can’t measure the excitement I get from it," he told TPG. "There’s still a lot I want to do, though. The world is full of places — you just need to be curious to find some interesting places."

It’s that love of heights, albeit less extreme, that’s getting sports lovers everywhere to try ice climbing. You know how rock climbing is pretty difficult with steep ascents and tricky footing? Well, add a cold, slick surface to that, and you’ve got ice climbing. There are many places across the US — Yosemite, Ouray, Colorado and Mammoth Lakes, California to name a few — and the world (think: Norway, Switzerland) where you can go to try your hand at the challenging sport. Asgard Beyond tour group in Iceland, for example, will take you ice climbing on a frozen waterfall.

But it’s not just pros on the hunt for thrilling sports. Piers Constable, a banker, and Michaela Wallin, a fashion retail consultant, use their precious time off from their day jobs to participate in a variety of adrenaline-junkie-approved activities.

"Neither of us is lying-on-the-beach kind of people," Constable told us. "On weekends we hike, bike, swim, run and ski, so it seems completely natural to spend our vacations doing what we love. But why do we travel when we can do these sports from our front door? Well, that’s because of the people you meet and the opportunity to immerse ourselves in different cultures."

Between the two, they’ve completed 18 Ironman triathlons in places as diverse as Alaska, South Africa, Dubai, Norway, Sri Lanka, Thailand and Australia. In 2018 alone, the couple also rode their bikes 500 miles across Japan, did triathlons in Bermuda and Alaska, skied in Sweden and France, and went mountain biking in South Africa.

Both skiing and mountain biking are two popular sports that have been kicked up a notch (or three) over the years. With skiing, for instance, instead of taking a lift up a mountain, a helicopter will bring you to a peak where there are no trails, and you ski or snowboard down, creating your own path along the way. It’s called heli-skiing, and it's available everywhere from Switzerland and Colorado to British Columbia and Japan. Whistler Black Comb has packages that start at just over $1,000 for three runs in Whistler’s backcountry.

And as for mountain biking, you can hop on a bike and head downhill while navigating rough terrain and reaching speeds above 50 miles per hour in places like the Rocky Mountains or the Atacama Desert in Chile. Cascada Expediciones, for example, will take you mountain biking in the salt flats of Chile as part of a multi-sport adventure tour.

Then there’s just the totally out-there sports you probably didn’t know existed, like volcano boarding, which is drawing people to countries like Nicaragua. It’s there where adventure tour groups like the one organized by Bigfoot Hostel Léon lead daring individuals on an hour hike up the active Cerro Negro volcano, and then provide the gear to slide down on plywood or metal boards at up to 60 miles per hour.

So, how do these thrill-seekers even find such wild sports to try? "Mostly, we get inspired from what our adventurous friends are doing in places we haven’t been to, and then head there," said Wallin. "We feel so fortunate to be fit and healthy enough to do these things, and hopefully we’ll have the energy and ambition to keep traveling for the rest of our lives."

Featured image by (Photo by Robert Baker via Unsplash)