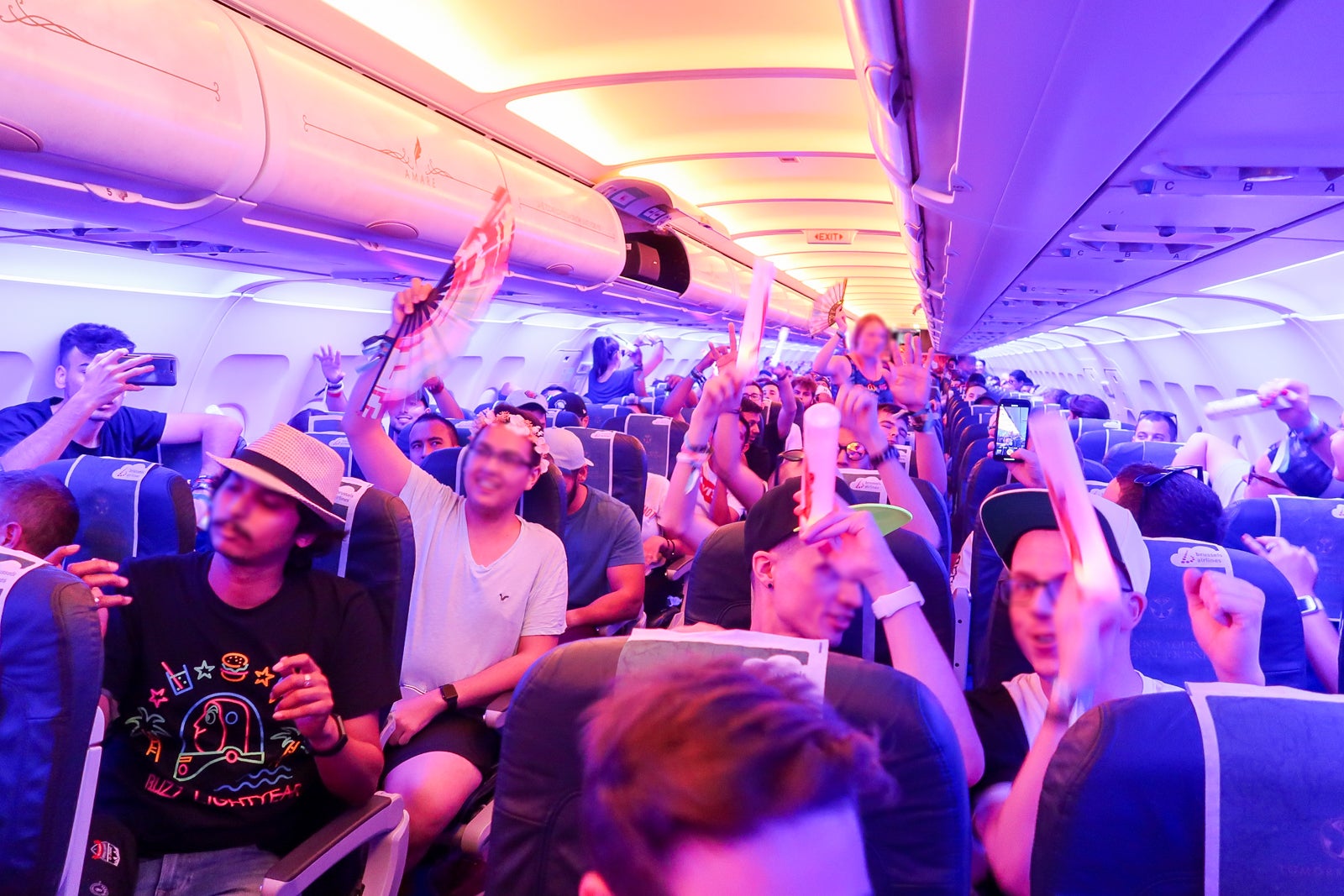 What It Was Like on Brussels Airlines' Inflight EDM Rave to Tomorrowland
This post contains references to products from one or more of our advertisers. We may receive compensation when you click on links to those products. Terms apply to the offers listed on this page. For an explanation of our Advertising Policy, visit this page.

Since 2005, festivalgoers from around the globe have gathered in Boom, Belgium, for Tomorrowland, one of the world's largest EDM festivals. Held during the final two weekends of July, you can expect sold-out crowds of more than 200,000 people dancing to their favorite DJs — from David Guetta to Steve Aoki — in the hot Belgian sun. Even NBA legend Shaquille O'Neal got in on the action when he was seen headbanging in the front row to Modestep last Saturday.

For those wanting to get the party started even earlier, Brussels Airlines offers passengers the chance to fly on special Tomorrowland "Party Flights" to the festival from various destinations around the world. Now in its eighth consecutive year, the partnership allows customers to buy various packages that include gate parties and flights with live music, along with accommodation and a Tomorrowland ticket.

Departure airports range from Washington, DC to Ibiza, and last week I was luckily enough to fly out of the Spanish island on one of the 11 'TML Party Flights' that featured a live DJ on board. The experience was eventful, to say the least.

I arrived at Ibiza Airport (IBZ) via a connection from Barcelona (BCN) and was quickly directed to the Carlsberg-sponsored gate party. Not entirely sure what to expect, I was guided through a luminous green corridor into what can only be described as a full on rave.

The gate party was held in a fairly large room complete with tarmac views, a fully functioning bar and a live DJ — the perfect combination for any festival-bound AvGeek.

I wasn't entirely sure how long the party had been going on for, but judging by the buzz of the room, along with some fairly unapologetic singing and dancing, it was certainly in full swing.

Buckets of beer were placed in various corners of the room, which was handy given that reaching the bar would have required crossing a sea of energetic partiers. The general atmosphere among the crowd was fantastic, and it was clear everyone was having a great time. I was only able to enjoy the vibrant scenes for around 15 minutes before a voice over the intercom announced that boarding had started. This didn't seem to bother the other passengers, however, as they danced their way out of the party room into final security checks at the boarding gate. It was a surreal sight.

We were flying on 'Amare', a 13-year-old Airbus A320 (registration OO-SNF) adorned with a seriously impressive eagle painting on one side. It was certainly one of the most striking and beautiful liveries I'd ever seen.

Boarding commenced smoothly with the constant hum of chants and chatter amongst the excitable — if not tipsy — crowd as they got their first look inside the party plane. The interior walls featured Tomorrowland branding, and the usual Brussels Airlines headrest covers had been replaced.

Other than the special furnishings, it looked like a standard A320 in a 3-3 configuration, though that was all about to change.

With boarding complete and the plane airborne, the seatbelt sign was the only thing stopping the in-flight entertainment from getting started. About 20 minutes and a high-pitched DING later, we were all set to party.

That being said, this particular Tomorrowland package included an on-board world class pastry chef, so the first order of service was a live display of some of the finest chocolate craftsmanship I've ever seen. Given the lively nature of the party gate, this seemed like an odd interlude before the real fun started. Chocolate puddings — as delicious as they were — hardly scream "huge EDM festival". Nonetheless, this didn't stop any of the passengers from gobbling them down.

Once the desserts were cleared away, we were finally ready for the main event — a live EDM set from an onboard DJ. Wim Cluckers, better known as DJ Licious, began setting up his decks in the front rows of seating. This alone was an impressive feat given the lack of space in a narrow-body A320.

Anticipation built as all passengers were told to close their window shades, and the aircraft quickly took on an alluring dark purple glow thanks to newly installed mood lighting. It was time.

Music came crashing through the built-in speakers and we were immediately transported from a standard flight to a futuristic-feeling rave 35,000 feet in the air. Passengers stood up (before promptly being told to sit back down) and waved their Tomorrowland glowsticks in the air.

Models paraded their way through the aisle, engaging and dancing with jubilant partygoers. At times, it was very easy to forget that we were speeding through the air. Whilst the mood remained upbeat throughout, I was surprised that no alcohol was served for the duration of the flight. I had assumed some sort of drinks service would go hand-in-hand with a party flight, but for health and safety reasons, the last bit of booze consumed was back at the boarding gate.

It was only a two-hour flight from Ibiza to Brussels, and after about 40 minutes of sky-high partying DJ Licious played his closing tracks. Chants of "ENCORE! ENCORE!" went unanswered and we began our descent, much to the relief of one particularly sleepy passenger.

An A320 certainly isn't the most practical place to host a live DJ, and things were bordering on claustrophobic at times, but overall it was a completely unique and enjoyable experience. The crowd were animated and entertained throughout, though I was relieved this was one of the European party flights rather than an eight-hour mission from Washington, DC.

If you're looking to get on board one of the Tomorrowland flights next year, you should start planning soon. Packages offered by Brussels Airlines range widely from including travel (flights, train or bus) to Tomorrowland entry tickets and accommodations. You can customize your package — whether you want 3-star or 4-star accommodations, if you want to add on a tour through Europe and more. Packages start at €860 ($960), which includes a flight from anywhere in Europe, transfer to Dreamville with ticket and tent, Tomorrowland ticket and transfer and flight back.

Featured image by (Photo by Liam Spencer / The Points Guy)