Articles
Max Prosperi is a part-time frequent flyer and travel writer and full-time student. Based in St. Louis, Missouri, Max covers a variety of topics with a focus on points, miles, and aviation.
Follow
Aug. 04, 2019
•
3 min read 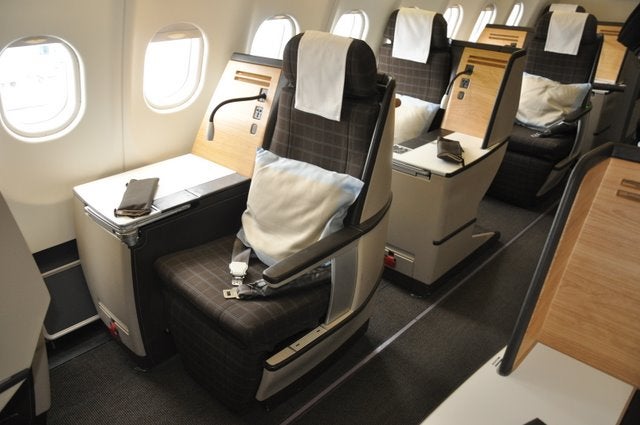 SWISS Launching Nonstop Flights from Zurich to Washington DC
This post contains references to products from one or more of our advertisers. We may receive compensation when you click on links to those products. Terms apply to the offers listed on this page. For an explanation of our Advertising Policy, visit this page.

SWISS International Air Lines announced that the airline will add two new cities to its route network early next year. Beginning in the first quarter of 2020, SWISS will launch nonstop flights from the airline's hub in Zurich (ZRH) to Washington DC (IAD) and Osaka, Japan (KIX).

These new routes will be made possible with the arrival of two new Boeing 777-300ER aircraft. SWISS will shift smaller aircraft to its new routes while upgrading the airline's existing service to Miami and Tokyo.

Service to Miami is currently operated with the Airbus A330 while Tokyo is served with the Airbus A340. In a press release, SWISS noted it will be adding year-round 777-300ER service to Miami and Tokyo due to increased demand in both passenger traffic and cargo. "As The Airline of Switzerland, we connect our home country with the world’s key economic, societal and tourist destinations,” SWISS CEO Thomas Klühr stated.

How To Fly SWISS' New and Upgauged Flights

SWISS is a Star Alliance member, allowing members of partner airline frequent flyer programs to redeem points or miles for the airline's flights. United MileagePlus, Air Canada Aeroplan, and Lufthansa Miles & More are just a few Star Alliance programs through which SWISS flights can be booked.

SWISS has already loaded the airline's Boeing 777-300ER flights from Zurich to Tokyo. However, the airline's new service and upguaged flights to Miami have yet to be added to the airline's schedule. This means that travelers looking to book SWISS' new nonstop flights to Washington DC or Osaka will have to wait.

If you're hoping to score a seat in first class on SWISS, you'll likely be out of luck. Unless you are a Miles & More Senator or HON Circle elite frequent-flyer, SWISS first class award flights are off-limits. Fortunately, while often hard to find, nonelite frequent flyers can book SWISS business class. Of course, economy class is your best bet when SWISS' new flights are loaded into the airline's schedule.

Here's how many United MileagePlus miles you'll need to book a one-way ticket from Washington DC to Zurich when flights go on sale:

SWISS offers a fantastic onboard product not only in first and business class but also in economy. Additionally, Zurich offers a number of connecting flights to destinations throughout Europe. As a Star Alliance member, US-based flyers can book SWISS' new flights to Washington DC and upgauged 777-300ER flights to Miami using United MileagePlus miles. While SWISS' new flights have not been loaded into the airline's schedule just yet, the new routes will likely be available later this year.