Articles
Harriet Baskas is an award-winning journalist and the author of eight books. She writes, most often, about airports, air travel, unusual museums, and odd adventures for a variety of outlets, including her blog, StuckatTheAirport.com.
July 30, 2022
•
6 min read 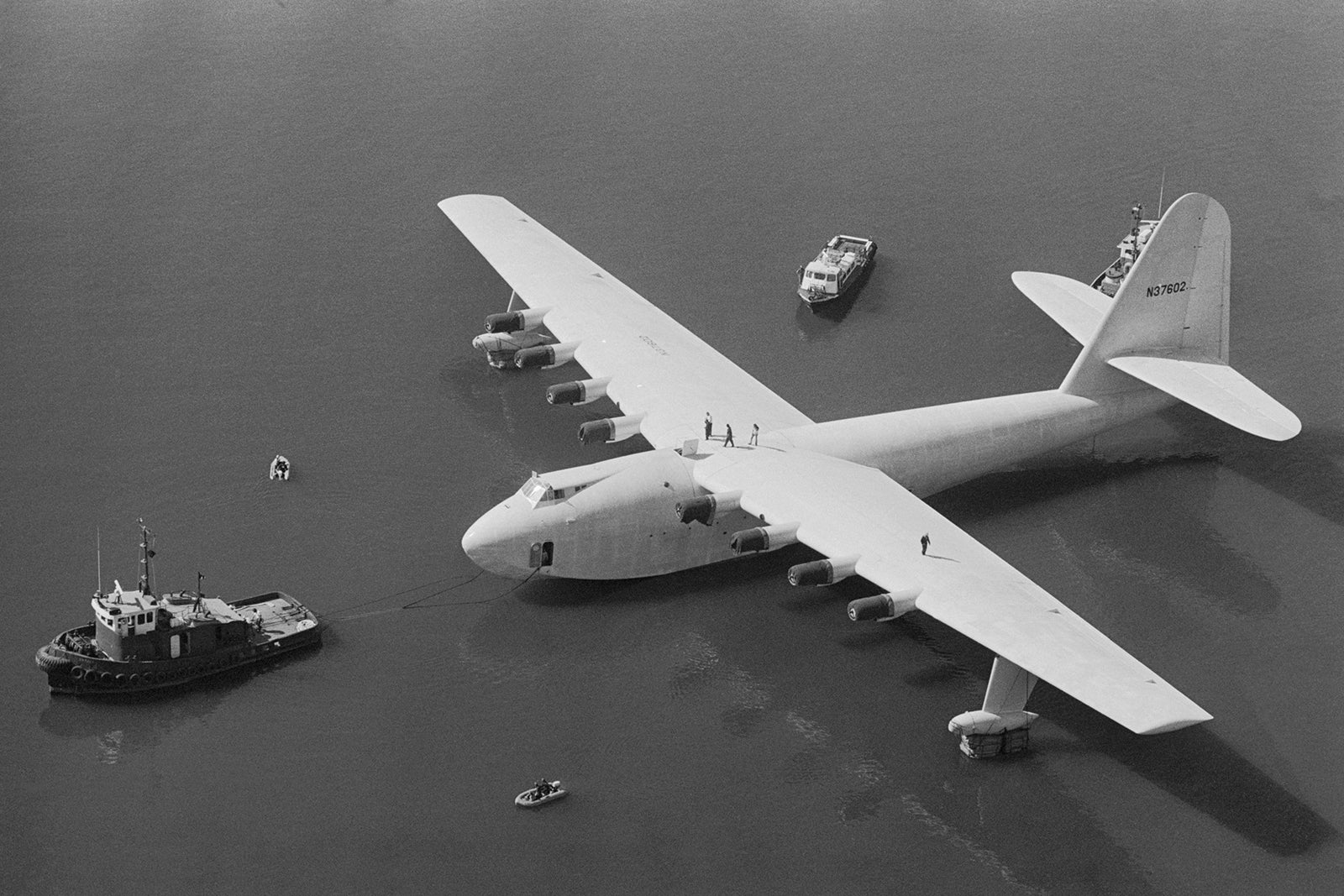 For decades, the eight-engine Hughes H-4 Hercules wooden seaplane better known as the Spruce Goose held the title of the aircraft with the widest wingspan.

Designed and constructed in the mid-1940s by eccentric tycoon Howard Hughes and the Hughes Aircraft Company, the plane was a prototype of a flying boat intended for military transport during World War II. It weighed 300,000 pounds empty, had a wingspan of almost 312 feet (longer than a football field) and was made almost entirely from laminated birch wood.

Now, nearly 75 years after its debut, we'll consider its legacy, tell you where you can see this plane — and explain how its big milestone is being commemorated.

History of the Spruce Goose

Built for $23 million, the Spruce Goose flew only once. Howard Hughes took it out over the harbor in Long Beach, California, on Nov. 2, 1947. The plane flew 70 feet over the water for 26 seconds.

Although technically airworthy, the Spruce Goose never went into production. However, an increasingly eccentric Hughes never gave up. From 1947 until his death in 1975, Hughes kept the Spruce Goose in ready-to-fly form in a staffed, climate-controlled Long Beach hangar at the cost of $1 million a year.

After that, there was talk of breaking up the Spruce Goose and sending it out in parts to various museums. An intact Spruce Goose was eventually put on public display in a domed hangar next to the Queen Mary in Long Beach.

In 1992-93 the legendary aircraft was disassembled and transported to McMinnville, Oregon (50 miles southwest of Portland) by barge and truck. Restoration began in 1993. When re-assembly was completed in 2001, the Evergreen Aviation & Space Museum opened its doors to the public with the Spruce Goose as the centerpiece of exhibits, joining more than 50 other military and civilian aircraft, unmanned aerial vehicles and spacecraft.

See how the Spruce Goose made its way from California to Oregon.

What’s on deck for the 75th anniversary of the Spruce Goose flight?

With the 75th anniversary of the Spruce Goose flight around the corner, TPG checked in to see what the museum has planned to mark the upcoming milestone.

On Nov. 5, the museum will hold a 1940s-themed gala beneath the giant tail of the aircraft inside the museum. Around that time, Microsoft will also release a Spruce Goose edition of its flight simulator program, created with a 3D map of the plane, according to museum officials. A year of anniversary events, some of which are still in development, will follow.

Inside the museum, the Spruce Goose won’t be making any anniversary movements, but some of the exhibits in the cargo hold and around the aircraft will be getting a makeover.

Lydia Heins, the museum’s director of curation and collections, told TPG that the Hughes archives contain more than a million pieces of paper about the Spruce Goose, including blueprints, photographs and technical reports. There are also hundreds of artifacts relating to the Spruce Goose and to Howard Hughes’ other businesses, such as Hughes Airlines.

For the anniversary refresh, Heins plans to put away some artifacts that have been on display for years and bring out some new ones. She’s also creating new exhibits that will tell some fresh stories and make some new connections. The exhibits will detail the role of the Spruce Goose in popular culture as well as Howard Hughes’ dealings and relationships with the U.S. government.

One example of an item going off display soon is the Spruce Goose water testing model, which was used to see how the aircraft would perform in water.

Also going back into storage: the Hughes Drill bit. “That’s the invention by Howard Hughes Sr. that made the family’s wealth skyrocket and allowed Howard Jr. to pursue his passion for aviation,” Heins said.

The Spruce Goose holds title to a good number of firsts, and seeing the aircraft up close — inside and out — is a treat. Still, there are some other big picture reasons to visit this behemoth aircraft and learn its story, said Steve Scott, who just stepped down as interim CEO of the museum.

“You’re seeing billionaires influencing aviation and space travel right now. But one of the first innovators that did this was Howard Hughes,” Scott told TPG.

“The Spruce Goose was the beginning of this billionaire infatuation with air travel that went on to Richard Branson, Paul Allen, Jeff Bezos and Elon Musk," he said. "They’re not doing it for the money. They’re doing it because people say they can’t do it. And this is exactly what Howard Hughes did. He built something that people said couldn’t be built or flown.”

Need another reason to visit the Spruce Goose?

While it requires a separate admission fee, the Wings and Waves Waterpark, located on the same campus as the Evergreen Aviation & Space Museum, is an aviation-themed waterpark with a retired Boeing 747 on the roof. Inside are attractions dubbed Mach 1, Splashdown Harbor, Nose Dive and Tail Spin.

Featured image by Bettmann Archive
Editorial disclaimer: Opinions expressed here are the author’s alone, not those of any bank, credit card issuer, airline or hotel chain, and have not been reviewed, approved or otherwise endorsed by any of these entities.