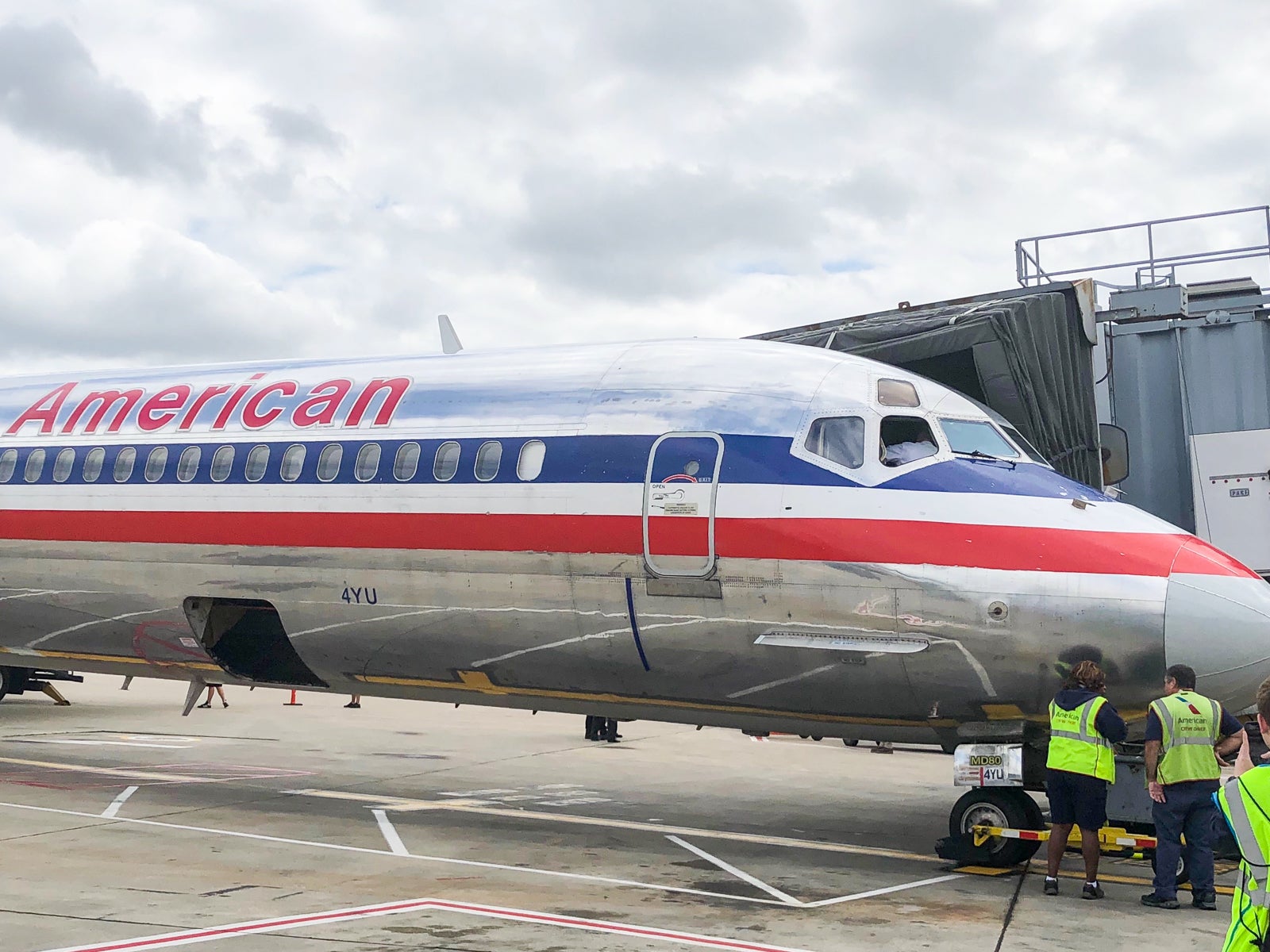 So long, 'Mad Dog.' American Airlines has flown its last 'Super 80' flight
This post contains references to products from one or more of our advertisers. We may receive compensation when you click on links to those products. Terms apply to the offers listed on this page. For an explanation of our Advertising Policy, visit this page.

As the sun was rising over Terminal C at Dallas/Fort Worth International Airport on Wednesday, a group of passengers was already gathering at Gate 2.

To passers-by, the stage that had been set up and the rowdiness no doubt seemed out of place for such an early hour. But Gate 2 wasn't hosting just any morning departure. Passengers had flown to Dallas starting the day before just for this occasion: the final American Airlines revenue flight of the McDonnell-Douglas MD-80, appropriately numbered Flight 80.

To mark the sendoff, songs from the 1980s — think hits like "Time of My Life" and "Don't You" — were playing at the gate. Appropriate, since first the MD-80 took to the skies that decade.

The flight, and the run-up to it, doubled as an AvGeek family reunion. American Airlines frequent-flyers hosted a meetup in the DFW Terminal A Admiral's Club the afternoon before AA 80 departed. Seats on the flight were in such high demand that the airline was offering vouchers starting at $200 by noon on Sept. 3 for passengers who were willing to take a different flight and a different aircraft.

(In the end though, a last-minute cancellation meant Flight 80 got airborne with at least one empty seat. At least one passenger also just booked the flight as part of a connecting itinerary. She had no idea it was going to be anything special.)

Related: TPG's daily newsletter; Get the latest news and frequent-flyer info delivered right to your in-box

Once in the air, what was perhaps most striking about the flight was that most of the passengers had fond, but run-of-the-mill memories of the plane.

When grander jets retired from other airlines — like the Boeing 747 at United and Delta, in recent years — frequent-flyers posted online and spoke about their first international journeys, the spiral staircase to the upper deck and the glamour of Pan Am in its heyday. They recalled formative aviation memories that helped people literally broaden their horizons.

On Flight 80, passengers were certainly fond of the plane, but in a totally different way. Their memories were more subtle, though still formative. Passengers didn't talk about a single landmark MD-80 trip, but instead spoke about how the plane had woven itself into their lives slowly over time.

"The MD-80 got me my first Executive Platinum wings," said Pam Sheeler, an air traffic controller based in Las Vegas who was on the flight.

Executive Platinum, of course, refers to American Airlines’ highest level of elite status with published criteria; the invitation-only Concierge Key status is the only higher rung at American.

Sheeler said she remembered living in Seattle when the MD-80 was the only aircraft the airline flew to the airport. It carried her on every trip she took, and helped make her an American loyalist.

Cole Kerns, a 21-year-old pilot-in-training at American's Envoy regional affiliate, was flying on Flight 80 with his parents in their usual arrangement: Cole sitting at the window, his mother in the middle and his father on the aisle of the three-abreast side of coach. Kerns said the MD-80 helped him discover his love of flying and set him on the professional path he's on today.

He remembered earning enough frequent-flyer miles on his own to get upgraded to first class at seven years old. He hasn't looked back.

His only regret, he said, is that the Mad Dog won't be around for him to fly when he eventually gets to mainline operations. He said he'd be willing to settle for a Boeing 787 in his future.

Like Kerns and Sheeler, most of the passengers aboard Flight 80 had a long series of memories in which the plane played a part.

The MD-80 may not be as "special" as a 747, but it was possibly more important to its loyalists. The plane was a workhorse for American, and remained true to that identity even on its very last mission. The final passengers were fans, but not celebrities. And the plane wasn't going to some exotic locale. Flight 80 left Dallas just after 9 a.m. local time on Wednesday and arrived shortly over two hours later in Chicago. To the last, the MD-80 flew a route that any business flyer may have wound up on as part of any routine mid-week business trip.

"They all have a personality," said Patti Strait, a San Francisco-based flight attendant for American who was on Flight 80 as a passenger. She said it was her favorite plane, and she's missed it since it stopped going into San Francisco. She now primarily flies Boeing 737s or Airbus A320s, and said neither has the same familiarity to her as the MD-80 did. She recalled, too, that flight attendants in the back would plug their ears before the reverse thrusters went on after landing, and would often watch passengers follow their lead.

Boarding Flight 80, a passenger could really appreciate how close to the ground the Mad Dog is slung. The jetway had a noticeable tilt down. As on a regular flight, the overhead bins were full by the time the last passengers got on the plane, so some roll-aboard luggage had to be gate-checked.

Once onboard, every flyer was greeted by a personalized note from the head flight attendant, along with an MD-80 memorabilia gift bag. Everyone was also treated to first-class service, even in coach, with free drinks and snack kits. (Non-plastic place settings, however, remained reserved for the passengers in the front.)

The flight was essentially a big farewell party. Many passengers acknowledged that on a normal MD-80 flight they'd have their headphones on and their heads down. But on Wednesday's Flight 80, the whole time was spent socializing and sharing memories and stories. Applause went up after just about every announcement, as well as after takeoff and again when the plane landed in Chicago.

Passengers also took it upon themselves to take some souvenirs from the plane away with them: row stickers, window shades, almost anything that wasn't nailed down seemed to be up for grabs.

Flight 80 itself was operated by MD-83 number N984TW, the last of the Mad Dogs to roll off the production line in Long Beach, California. It was delivered to TWA in 1999 and had flown 27,871 cycles over 53,598 hours in the course of its service.

N984TW continued on from Chicago to the "boneyard" storage facility in Roswell, New Mexico, where it will join 25 other MD-80s that American is sending into retirement — all on the same day. Together, those 26 planes carried more than 94 million passengers over the course of their service.

No doubt, a new plane will take over as the standard workhorse for American now that the MD-80 is retired.

But, the Mad Dog is still important to American's story.

"In many ways the MD-80 is the plane that built this company," Vasu Raja, American's vice president of planning, said as Flight 80 descended toward Chicago. "While it's the end of one era, it's the start of another one. American will be the leading airline in the post-consolidation era," he predicted.

Featured image by An MD-80 on the ground in Chicago after its last revenue flight. (Photo by Zach Wichter/The Points Guy)