Road trips from Washington, DC, for every type of traveler 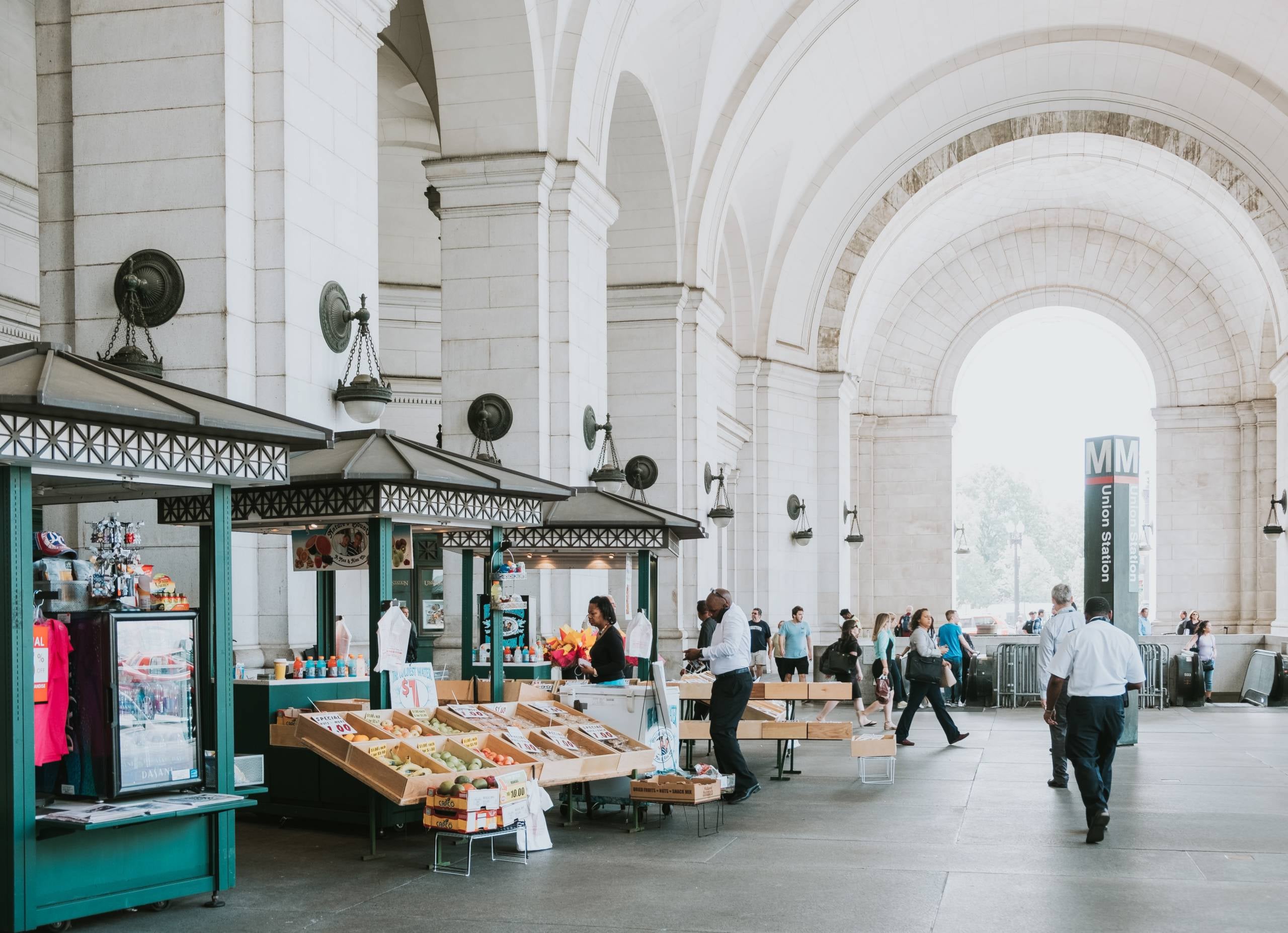 If you're unfamiliar with Washington, D.C., you might think it's a city straight out of a scene of House of Cards or Veep. There's Washington, the city that makes laws, and then there's the District, a city-within-a-city that's rich in African-American history, food and culture (shoutout to mumbo sauce, halfsmokes and Go-Go!).

But there's more to the region -- home to more than six million people -- than Washington. Just outside of the Beltway that circles the District, you can find excellent food and drinks, spend a relaxing day at a winery or spa, or even visit a beach. Best of all, this is all within 200 miles of the city; perfect for a long weekend or even a midweek jaunt.

I've often heard of Richmond described as "the end of the North and the gateway to the South," and I couldn't agree more. In Richmond, you'll find the Southern Hospitality, the sweet tea, the "yes ma'ams" combined with a kind of electricity and hustle you'd find in Northern cities. When I think of Richmond, I think of history -- the 76th mayor of the city was also the U.S.' first African-American governor -- and food.

What to do: I hinted at it above, but Richmond is known for history. From federal-style mansions to the Old City Hall to the Black History Museum and Cultural Center of Virginia, you will be sure to learn something new about Virginia and the U.S. RVA is also a great city for families, as it's affordable to explore and walkable if you don't want to bring a car. If you're looking for an option to keep the kids entertained, giant insect and art exhibits at The Science Museum of Virginia will keep them busy.

Where to stay: You'll find some lower-category Marriott Bonvoy properties in the city, from the Westin Marriott to the Delta Hotels Richmond Downtown, starting around 25,000 Marriott points a night. If it's something smaller you're after, try the pet-friendly Graduate adjacent to Virginia Commonwealth University that also has a rooftop pool and bar.

Where to eat and drink: The West Coast is famous for its burger chain In-N-Out. The South has its own version: Cook Out. It's nothing fancy, but if you're looking for something quick to eat, I recommend the Cook Out tray: cheeseburger, a corndog or hush puppies and a Cheerwine float, all for under $10. If you want something better than fast-casual, Stella's is known for its Greek food, while Rappahannock Restaurant is the place to go if you want seafood. Richmond also has an incredible beer culture, so definitely check out some breweries in the area, like Hardywood Park Craft Brewery, a 12,000 square-foot warehouse with outdoor seating and food trucks, or Canon & Draw Brewing Company.

What to do: Even if you're not that familiar with the Maryland Eastern Shore, you've probably seen videos of horses frolicking on the beach. That's in Assateague (you'll also see ponies at Virginia's Eastern Shore). Folklore says the horses arrived on the Eastern Shore after surviving a shipwreck off the coast of Virginia. They're beautiful in person, but make sure you don't get too close -- they're known to kick at humans! If you're looking for a beach with a bit more action, Ocean City is extremely popular in the summer.

Where to stay: There are a couple of points hotels in the area, but if you really want the full Eastern Shore experience, I recommend staying at a bed-and-breakfast, like Crow Farmstay B&B, Vineyard & Winery, a top-rated B&B on TripAdvisor, or the Oaks Waterfront Inn in Easton.

Where to eat and drink: The Eastern Shore is close to the water, so you'll find tons of seafood restaurants, like The Narrows Restaurant or 1 Fish 2 Fish Crabs & Seafood. Sobo's Wine Beerstro in Salisbury is also a solid choice if you're a craft beer lover.

First things first: there's Fairfax, Virginia, the city, and then there's Fairfax County, Virginia. The City of Fairfax is an independent city surrounded by the separate political entity Fairfax County. I know, it's confusing. Anyway, the area is chock full of things to do, see, eat and drink.

What to do: If you're into nature, I can't recommend Great Falls Park enough. You can spend the entire day hiking and white-water rafting. If you want something more low-key, then the Meadowlark Botanical Gardens is a relaxing option. Fairfax County is also home to a ton of history, so you might want to stop by Manassas National Battlefield Park, the site of the Civil War's first major clash or Mount Vernon.

Where to stay: The Ritz-Carlton Tysons Corner is perhaps best known for its amazing spa. You can laze the day away with a hemp-infused CBD pedicure, a cherry blossom mani/pedi, or with a couple's massage. The Tysons Corner area is pretty far from Washington, however, several rooms and suites have D.C. skyline views, so you'll want to pick those if possible. As a Category 5 hotel, rates start at 30,000 for off-peak dates, 35,000 for standard and 40,000 for peak dates.

Where to eat and drink: The Winery at Bull Run is a working farm vineyard that crafts Virginia wines and is the closest winery to D.C. The Eden Center in Fairfax is home to some of the best Vietnamese food in the state. With over 30 authentic restaurants to choose (note that all are takeout only at the moment), you're bound to find something that suits your palate.

What to do: You can't visit Baltimore without visiting some of its most popular neighborhoods—Inner Harbor, Fells Point or Little Italy. For modern and contemporary art, head to the Baltimore Museum of Art. If you're a sports buff, stop by M&T Bank Stadium, home to the Baltimore Ravens, or Oriole Park at Camden Yards.

Where to stay: The quaint neighborhood Federal Hill has several Airbnb options if you want to stay in one of the town houses the neighborhood is known for. Otherwise, there are several points hotels in and around Baltimore. The Hyatt Regency (at 12,000 World of Hyatt points a night) is close to the popular Inner Harbor. If you're low on Hyatt points, you might then want to consider the Hyatt Place Inner Harbor or Hotel Revival Baltimore, both for 8,000 points a night. You'll also find some lower-tier Marriott and Hilton hotels scattered around the city starting around 20,000 points a night.

I also want to note here that it's pretty easy to get from Washington to Baltimore if you don't want to drive. You can hop on the Amtrak, which shouldn't cost more than $15 for a one-way ticket to Baltimore-Penn Station. The $7 one-way MARC train is also an option from D.C. if you're looking for something even cheaper. It's about a 45-minute trip from Washington's Union Station, and also makes stops at Baltimore-Washington International Airport (BWI).

Related: 7 Reasons Baltimore Should Be Your Next Travel Destination

Where to eat and drink: When you think of Baltimore, the first thing to come to mind: crabs and crabcakes. You can find some of the best crabs at Bo Brooks Crab House and if you want crabcakes, check out Faidley’s Seafood.

Seafood isn't the only thing Baltimore is known for, either. You can also grab some excellent soul food in the city, a nod to Baltimore's rich African-American culture. I strongly recommend stopping by Ida B's Table, a beautiful warehouse restaurant with a modern take on soul food.

TPG's resident Baltimore expert Benet Wilson recommended several additional restaurants: "[You can find] great Afghan food at The Helmand, a spot owned by the brother of former Afghan President Hamid Karzai. Cafe Zen has some of the best Chinese food in the city. Paper Moon Cafe is a great breakfast stop. R. House has a rotating group of great eateries from poke to tacos."

Featured image by (Photo by Susie Ho on Unsplash)
Editorial disclaimer: Opinions expressed here are the author’s alone, not those of any bank, credit card issuer, airline or hotel chain, and have not been reviewed, approved or otherwise endorsed by any of these entities.