7 Reasons You Shouldn't Stay at the Cadillac Hotel in Miami

Articles
Nicky Kelvin is the director of content and face of TPG UK, and is also an award-winning photographer. Before joining TPG UK, he was a record label lawyer and avid traveler sharing points wisdom as the "Miles Mogul."
Follow
Dec. 13, 2018
•
10 min read 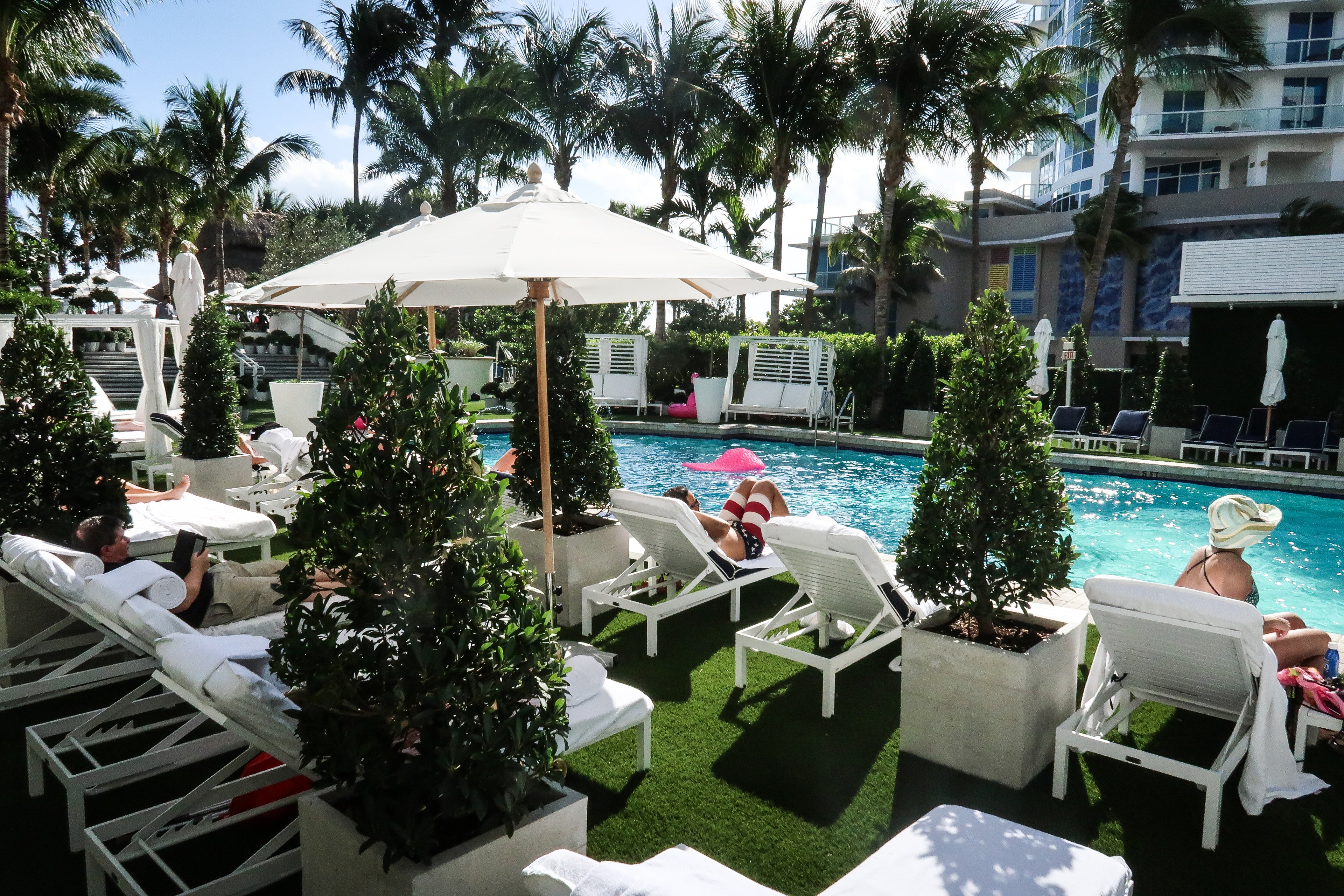 Art Basel is a busy time in Miami. All the hotels are bursting at the seams with travelers in town to enjoy world class art — and world class afterparties.

Could there be a better time to put a newly renovated hotel to the ultimate test during its soft launch period?

The Cadillac Hotel and Beach Club is a Marriott Autograph Collection property bookable with Marriott for 50,000 points per night. We paid 200,000 points for a five-night stay (and with the fifth night free, the average nightly cost came down to 40,000 points). It was a reasonable deal during Art Basel, when prices skyrocket. But the following week, rates dropped to $213 per night, so a cash booking may make more sense at quieter times.

I was looking forward to trying out the much-anticipated property, which emerged from a multimillion dollar refresh this fall. But the entire experience was truly a comedy of errors.

In the hotel's defense, it was a busy period, and all my encounters with the staff were positive and friendly. However, the failures (and execution of follow-up promises by those same employees) were shockingly bad. After this experience, I would caution against a stay at the Cadillac Hotel until the property resolves these issues.

On my very first night, I was woken at 5:30am by a maintenance worker aggressively drilling into the wall outside my bedroom. Meanwhile, there were staff members speaking loudly on radios outside my room, and even the elevator lobby music was blaring through my bedroom door. It took six phone calls to stop the racket.

In the days that followed, I asked repeatedly what the maintenance worker was doing at that time in the morning. Various staff promised to find out and let me know, and I still have no answer.

The following morning, I had meetings all day in Fort Lauderdale. The hotel staff promised that if I packed my bags and left them by the door, they would move them to a better room away from the elevators while I was out.

I returned to the hotel, bleary-eyed, around 2:30am. I was ready to crash in my new quiet space. New keys were handed over, and I headed up. I entered the room, which was disappointingly much smaller than my previous one and complete with a growling air conditioning (there was no way of sleeping through that noise). But my bags were nowhere to be seen.

I went back down to the lobby, taking the stairs from the 8th floor because they failed to announce that a set of elevators are shut down at night. After sidestepping discarded room service plates, I found the stairwell blocked off on the third floor by locked gates. So I had to take two separate flights of stairs to reach the ground floor.

When I reached the front desk, I explained to the agent on duty that there were no bags in my new room. He had no idea what I was talking about. "Do you know where your bags are, sir?" he asked me by way of response. I did not. Nobody did.

It was 3am before someone finally located my bags. My iPhone charger had disappeared in the mess, but I was grateful to be reunited with my belongings. The staff promised to replace the cord, but once again the promise did not materialize. Eventually, one of the staff members lent me their own personal cable.

And though I was originally told the hotel was completely full, yet another-- and much improved -- room materialized after this. I was sent up with my bags after refusing help (I didn't want to take any risks). I opened the door to find a stunning suite. Surely, I thought, everything would be perfect moving forward.

Peeling back the fresh covers on the bed in my fabulous new suite, I found damaged, torn linens. It was a small but disappointing discovery in a premium room in a just-revamped Category 6 hotel.

4. The Food and Beverage Service Was a Disaster

The hotel failed time and time again to deliver food and beverages in a reasonable time.

Room service breakfast, for example, took 50 minutes to arrive — and when it did, the order included the wrong items, and an impractical pitcher of water for brewing tea with the one tiny sachet provided.

Lunch on the beach (a very delicious tuna tartare — no complaints about the flavor!) took a full hour to arrive.

And most horrific of all, it took them 45 minutes to serve the all-important afternoon glass of frozen rosé.

The hotel charges a $30 per night resort fee. This is not unusual for comparable properties, but there is a level of expectation as to what is included.

It is reasonable to assume that a hotel self-titled a "Beach Club" would provide beach umbrellas free of charge. Not at the Cadillac, where a $22 daily charge is applied. That's a cool $110 umbrella fee for your five-night stay. It's a good thing they provide a complimentary tub of SPF 50 by the pool.

6. They Won't Do Your Laundry

Hotel laundry charges are notoriously steep, and the Cadillac is no exception. But here, they simply don't bother to wash your clothes.

When I came back to the hotel room Sunday evening, I found the clothes had been returned to my room. Unwashed. Staff members claimed they were "looking for me all day" (whatever that means) and they didn't want to process the laundry without me first approving the express charge.

In addition to me explicitly agreeing to this fee, I believe a great hotel would have washed the clothes regardless. The absolute worst case scenario for the property would be having to swallow the express charge. Instead, they were left with no revenue at all from the otherwise expensive service, and a very unhappy customer with dirty clothes.

7. You Will Constantly Repeat Yourself

Communication between the staff seemed completely nonexistent. Each time I approached an employee at the front desk with an issue, I had to start from the very beginning.

The list of mishaps caused by poor communication is lengthy. The location of my bags and my confirmation of the express laundry charge, for example. They also never relayed information I requested about the drilling.

Even positive changes (details about my room change; the fact that the resort fee had been waived as an apology) got totally lost. The staff even gave me different, conflicting answers and bickered about who had agreed to what while standing right next to each other.

One manager had taken my number, and we chatted via WhatsApp as he tried to improve the situation. But again, he didn't follow through on any of those promises. And when I was finalizing the bill on the last night, someone must have contacted him, because I received a message from him saying, "Whats going on???" Not the most professional correspondence I've received from a hotel manager.

After a 30-minute discussion, I was made to feel grateful that the resort fee would be waived, and the meal charge on the beach would be waived (both amendments were already agreed upon days before).

Even as I checked out at 6am the following morning, problems continued. While rushing to get to the airport, tired and grumpy, the desk presented me with a bill with every single charge listed. The entire conversation had to take place again, before the agreement from the previous evening was reached (again), and the bill duly reduced. Again.

New hotels almost always need time until they're running at full speed. But after three months in operation, I expected so much more from the Cadillac Hotel and Beach Club.

The renovation is tasteful and beautiful, and aside from the lack of a spa, the facilities are also great. The friendliness of staff can't be faulted either, though the service across the board was terrible at every turn.

Following my disastrous stay, the hotel asked me to return for a weekend, so I could be shown what the team can really deliver. But I'm not sure I would take them up on the offer, because though I would usually expect to be treated to the greatest service possible in that situation, I'm not even confident that would be the case with the Cadillac.

Want to know more about this new Miami Marriott? Check back soon for a full review of the hotel, and perhaps even a follow-up report to see if the Cadillac remains all fur coat and no knickers.