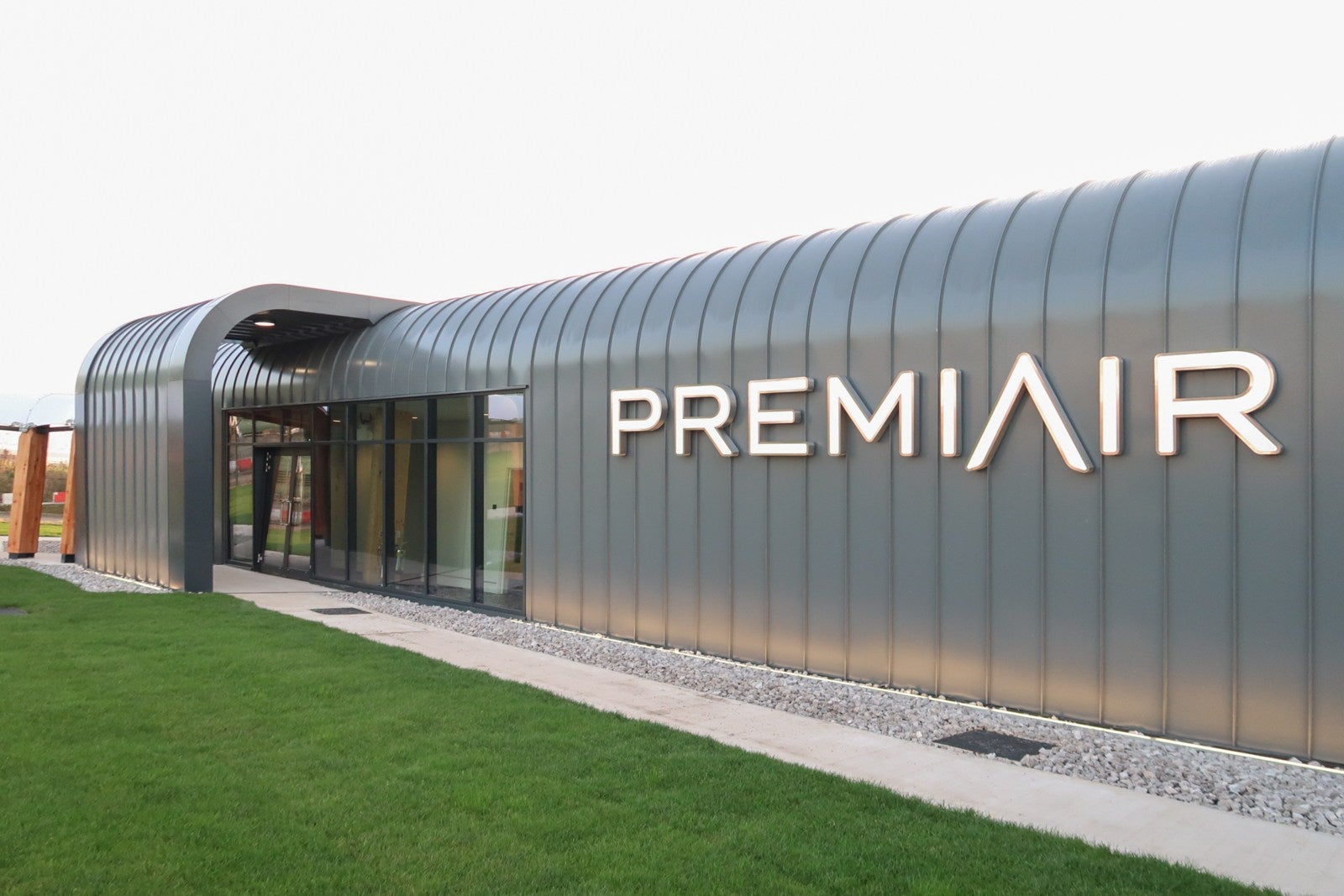 At TPG, we're all about maximizing your travel, whether that's letting you know about cheap deals to all over the world or giving you tips and tricks to earn more air miles. We take airport lounges seriously, too.

So, when we heard that Manchester Airport (MAN) was taking airport lounges to the next level by opening an entire, private, VIP terminal called PremiAir, we had to go check out this ultra-luxe experience.

You can book Manchester's brand-new private terminal experience for both departing and arriving flights or even a round-trip, if you really want to treat yourself. Inquiring about a reservation is simple and straightforward. All you need to do is head to the site and fill out the form.

Initially, I was trying to book for an afternoon flight but couldn't find any availability.

I called the advertised number and spoke to an agent who explained that the PremiAir Terminal was only available during the morning for a while, as it had just opened. From Dec. 1, the terminal will be open from 4 a.m. until 10 p.m. every day.

If you're departing, there are two packages available, depending on the level of luxury that you'd like. The best bit? Packages start as low as £50 ($65) per person for the Priority Departures experience. Both include luxury, private transfers to your departure gate. Premium Departures is double the price, but with this you also get access to the lounge's food and drink menus as well as the ability to check luggage.

For arriving passengers, there is one package available for £125 ($160). The price includes private BMW transfers from your aircraft to the PremiAir terminal, dedicated passport control with no lines and a relaxing experience in the lounge while you wait to have your luggage delivered to you.

I received two phone calls before my visit. The first was a courtesy call to thank me for booking. It also acted as a reminder to fill in my passenger information online no less than 24 hours before my visit for security reasons. The second was a gentle and polite reminder to do so, as I had indeed completely forgotten.

Getting there is easy. The PremiAir Terminal is slightly southwest of the main airport complex and right next to the runway and taxiway.

There are plenty of sign posts along the way to make sure you don't get lost.

When I arrived at the entrance to the driveway around 7:30 a.m., there was a security guard who asked for my name then allowed my Uber driver to drive me up to the terminal. And what a sight to arrive to. The terminal had a beautiful, futuristic design, kind of how I would imagine airports will look in 100 years.

Before my car had even come to a stop, an employee was already on his way to meet me, take any bags and escort me to the terminal. The greeting was so friendly, professional and almost too formal -- which is only to be expected from such a VIP establishment. I quickly said it was perfectly fine to call me Daniel instead of Mr. Ross, and then we all felt more comfortable.

There was a covered walkway leading from the drop-off zone right up to the entrance.

Once inside, I was greeted, again, by my name, and the lovely check-in agent already knew my airline and destination. I was asked to show my passport and boarding pass, then if I had any luggage to check in. As I had only been in town for a one-night stay in Manchester, I only had my backpack. If you do have luggage to check in, it will be taken from you at PremiAir's reception during check-in, and you will see it again when you arrive at your final destination.

A few seconds later, I was shown into the lounge. I think I actually uttered a "wow" when I walked in. The floor-to-ceiling glass wall facing the airport runways filled the space with so much light, showing off the stunning exposed wood and beautifully coordinated decor and furnishings. It really was quite something.

As I'd had an early start, I'd had no breakfast, so couldn't wait to eat. No sooner had I sat down then I was handed a menu and told I could have anything I wanted, including creating my own version of a full English.

First things first, though: I ordered a coffee, which came about a minute later. I tried to be healthy and go for avocado on toast with a poached egg, but I caved and also ordered a side of mushrooms, sausages and the two types of bacon that were on offer. While I waited for breakfast to be served, I sat in my cozy corner spot and watched the morning rush hour go by.

It wasn't long before my food arrived, and it was absolutely delicious and tasted so fresh. The poached egg was, well ...

It must be said, I was the only person booked into PremiAir that day, hence why the VIP treatment felt more like VVVIP treatment. It's clear that the staff have been hand-picked for their industry experience and their love of their job, which I noticed right from the start.

On the topic of food and drink, the alcoholic beverages on display were not self-service. This was because the PremiAir Terminal was still landside and had different licensing from airside lounges. I liked that there were two Manchester gins available.

The pastries and sweet treats, on the other hand, were every man for himself.

Coffee snobs rejoice: You had the choice of coffee made by a proper machine or Nespresso capsules.

After eating, I explored the lounge. The area itself was not huge, but it didn't need to be, as that would have made the space feel less VIP-like.

There were various different seating and table options in the lounge, including relaxing at the window with a view or having a quick coffee meeting before your flight.

There were charging points at various points in the lounge, including by the window, so you could work and planespot at the same time.

About halfway down the middle of the lounge were two partitions that could turn the lounge into one main lounge and two smaller lounges.

The would-be third section (farthest away from the main entrance) could be accessed by a completely separate entrance to accommodate those requiring even more privacy. Passengers would enter through a side door and walk straight into a small bar area.

That entrance would be followed by this view. The area would be perfect for a group meeting or a preflight meal with family or friends.

The bathrooms were unisex and, as you'd expect from a luxury, new build, modern and perfectly clean.

The hand wash and hand balm were by European favorite Rituals.

After exploring the space, I had some time to kill before I had to go through security and be taken to my gate. It really was the perfect spot for an AvGeek. I could have stayed for hours watching the passing aircraft during the morning rush.

After taking a few more pictures with the help of the photographic skills of the PremiAir staff, I was shown the way to the private security area, where there was a small team of security staff ready to assist me. My boarding pass and passport were checked, my bag was scanned, and I walked through the body scanner, much like the usual airport process. The difference was that I was the only person and it took all of about 20 seconds.

I didn't get any photos of this area, as the usual rules regarding photography applied here, too.

Next, the ride to my ride: Forget long corridors and moving walkways. PremiAir took a leaf out of Lufthansa's book and drove me directly to my gate.

The back of the terminal was as beautifully designed as the front, and as I walked out onto the driveway I was immediately hit with the sights, sounds and smells of aviation.

After some more photos, I was then shown to one of five BMW 7 Series. It would have been fun to race a plane down the runway, but instead we had to stick to the slow speed restrictions around the airport.

Safety, as always in aviation, was a top priority of the PremiAir staff even inside the car to the terminal. I was explained the dos and the don'ts and shown how to use the entertainment system. From the giant screen (bigger than many long-haul economy flights), I was able to follow our journey around the airport, change the temperature, check the weather and listen to music.

The short journey from the terminal to my gate meant even more planespotting, like watching this Paris-bound Air France A319 taxiing to the runway.

There were some sober sights, too. As Manchester was such a huge base for the now-defunct Thomas Cook, many of the airline's aircraft were resting idle around the airport. Quite a sad sight, indeed.

Once at the main airport terminal, I was escorted from the tarmac up to the gate, where I boarded the plane in adherence to British Airways' boarding sequence. Your experience might be slightly different from mine here, as this process will vary depending on the airline and also whether you're a domestic or international passenger.

Is it worth the money? Without a doubt. Lounge access within the terminal varies from £25 to £35 ($30 to $45) per entry without the added privacy, dine-on-demand food and chauffeur to the gate.

Whether you're starting a vacation or arriving in Manchester for an important business meeting, PremiAir makes for the perfect spot. I had no expectations before my visit, as I had never had an experience like it before. All I can say is that I was wowed from start to finish. The combination of unmistakeable Mancunian charm and warmth that I received from the staff throughout my stay, as well as the fresh, made-to-order food all wrapped up in the most beautifully designed building and interior -- not to mention the cherry-on-top views of the runway -- made for an experience that I want to relive again as soon as possible.