Watch: Mom and Dad have no idea their son is piloting their flight

Articles
Katherine Fan is a former senior travel features reporter at The Points Guy who covered everything from personal finance to travel and aviation.
Dec. 20, 2019
•
9 min read 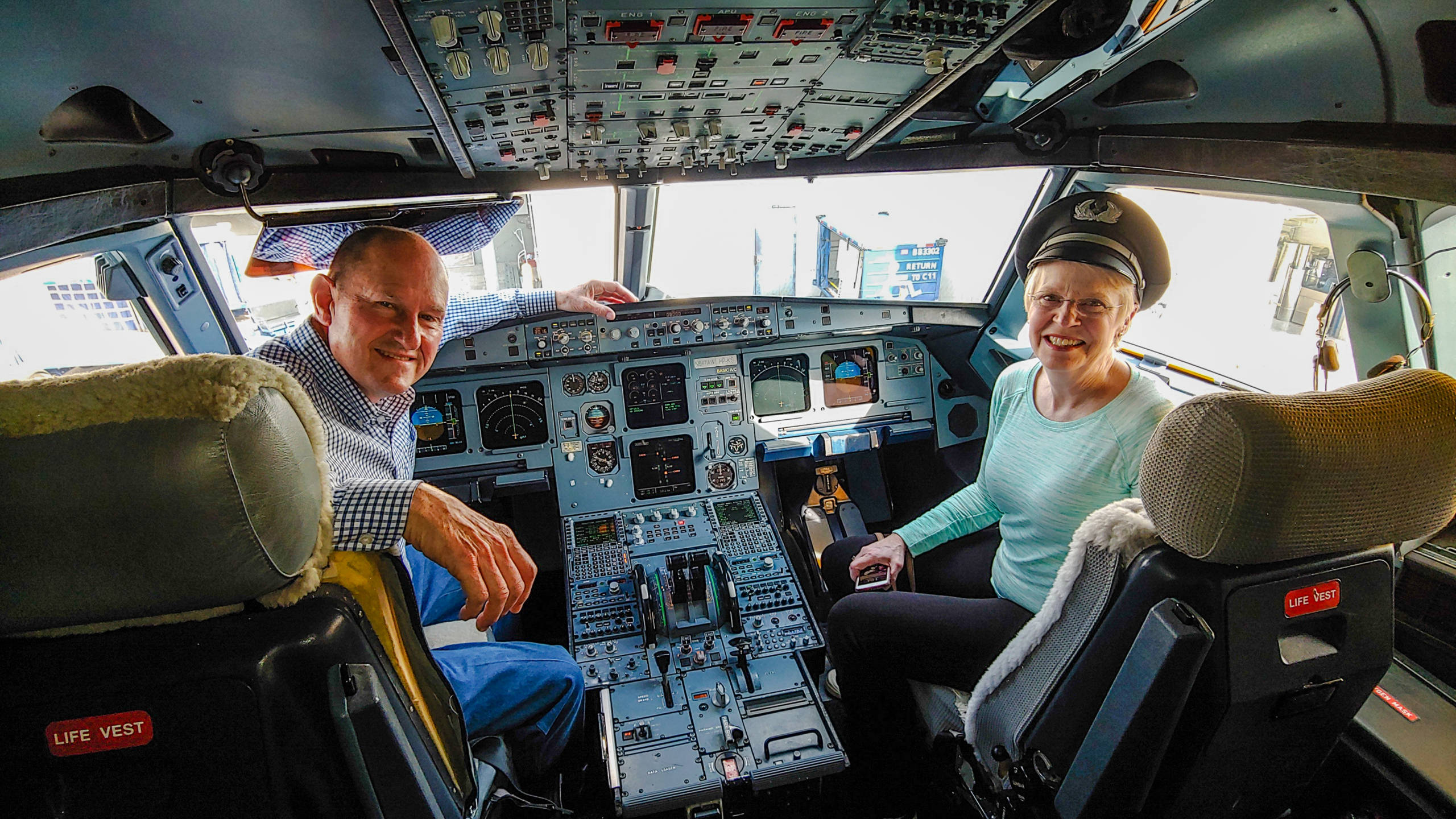 Watch: Mom and Dad have no idea their son is piloting their flight
This post contains references to products from one or more of our advertisers. We may receive compensation when you click on links to those products. Terms apply to the offers listed on this page. For an explanation of our Advertising Policy, visit this page.

Michael Lowe doesn't make a habit of lying to his parents, and he definitely tries not to make his mom cry. But when he does, he makes sure it's for a good cause — and that it's all captured on video.

Michael, a pilot for American Airlines, enlisted a number of coworkers to help him surprise his parents, Bob and Kathy Lowe, on a recent flight from Kansas City (MCI) to Charlotte (CLT).

'A couple of white lies'

"With a lot of planning, a little luck, a couple white lies, and some help from my captain, flight attendant, gate agent, and a traveling employee willing to give up her seat in the cabin to sit in the jumpseat, I was able to surprise my parents by being their pilot on a recent flight from Kansas City to Charlotte," Michael said on Facebook Thursday night.

The adorable video shows Michael's mother boarding the flight, doing a double-take and exclaiming, "Oh my God! Oh my God!" before giving Michael a bear hug and dabbing her eyes in disbelief. In proud mom fashion, she can be heard bragging to the other travelers, "This is my son!"

"I told Mom and Dad that I had a dentist appointment that morning, so I couldn't answer my phone or texts," Michael told The Points Guy. "When we pulled into the gate I pulled my sun visor down in front of my face and kept my hat and sunglasses on just in case they were trying to look in the cockpit — turns out, they actually were trying [to look for me]."

Michael's parents ended up going to the wrong gate, where a gate agent told them that the outbound flight was waiting on parts to be flown in and might not depart at all. As parents do, they texted Lowe about the supposed issue. But as Michael told TPG, "I couldn't exactly text back, 'No we're not! I just flew it in and have no write ups!'"

Michael, who was serving as the first officer on board that day, had the full support of his captain, who took it upon himself to conduct the walk-around for the flight and communicate with the gate agents to help Lowe stay hidden. The captain also asked a traveling employee with a reserved seat if she would be willing to take a jump seat in order to accommodate Bob on the flight. The off-duty flight attendant graciously agreed, and both pilots gave up their company meals in order to offer one to her as a thank-you.

While all these machinations were taking place on board amongst the working crew, the staff at the gate were working hard on plans of their own. Bob and Kathy were flying standby, utilizing the airline perks afforded to family members of AA employees. Before the flight attendant volunteered her seat, there weren't enough seats on the flight so Bob and Kathy had to decide which would go first, and which one of them would wait for the next plane out to Charlotte. So the parents decided to have Kathy travel first, which resulted in the sweet moment captured on camera.

Bob's surprise didn't make it to video, but was just as heartwarming. The gate agent, who didn't fully understand that the situation was supposed to be a surprise for Michael's parents, tried to make small talk as he escorted Bob down the jetbridge, saying, "It's cool that your son is flying." Bob said yes, his son is a pilot for American, to which the gate agent responded, "No, he's flying this plane!" Bob tried to correct him, explaining that Michael lives in Charlotte and was at the dentist's that morning. But the gate agent said, "Why do you think we're trying so hard to get you on [this flight]?"

Once the flight had departed and reached cruising altitude, First Office Lowe made a special announcement. "Ladies and gentlemen from the flight deck, this is first officer Lowe speaking. We appreciate all of you choosing to fly with us on American Airlines today, and I would actually like to take just a moment to recognize and share a sincere thank you with two very special passengers back there this morning. Those passengers are my parents, Bob and Kathy Lowe. They have encouraged and supported me all throughout my life, and my career progression so far as a pilot. Without them, I wouldn’t be where I am today, flying you fine folks to Charlotte. So thanks, Mom and Dad."

"I had a few passengers and at least one flight attendant say I made them cry," Michael told TPG. In true parental fashion, Bob and Kathy spent the flight basking in praise from fellow passengers. "Dad said the lady next to him gave him a high five after my really smooth landing," Michael said. "She told me on her way out that she really enjoyed sitting next to [my dad], and felt like she was sitting with a celebrity. And Mom said that... a man from Australia in fatigues sitting next to her... was really excited to hear what was going on. Then after my announcement, he said something about how much better that made it, and it’s a memory he looks forward to sharing for a long time."

"Later, [my parents] told me that there was a round of applause for me," Michael said. "I corrected them and said the applause was actually for them."

"My parents were incredibly supportive"

Michael now has more than 8,000 flight hours under his belt. But aviation wasn't always in his life plans. "I didn't grow up wanting to be a pilot," Michael told TPG. "I actually wanted to be a veterinarian. It wasn't until I started skydiving for my 16th birthday — something I had told my parents I wanted to do at 10 years old — that I started being around aviation.But Michael has always had a thing for being up in the air, he said "From a bunk bed — just because — when I was little, to competing in hurdles, triple jump, and pole vault, diving lessons, a trampoline, and bungee jumping at 13, I've always had a thing for being airborne."

So Michael and his dad began skydiving together after that momentous 16th birthday. The father-son duo organized a group of nine jumpers for the birthday trip, but Bob and Michael continued the sport, earning their licenses together. "[My dad] was 46 years old for his first jump, and got almost 900 jumps over the next 12 years, including getting back into it just months after an emergency double bypass," Michael told TPG. "I jumped about 600 times and flew about 2,000 loads of skydivers while building time to become an airline pilot."

Michael credits his parents for helping him soar. "My parents were incredibly supportive throughout my life in all ways, and paid my way through college," he told TPG. "I had an academic scholarship and various part time jobs, but it only covered a fraction of the total cost."

Michael attended a night ground school at the Kansas City Downtown Airport toward the end of his junior year in high school, and enrolled in a Quick Start college education program during his senior year so he could get out of school early each day to attend classes at the local community college. On days where he didn't have class, Michael took flying lessons, earning his private pilot's license just one day before driving up to the University of North Dakota to earn his degree in commercial aviation.

Michael's flight with Bob and Kathy was particularly special for another reason: That day was the first time Kathy had flown with Michael as her pilot in nearly 20 years. "The last and only previous time I had flown Mom was Dec. 22, 1999," Michael told TPG. "I had 190 total hours. Today before takeoff, I had 8,011 total hours (2,388 in the Airbus)."

Bob and Kathy aren't the only family members who have supported Michael's high-flying dreams. He met his wife, Janessa, at UND in flight training. "The two of us were dating in college when we secured two of the 10 intern positions at American Airlines," a highly competitive pool that drew applicants from aviation college programs across the nation. "UND got 3 of the slots, two being the two of us."

After graduation, Janessa flew as a pilot for Republic, which was US Airways Express at the time, before putting her career on hold to raise the couple's three sons.

Without his family's support, Michael told TPG, "I wouldn’t be where I am today."

All images and video courtesy of Michael Lowe.