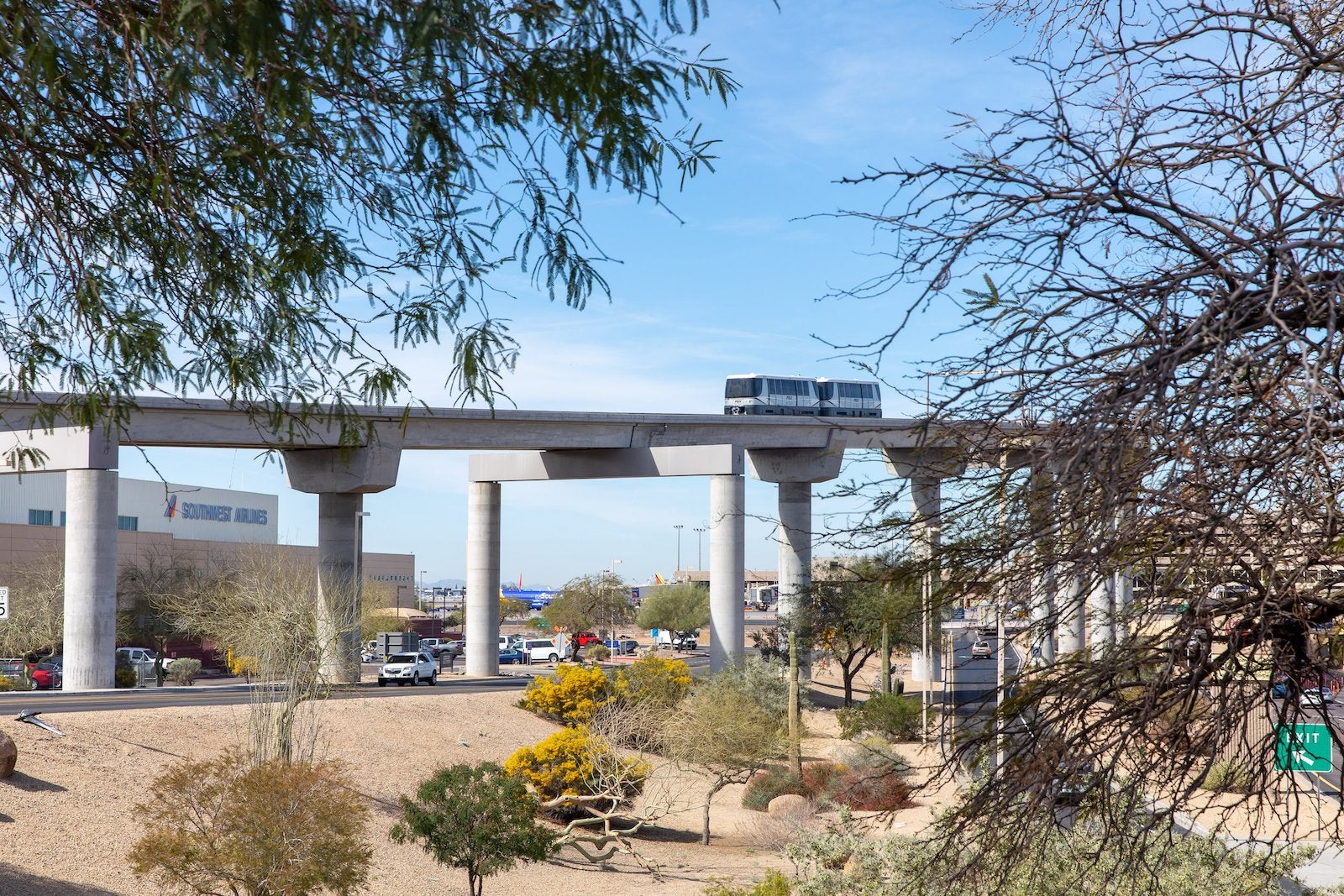 Within the new few months, getting to the rental car center is going to be a much easier process for travelers landing at Phoenix Sky Harbor International Airport (PHX). Crews are on target to finish a new extension of the airport’s Sky Train by the end of the year, airport officials told TPG. Once it is operational, passengers will no longer have to take a shuttle bus between the terminals and the rental car center.

Right now, testing is underway on Phase 2 of construction on Phoenix’s Sky Train. Sections of the line’s first phase opened in 2013 and 2014, connecting Terminals 3 and 4 to economy parking east of the airport and regional light rail.

The Sky Train’s first phase has served millions of passengers over the better part of a decade since opening. But travelers arriving at and departing from Phoenix have still faced a rather dated and inconvenient trek to the rental car center by shuttle.

That’s all set to change.

When you arrive in Phoenix today, you can use the Sky Train to connect to the city’s largest mass transit system.

After catching the Sky Train from Terminals 3 or 4, it’s a short ride — after a stop at east economy parking — to the 44th Street/Washington station where you can access Valley Metro Rail, the Phoenix area’s light rail system. Trains typically run every three to five minutes, 24 hours a day.

The system, which is free to ride like most similar systems at U.S. airports, served an average of 14,600 passengers each day prior to the pandemic, airport officials said. That exceeded expectations.

Once complete, the Sky Train’s line will run all the way from the 44th Street/Washington station at one end of the line past the terminals to the rental car center at the other end of the line. In all, it will encompass five miles and an estimated 13 minutes of ride time from one end to the other.

The Sky Train’s new phase includes the construction of two new stations: one at the rental car facility and another between the rental car center and terminals at 24th Street, which will include 1,600 additional economy parking spaces, along with additional curbside pick-up and drop off areas for passengers — something the airport says will reduce congestion at the terminals and improve freeway access for travelers arriving at Sky Harbor from the west.

If you’re traveling to Phoenix and renting a car, you can certainly expect things will get a lot quicker and more convenient. Leaving from Terminal 4 — which serves American and Southwest Airlines passengers, among others — it’s expected to be an eight-minute ride to the rental car center. From Terminal 3 — which serves a long list of airlines including Delta, United, and JetBlue — the ride time to the rental car center is estimated at around six minutes.

The project is an example of where some of those extra fees you pay during your travels go: the estimated $745 million Phase 2 bill is being footed by rental car customer facility charges and airline passenger facility charges, the airport says.

testing is ongoing, but the opening is 'on target'

Right now crews are conducting rigorous testing of the Sky Train, which means frequent overnight shutdowns of the line. For that reason, if you arrive late at night or in the early morning hours, you may be directed to a shuttle even if you’re trying to connect with parking east of the airport or Valley Metro Rail.

Testing is an especially complicated portion of the project, and officials note an opening timeline for the new section of Sky Train is “pretty general” until testing is sufficiently completed. “But we are on target to get it open this year,” airport officials told TPG.

If the newest section of Sky Harbor’s Sky Train opens by the end of 2022, it will come just months after the airport unveiled its newest eight-gate concourse in Terminal 4 in June, serving Southwest Airlines.

That, combined with better access to economy parking and, most notably, rental cars, should mean a smoother passenger experience. That's good news for travelers and the greater Phoenix area as the region prepares to host the Super Bowl in February.

Featured image by SKY HARBOR INTERNATIONAL AIRPORT
Editorial disclaimer: Opinions expressed here are the author’s alone, not those of any bank, credit card issuer, airline or hotel chain, and have not been reviewed, approved or otherwise endorsed by any of these entities.