Articles
Nicky Kelvin is the director of content and face of TPG UK, and is also an award-winning photographer. Before joining TPG UK, he was a record label lawyer and avid traveler sharing points wisdom as the "Miles Mogul."
Follow
Oct. 01, 2019
•
12 min read 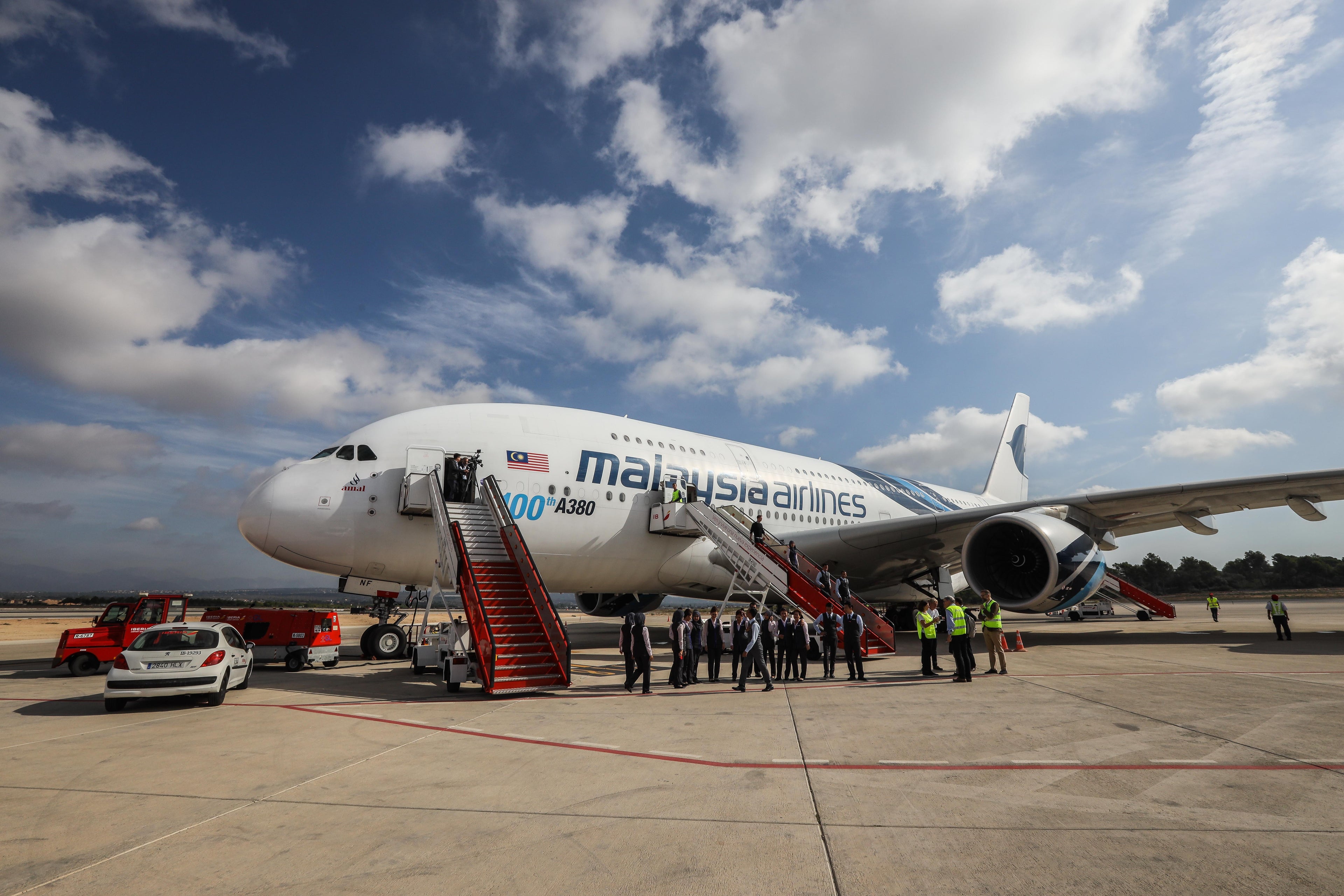 When the British travel company Thomas Cook and its airline collapsed last week, the British government was faced with a huge problem: tens of thousands of its citizens stranded overseas, who had to be brought back. Traveling on tickets issued by an airline that no longer existed, some of them got passage from other carriers that decided to honor Thomas Cook tickets. But that left thousands waiting for a lift back to Britain.

Enter Operation Mattherhorn, the U.K. Civil Aviation Authority's huge project to bring home British tourists who could no longer take the Thomas Cook flights they originally booked. It's the biggest peacetime repatriation in British history, and it often resorts to unlikely airplanes to get people home.

That's how I found myself, on Tuesday, aboard a Malaysia Airlines Airbus A380 — the largest commercial aircraft in the world. I had been invited by the Civil Aviation Authority (CAA) to join a repatriation flight from Palma de Mallorca in Spain to Manchester. Instead of the plain-looking, all-economy Thomas Cook single-aisle Airbus that would ordinarily have taken them from PMI to MAN, hundreds of passengers found themselves on a giant double-decker jet with first-class suites.

The CAA had chartered it for the occasion, flying it on a short European hop instead of the long-hauls from Kuala Lumpur it's normally used for. The people who expected to fly in a tight coach seat but got lavish first-class experience instead were stunned.

The CAA has been hard at work for nine days now. According to the CAA, the organization will operate a total of 39 flights on Tuesday alone, returning around 7,000 passengers to the U.K.

Since the repatriation effort began, the CAA has commissioned 530 flights, flying more than 115,237 passengers on more than 100 aircraft.

The operation is set to continue until Oct. 6, with around 900 flights planned and an estimated 150,000 passengers flying. The CAA says that it's flown 94% of passengers back on the original date of their planned Thomas Cook flight.

According to the CAA, the total cost of the repatriation flights is £100 million. This is in addition to the cost of compensating people for future bookings.

Of the £100 million total, 60% is covered by the so-called "ATOL scheme," or Air Travel Organizers' License, a program whereby airlines pay a fee of 2.50 pounds per passenger (about $3) that then goes into a fund used to repatriate people if their airline fails. The British taxpayer will cover the rest.

The CAA confirmed to TPG that it has relationships with many airlines and leasing companies, holding year-round contracts in anticipation of this sort of event. To date, Operation Matterhorn has utilized many airlines, such as Atlas, EasyJet, Wamos, Avion, Envelop, Titan Airways, Nile Air, Hi Fly and Miami Air.

The Palma pick-ups have been rather special. A nearly seven-year-old Malaysia Airlines Airbus A380-800, registration 9M-MNF, has been plying the Palma to Manchester route for the past week.

Malaysia Airlines usually uses these A380 aircraft for Hajj and Umrah flights, ferrying Muslim pilgrims between Kuala Lumpur and both Medina and Jeddah. The A380s are also deployed on other special charter flights, including private hires for Manchester United, Barcelona and Liverpool football teams. They are operated by a dedicated charter crew, including three captains, Captain Neoh, Captain Norshid and Captain Jay.

The crew said they loved the charter flights, which were always more fun.

As the largest passenger jet in the skies, the size of the aircraft was perfect for consolidating the many Thomas Cook flights that were meant to fly every day to bring all the passengers for that day home in one go. Just last week, there were up to eight Thomas Cook flights scheduled to depart Palma in the morning to various U.K. arrival points.

On Tuesday's repatriation flight, not all passengers were due to fly to Manchester. Some were scheduled to fly to surrounding cities, but given the high-density A380 in service, the CAA arranged for passengers to fly to MAN and then transport them to their final destinations.

Dame Deidre Hutton, chair of the CAA, said Palma was an easy route for this sort of consolidation, with an airport that could handle large aircraft like the A380. She said that certain destinations, like the Greek Islands where many holidaymakers were situated, could not handle such large aircraft because of the short runways. It gave the CAA additional logistical challenges.

This Malaysia Airlines A380 aircraft features 486 seats across three cabins. There are eight Business Suites seats in a 1-2-1 configuration — each with a seat pitch of 89 inches and lie-flat bed with a width of 40 inches. (The airline calls those Business Suites, but they are the equivalent of first.)

There are 66 business-class seats in a 2-2-2 configuration — each with a seat pitch of 76 inches and lie-flat bed.

Then, there's a high-density-configured 412 economy seats, which are arranged in a 2-4-2 layout on the upper deck and 3-4-3 layout on the main deck.

In my experience on Tuesday's flight from PMI to MAN, travelers were bussed to a remote stand, with many gawping at the sheer size of the plane as the doors of the bus opened. The gawping continued as passengers took their seats.

There was a sense of excitement, especially from ground staff who seemed enthused by the presence of such a large aircraft at an airport usually awash with A320s and 737s.

Shortly after takeoff of flight MH8493, the crew served complimentary hot and cold drinks, with Thomas Cook-branded cups — a bizarre image coming from the defunct airline.

CAA Chair Dame Deirdre Hutton said a few words over the loudspeaker, thanking passengers for their understanding and Malaysia Airlines for its assistance. Aside from the strange aircraft and airline being operated on this route, the flight passed without any further fanfare.

Passengers that were not actually due to fly into Manchester were then assisted on the ground by the CAA and boarded coaches to the various destinations which include Birmingham, Glasgow, Newcastle, Gatwick and East Midlands.

One of the most fascinating aspects of this repatriation flight was the fact that seats were selected for passengers at random throughout the aircraft and cabins. Families originally booked to fly down the back of a narrow-body Thomas Cook plane found themselves in the lap of luxury on a seat that converted into a lie-flat bed.

Matt Goldie, Sue Goldie and Tom Goldie, as well as Tom's girlfriend Casey, were assigned Row 1 in Malaysia Airlines' Business Suites and were much delighted. Not only were they were lucky to be in fantastic suites, but they also had an original arrival point of Manchester, so they didn't need to take a bus after landing in the U.K. Casey, who dealt with the logistics, said she had to spend a decent chunk of time working out what was going on.

Sid from Birmingham also couldn't believe his luck that he ended up in the suites. He had already put a deposit down with Thomas Cook for a holiday to Tenerife and was in the process of recovering his money.

Passengers in the business-class cabins also seemed delighted, but for the passengers who ended up in economy had more legroom, comfort and inflight entertainment screens than they otherwise would have got on their original flights.

All the passengers I spoke with were returning home on their original return date and had not had holidays cut short or been left stranded. Many also said that they were not put off from booking package holidays in the future, especially in light of the level of protection and assistance they felt they had gotten despite the collapse of Thomas Cook.

The Civil Aviation Authority has undertaken a huge task. The sheer logistics of bringing home 150,000 people have been executed with the least disruption possible to people who might be on their only holiday this year.

And with the effort to get passengers home, the agency now has another task at hand — getting eligible passengers their refunds, which could take up to two months.

All photos by Nicky Kelvin/TPG