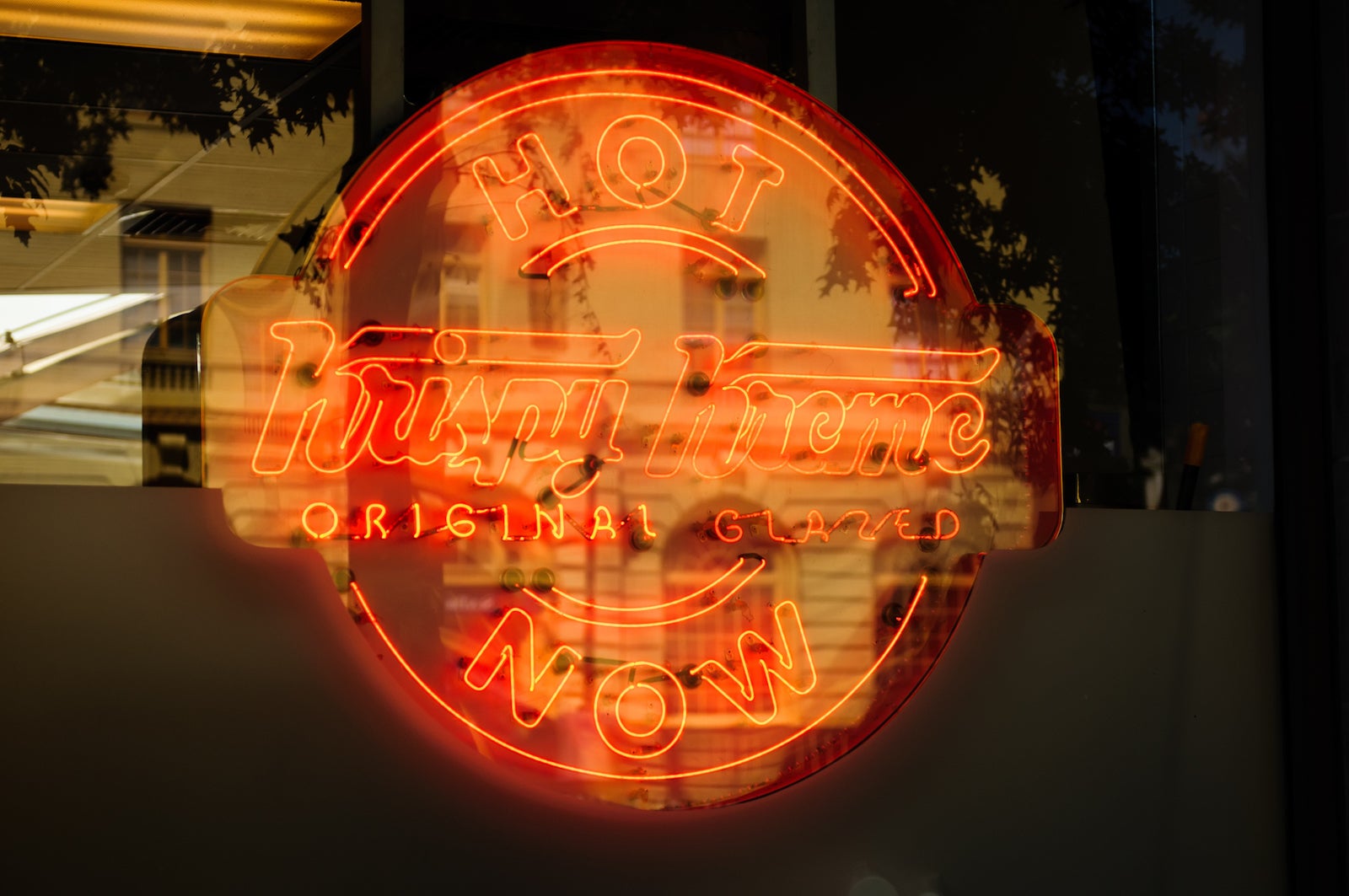 We Went to Krispy Kreme's Only NYC Location Before the Times Square Flagship Opens Next Year
This post contains references to products from one or more of our advertisers. We may receive compensation when you click on links to those products. Terms apply to the offers listed on this page. For an explanation of our Advertising Policy, visit this page.

Krispy Kreme announced on Monday that it plans to open a "first-of-its-kind flagship" location in the heart of New York City's bustling Times Square.

The 4,500-square-foot store, slated to open in early 2020, will feature the world's largest "Hot Light" — the sign informing customers the doughnuts are fresh — and be open 24 hours a day for those late-night doughnut binges. It's expected to serve more guests annually than any other Krispy Kreme location on Earth.

For New Yorkers unfamiliar with the southern institution, perhaps an "iconic glaze waterfall" will win you over.

If you haven't experienced the sweet, hot taste of Krispy Kreme (this is not an #ad but I'm a huge fan) the waterfall is the doughnut purveyor's method of glazing the baked treats as they pass through on a conveyor belt. And yes, there is (usually) a glass window to press your face upon.

But this is not a story about the new location or even the stadium-style seating in the so-called "world’s largest Krispy Kreme doughnut box."

This is a story about the other New York City Krispy Kreme: Currently the only one in the city, located in the heart of Penn Station.

As I started my foraging run for Krispy Kreme doughnuts at the corner of 8th Avenue and West 31st Street, I was greeted not with the comforting aroma of an original glazed or fresh coffee, but with the pungent smell of Midtown Manhattan.

Harried business travelers and disoriented tourists raced to catch departing trains, while I wandered through the Amtrak concourse in search of doughy rounds.

In my search, I passed by three separate stands from the competitor, Dunkin' Donuts, and got lost twice. But I was determined.

In true TPG fashion, I checked beforehand to see if Krispy Kreme offered a loyalty program for customers -- and it does! Loyalty members will receive one credit each time you purchase a "Rewards Track" item, such as an original glazed doughnut. After 12 purchases, you get a free doughnut.

The current promotion offered a free doughnut just for signing up for the program and I wanted to make sure to take advantage of the offer.

Promotion in hand, I approached the counter and placed an order for two dozen doughnuts: one-half dozen of the signature original glazed, with the rest being an assortment to take back to the office.

I immediately noticed this storefront lacked many of the draws of a full-service location. The only noticeable smell came from the pizza by the slice joint next door -- not the distinctive smell of Krispy Kreme. There was no conveyor belt; no smiling customers leaning over the glass to admire the fresh doughnuts; and I wasn't offered an iconic white paper hat.

The store's speakers were playing Ne-Yo's 2006 hit "Sexy Love." In the background, the 10:52am Pennsylvanian Amtrak train was beginning to board. Notably, I didn’t observe a Hot Light -- which is a major selling point for these doughnuts.

During checkout, I remembered to inquire about my free doughnut and the cashier happily scanned my phone. I decided to stick to the classic original. The doughnut was a perfect mix of Krispy Kreme's signature fluffiness with just the right amount of glaze without being too sweet.

With my goods in hand, I had to navigate my way out of Penn Station and through the throngs of Acela travelers, school groups and employees. That made even a venture to Times Square next year sound like a more relaxing alternative. But either way, I suppose, you still get Krispy Kreme.