Articles
Brian Biros spent most of the last 15 years backpacking through 100+ countries. He writes TPG's Points & Miles Backpacker column, so you'll more likely find him in a hostel than a Ritz, if you can find him.
Follow
Dec. 17, 2018
•
11 min read 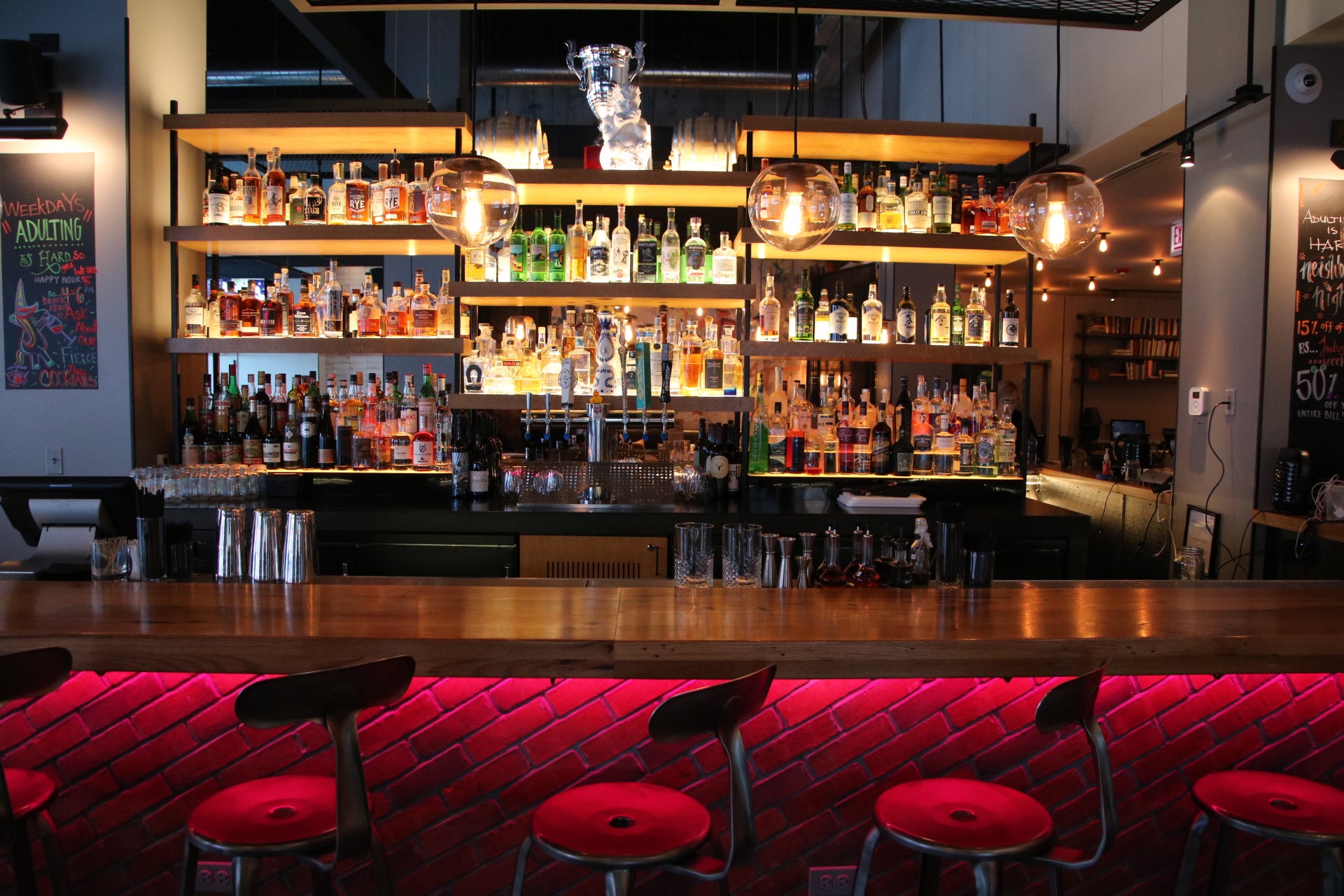 I didn't think I was a millennial. I thought I was old enough to scoff, with the boomers and the Gen X-ers, at those entitled youngsters glued to their smartphones. Then, earlier this year, the Pew Research Center made its declaration: "Anyone born between 1981 and 1996 will be considered a millennial." And, well, 1981, that's me. Damn. I'm a millennial.

That's when I realized I am part of the coveted millennial market. Those hotel chains targeting millennials are targeting me. Brands such as Radisson RED, Hyatt Centric, Canopy by Hilton, GLo by Best Western and Marriott's Aloft and Moxy spin-offs have modernized and digitized rooms presumably with millennial needs in mind.

However, modernizing can often be a euphemism for downsizing and trimming. I decided I needed to evaluate the experience a millennial-friendly property from the perspective of an avocado- and hashtag-loving millennial. Moxy stood out as the more intriguing of these brands. While all these hotels advertise a fresh and efficient experience, no other brand tries quite as hard to be cool.

While many people are quick to label the target demographic as millennials, Moxy and other hotel brands are careful not to use that verbiage. Instead, Mark Namdar, the so-called captain (or general manager) of the Moxy Washington, DC, identified Moxy's demographic as "the young and young at heart," telling TPG that "Moxy is not just for millennials" and "not specific to an age demographic."

Moxy even has a term for its guests: "fun-hunters." While that's probably not the first term I'd use to identify myself, I decided I'd play along. And on my last trip to the Windy City, I booked a room at the Moxy Chicago Downtown.

Moxy may claim to be interested in any guest with a youthful spirit, but their marketing is fiercely focused on, well, the actually young. Their website features a collage of young women engaged in playful flirtation with men who seem down for anything except wearing a shirt. While everyone looks to be having fun, it's best not to spend too much time analyzing the pictures. I can't imagine sitting on a foosball table is as delightful as the girl photographed makes it seem.

On the booking page for my stay at the Moxy Chicago Downtown, it was obvious they encouraged guests to join the debauchery. They didn't leave any room for misinterpretation with the "Become a Mother" room package, which included two cocktails upon arrival, massage oil and a very specific welcome amenity. Oh, and it's called the "Become a Mother" package.

The "Queen of the Night" room package included a VIP drag show experience complete with a drag makeover, and the "Size Matters" package included a large cocktail, massive burrito and tickets to Willis Tower Skydeck. You get the idea.

As a single, male guest, the "Become a Mother" package didn't really seem like a fit. But upon arrival, Moxy did make it clear that this would be a great place to meet women, thanks to the "Bumble Spot Recommended" signage.

Inside, I found the Moxy lobby, which the hotel has deemed the "Living Room" and felt like the manifestation of a corporate whiteboard session answering the question, "What do millennials like?"

The result was a mix between an IKEA showroom, a chic cocktail bar and a hipster coffee house peppered with adult party games, pop culture references and Instagram-worthy decor.

One of those whiteboards quite possibly included a Venn diagram of tacos, bacon and "The Walking Dead," at the intersection of which was the hotel restaurant, Zombie Taco. Here, guests can order tacos with Korean beef, spicy quinoa with cauliflower or thick-cut jalapeño bacon, among others. I personally had the latter for breakfast — twice — and it was as delicious as it was Instragrammable.

The games, scattered on tables across the Living Room, ranged from classics like Jenga and Connect Four to adults-only amusements such as That's What She Said. The furniture ranged from beanbags to designer chairs and couches with throw pillows saying, "Trust me, you can dance. — Vodka."

And just when I thought the drink menu was taking an inexplicably more traditional route, I saw "#BadLifeChoices," which is a dangerous mix of PBR and rye whiskey.

The party didn't stop in the Living Room. Moxy has flipped the hotel script in places I frankly didn't think were possible. (Or necessary.) The late morning knocks up and down the hallway that you'd expect to be followed by, "Housekeeping," were actually from the "Style Team." A call to the front desk, or "crew," was greeted with the almost painfully casual, "What's up?" You could also ring to request bedtime stories told by none other than The Blonde Abroad, a good friend of TPG himself.

Moxy didn't break character in the gym, either. Ambiance seemed to take priority over practicality, as evidenced by the pink stationary bike, pink boxing gloves and jar of Starburst. Yes, candy. While I was encouraged to "Be a bad ass with a good ass," I was also reminded to "Save some energy for tonight."

I have to hand it Moxy: This hotel was nothing if not consistent. Even the service entrance off the back alley couldn't escape the party.

While I'm poking plenty of fun at Moxy's over-the-top image, I actually did enjoy the overall hotel experience. And if there was any question about how Moxy felt about me in return, I got my answer when calling the Moxy NYC Downtown. The menu options wrap up with, "Love you. Mean it."

Despite what I interpreted as an aggressive appeal to millennials, the majority of guests I saw were almost certainly not millennials. It created a fascinating contrast at times. For example, I saw a group of older women seated together in the Living Room, and a group of middle-aged men in town for a football game who seemed thoroughly entertained by what looked to be their first time playing What Do You Meme? Moxy was right that "fun-hunters" can come from any demographic.

But though there are bunk beds, I strongly advise parents considering a stay at a Moxy property to look elsewhere. Although the hotel won't stop you from adding children to a reservation, some hypothetical scenarios should. You could very well be checking into your room and be interrupted by your little one who, having wandered into the Living Room and discovered a naughty card game, has an arsenal of questions about new words.

I honestly wouldn't have expected Marriott to push the envelope with an unapologetic party vibe and sexual innuendo. But that is precisely what Marriott's Moxy does. Sure, some older guests may be confused by the pound signs written before everything; and the NSFW topiary of the rooftop Magic Hour lounge at the Moxy NYC Times Square may offend more conservative types, but there are plenty of traditional hotel options out there for particular travelers.

And while plenty of millennials will roll their eyes at Moxy the same way they would at an aunt who always wants to talk about the Kardashians, it's just as easy to embrace it and be entertained. Moxy goes all-in, and I applaud the total, unequivocal effort.

Regardless of your demographic, you need to manage expectations if you plan to stay at a Moxy, or any other millennial-minded hotel. Aside from the experience, there may be amenities you've always had that these hotels decided you no longer need. You'll have to look specifically to see if these typically standard features are included with your hotel stay before booking.

Work Desk: Possibly the most unpopular development in some microhotel room designs is the removal of desks. Moxy counters this with the large selection of seating in their Living Room, which has the vibe and setup of a standard millennial-filled coworking space or coffee shop (except, perhaps, the coffee selection). However, it's often nice to work in the privacy of your own room. The desk wouldn't have to be big, and Moxy could even write, "Work hard, play harder!" across the top. Instead, they supply a folding table and chair, but it's not very practical.

Two Beds: The standard choice of one king or two queen beds is replaced by one queen or two twins. This often puts the maximum occupancy of a room at two, and rollaways are rarely an option.

Square Footage: While a standard hotel room is usually over 300 square feet, microhotel rooms like those at the Moxy Chicago Downtown are often under 200 square feet.

Closet and Dresser: Many minimalist hotels don't supply closets or dressers, including mine at the Moxy Chicago Downtown. Instead, I had only pegs and a few hangers on the wall, and the room didn't have any drawers to store clothes.

Bathtub: Another space saver, tubs are swapped for showers that take up about half the space. With your safety in mind, Moxy NYC Downtown reminds you on the shower walls that it's "Slippery When Wet."

Iron and Ironing Board: Moxy rooms include a steamer, but irons are limited to one per floor in a common ironing area. If you're shy about ironing half naked in front of others, Moxy Chicago Downtown has a helpful wall-sized guide to not screwing up your laundry.

These changes, which are presented as enhancements to the guest experience, are more simply big space and money savers for the hotel. But these savings are typically, at least partially, passed on to the guest. So if none of the above alterations bother you, these microhotels could be, if nothing else, a more economical hotel option. And if you really embrace the vibe, you may even find yourself entertained.

All images by the author unless otherwise noted.