Articles
Mike Arnot is the founder of Boarding Pass NYC, a New York-based travel brand and a marketing consultant to airlines. A private pilot, he can sometimes be found above the skies of New York City.
Follow
Dec. 27, 2019
•
5 min read 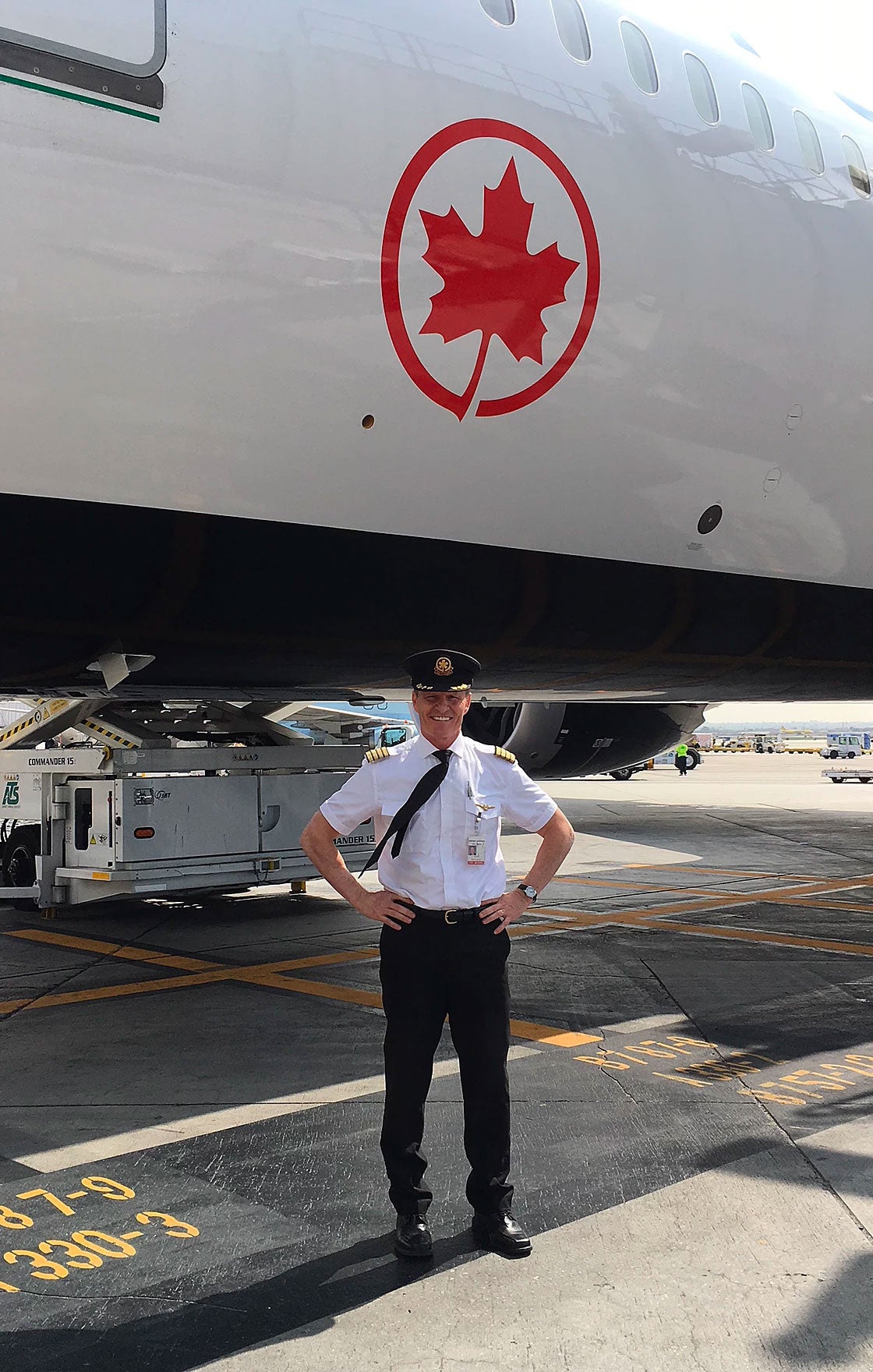 Meet Doug Morris, the most famous Air Canada captain
This post contains references to products from one or more of our advertisers. We may receive compensation when you click on links to those products. Terms apply to the offers listed on this page. For an explanation of our Advertising Policy, visit this page.

"I was flying from Toronto to Tokyo, and you'll never believe who the captain was," my sister texted me, knowing that her older brother would love the story.

It wasn't just any Boeing 787 captain. It was Air Canada's Doug Morris, one of just a handful of pilot auteurs who educate the public about flying — people like Mark Vanhoenacker, TPG contributor Patrick Smith and William Langewiesche. He is the author of three books including From the Flight Deck: Plane Talk and Sky Science and Pilot Weather: From Solo to the Airlines, and since 1997 he has written monthly short columns for enRoute, the airline's in-flight magazine.

There, he answers all manner of airplane-related questions, from the causes of turbulence up in the air to parts of the wing.

I recently caught up with Captain Morris by phone when he was off duty.

The longtime pilot for Air Canada has 25,000 flying hours — the equivalent of driving between New York and Boston and back every day for six years, he said. Morris began his career as a private pilot in the 1980s, but with the oil crisis, the economy wasn't great for pilots. (It's decidedly better these days). He obtained a degree in Physics at Halifax's Dalhousie University and then a diploma in meteorology at McGill University. Morris then worked for Environment Canada for four years as a meteorologist.

You won't find many pilots with such a solid understanding of weather.

After a few years of flying on the Eastern seaboard in small aircraft, Morris joined a regional airline, Air Nova (now part of Air Canada Jazz) and then Air Canada, where he flew the Airbus A340, A320 and now, the Boeing 787.

Does he ever get recognized?

"Occasionally," he said, noting that he has a following among flight attendants, who have told him how thankful they are for his educational columns for the flying public, "particularly articles about turbulence."

Morris lives in Toronto, and plays hockey to keep fit. Typically Canadian, you'd think — but his life is, in fact, far from average.

For example, he can go to Europe six times a month, like he's done this fall — to Madrid, London Heathrow and Zurich, for a total of 12 Atlantic crossings. That same month, he also did flights between Toronto and Los Angeles and Vancouver. The 250- to 300-seat 787-8 and 787-9 Dreamliners cover destinations all over Air Canada's network — in Asia, North and South America, Europe and Africa — which keeps Morris busy.

So what are his favorite airports to fly into?

"Vancouver has the prettiest, most scenic approach," he said, referring to the airport nestled between sea, sky and mountains. Surprisingly, he also said Las Vegas, for its landing: "McCarran Airport is so close to the strip, landing there is a light show, like an amusement park."

Morris has been to Japan some 30 or 40 times in his career, he said. That's a lot of sushi. So, where does this world traveler prefer to visit?

San Francisco offers the most activities for the off-duty pilot, especially the great outdoors, according to Morris. London is also a preferred destination, for the museums and the pubs. (His preferred beer is a Stella Artois at a London pub.)

"Every pilot could write a world travel guide. We're good at finding the cheapest beer and good meal," he said.

Morris' overseas trips are generally 24 hours long. An overnight flight to London, for example, will arrive around 10 am local time, and he will be awake for the entire flight. (In Canada, on the Boeing 787 there are two pilots, but that is changing to three pilots.) Then he''ll transfer to the hotel and get some rest. He'll wake up again in the late afternoon London time to explore the city for a few hours, before returning to the hotel for sleep. The return flight from Europe will depart the next day around 12pm.

Courtesy of his airline travel benefits, Morris and his family have spent Christmases around the world, including in Tel Aviv and Hong Kong, or cruising in the Caribbean. His son, for example, has been to about 50 countries.

By his own count, he's written 244 articles for the airline's magazine. The next topic, for the January edition, will be "Is it too cold to fly?" — spoiler: the answer, Morris said, is no. There's no risk of running out of questions to answer: the enRoute editors, he said, have "a huge repertoire of ideas." The magazine is also now dedicating two pages to his work, starting in January 2020.

So, the next time you fly Air Canada, be sure to look for Captain Morris' column in the back of the magazine, and listen closely to hear if he's the one making the public address.

Our points-obsessed staff uses a plethora of credit cards on a daily basis. If anyone on our team wouldn’t recommend it to a friend or a family member, we wouldn’t recommend it on The Points Guy either. Our opinions are our own, and have not been reviewed, approved, or endorsed by our advertising partners.
See all best card offers
Related stories
News
Frontier unveils $399 unlimited summer flight pass, 8 new routes to Puerto Rico
News
Alaska Airlines adds 3 new routes just days after dropping 1
Guide
8 magical new reasons to visit Disneyland this year
News
Good news: All Qatar Airways business-class award space again showing on AA.com