8 of the Most Instagrammable Places in Detroit 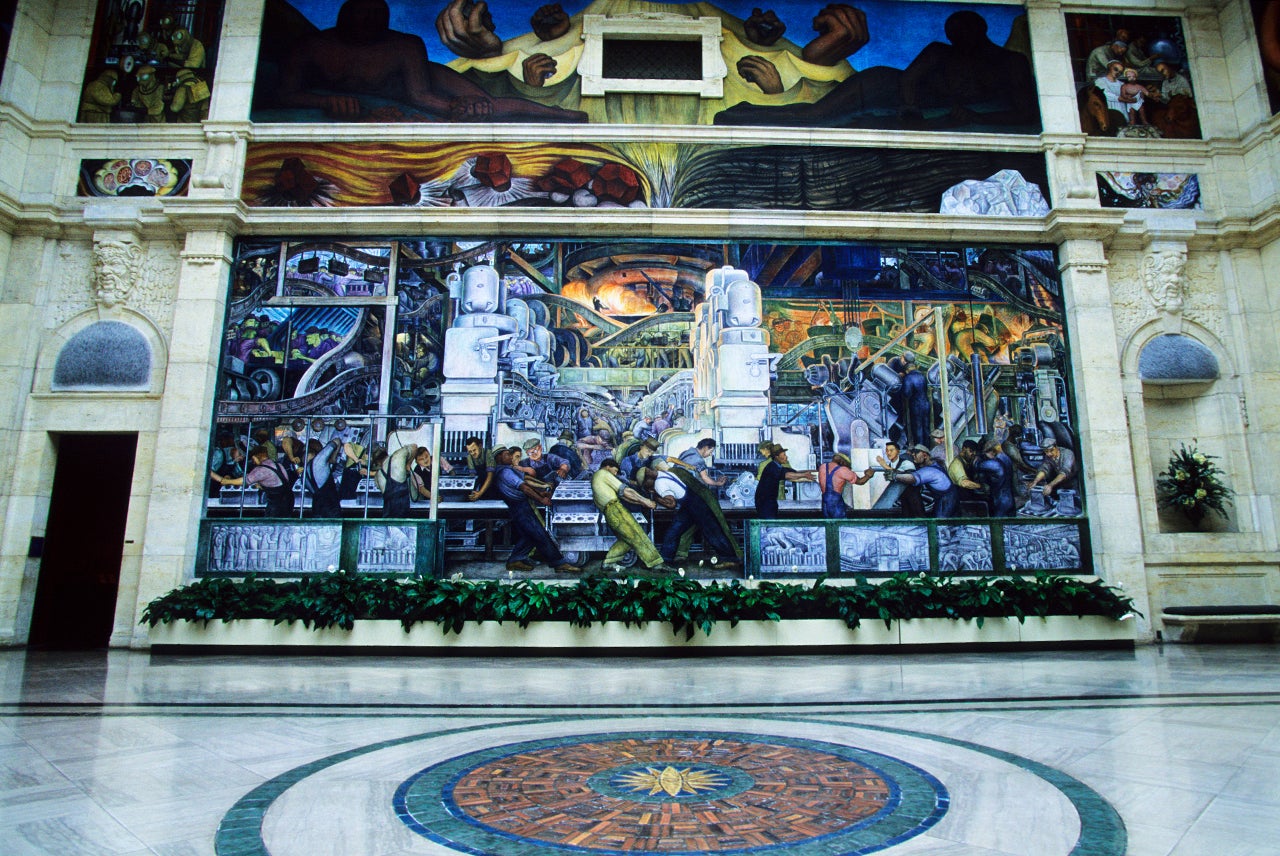 Detroit, Hockeytown, Motor City — Michigan’s former capital carries several apt nicknames. With a deeply rooted industrial history, innovative present and revitalized future, Detroit offers activities for every sort of traveler. Head to Comerica Park to catch a Tigers game or Detroit Brewing Co. for an artisan brew, or stroll along the RiverWalk and grab lunch at the GM Ren Cen. Detroit’s rich yesterday and promising tomorrow set the stage for an exciting, picturesque today. Here are a few of our favorite Detroit venues to snap some photos and show that you’re #downwithdetroit.

Opened in 1928 as a film venue under the umbrella of the Fox Theatre chain, Fox Theatre Detroit is now a favorite spot for concerts and shows. A truly photogenic treasure, the interior of the theatre was designed to look like a great tent supported by spears, all holding a 2,000-pound chandelier in the center. Sharp eyes can also detect a grand menagerie of bird and mammal figures along the sweeping archways and stoic columns. Remember that some shows do not allow photography while the show is in session, so make sure to arrive early and snap photos beforehand.

2. "Detroit Industry" Murals at the DIA

Designed and painted by the great Mexican visionary Diego Rivera, the 1933 "Detroit Industry" murals serve as a homage to Michigan’s working class. Paying such a tribute to the working class is not an uncommon theme in Rivera’s works, but these particular frescoes are specific to the industry boom at Ford Motor Companies. They consist of 27 panels that completely surround Rivera Court within the Detroit Institute of Arts, allowing for complete immersion into the artwork. Controversial even before they were finished, the frescoes spurred a wave of anti-Marxist protests and politically charged editorials. However, today they stand as a respectful tribute to industrial Detroit in the twenties. Visit them and see for yourself, and make sure to look closely to unveil some of the most minute details of this Rivera fresco.

3. The Spirit of Detroit Statue

"The Spirit of Detroit" is a 16-foot bronze statue commissioned in 1955 by Marshall Fredericks and dedicated to the city in 1958. It depicts a man holding a symbol of God in his right hand and a symbol of human relationships in his left, meaning that a heavenly being can be expressed through family. Today, though, the statue embodies a more modern vibe of Detroit’s favorite symbols; it is often seen wearing the jerseys of Detroit teams during playoff weeks. Take a trip down Woodward Ave. to the Coleman A. Young Center and see what the statue is wearing during your trip to Detroit.

Escape Detroit’s bustling metropolis and hop over the MacArthur Bridge to Belle Isle Park. With 982 acres of natural area, this Michigan State Park boasts a zoo, golf driving range, aquarium, wooded areas, hiking paths and picnic greens to enjoy on sunny days. You can even rent bicycles and paddle boats. But, you must hold a Recreation Passport to enter the park. The Recreation Passport is available to state residents for an annual fee of $11 online or $16 on-site. Take your time and snap some photos of the picturesque James Scott Memorial Fountain, vibrant Michigan foliage and stunning panoramic views of Detroit and Windsor.

Potentially considered a junkyard to an unartistic eye, this ongoing project is deeply rooted in the heart of Detroit’s urban art scene. It was founded in 1986 by artist Tyree Guyton, who upon returning to his decaying home neighborhood of Heidelberg Street, decided to combat the impending entropy with creation rather than destruction. The effect of this has been educational and healing; the act of creating with found objects encourages the idea that things can be reused and revitalized simply by a change of use or perspective. Tours of the Heidelberg Project are available, some of which include a Q/A with Tyree Guyton himself, who is currently dismantling some of the smaller installations. Don’t worry though — he’s doing this to make room for Heidelberg 3.0, a brand-new project.

Nicknamed the Cathedral of Finance, the Guardian Building is the 8th tallest building in Detroit. Architect Wirt C. Rowland had a rich history designing Detroit buildings before he was commissioned to design the Guardian Building, but this creation still remains one of the most impressive Art Deco skyscrapers on Earth. The striking interior contains colorful inspiration from First Nations and Aztec cultures, leaning on an artistic vibe that isn’t necessarily expected of a financial center. The reasoning behind the choice of exotic materials and patterns has to do with the crash of 1929, which occurred just after the building was finished. Leisure was less common than strife at the time; the impression that the architect wanted to leave was one that would encourage and uplift. Explore this symbol of Michigan-based ingenuity and perseverance, and don’t forget to snap photos of the decorative patterns and giant map of Michigan.

As the Heidelberg Project suggests, Detroit is home to a number of professional urban artists. Curated by the company 1xRUN, more than 100 murals have been curated and completed just in the Eastern Market District alone. As a result, the area has seen an increase in security, commerce and beauty that was improbable before. Go on a scavenger hunt to find the great red shark, sparkling constellations, sharp angles and colors, symbols of power and resistance, and works by dozens of artists which rotate on a yearly basis. Check out the official website to download the current mural map before you go exploring, and don’t forget your camera.

The Detroit Masonic Temple is the largest masonic temple in the world, and it houses three theatres, three ballrooms, a swimming pool, a bowling alley, a pool hall, offices and more. In 1922, the cornerstone of this building was lodged into place using the same trowel that George Washington used to place the cornerstone in the US Capitol Building. Today, having survived foreclosure largely thanks to a donation by Detroit-native Jack White of The White Stripes, the building hosts events, concerts, weddings and the Detroit roller derby team. Take a tour on the first or third Sunday of the month and snap photos of the neo-Gothic facade, but don’t forget to check out the interior rooms, which were inspired by cultures all over the world.