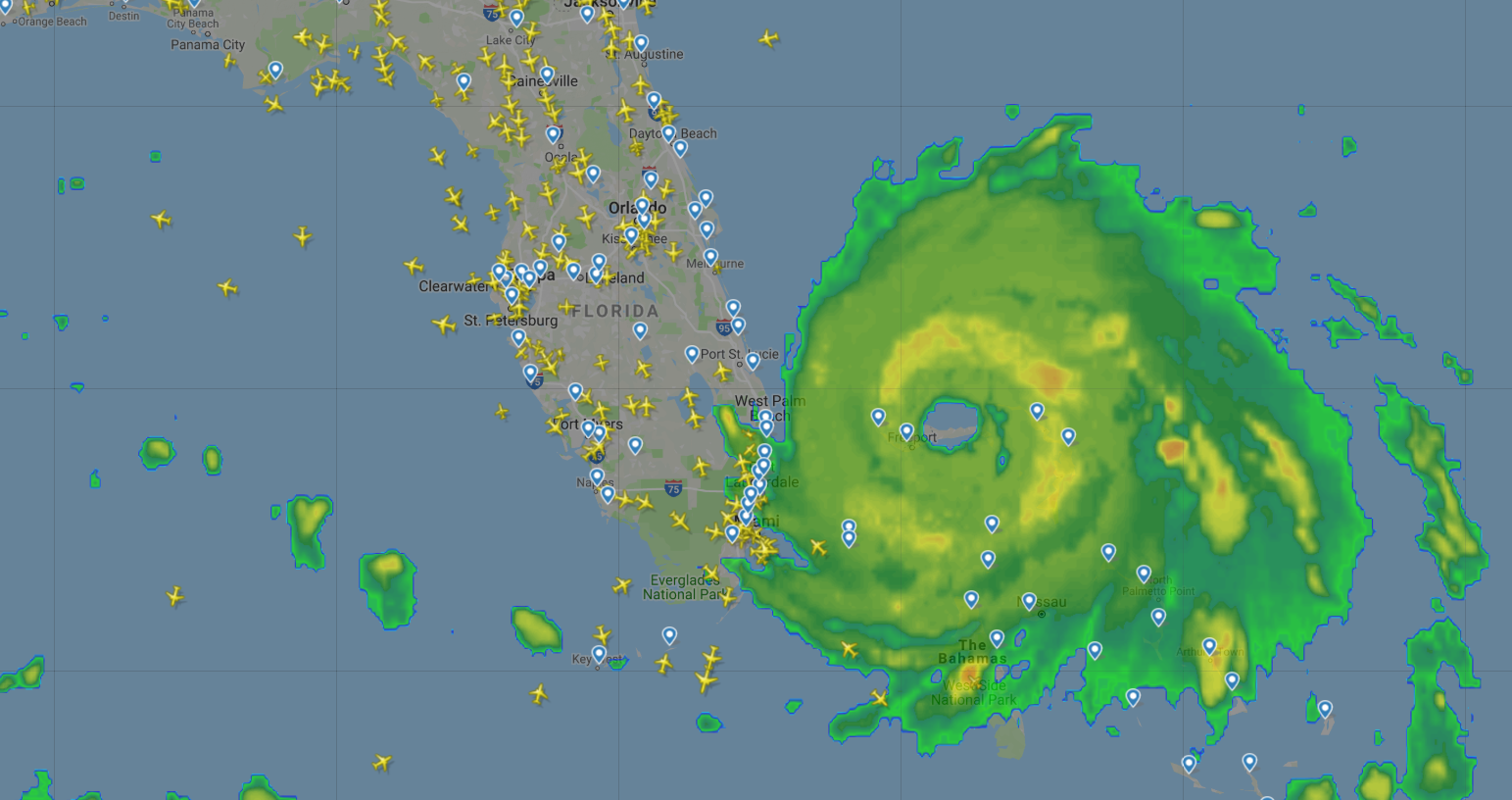 Hurricane Warnings, Evacuation Orders Extended as Dorian's Winds Reach Florida Coast
This post contains references to products from one or more of our advertisers. We may receive compensation when you click on links to those products. Terms apply to the offers listed on this page. For an explanation of our Advertising Policy, visit this page.

As tropical storm winds reach the Florida coast, hurricane and storm surge warnings have been extended up the Florida coast. Mandatory evacuations are in place from South Florida to coastal South Carolina. Meanwhile, Hurricane Dorian has all but stalled over Great Bahama island with 150 mph sustained wind speeds.

Hurricane Dorian is currently not forecast to make landfall on the Florida coast. However, the National Hurricane Center still gives a 99% probability of tropical storm-force winds reaching Fort Pierce and Cocoa Beach, Florida. The storm's proximity has already led to the closure of the first Florida airport and four more have announced that they'll cease operations later Monday.

Although Florida may avoid catastrophic effects from the storm, millions of Floridians are still forecast to lose power, and significant flooding could still occur. Most airlines still have airfare caps in place and are waiving baggage and pet fees, and many are still giving travelers the option to delay their trip or cancel outright without fees.

Weather waivers have been extended beyond Florida into Georgia, South Carolina and North Carolina. Waivers now stretch across 24 Southeast airports and four airports in the Bahamas:

As of the 2 p.m. Monday National Hurricane Center update, Hurricane Dorian has weakened slightly but is a one of the strongest hurricanes on record — a Category 4 with maximum sustained winds of 150 mph. For reference, that wind speed is equivalent to an EF-3 tornado. The center of the official track as of 2 p.m. keeps the catastrophic hurricane from making landfall on the east coast of the US.

However, the storm strengthened faster and tracked further south than models have predicted. While most models are in agreement that the center of the storm will stay off of the coast, the proximity to the Florida coast can cause significant flooding and strong winds.

Most of the east coast of Florida is still in the cone of uncertainty through the end of day Wednesday. The coasts of Georgia, South Carolina and North Carolina are very much at risk Wednesday through Friday.

Even if the storm stays off of the coast, Florida is expected to get significant rain, storm surge and wind damage. The NHC computes a 99% probability of tropical storm-force winds in Fort Pierce and Cocoa Beach, Florida, and 98% probability of tropical storm winds in West Palm Beach. A Storm Surge Warning is in effect for parts of Florida, where 4-7 feet of storm surge is predicted within 36 hours.

Evacuation orders are in place up the coast of Florida -- including St. Augustine, Jacksonville, Georgia (east of I-95) and the coastal areas of South Carolina:

Between 4-8 inches of rain is expected in Florida with isolated parts getting 10 inches. However, rainfall could reach up to 15 inches along the Carolina coast later this week.

Those effects are likely to leave millions of Floridians in the dark. The Guikema Research Center estimated that 4.6 million Floridians will be left without power if the storm follows the National Hurricane Center forecast as of 8 a.m. Monday.

Fort Lauderdale (FLL) announced on Sunday night that it would suspend operations at noon Monday and reiterated that on Monday morning:

On Saturday evening, Orlando International Airport (MCO) announced it would continue operations on Monday. It has not announced a new closure time:

Further up the coast, Jacksonville International Airport (JAX) says that it will remain open until airlines cancel their flights:

Despite many Florida airports deciding to remaining open into Monday, flight cancellations have begun piling up. As of 11:00 a.m. Monday, FlightAware's cancellation tracker shows the following cancellations:

Through noon Sunday, Delta claimed to not have canceled any flights — even to airports that plan to suspend operations, saying it's "expecting normal operations, with no cancels as a result of the storm." Delta relented on Sunday night and cancelled 25 flights due to the closure of West Palm Beach Airport (PBI).

As of 4:30 p.m. Sunday, American Airlines reports cancelling 98 flights -- including flights between the US and the Bahamas.

Many airlines have continued to cap fares for flights out of Florida. Through September 4, American Airlines has capped fares at $499 one-way nonstop in economy or $699 in domestic first class for flights out of Florida. In addition, American Airlines is capping fares from eight Georgia, North Carolina and South Carolina locations through Sept. 6.

American Airlines and Delta are both waiving checked bag and pet fees for flights out of airports covered by travel waivers.

Delta's waiver "includes piece fees, overweight and oversize fees." However, Delta warns that "there will be limitations to the amount of baggage that the aircraft can carry, and some or all of your luggage may not be able to be accommodated on your flight."

American Airlines is waiving fees "for two checked bags and in-cabin pets for flights to/from all cities covered under the travel alert in Florida." To avoid needing to turn passenger bags away, AA is only accepting "up to two free checked bags per traveler." On Sunday afternoon, AA extended this waiver to eight Georgia, North Carolina and South Carolina airports.

Most US airlines have issued weather advisories for the Bahamas, Florida and into Georgia and the Carolinas, allowing flexible travelers the chance to rebook away from the storm. Current waivers cover 24 airports on the US Southeast Coast and four airports in the Bahamas. Here are the latest waivers:

Related stories
Round-trip flights to London from US as low as $346
What are points and miles worth? TPG’s October 2022 monthly valuations
Alaska Mileage Plan top-tier members get intriguing choice of perks for 2023
The newest airline collectible is out: KLM’s 103rd Delftware miniature house