How Racehorses Are Flying to the Kentucky Derby

Articles
Wallace Cotton oversees TPG’s online communities, manages the brand’s Instagram and contributes to the website. As a lifelong aviation geek he's always glued to the window whenever he flies.
Follow
May 03, 2019
•
5 min read 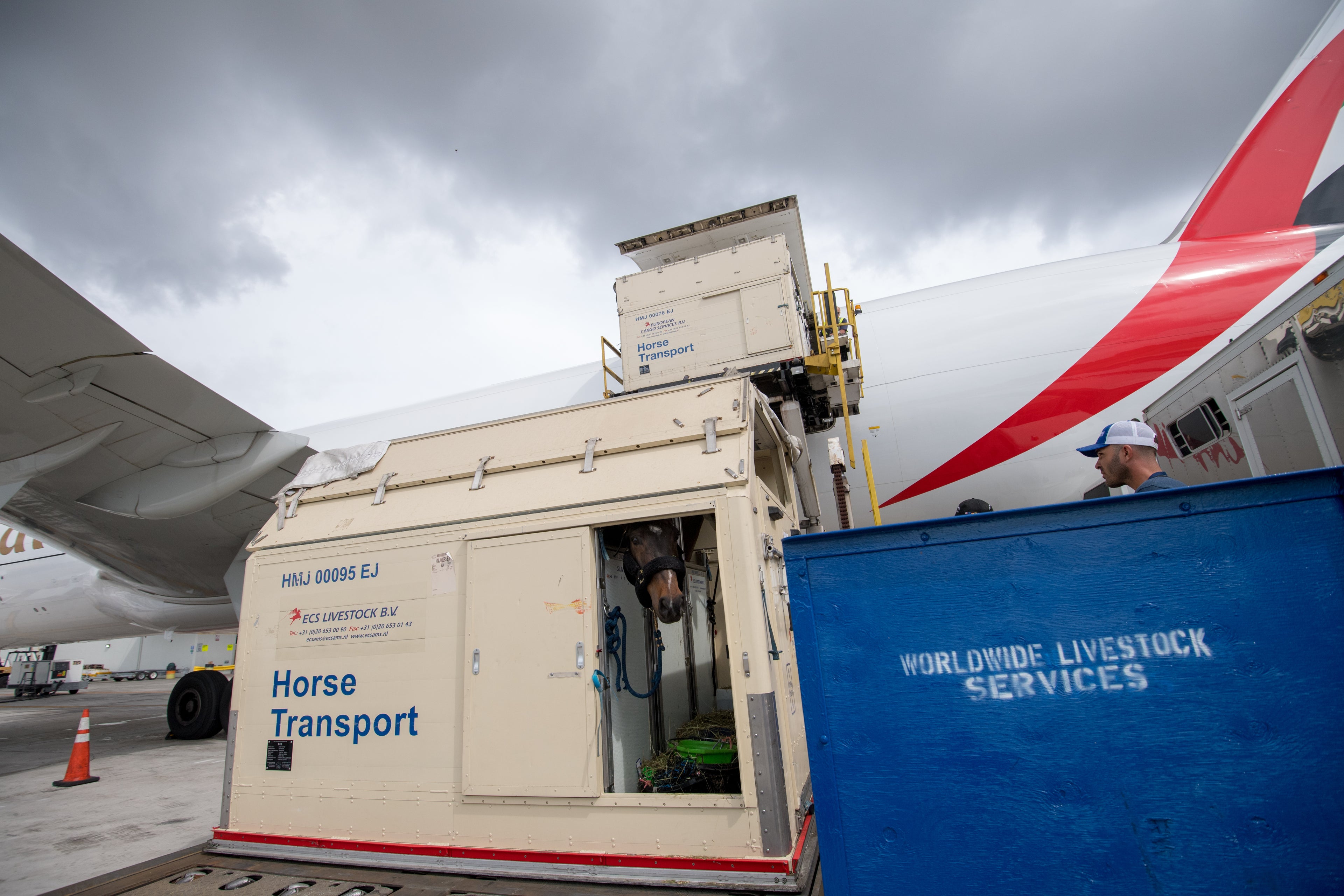 How Racehorses Are Flying to the Kentucky Derby
This post contains references to products from one or more of our advertisers. We may receive compensation when you click on links to those products. Terms apply to the offers listed on this page. For an explanation of our Advertising Policy, visit this page.

The Kentucky Derby, famous for its high-brow Southern attendees donning seersucker jackets, is one of the most prestigious horse races on Earth. High net-worth racehorse owners who have spent millions training their esteemed horses for this historic race travel hundreds if not thousands of miles by plane, and they fly in style. The owners, sure, but we're talking about the horses. Indeed, equine transport is no joke when it comes to hauling around the best — and most expensive — in the business.

For the Kentucky Derby horses come from far and wide, and many require ground and air transport to reach the race. While specific transportation varies by owner, high-value horses (racing, jumping, you name it) typically fly with similar amenities from event to event. So how, then, do million-dollar racehorses fly, you ask? In the horse equivalent of private suites, of course.

Moving livestock isn't particularly unusual for several of the world's most prominent commercial haulers like Fedex, Emirates, Qatar, KLM, UPS, Atlas and Singapore. Emirates SkyCargo in particular, has a dedicated program for equine care including onboard grooms, temperature-controlled stalls and other premium amenities. Unsurprisingly, prices aren't cheap through any commercial carrier, and many of these carriers charge by the pound. International Racehorse Transport (IRT), a company specializing in equine travel, provides safe and comfortable transport from ranches to races. Horses are loaded into portable stalls and then up cargo pallet loaders and into the massive cargo bays on freighter aircraft, like the one pictured below on an Emirates Boeing 777F, the cargo version of the twinjet that plies many of the world's long-haul routes.

You can see how the portable stalls being loaded onto the 777 look like standard cargo containers, adapted to contain large animals.

Dedicated companies like IRT pride themselves on decades-long service hauling horses across the globe, particularly their handling of the animals from pickup to dropoff, whether for Standardbreds, Olympians, or, as they put it, "treasured pets."

Horses often need to be quarantined before travel depending on where they're traveling to/from. Once travel day arrives, they're are loaded in large freight containers, one, two or three across (first, business or economy — no joke), depending on how much you've paid for your horse's ticket. IRT even has an onboard vet in some instances. For the thoroughbreds flying in to Louisville, Kentucky, most are probably in a private, "first class" stalls, unless they are thought to be more relaxed in the company of others.

Their food, as you can see below, is loaded with the container.

But perhaps the best in the biz, especially for the Derby, is Kentucky-based H.E. Sutton Forwarding Company. H.E. Sutton, otherwise known as "Tex Sutton", specializes in horse transport like no other. This equine transport company founded in the 1950s moves horses around with a Boeing 727-200 flown by cargo airline Kalitta Air and configured specifically for horses. Not surprisingly, the plane's flight logs often show it in Kentucky, one of the world's horse centers.

"Air Horse One", as it's nicknamed (it literally says "First class equine air travel" on the side of the plane), is outfitted with room for up to 21 horses, fitting two or three wide. Ticket prices vary but have been quoted in the several thousands of dollars per passenger. The animals are carefully loaded into the aircraft with inflight amenities like food (hay) and drinks (water — we didn't ask about champagne) to ensure that they arrive healthy, well-rested and relaxed. So much, in fact, are they committed to the comfort of their well-hoofed passengers that the aircraft often climbs and descends slower, and even will detour hundreds of miles out of its way to keep the flight as smooth as possible. One rep had said that flight crews will even accept long delays for the same reason. Thankfully, most horses seem to be used to it (and presumably don't mind waiting a little longer for a smooth flight).

From there, horses are brought to the racetrack, with little time to spare. If they've traveled from overseas, they may be quarantined once more, and trainers could request that horses have extra time to adjust to the time zone (jet lag, anyone?). For those AvGeeks out there, keep an eye on Louisville International Airport (SDF), UPS's own mega-hub, for any surprise aircraft hauling some of these horses to the biggest event in the sport.

The Kentucky Derby will begin on Saturday, May 5, just around 6:30 pm ET.