How aircraft get refueled: A look behind the scenes

Articles
Mike Arnot is the founder of Boarding Pass NYC, a New York-based travel brand and a marketing consultant to airlines. A private pilot, he can sometimes be found above the skies of New York City.
Follow
Dec. 25, 2019
•
7 min read 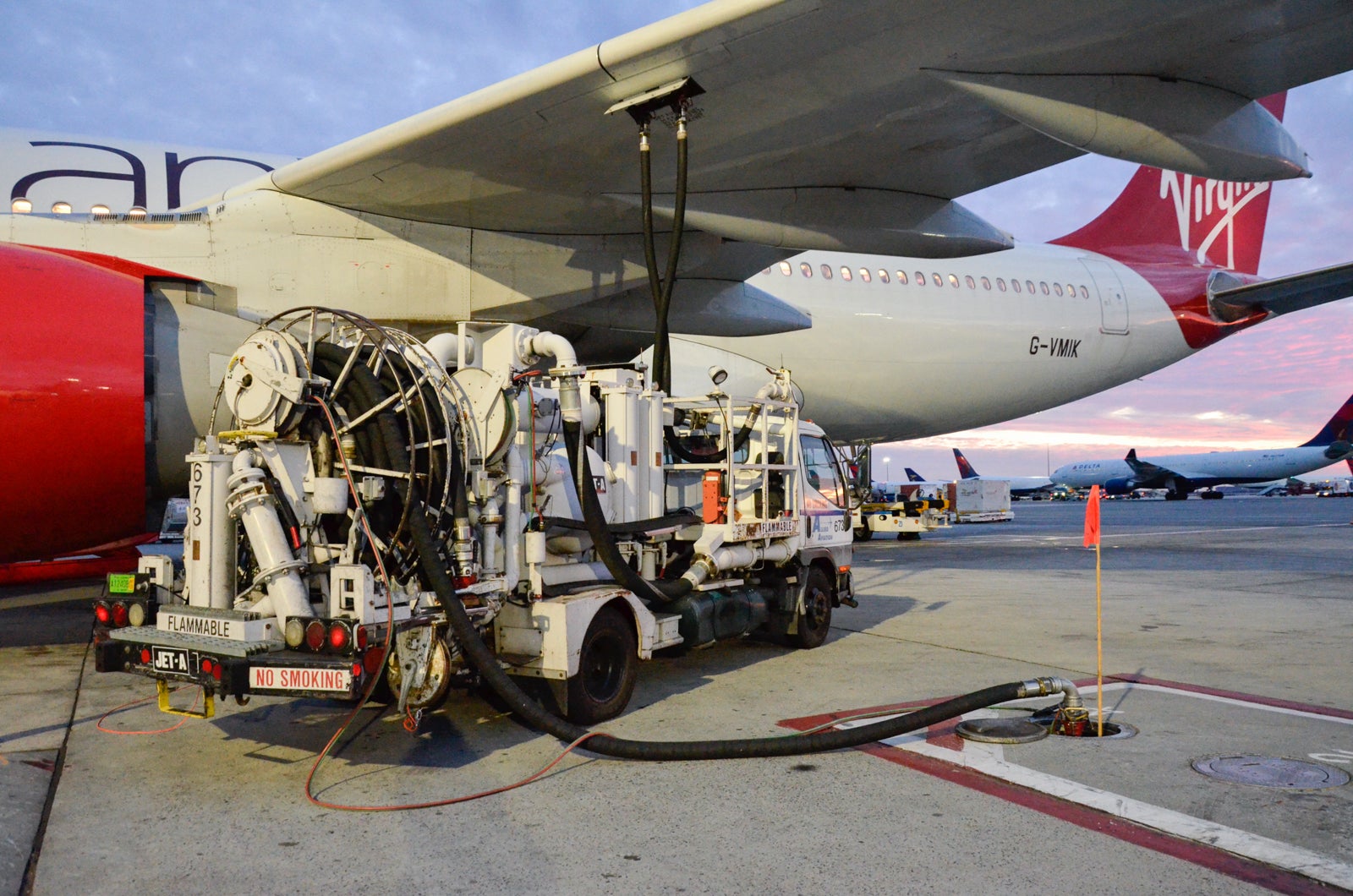 Have you ever wondered how a commercial aircraft gets refueled? I recently visited JFK and saw the refueling of a large commercial twinjet unfold, from the plane's arrival to when it left again for a transatlantic flight.

Jet fuel is essentially diesel. It's also known as kerosene, one of two types of diesel fuel. The fuel used in the U.S. and Canada is Jet-A, and the rest of the world, Jet A-1. (Learn more about jet fuel here.)

At major airports, this straw-colored fuel is stored in large tanks far from the airport operations, often a few miles. The fuel itself is pumped to the ramp from several miles away; airports have so-called "fuel farms," or large tanks where fuel is kept.

You can see the JFK fuel farm when you drive in or take the Air Train. JFK itself receives its fuel via a 40-mile pipeline running underground from a facility in Linden, New Jersey. The pipes are three feet underground. JFK has a fuel capacity of 32 million gallons, sending some 4.675 million gallons of fuel per day to awaiting aircraft.

From these tanks, the fuel is further pumped to the gate via pipes that run under the taxiways to the gate. The fuel is pumped to a hydrant, not unlike an underground fire hydrant. This one, however, is covered by a weight-bearing aluminum hatch.

A hydrant dispenser — essentially the cab of a truck with equipment on the chassis — connects to the underground hydrants near the airplane, and an orange flag is placed for maximum visibility.

You'll know it when you see it: it's covered in signs that say FLAMMABLE, NO SMOKING and JET-A — the size of the letters themselves is regulated. This device further filters the fuel for water and other contaminants prior to being pumped into the wings. And importantly, like a gas-station fuel pump, it has a meter where airlines can watch precious dollars pumped into the plane. It's cheaper than what goes in your car, though, at about $1.90 per gallon. Good thing, when almost 50,000 gallons of it can go into a Boeing 777.

The refueling truck was pointed towards the ramp, away from the terminal, and running. It is a regulation that the truck is to be positioned so that the operator can leave the fueling stand immediately in a forwards direction in the event of an emergency — no reversing.

Aircraft flying through the air generate static electricity, and fuel pumped into the plane at high velocity does the same. Accordingly, one of the first steps for refueling is to ground the truck. This is done with a cord attached to the airplane's landing gear.

The operator connects the truck's pump to the hydrant. They then raise a lift to connect the truck's hose to the underside of the aircraft, a process called bonding.

The operator holds a deadman's cord, which is an automatic stop, similar to squeezing the latch on the fuel handle when you fuel your car. The pressure from the hydrant itself is enough to push the fuel upward into the plane; the truck itself does not independently pump the fuel. You'll note that in the photo above, there are two hoses bonded to the aircraft; this increases the rate at which fuel is pumped into the aircraft. On large, transoceanic aircraft, there may be two carts fueling at once.

It takes about 45 minutes to one hour to fuel the aircraft, and the process begins no later than 90 minutes before the flight. (At 80 minutes, an airline's operations team will call the fuel team to check in; chop chop!)

The fuel is pumped at a very fast clip.

What about fuel trucks?

At the same time, from time to time fuel needs to be off-loaded from an aircraft — and it can only go into a tanker truck. This happens when a plane loads more passengers or cargo than planned and needs to be lighter, or where there is a smaller load than anticipated. In another example, sometimes aircraft are loaded with extra fuel if the airline dispatch team determines that the weather at the destination airport might call for an extra hold time in the air. But, if the weather changes for the better, the fuel might be offloaded to avoid flying around all that extra weight.

In the US, jet fuel is measured in pounds, whereas in the rest of the world, airlines measure it in kilograms. Airline operations teams in the US are very mindful of this. (You can read up on the Gimli Glider, which took only 4,000 pounds of fuel, rather than the 20,000 pounds it needed, directly because of a conversion error.)

The aircraft I witnessed being refueled was off for a trans-Atlantic flight. It arrived with 9,400 kilograms of fuel. The fueler estimated that it needed at least another 20,000 kilograms of fuel — it's an estimate because he had just started fueling. The operator will start the fueling process first, and not worry so much about the end number. There's plenty of time for that.

Underneath the wing (and also on the belly of the aircraft), there is an LED panel showing the fuel on board and the desired amount of fuel, which is pre-programmed by the ground operations team, based on recommendations from the flight dispatch team. That dispatch team reviews the expected performance of the aircraft based on winds aloft, temperature aloft, expected route, passenger and cargo load.

In this case, the Airbus A330 was refueled until it had 36,000 kilograms of fuel on board, and sent on her way back across the Atlantic.

Mike Arnot is the founder of Boarding Pass NYC, a New York-based travel brand and a marketing consultant to airlines, none of which appear in this article.