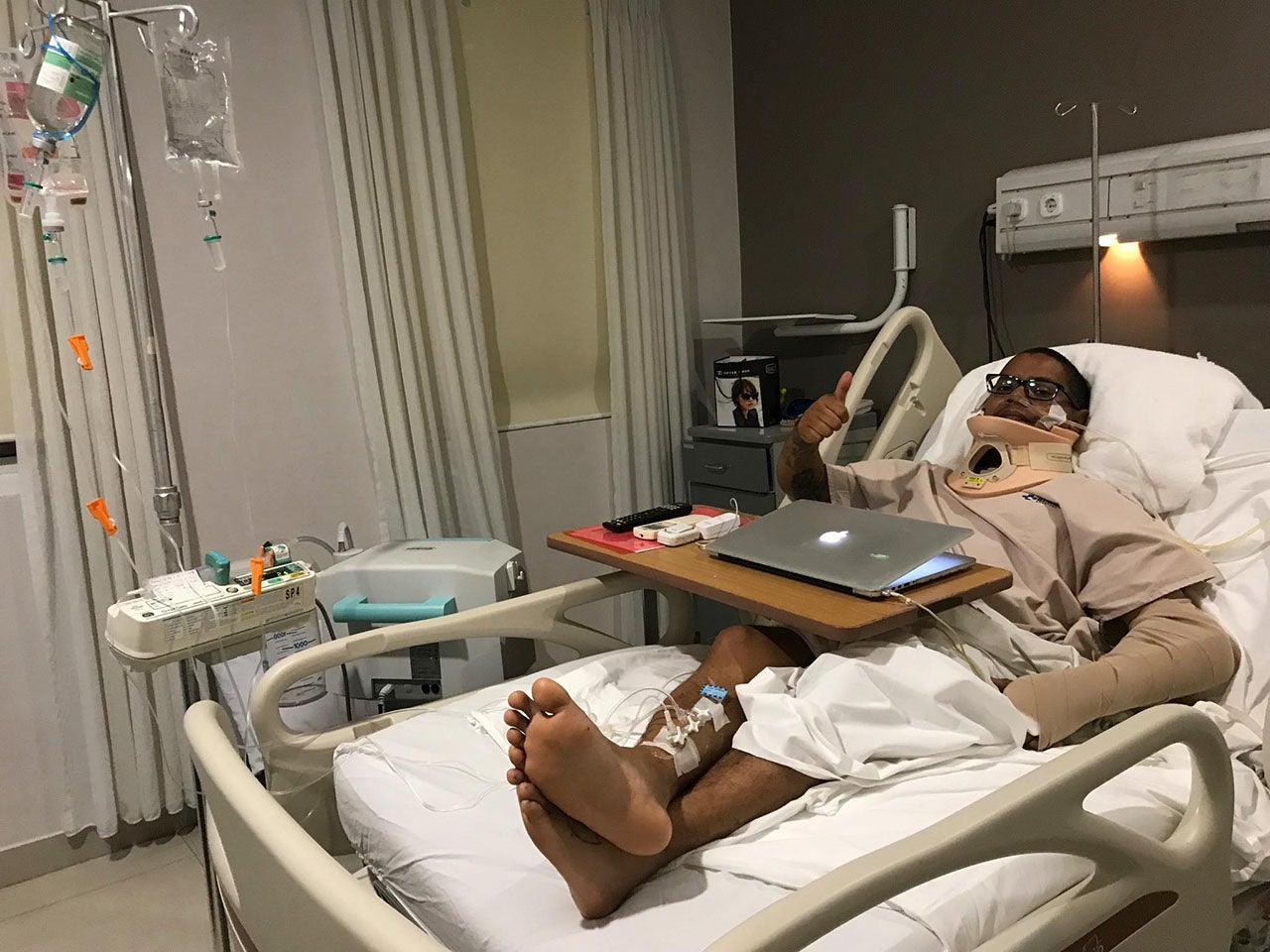 Lythcott, a 36-year-old American traveling with a friend, Stacey Eno, had just arrived in Bali, Indonesia, earlier that day. The two were riding a scooter back to their hotel when the bike wiped out on a curve. “We hit the brakes like normal, but we didn’t stop for some reason,” Lythcott said.

Hours later, Lythcott regained consciousness on his back. “I don’t remember hitting the ground,” Lythcott told TPG in an email, “just coming to in the dark, on my back.” Eno was nearby and responsive, but both were badly injured — and trapped on a steep ravine.

“[I] managed to find a strong vine in the dark and got myself in a stable position. I then realized full well my injuries,” Lythcott said. Neither Eno nor Lythcott could move. “That’s when I first thought we would die there.”

Lythcott couldn’t sit up, but he was able to check his jacket pocket for his American phone, an iPhone 7 Plus. His other phone, with a local SIM card, had been lost in the accident. After turning on data roaming, Lythcott was able to acquire a signal — and with only 42% battery, he immediately reached out to his international network.

“I needed a way to [reach] as many people as possible. I have 2,600 Facebook friends from years of living in the US, Canada, Spain, Portugal [and the] UK … I needed [the] maximum [number of] eyes looking for me.”

Because Eno and Lythcott had veered off a remote jungle road, Lythcott was also counting on Facebook’s GPS pin capabilities and audio call feature. That’s when he posted his single, frantic SOS cry on his Facebook page.

“I didn’t know at the time, but lots of people were mobilizing instantly.” Calls on WhatsApp and Facebook were reaching him within minutes.

Lythcott dropped a pin on his location, which friends and family members used to determine the injured travelers' location. They also called the consulate, the local Bali police and contacts on the ground, according to CNN.

Members of the US consulate in Indonesia reached Lythcott on his phone just before the battery died and, using the GPS information from the pin, coordinated a rescue.

Within four hours, rescuers had reached Eno and Lythcott with a flatbed truck and transported them to a nearby hospital.

There, they discovered the extent of their injuries. Eno had suffered a broken wrist and facial injuries (fractured cheekbones and a broken nose). Lythcott, meanwhile, had a fractured vertebrae, a perforated bowel, fractured ribs, a fractured skull and collapsed lungs.

"I spent 10 days in the hospital," Lythcott said. "I learned the SOS had over 500 comments and was [the] reason we were found. I'm still amazed people from all over made it work. I'm grateful beyond measure."

At this time, Lythcott is still in Bali. He told TPG he'd be returning to Atlanta to recover with family for two or three months. He was only just cleared to fly on Thursday. Eno is back in South Korea, where she teaches English.

Both Eno and Lythcott's families have started GoFundMe pages to cover expenses such as hospital bills and physical therapy. In the approximately two weeks since the nightmarish accident, more than $47,430 has been raised by friends, family and well-wishers.

"Tech saved us," Lythcott said of the ordeal. "I was scared until we got a signal."

In the future, Lythcott will consider traveling with a pocket Wi-Fi hotspot, and he'll continue to carry a phone with a local SIM card — only next time, he'll keep it secured in an inside pocket. "That's the only way my iPhone 7 Plus didn't fly into the dark like my [other] iPhone 6 ... which had a new battery and local SIM."

Lythcott also plans to check in on Facebook more often so there is a "digital trail" of his adventures.

Other types of tech can also be helpful in life-threatening situations, too. The Apple Watch, for example, has an Emergency SOS feature that dials 911 or initiates a call with a local emergency service.

Our points-obsessed staff uses a plethora of credit cards on a daily basis. If anyone on our team wouldn’t recommend it to a friend or a family member, we wouldn’t recommend it on The Points Guy either. Our opinions are our own, and have not been reviewed, approved, or endorsed by our advertising partners.
See all best card offers
Related stories
Deals
Deal alert: Winter USVI flights for as low as $224 or 13,000 SkyMiles
News
Air Canada adds 2 new routes to United hubs, with more likely to come
News
Chase cardholders: Check your eligibility to earn up to 10 bonus points per dollar in select categories
Reviews
7 things to know before booking a stay at Breathless Cabo San Lucas Resort & Spa