What It's Like to Fly a Pakistani Low-Cost Airline 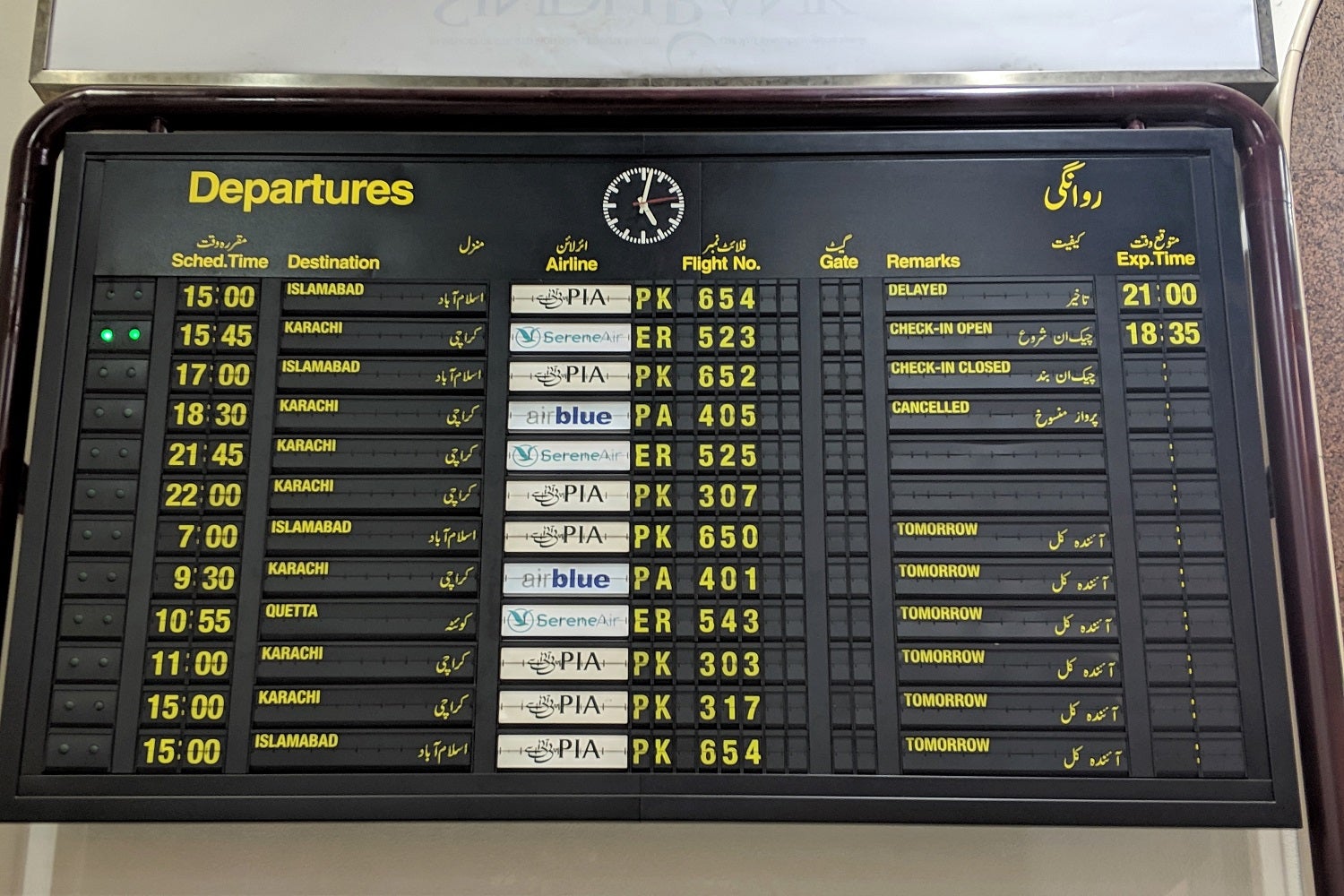 What It's Like to Fly a Pakistani Low-Cost Airline
This post contains references to products from one or more of our advertisers. We may receive compensation when you click on links to those products. Terms apply to the offers listed on this page. For an explanation of our Advertising Policy, visit this page.

Since I started keeping a flight log, I've flown 65 different airlines. I'm always excited to get to check out another one, so I certainly wasn't going to miss the opportunity to fly the newest airline flying around Pakistan: Serene Air.

For those wondering how I ended up flying an intra-Pakistan flight, let me explain. When I started college at Georgia Tech, one of my randomly-assigned freshman roommates was from Pakistan. We stayed close through college and have stayed in touch since graduating, so I was thrilled to accept his invitation to come to Pakistan for his wedding and related receptions.

After the wedding reception in Lahore, the wedding group headed to Karachi for the banquet known as Valima. Knowledgeable about intra-Pakistan flights, they chose to bypass Pakistan International Airlines and the other two commercial domestic airlines, and fly Serene Air from Lahore (LHE) to Karachi (KHI). So, we decided to do the same.

Booking the flight online as a foreigner is going to be a challenge. When we tried to book on the airline's website, we got the message that "credit cards issued only from Pakistan and GCC countries (Bahrain, UAE, Saudi Arabia, Oman, Kuwait & Qatar) are accepted." We tried anyway, but the payment wouldn't go through, seemingly rejected by the airline rather than the credit card company.

I messaged my Pakistani friend to see if he could purchase the tickets for us. He said that fraud prevention measures meant that he wouldn't be able to do so. So, upon arrival in Islamabad, we went straight from customs to the Serene Air ticket office. The English-speaking agent quickly booked our tickets at the same price we'd seen online a few days earlier.

The agent had no issues charging the tickets to my Chase Sapphire Reserve -- which I made sure to use for the solid trip delay, trip interruption/cancellation and baggage delay insurance. The total cost ended up being 21,150 Pakistani rupees (US$152) per person. Not expensive for me, but not for the average person in Pakistan, where per capita income is only ten times the price of that ticket. As expected, the purchase earned 3x Chase Ultimate Rewards points:

Note that the fare included 70 pounds of checked luggage and a very flexible change/cancellation policy: fees were just 1,000 rupees (US$7) for modifications more than 48 hours before the flight up to a mere 2,500 rupees (US$18) for a refund even after not showing up for the flight.

Katie noticed immediately after ticketing that the airline agent also misspelled my first name as "JHON." We pointed this out to the agent, who shrugged and said that it'd be fine. That turned out to be true.

Our journey to the airport turned out to be an adventure — the Uber routing led to my passport temporarily seized by armed guards after we mistakenly almost entered a military restricted zone. They eventually let us go with a warning. Then, friends on our flight texted us that it was delayed three hours. So, we re-routed to my friend's in-laws' house to hang out together as a group while we waited out the delay.

Katie and I took another Uber from the house to the airport, making sure to avoid restricted areas along the way. Before vehicles can reach the airport terminal, there was a police checkpoint, followed by large concrete barriers. Then, in order to enter even the domestic terminal, you'll need to show a same-day reservation and valid identification.

Immediately after entering the terminal, there's another security checkpoint. Here all bags are scanned, you'll pass through a metal detector and you'll have to go through a pat down -- whether or not you set off the metal detector. There's a separate line for men and women, with a privacy booth for women to step into for the pat down.

There's a Priority Pass lounge at Lahore Airport. As the Priority Pass app references the location of the CIP Lounge as "right after immigration control," we figured that the lounge was only in the international terminal. But we found one by following signs in the domestic terminal. Moot point: all lounges were closed when we arrived.

Still, there's a variety of shops selling very cheap -- by US airport standards -- food, drink, snacks, reading material and toys. An "airport regulated" price list was prominently displayed at each store. A half-liter bottle of water came to the equivalent of US$0.36.

Serene Air's fleet consists of just three new Boeing 737-800s. The aircraft for our flight was AP-BNA -- the airline's first aircraft. According to AirFleets, it was delivered new in November 2016 and is owned by a Chinese company, Silk Road Leasing.

It seems that this US-built aircraft may have been destined for a Chinese airline based on the Chinese lettering on the tray table placard, which wasn't fully masked by a new Urdu-language placard.

The all-economy aircraft is arranged with 32 rows on the right (starboard) side and 31 rows on the left (port) side, totaling 189 seats.

Most rows I measured had 30 inches of pitch. However, I noticed that the first few rows had 33 inches of legroom. A flight attendant explained that the first five rows were a "VIP" section. These seats were not sold at a premium when I tried to book online.

It seems Katie and I drew the unlucky straw. Our row had just 29 inches of pitch -- a tight squeeze.

This Boeing 737-800 had the "Boeing Sky Interior" -- meaning that there were extra-large overhead bins and mood lighting.

The leather-covered seats were fairly slim and looked a lot older than I thought they would have, given the two-year-old plane.

However, flight attendants did offer a selection of newspapers after the safety briefing. Our row never got a choice though, as flight attendants were called to their takeoff stations before they reached our row (25).

Shortly after takeoff, the flight attendants noted they'd be coming through shortly to "serve snacks." This wasn't just a choice between pretzels and peanuts. Instead, each of the economy passengers received a tray containing two small sandwiches, a muffin and a slaw-like salad.

The small meal was accompanied with a choice of drink. Standard Pepsi-branded options were available: Pepsi, Diet 7 Up and a selection of juices. However, there were some unique options too: Mountain Dew and Mirinda, a drink very similar to Fanta. Aquafina still and sparkling water were also available. After the meal, the flight attendants passed through with pots of very strong black tea and coffee.

During our time in Pakistan, we've rarely run into a language barrier. English is one of two official languages in the country, and this flight was no exception — crew members were fluent. While they didn't care for my photo taking during boarding, they didn't mind my hanging around to take notes and measurements after the flight. They seemed fascinated, even, and happily answered questions.

Overall, it was a pleasant experience, and reasonably priced considering checked baggage, seat selection and even plentiful on-board food were included. Except for the inability to buy tickets online, this flight on a Pakistani low-cost airline could be described as similar to my recent experience on US low-cost carrier Frontier — just with additional security measures in and around the airports, free checked bags, complimentary food and drink, a bit more legroom and no tipping.

60,000 points
Earn 60,000 bonus points after you spend $4,000 on purchases in the first 3 months from account opening. That's $900 toward travel when you redeem through Chase Ultimate Rewards®