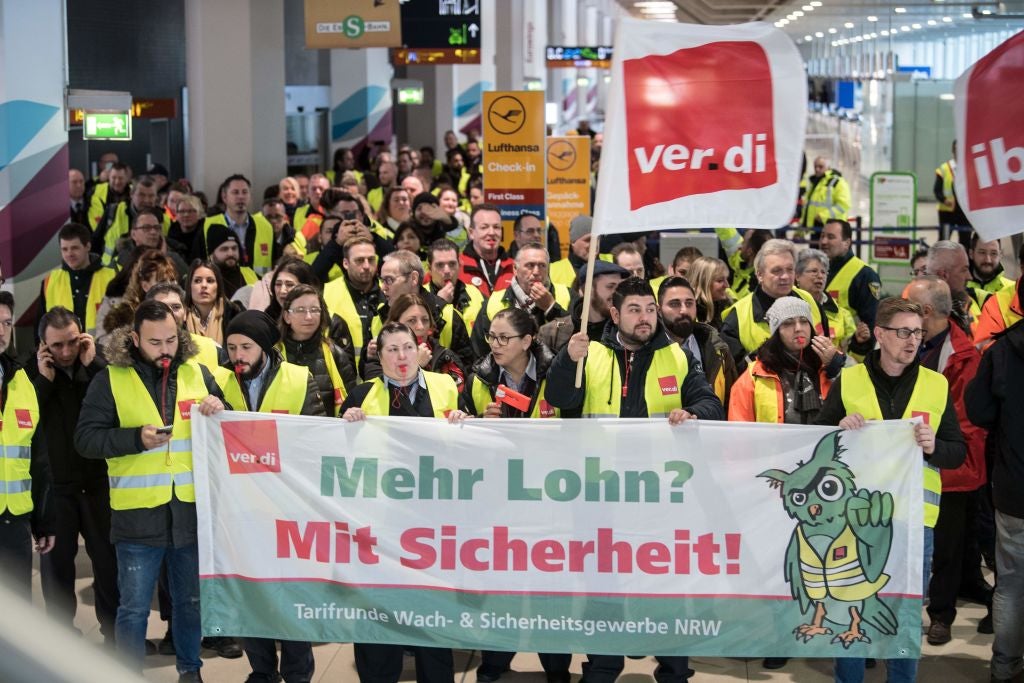 If you're traveling to Europe this summer for a long-overdue holiday, you need to be aware of potential industrial action that might affect your travel. Something of a regular occurrence over the Atlantic (you can bet Parisians have seen some sort of strike or protest for every lock placed on the Pont des Arts) it's rarely a trip-killer but it can have knock-on effects for your adventures.

Be warned though: as the continent gears up to embrace U.S. visitors with open arms for the first restriction-free summer since the COVID-19 pandemic began, your trip may be impacted by more walkouts than usual.

Here's our guide for what's going on and how to stay on top of it.

Why so much industrial strife?

Few industries in Europe have been hit as hard by the recent pandemic as the travel sector. Jobs were cut, roles were stretched and countless businesses went under. Consequently, as firms get back on their feet after a two-year hiatus, the strong union culture in Europe are now having their say, staging walkouts and disruption in favor of better working conditions and increased pay in the face of the rising cost of living. Many of these strikes have already taken place and this looks set to continue into the summer and beyond.

While many strikes are planned well in advance, in many European countries mass walkouts can happen at the drop of a ticket collector's hat. Last month, no less than 24 hours after London unveiled its multi-billion-pound Jubilee line, London’s Tube workers went on strike in a dispute over job cuts and pensions. Barely a fortnight later, on 6 June, 4,000 workers walked out again with very little notice (in the U.K. you'll see signs outside stations calling it 'industrial action') which caused chaos on the capital’s transport links for commuters and tourists alike.

Where are these strikes happening?

Everywhere and anywhere, though they are particularly common in France, Germany and Italy. This week, for instance, staff at France’s Charles De Gaulle Airport (CDG) went on strike for better pay, resulting in a quarter of flights being canceled on Wednesday. This came just days after airline staff in Italy also staged a 24hr protest amid tough working conditions. Led by the FILT-CGIL and UIL Trasporti unions, this included cabin crew for Volotea, EasyJet and Ryanair, resulting in over 35 flight cancellations on said airlines.

Dublin-based low-cost carrier Ryanair, which operates across mostly all of Europe, has seen its fair share of industrial action of late. Last month, its outspoken chief exec Michael O’Leary event went as far as to say that the unions and workers were asking for too much too soon: "In some cases," he said, "the unions are saying, COVID-19 is over, give us all the money back. Well, it's not over yet, and we do need to see the restoration of our pre-COVID profitability."

There is also a chance that passengers at Europe's biggest airports, London Heathrow (LHR) will be affected by strike action this summer after hundreds of GMB and Unite union members working as check-in and ground staff voted to hold a formal industrial action ballot. Meanwhile, British train workers are gearing up to “shut down the rail system” on 21, 23 and 25 June in a bitter feud with rail chiefs over potential job cuts, in what's been billed as the biggest strike in modern history.

Do be aware though, that industrial action in the United Kingdom is often called off at the last minute.

In response, the U.K's Transport Secretary Grant Shapps has even threatened to make industrial action illegal unless a certain number of staff can work and keep some services operational. Many other Euro rail networks, including Germany's, have also been affected by mass rail strikes in the last 12 months.

What can you do if you encounter strike action?

Firstly, stay calm. While strikes have been increasing in volume of late the chances of one directly affecting your trip is slim.

Even if you do find yourself affected, it's more likely to be a blip than a disaster. Keep an eye on airports ahead of any trips and use all tools at your disposal - including this sneaky method to see if your flights will be cancelled before the airline even knows - to ensure you aren't making any wasted journeys.

And remember: if your flight is delayed and the airline is only able to rebook you on a flight the following day, they should also find you accommodation as well.

But, as we say, this is the worst-case scenario. It's most likely that strike action will mean a slightly delayed rail service - and in most major European cities there are usually plenty of other options for traveling around. With the opening of London’s Jubilee Line, three members of the TPG U.K. team recently raced to Heathrow using train, taxi and tube, which you can see here)

Better yet, ease your mind before a big trip across the Atlantic by coming up with a Plan B for public transport from airport to hotel, or landmark to restaurant, should a strike affect you. This could even include looking up which cities accept Uber (ridesharing apps are banned in Denmark as well as parts of Germany and Italy).

Can I claim money back if services are disrupted?

As a general rule of thumb most travel insurance companies won’t cover the cost of alternative travel if strike action affects your itinerary (do check terms and conditions though). Instead your best bet will be dealing with the transport provider direct, be it planes, trains or automobiles. According to the Civil Aviation Authority (CAA) if a flight is cancelled due to the airline’s staff going on strike, and the airline has not given its customers at least two weeks warning, they are required to pay compensation for cancellation or delays.