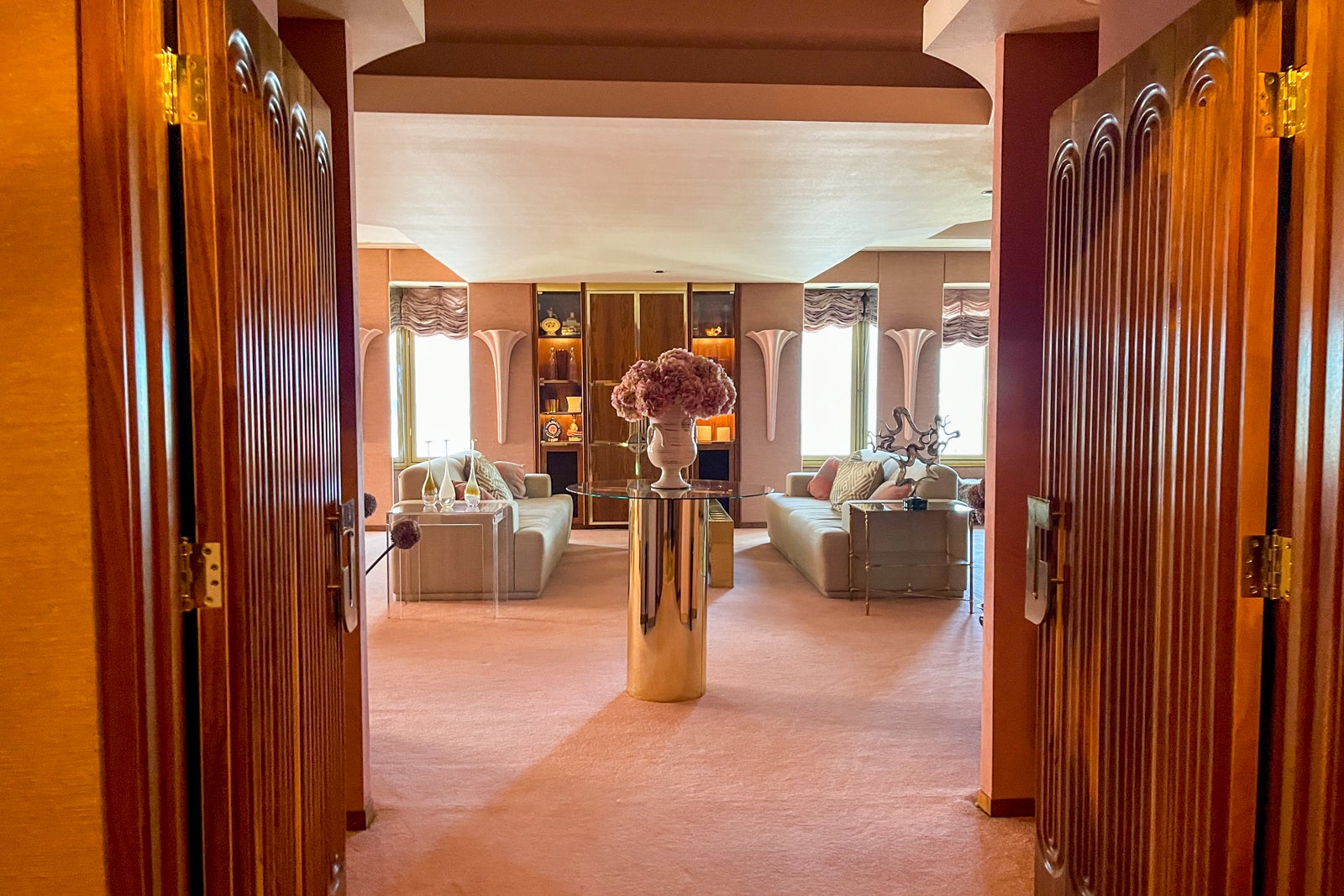 You don't need Marty McFly's DeLorean to travel back in time to the 1980s.

You just need to book a stay at the El Cortez hotel's Jackie Gaughan suite – a $1,000-per-night space that's frozen in time.

For the latest travel news and tips, subscribe to TPG’s daily e-mail newsletter.

The El Cortez Hotel, located off iconic Fremont Street, is celebrating its 80th anniversary this year. It's one of the oldest and longest continuously operating hotels and casinos in Las Vegas and part of the historic downtown Las Vegas skyline.

The El Cortez's story began in 1941 when John Kell Houssels, John Grayson and Marion Hicks built the hotel with 59 rooms off Fremont Street.

These historic rooms have been renovated and are still available to book today.

The El Cortez was sold four years later to a notorious group of mobsters that included Benjamin “Bugsy” Siegel and Meyer Lansksy, but the group's ownership of the hotel and casino was quite short, with Houssels buying back the hotel in 1946.

Houssels then kicked off an expansion featuring a barbershop, nightclub, swimming pool and a four-story wing.

In 1963, Las Vegas legend Jackie Gaughan took over the ownership of the hotel and casino. He lived at the hotel with his wife, Bertie, until his death in 2014.

Gaughan was a key force in downtown Las Vegas’s development and he actually owned one-third of the land in the area at one point. Under Gaughan's ownership, the El Cortez’s hotel room count was expanded to 297 with the building of Tower II in 1980.

Gaughan later sold the property to his business partner, Kenny Epstein, in 2008.

In 2017, the El Cortez opened the Jackie Gaughan suite to guests as a bit of "one-of-a-kind vintage Las Vegas." However, you won’t be able to book this suite on the hotel’s website like you would their other rooms.

The suite is by special request only and goes for $1,000 a night during the week and $1,500 per night on the weekends. Despite the price, the suite gets booked about once a month, according to the hotel.

The 2,800-square-foot space features two master bedrooms, a "romper" room, four balconies, two and half bathrooms, a kitchen, a vintage wet bar and large dining and living room – all done up in fabulous retro style.

The suite has been featured in magazines like Billboard and music videos like Ellie Goulding’s “On My Mind.”

The Jackie Gaughan suite is located on the 15th floor, which is the top floor of the main tower of the hotel.

It is located at the end of the hallway – you follow signs pointing to the "owner's suite."

When you get to the door, the first thing you'll notice is a call box to the left.

It is a still fully functioning, black and white, Unisonic video door phone system from the 1980s. It projects an eerily ghostly image of whoever is on the other side of the door when you answer a call from within the room.

Once inside, you are immediately greeted with the letters "J" and "G" on the handles leading into the suite's living and dining room area.

When you open the J and G doors, the room is filled with a lot of natural light due to the many windows in the space.

A pale pink color palette is consistent throughout, from the walls to the '80s-style light fixtures and curtains.

The hotel has tried to preserve as much of the original furniture in the suite as possible – although not all of it is original in this room.

In the kitchen, most of the working appliances are from the 1980s, including the refrigerator and oven.

The suite features two master bedrooms, one for Jackie and one for Bertie, and each has a dedicated bathroom.

Both the bedrooms (and bathrooms) have windows offering spectacular views of the city.

Connecting the rooms is the so-called "romper" room that features colorful artwork, swag pillows and a balcony. It's an ideal place to relax and entertain guests.

The suite features several bathrooms, but the one that screams "Las Vegas" is the one in Bertie's bedroom.

It has stunning views of the Las Vegas skyline and mirrors everywhere. There's clearly no detail that was overlooked – including the golden swan faucets in the marble bathtub.

And yes, the toilet is made of marble – and feels it like when you try to lift the cover.

One of the hallmarks of the El Cortez is how seriously it takes preserving and honoring its history. It's the only standing casino today that has been placed on the National Register of Historic Places.

El Cortez was also a place that was special to Tony Hsieh, the late Zappos CEO, who often used the Parlour Bar as a meeting spot throughout the years. The casino has dedicated a special corner to Hsieh, dubbed "Tony's corner."

For me, though, the crown jewel of the El Cortez is the Jackie Gaughan suite. Visiting it gave me the chance to relive the 1980s for a little bit – not to mention the chance to experience how a Las Vegas mogul lived for a day.

The view from one of its four balconies can't be beat, either.

Related stories
Here are the best Black Friday travel deals of 2022
Great deal: Book business class tickets at premium economy prices with this Avianca LifeMiles sale
Holiday gift guide: TPG’s 22 travel-friendly picks for 2022
Vail Resorts lift-ticket sales capped; buy your Epic Pass by Dec. 4
Featured image by (Photo by Leezel Tanglao/The Points Guy)
Editorial disclaimer: Opinions expressed here are the author’s alone, not those of any bank, credit card issuer, airline or hotel chain, and have not been reviewed, approved or otherwise endorsed by any of these entities.