Articles
Summer Hull , aka Mommy Points, ran the Mommy Points site for families who want to travel more for less using miles and points for seven years. She now heads up a variety of special projects at TPG when she isn't exploring the world with her own two girls.
Follow
Oct. 25, 2021
•
7 min read 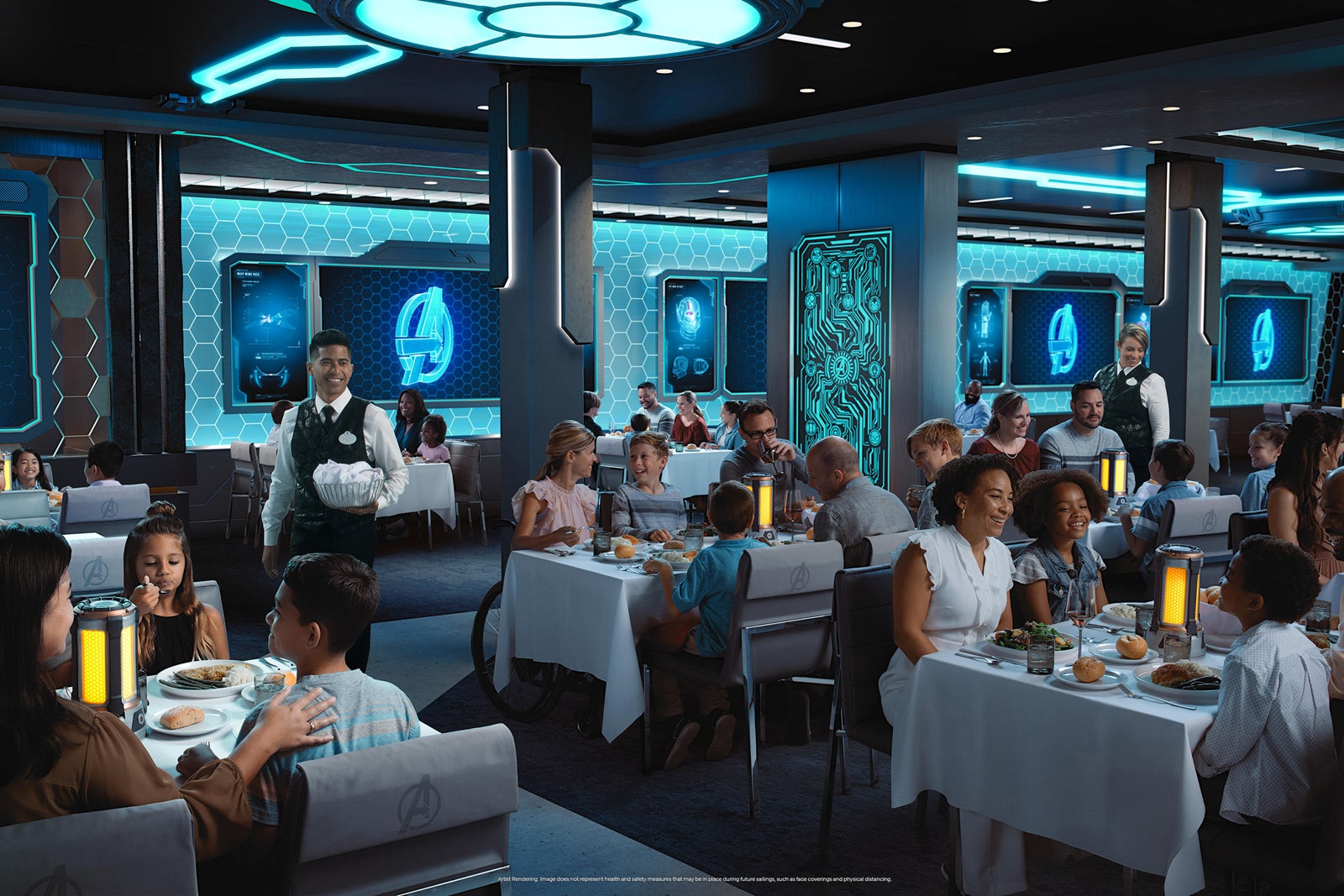 While on dry land in Central Florida for Walt Disney World’s 50th-anniversary celebration, I had the chance to attend a media preview tasting of select dinner items that will be served aboard the Disney Cruise Line’s newest ship, the Disney Wish, when it sets sail next year.

This ship is not a carbon copy of the current four ships in Disney’s fleet and instead has many all-new offerings, including three new restaurants that are unique to the Disney Wish. These three dining venues: Arendelle: A Frozen Dining Adventure, Worlds of Marvel and 1923 will serve as the included restaurants that guests will rotate through on each evening of their cruise.

The line-up of restaurants isn’t brand-new information, but we did learn three new things about dinners aboard the Disney Wish -- and got a preview of some food menu items along the way. Here’s what we know.

What we learned about Worlds of Marvel

Let’s start with the restaurant that is being described as “Disney Cruise Line’s most ambitious dining experience ever,” according to Danny Handke, senior creative director, Walt Disney Imagineering.

We knew that at Worlds of Marvel there would be appearances (both live and on-screen) from some of our favorite Marvel characters during this meal-time battle. Now we know it’s going to feel pretty darn real since the actors who bring these characters to life on the big screen are involved with creating this show for the Disney Wish.

The on-screen action taking place around the restaurant will feature Paul Rudd as Ant-Man, Evangeline Lilly as The Wasp, Anthony Mackie as Captain America and Brie Larson as Captain Marvel -- just as in the movies. We learned that each has already filmed their parts and (thank to the magic of CGI technology as the ship is still being built) it will look like they are battling the bad guys on the upper decks of Disney Wish.

But beyond that, we got to taste some desserts from the Worlds of Marvel restaurant and I have a for-sure favorite: sticky fig pudding with vanilla ice cream. I’d eaten a lot of food by that point in the day and this was still good to the last drop of salted caramel. I hope this one makes an appearance on the Wish in as-is format.

Though, if it happens to be increased in size thanks to the Quantum Cores that will be on each table -- that works, too.

What we learned about Arendelle: A Frozen Dining Adventure

In the summer, the Disney Cruise Line actually sails to ports in Europe, including calls in Norway. So, the line actually has a leg-up on already having a true sense of the flavors and ingredients that you would find in that part of the world. As described by the Disney Cruise Line’s James Willoughby when speaking about Arendelle, “It will transport you to Scandinavia and will make you feel as if the ship has found itself in the fjords of Norway.”

That’s a tall order, but based on what I sampled, I think they can pull it off.

Before we get into the food, the new detail we learned about dinners in Arendelle (which is essentially a theater-in-the-round festive engagement party for Anna and Kristoff featuring musical numbers) is that it is catered by Oaken (who runs the trading post and sauna in the films) and there will an all-new way to interact with Olaf.

Details were light on how this will all work, but Oaken will visit the table and chat with guests and somehow Olaf is bringing his charm and humor into the equation, too.

As for the food, our main course tastings were from Arendelle and consisted of first pan-seared sea bass with scallops, leeks, rainbow carrots and other fresh veggies. Our second entree sample was a juniper roasted chicken with duck fat fried potatoes and wild estragon mushrooms.

Color me a huge fan of the mushrooms, scallops and even the fresh veggies. These veggies felt like a treat rather than a “be sure to eat your veggies” task before getting dessert. Knowing what I often eat in a day on a cruise ship (um, unlimited soft serve and fruity drinks), the idea of Norweigan-inspired fresh, delicious seafood and veggies awaiting one night while dining with Elsa, Anna and their friends is something to look forward to indeed.

1923 has the ability to serve as the sleeper hit restaurant on the Disney Wish. There is no battle between good and evil, no celebratory performance by an ice queen and instead, what you will find here, we learned, is this restaurant is going to be stuffed with Disney history and memorabilia ... in an upscale and classy way.

We learned that this is where you’ll find more than1,000 drawings, props and tools used by the animators for 16 Disney films ranging from the classics such as Snow White and Peter Pan, to the big hits of the 1990s, such as The Little Mermaid and Beauty and the Beast, up the Princess and the Frog and to as recently as 2019’s Frozen 2.

Where Arendelle takes its culinary inspiration from Norway, 1923 draws from California, where the Walt Disney Company was founded during the golden age of Hollywood.

Our appetizer selections came from 1923 and included spiced ahi tuna with wasabi and yuzu mayo along with a dish of fennel, pear and tatsoi salad.

Not everything can be your favorite, and of the three courses this was not my personal line-up, but it was still good. The ahi tuna specifically was great. If you like fennel (which tastes like black licorice to me), the salad is probably a winner, but with the fennel, it’s a skip most of it and save some extra room for future courses situation for me personally.

Though that’s the beauty of Disney Cruise Line -- you have plenty of options in the dining rooms and other included dishes if any one particular thing on the menu isn’t your favorite. And they can always pull basics like chicken fingers and macaroni out of their back pockets (er, kitchen) if your kid is just not in the mood to try new things that night.

Disney Wish is still under construction in Germany, but its chefs are well on their way to creating the menus that will bring the three themed main restaurants onboard to life. While at sea, dinner is not just about choking down some food before continuing on with the evening’s tasks the way it might be some nights at home.

At sea, it’s an entire experience that you and your family become a part of ranging from the items on your plate to the setting around you and even the scenes playing out before your eyes.

Disney Cruise Line’s creative director, Denise Case, said it best when she described dinner as, “... so much more than the food. It’s about incredible storytelling that you, the guest, can participate in. We are literally putting you inside a story.”

With the A-list actors bringing the Marvel heroes to life in Worlds of Marvel, the ability to interact with Olaf and Oaken in Arendelle and being immersed in Disney animation history in an a setting that feels like Walt might be in the next booth over in 1923, the stage has been set for your family to create some fun stories of their own during dinner on the Disney Wish when it sets sail in June 2022.

Featured image by (Photo courtesy of Disney)
Editorial disclaimer: Opinions expressed here are the author’s alone, not those of any bank, credit card issuer, airline or hotel chain, and have not been reviewed, approved or otherwise endorsed by any of these entities.