Articles
Ben Mutzabaugh is the senior aviation editor and heads TPG’s airline coverage. Ben joined TPG in March 2019 after nearly 19 years at USA Today, where he launched the long-running, industry-leading Today in the Sky blog in 2002.
Follow
Jan. 07, 2020
•
7 min read 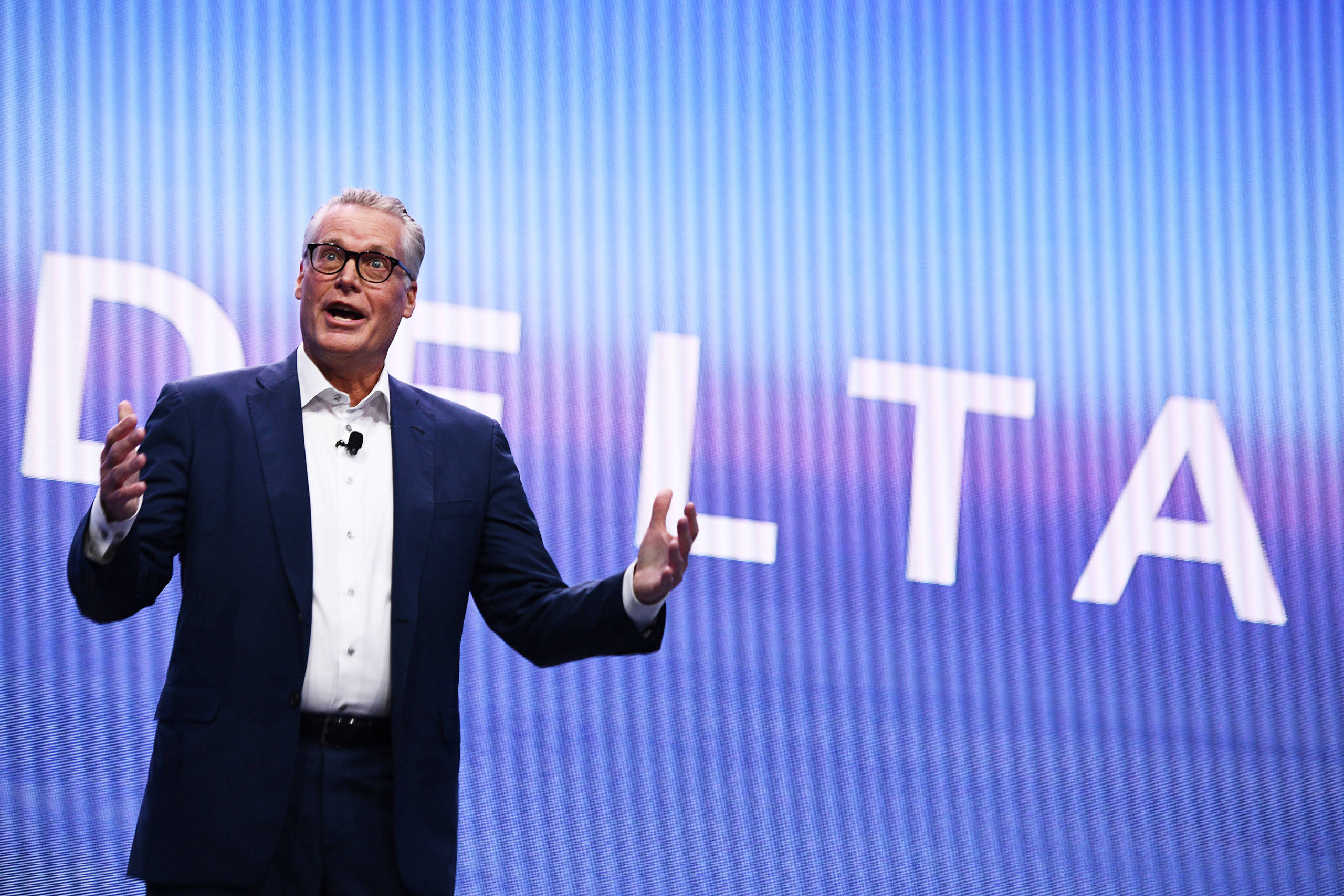 Delta CEO talks exoskeletons, 'binge buttons' and more at CES 2020
This post contains references to products from one or more of our advertisers. We may receive compensation when you click on links to those products. Terms apply to the offers listed on this page. For an explanation of our Advertising Policy, visit this page.

Delta CEO Ed Bastian touched on a number of futuristic visions during his keynote speech at the CES 2020 trade show in Las Vegas on Tuesday.

The annual event is one of the top consumer electronics trade shows in the world, and Bastian become the first-ever airline CEO to deliver keynote speech on the CES stage.

He used the high-profile platform to talk about some tech developments coming soon – “virtual queuing” and “Parallel Reality” (more on those in a minute) – and about others that remain on the wish list.

“Wi-Fi should be free,” Bastian said, reiterating previous comments that Delta hopes to some day offer it for free onboard its flights.

That won’t come immediately, though. Bastian said Delta is “working nonstop” to add the bandwidth that would allow it to roll out the option. The timeline? In “the next couple of years.”

Bastian also teased big-picture ambition for the airline’s “Fly Delta” app, describing a “bold vision” for it to “evolve into your digital travel concierge.”

He talked about a future where a travelers’ information might be stored in the app, allowing Delta to deliver a checked bag directly from a flight to a customers’ hotel.

However, Delta is ready to roll out several other new tech-related initiatives now.

Among those that Bastian formally unveiled Tuesday is a “Parallel Reality” screen that will be tested in Detroit later this year. The large digital screen would allow up to 100 passengers to scan their boarding passes and get real-time information tailored to their specific trips.

Bastian also said Delta remains committed to offering seatback entertainment screens, something that sets it apart from some of its biggest U.S. rivals.

And there are updates coming to the Delta app now. That includes “virtual queuing,” which will send push alerts to travelers when their zone is boarding –not just a general notice for their entire flight.

“That means there’s no need to cluster at the gate … waiting for your boarding group," Bastian said from the stage.

The highlights of Delta’s tech announcements Tuesday include:

Delta said it will boost the number of sign-up opportunities for the partnership on its app and said more benefits may be coming in the future. That could include paying for airport rides with Delta’s SkyMiles.

Delta said it’s exploring other options for the partnership, including “estimated arrival times powered by Lyft” for rides requested within the Delta app, and a possible test of “a dedicated premium Delta-Lyft experience at some of the busiest U.S. airports.”

The improvements to the Lyft experience come on top of the virtual queuing feature, which will roll out later this month.

Delta notes both come after other recent tweaks to its app, which including the ability to pre-select inflight meals and a test of showing TSA wait times at certain airports.

Delta has been something of an outlier by sticking with seatback entertainment screens on most of its planes, and the carrier reaffirmed its commitment to that strategy at CES.

Delta said it’s looking to expand its studio partnerships for its inflight entertainment hub. It’s also looking to test a new “binge button” feature that would allow customers to watch multiple consecutive episodes of a show, like has become popular with customers of platforms like Netflix, Hulu and others. No specific timeline was provided for when that might come.

That’s part of what Delta described as an effort to double down on seatback screens.

“Our research tells us that customers really enjoy and appreciate entertainment – it is their ultimate destressor in flight,” Tim Mapes, Delta's Chief Marketing & Communications Officer, said in a statement accompanying Tuesday's CES appearance by Bastian. “That’s why we keep extending our position as the entertainment airline and continue growing our in-house expertise through Delta Flight Products – allowing us to explore a future where captivating content becomes part of the entire customer journey, not just in the air.”

Delta customers passing through the airline’s Detroit hub later this year will be able to check their connecting flight info and get wayfinding help with a new “Parallel Reality” feature.

The technology, which Delta is rolling out in a partnership with Misapplied Sciences, allows travelers to go to a large digital screen that will render information specific to each passenger that comes it to it.

Travelers scan their boarding pass and the wall will return flight information specific to each traveler. That information, which will display in that traveler’s preferred language, could offer information like reservation details or directions to the traveler’s departure gate or nearest Sky Club.

For the beta test coming to Detroit, Delta says the Parallel Reality will can accommodate up to 100 travelers at a time. The technology will render a user’s information in a way such that it cannot be seen by adjacent travelers, Delta says.

Delta is already among the U.S. leaders in on-time flights, but the company says it’s ready to employ a new artificial intelligence (AI) tool to help if further improve its reliability.

The technology, developed in house, will be used in the company’s Operations & Customer Center (OCC). It’s meant both help predict outcomes during poor weather and other “irregular operations” events and to learn from data extracted from previous storms and events.

Delta said it would launch its initial live implementation this spring, adding that it expects the AI tool “to continually become more effective over time, as more data is collected and integrated.”

Yes, “exoskeletons.” Delta plans to test the “wearable” technology that it described as a “first-of-its-kind wearable robotic exoskeleton.”

The tech is meant to “boost employees’ physical capabilities and bolster their safety,” the carrier adds.

The devices, developed for Delta via a partnership with Sarcos Robotics, have been designed to help frontline workers with strenuous tasks.

In its release accompanying Bastian’s CES speech, Delta says the battery-powered Guardian XO suites “may enable an employee to lift up to 200 pounds repeatedly for up to eight hours at a time without strain or fatigue.”

Delta said it will test the suits during the first quarter of 2020 at a location in its network to assess the efficacy of the suites in a “real-world setting.”

Related stories
Legislation that could gut credit card rewards set to move through Congress
Would you stay at 1 of these 8 haunted hotels this Halloween?
Southwest winter flash sale: Get one-way flights for as low as $29
You can currently buy points and miles with up to a 100% bonus — but should you?
Featured image by Bloomberg via Getty Images