Articles
Alberto Riva Alberto runs our flight reviews and oversees special projects across several verticals. Previously, he was the managing editor of Vice News and worked at Bloomberg and CNN, where he was constantly trying to convince people to do more stories about airplanes. He speaks Italian, French and Spanish and one day he’ll be better at German.
Follow
Oct. 24, 2019
•
6 min read 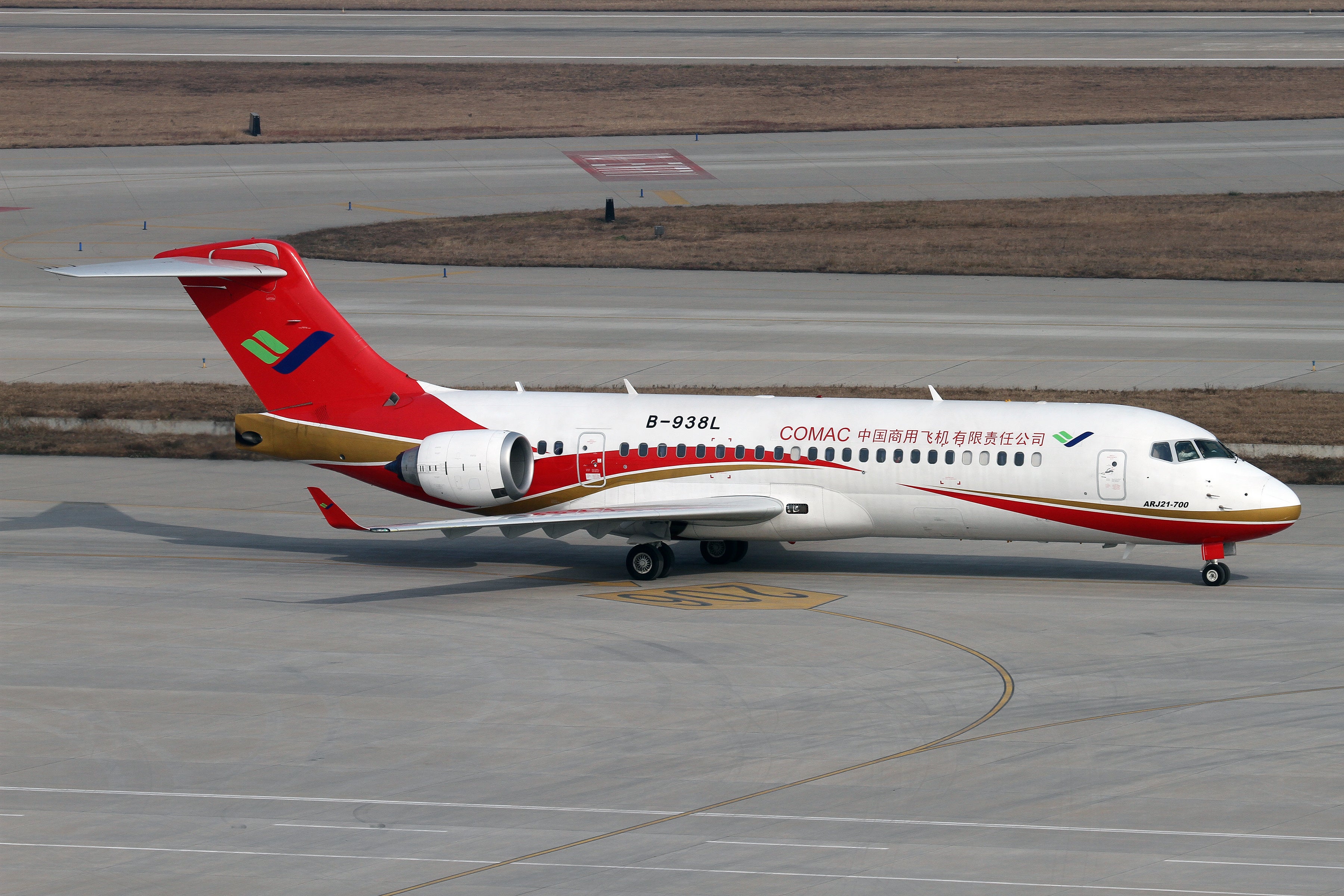 China’s first homemade jet takes its first international trip
This post contains references to products from one or more of our advertisers. We may receive compensation when you click on links to those products. Terms apply to the offers listed on this page. For an explanation of our Advertising Policy, visit this page.

You may not have heard of it, but it's been around for a few years, and it's kind of a big deal. At least in its homeland. But it's never left it, and that was a problem — until now, when it's venturing for the first time outside its native territory.

We are talking about the first passenger jet made in China, the Comac ARJ21. It's the airplane that proved China was able to build its own jet airliners, if not at the same rate Boeing and Airbus do.

The 90-seat plane, a lookalike of the Boeing 717 with the same engines from the Bombardier and Embraer regional jets, entered service in 2016 with a Chinese carrier, Chengdu Airlines. Until now it has served just the mainland domestic market; most non-Chinese travelers have never seen one, let alone flown on it. It's still a bird so rare that when a U.S.-based travel blogger flies on an ARJ21, it makes news.

And now, according to Routes Online, the ARJ21 is making is first foray abroad. Granted, it's just a 329-mile hop from Harbin in the north of China to Vladivostok on Russia's Pacific coast. It's unlikely that many passengers other than Russian or Chinese nationals engaged in the vibrant cross-border trading in the area will board the plane. But when the twice-weekly flight begins on Saturday, it will be a momentous occasion.

For the first time ever, an indigenous jet airliner made in the People’s Republic of China will have left the country and landed abroad on a scheduled commercial flight.

The ARJ21 is not a resounding commercial success. In 12 years since its first flight, government-owned Comac has managed to deliver about 20, to only two customers, Chengdu Airlines and Gengis Khan Airlines. Compare that with the production rates of a Western jetliner of similar size, the Brazilian-made Embraer E190, which rolls off the production line at a rate of eight planes a month. And that's for a plane China is making with a lot of American and European technology; if the ARJ21 looks like a hybrid of several Western airplanes you commonly see around the world, that's because it is. It bears a close resemblance to the Boeing 717, itself a rebranded heir to the Douglas DC-9 family. It's not a stretch to say that the ARJ21 has roots in a design conceived in the mid-1960s in Long Beach, California.

But don't be fooled into thinking that China's commercial aviation industry is going to remain irrelevant. Yes, Comac is a bit player now, and the only way you can fly on its lone product is to travel to places whose names most Americans have never heard of. Chengdu Airlines itself flies mostly European-made Airbus planes, and the ARJ21's other operator, Gengis Khan Airlines, is tiny and does not range very far — unlike its namesake emperor — from its base in Inner Mongolia. But the Chinese government is investing hugely in commercial aviation manufacturing, and Comac is working hard on its next airplane, the C919.

It's bigger than the ARJ21, the same size as the Airbus A320 or Boeing 737, and features a thoroughly more modern design. While it's also being plagued by delays and largely made with Western technology, it's a major step forward for Comac in terms of handling the logistics and engineering involved in a 21st-century aircraft production process. Astute observers of the aviation industry are also noting that Chinese firms are buying European and American firms whose products are crucial to planemaking.

The C919 will also likely be a large step forward in exposure to passengers. China Eastern Airlines, a very large carrier that's also a member of the SkyTeam alliance and a partner of Delta, has ordered 20, and so have flag carrier Air China and the biggest airline in Asia and possibly soon the world, China Southern. It's true that for airlines that big, an order for 20 machines is a blip — and probably also a mandate from the government, keen on giving the flagship domestic airplane a boost. But it will put that product in front of international flyers. And Comac is also working on a joint project with Russia, which has a long planemaking tradition, to build a long-haul twin-aisle jet, the CR929.

One can observe that even that ambitious airplane exists only on paper, and is likely to stay there for quite a while. Boeing and Airbus aren't quaking in their boots, and Boeing for one has far bigger problems to deal with now than a Chinese would-be rival unable to deliver planes on time. Aerospace manufacturing presents a unique set of challenges, which China hasn't quite cracked yet. But the history of the rise of China as an industrial power tells us that at some point it will.

So, yes, today you may have to venture very far to find the one passenger jet bearing a Made in China label. But one day, the descendants of the humble ARJ21 will probably be found far closer to you.

Related stories
Legislation that could gut credit card rewards set to move through Congress
Would you stay at 1 of these 8 haunted hotels this Halloween?
Southwest winter flash sale: Get one-way flights for as low as $29
You can currently buy points and miles with up to a 100% bonus — but should you?
Featured image by Visual China Group via Getty Ima