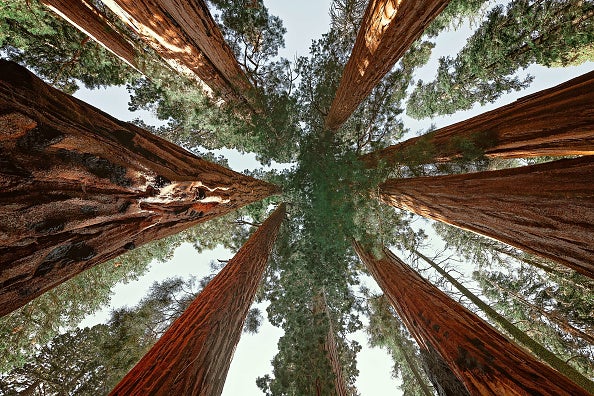 Sequoia National Park Is Getting Its First Cell Tower — And Not Everyone Is Pleased
This post contains references to products from one or more of our advertisers. We may receive compensation when you click on links to those products. Terms apply to the offers listed on this page. For an explanation of our Advertising Policy, visit this page.

In central California, a proposal from Verizon Wireless to install a cell tower in Sequoia National Park has been approved. But the decision to bring technology to the wilderness can have both positive and negative effects.

Verizon proposed the 138-foot-tall tower back in 2017, and has been working with park officials to hammer out details ever since. Construction on the tower hasn't begun yet, but the project is scheduled to be completed by November 2020.

Sequoia National Park is by no means the first national park to approve the installation of a cell tower. Neighboring Kings Canyon, Yosemite, Yellowstone and Mount Rainier National Parks all have towers in place. Cell coverage provided by the tower will only extend into what's called "front country," and will only cover a small percentage of the park's wilderness. In fact, 96% of the park's wilderness area still will not have cell service once the tower has been completed and cell towers cannot be built in designated wilderness area per the Wilderness Act of 1964. Visitors outside of the tower's range will still be off the grid, so to speak.

TPG spoke to Sequoia National Park public affairs officer Sintia Kawasaki-Yee, and chief of planning and compliance, Nancy Hendricks, to find out how the agency made its decision, which is covered under the Telecommunications Act of 1996. After reviewing Verizon's application to determine if the tower wold be appropriate for the park, the agency started scouting for suitable locations. The agency also prepared an environmental assessment and analysis of whether or not the tower would adversely affect critical resources after consulting internally with wildlife biologists, ecologists and a wilderness management specialist about potential environmental impacts.

The answer, apparently, was no. "There was no potential for significant impact," Hendricks said. Once the reports were in, a regional director signed off in February of 2018.

The agency also asked for input from the community, not once but twice. The department got both positive and negative feedback. The negative being that people were concerned that a cell tower would adversely affect their experience in the park. "A lot of visitors come to get away from tech. They don't like the sights and sounds of people on their phones," said Hendricks.

In response, the agency said it urges visitors to use cell phones only when necessary — not to check Instagram or carry on a FaceTime conversation with friends.

"We can't make cell phones illegal to use, but we can provide messaging that you're in a national park — leave your tech off unless you really need it," said Hendricks. In addition to overseeing plans for the tower, the agency is also working on guidelines and signage to help visitors with proper park etiquette.

Tim Whitehouse, executive director of the Public Employees for Environmental Responsibility (PEER) organization, is less crazy about the idea of cell towers in national parks, but seconds the call for a certain level of park etiquette. "Be aware of people that may be out there to enjoy the quiet and solitude. Be aware of your surroundings — and that includes other people and what they want to get out of the experience," Whitehouse said. He advised park visitors to turn cell phones on silent mode and speak quietly while on calls.

The positive feedback heard from the community centered around health and safety. "If visitors are up in the park and have an accident, it can be hard to get ahold of a ranger," Hendricks said. The community also voiced support about improved communication when it comes to coordinating with friends and family on whereabouts while in the park, and about park activities, such as highway construction and parking updates, as well as weather advisories. "Unless you have a really solid plan to meet, it's hard to coordinate," said Hendricks.

Tower or no tower, that hasn't stopped visitors from using theirs phones while in the park. "We're already seeing the effects of people trying to capture the perfect photo — whether or not they have cell service," said Hendricks.

It wasn't an easy decision, but one deemed beneficial overall for both the park and the park's visitors. "We weighed the benefits and impacts of having a cell tower at this site and the benefits outweigh the adverse effects," Hendricks added.

The agency implores community member to be vocal about issues such as this. "I encourage people to get involved ... People don't realize how much ability they have to be involved in the process," said Kawasaki-Yee. Comments can be submitted through the website of the National Parks.

Whitehouse said that, although he doesn't know much about the specific plans at Sequoia National Park, he hopes the National Park Service will be transparent with the public, and that there is an effort to, "keep wild places wild".

"We're not against cell phones; they serve a really important purpose in many places," Whitehouse said. But, he added, "There is an aesthetic and other values associated with being removed from the modern world in some areas of the country."

At the end of the day, he said, it's "a personal choice."

Related stories
Air Canada adds 2 new routes to United hubs, with more likely to come
Chase cardholders: Check your eligibility to earn up to 10 bonus points per dollar in select categories
7 things to know before booking a stay at Breathless Cabo San Lucas Resort & Spa
Get more from your points with these transfer bonuses
Featured image by LightRocket via Getty Images

Our points-obsessed staff uses a plethora of credit cards on a daily basis. If anyone on our team wouldn’t recommend it to a friend or a family member, we wouldn’t recommend it on The Points Guy either. Our opinions are our own, and have not been reviewed, approved, or endorsed by our advertising partners.
See all best card offers
Related stories
News
Air Canada adds 2 new routes to United hubs, with more likely to come
News
Chase cardholders: Check your eligibility to earn up to 10 bonus points per dollar in select categories
Reviews
7 things to know before booking a stay at Breathless Cabo San Lucas Resort & Spa
Guide
Get more from your points with these transfer bonuses