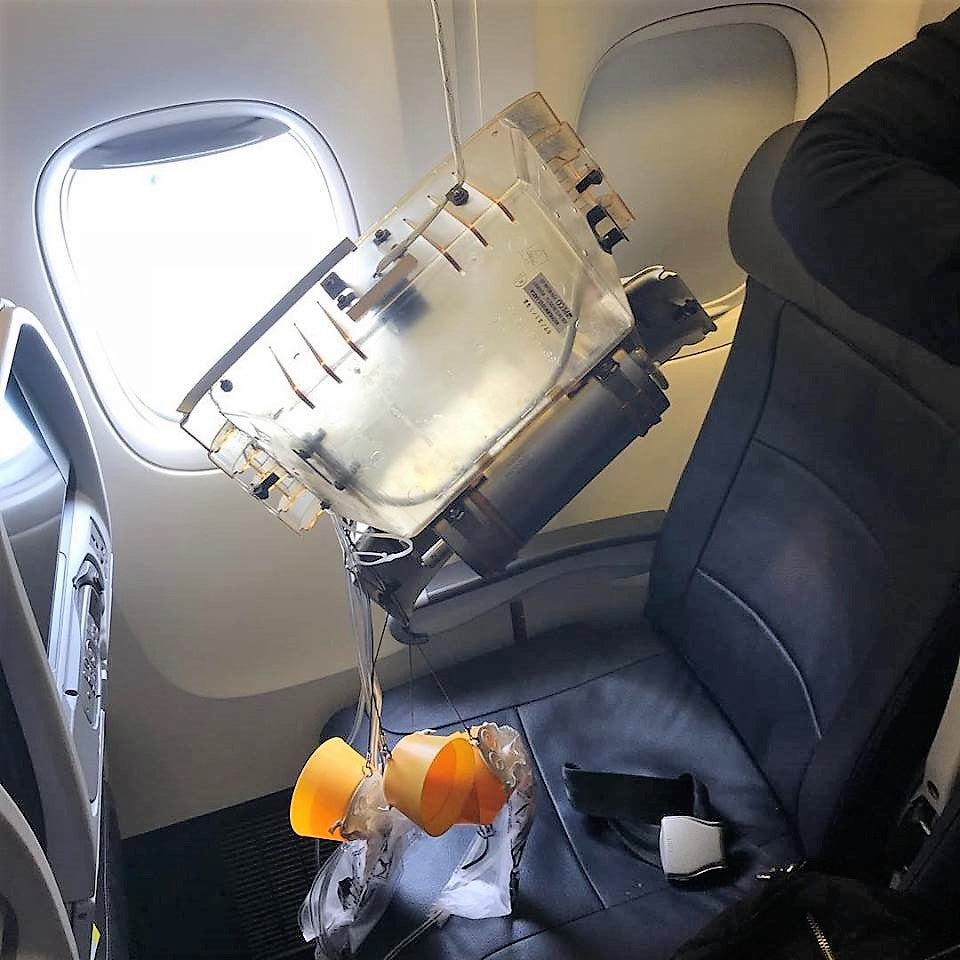 Ceiling Panel Falls on Infant's Head During AA Flight Landing
This post contains references to products from one or more of our advertisers. We may receive compensation when you click on links to those products. Terms apply to the offers listed on this page. For an explanation of our Advertising Policy, visit this page.

Airlines remind passengers to be careful when opening overhead bins as bags may have shifted in flight, but airline passengers aren't supposed to beware of ceiling panels falling on their heads during flight.

Unbelievably, that's what happened on an American Airlines flight Saturday. Even worse, the heavy panel — including an oxygen tank — fell directly onto an infant. And the mother is livid at American Airlines' response.

The incident happened on American Airlines flight #126 from Hong Kong (HKG) to Dallas/Fort Worth (DFW). Upon landing after the 14-hour flight, the panel above seat 35L was jarred loose, falling directly onto the infant's head as he was being held in his mother's arms for landing.

In response to comments on her Facebook post about the situation, the mother explained that there was no blood from the contact. She received an apology from the "flight attendant that witnessed it" and was directed to wait for an American Airlines gate agent upon arrival. The mother and infant waited at the gate until disembarkation was complete, at which time the captain exited the plane and apologized about the situation. But, still there was no airline agent to assist.

So, the mother continued to a customer service desk where she reportedly "waited for over 1.5 hours at customer service and supervisors were too busy to come help us." It's unclear if she eventually received help from the airline customer service agents before connecting to their flight to Denver (DEN) that afternoon.

TPG reached out to American Airlines for comment. The airline responded its "primary concern is for the Zanone family and their young child."

Our customer relations team is in the process of reaching out to Mrs. Zanone to offer additional support and obtain details of what transpired at Dallas/Fort Worth yesterday. Customers trust us to take care of them and we take that responsibility seriously. Our flight attendants offered to request medical personnel meet the aircraft upon arrival at the gate, but that request was declined by Mrs. Zanone.

The airline's technical operations teams are also working to understand how this situation could have occurred. The aircraft has been inspected, repaired and returned to service.

Airline passengers have enough to worry about without having to be concerned about equipment panels falling on their heads. However, all sorts of wild situations can happen on a plane, and injuries can and do occur. Airlines should have agents trained and empowered to tackle these situations immediately. Yet, some airport airline customer service agents are failing at the crucial task and making situations worse.

It'd be bad enough if a passenger experienced this situation at a remote airport had to wait for hours for customer service response. However, this happened upon landing at the home airport for the world's largest airline. The lack of response onsite and since the situation is embarrassing.