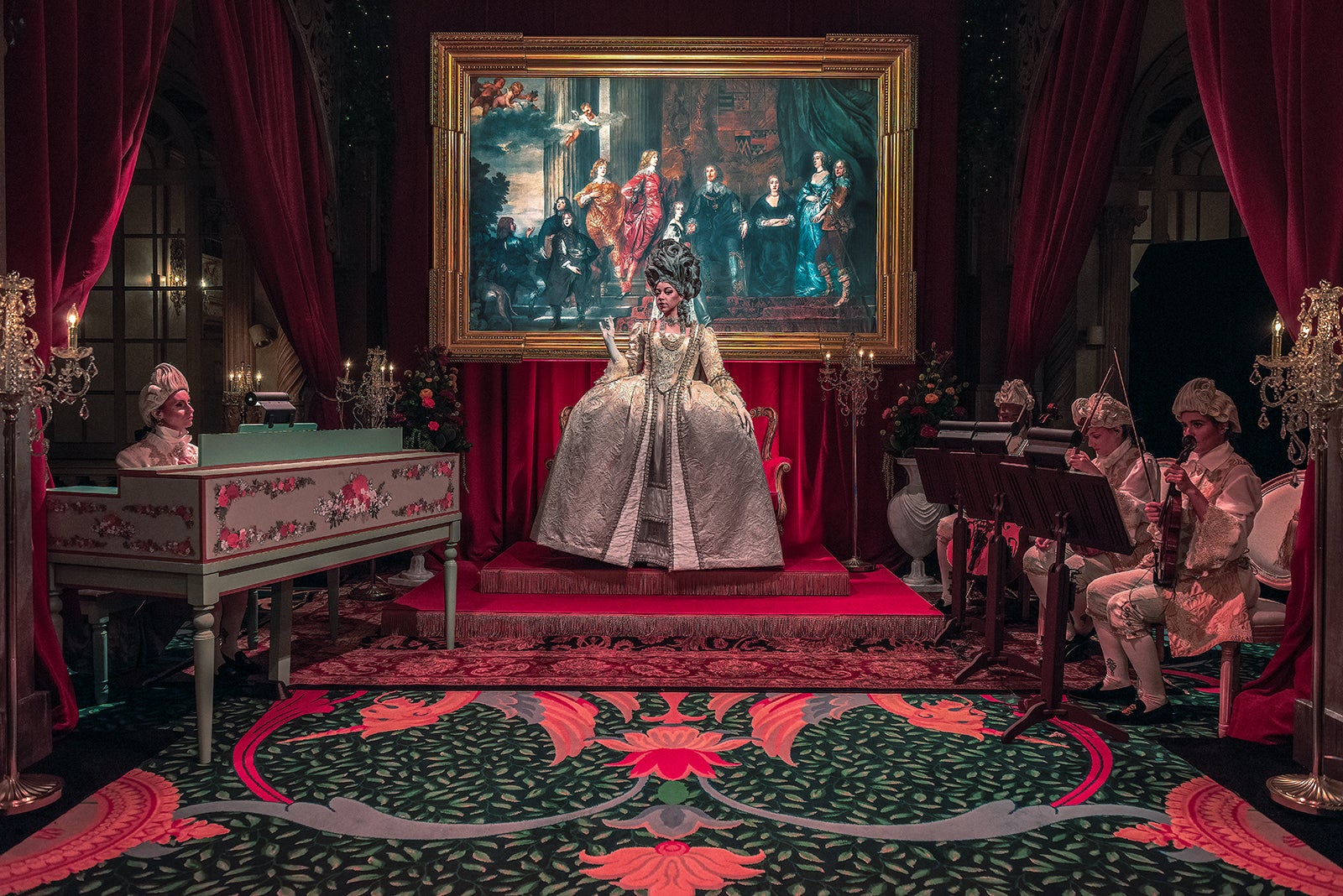 If you're familiar with Netflix's hit show "Bridgerton," you're familiar with that greeting. It's the voice of Lady Whistledown, the series's mysterious resident gossip columnist, voiced by Julie Andrews. It's also the opening line of the invitation you get when you sign up for "The Queen's Ball: A Bridgerton Experience," the interactive theater show put on by the event company Fever that allows guests to live out their Regency-era fantasy for a night.

The event takes place in limited runs in cities across North America, including Atlanta, San Francisco, Montreal and Washington, D.C. A friend and I recently got the chance to make our curtsy to the queen at the Washington show, and I can't recommend it enough.

"The Queen's Ball" isn't your typical theater performance; it's more of an interactive variety show. Guests and performers alike are in Regency-era clothing, or at least their black-tie best, and the space is filled with Instagram-worthy settings, like an entryway covered in lighted purple wisteria and a throne room with a red-and-gold velvet chair fit for royalty. There's even a station where you can sit for a digital portrait.

When the show starts, guests are presented to the queen and expected to make their best bows and curtsies. The cast then leads visitors in a choreographed dance, one of several that happen throughout the show. Don't panic if you're not the graceful type; you're welcome to sit out the dances or watch the entire thing from the sidelines, though it's much more fun to participate.

The main attraction is the cast of characters that interact with the crowd and occasionally take over moveable stages for various show-style performances, including a violin solo, acrobatics and choreographed dances. While the characters in the performances are from the same world as "Bridgerton" and the theme is one of scandal and a forbidden love affair, none of the characters are specifically named as being the same as those from the television show.

In fact, no one is specifically named at all, as most of the performances are physical in nature, with no lines spoken. Most of the spoken interaction comes from the cast members in the crowd and seems to be mostly improvised.

For example, during one of the more heated dance numbers, one of the queen's guards started a whispered conversation with me about how scandalous the behavior of the couple on stage was. It's these little impromptu interactions that really make the show by blurring the lines between the cast and the audience.

An excuse to play dress-up

If you're planning to attend this event, be sure to break out your best formal attire. Though a Regency-era costume is not required, it will certainly be more fun if you can fit in with the cast and other guests, many of whom were dressed in the typical Regency-style clothing worn in the television series.

My guest and I both went in costume. Mine was a simple blue satin gown I purchased on Amazon for less than $100, while hers was a more elaborate white affair that she had sewn herself. There are even more elaborate options available on Etsy, though naturally the more elaborate, the heftier the price tag.

Gentlemen have things a bit easier, as a vest and cravat added to your best suit will give you a Regency air without too much fuss or cost. There are also more historically accurate outfits for men available on Etsy, and a full nobleman's suit will set you back a few hundred dollars.

One of the things I love most about the television show "Bridgerton" is the diversity of the cast. It's rare to see such a diverse cast in a period series, and as a frequent attendee at costumed events like the Renaissance fair, it can be equally as rare to see at period events as well.

Though costumed events of this nature don't typically tend to be super diverse, I had hoped that seeing themselves reflected in the show would lead more people from all backgrounds to try this event, and I wasn't disappointed. The visitors, the cast of the show and even the behind-the-scenes crew all represented diverse backgrounds.

Accessibility in the (pretend) Regency era

When you walk into the event, you're greeted by a sign that mentions that some elements of the show might not be good for those with seizure disorders, which my companion at the event did have. To be safe, we mentioned to the security staff that my friend was sensitive to flashing lights, and we were thrilled to find that instead of turning us away, the behind-the-scenes crew went above and beyond to accommodate us.

First, the producer of the show came over to tell us exactly what part of the show had the lights. She then let us enjoy the first part of the show while she went backstage to chat with the lighting tech. He eventually came to find us and get some information about what he could do to accommodate her. When the potentially problematic part came up, the producer again came over to warn us and hovered a bit just in case we needed help. However, whatever accommodations the lighting tech had made seemed to work fine, as there were no issues, and we were able to participate in the festivities, same as everyone else.

The event lasts only about 90 minutes, from the queen's entrance at the beginning to the final dance at the end of the show, which in my opinion was not quite long enough. You don't really have enough time to watch the performances, participate in the interactive pieces and take full advantage of the beautiful sets and photo opportunities, which seemed a bit of a shame.

We also noticed that there was a mystery to solve that was noted on the back of "Lady Whistledown's Society Papers," which everyone received when they entered. It wasn't mentioned during the show, and it wasn't until after we returned home and had time to look over what we'd been handed that we noticed the hints there. If there wasn't time to read the paper, there certainly wasn't time to solve the mystery, so I'm still not quite sure what it was or how involved it would have been.

Getting an invitation from the queen

We attended the Washington event, which was held in the Whitfield Entertainment Group Studios. Ticket prices ranged from $65 for a regular entry ticket to $109 for a VIP ticket. VIP tickets included early entry to the ball, a welcome glass of Champagne, a 20% discount on selected merchandise and access to a special VIP section.

Though the Washington run is at an end, the show is still playing from Wednesday to Sunday in San Francisco until Sept. 11 and in Atlanta until Sept. 18, with more locations to be announced soon. Tickets for all shows are available from Fever.

Featured image by FEDERICO IMPERIALE
Editorial disclaimer: Opinions expressed here are the author’s alone, not those of any bank, credit card issuer, airline or hotel chain, and have not been reviewed, approved or otherwise endorsed by any of these entities.