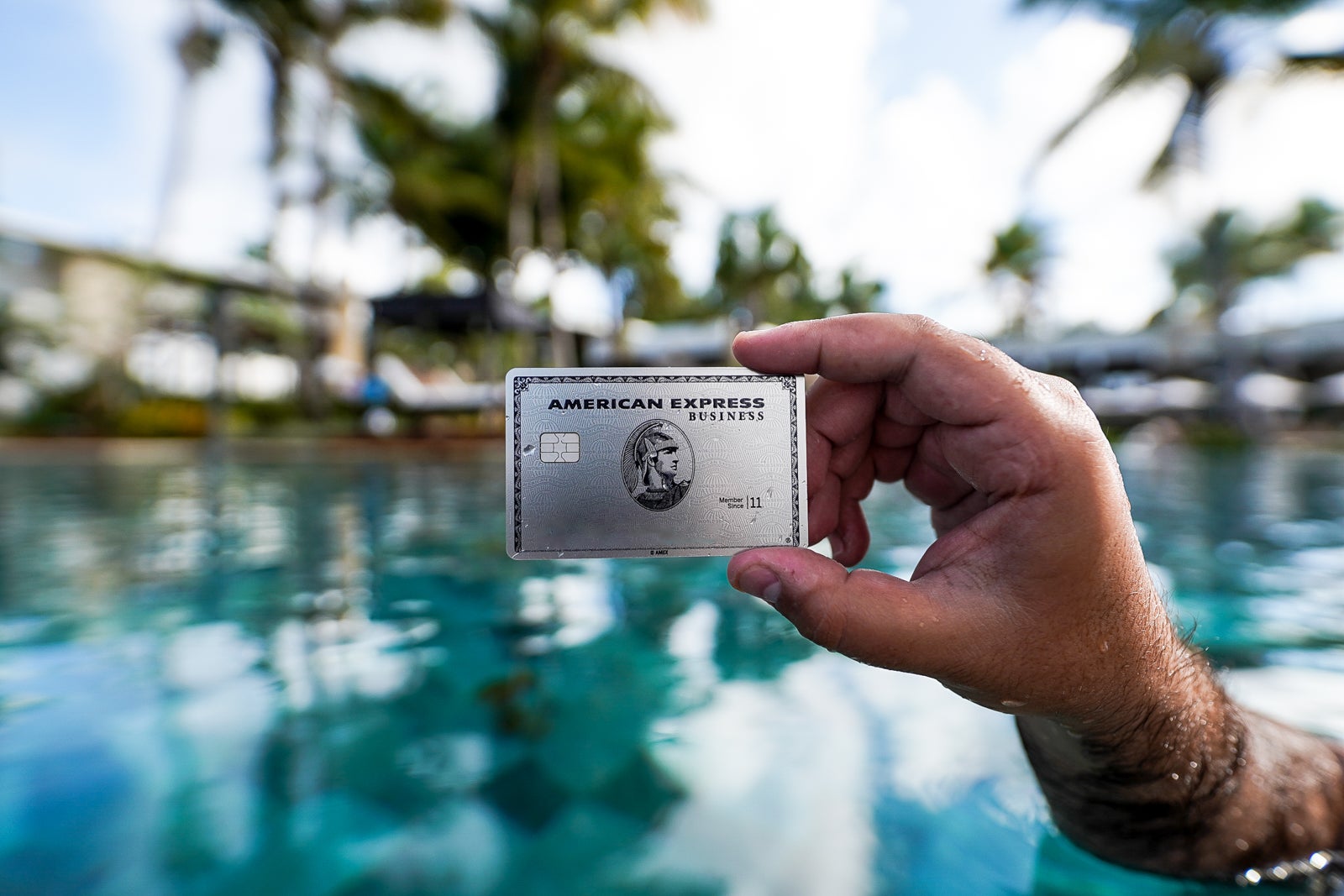 In 2015, Chinese billionaire Liu Yiqian used his American Express Centurion card to purchase a $170 million painting. So I assumed it would be possible to replace our family's minivan with a new one, and to charge it to The Business Platinum Card® from American Express, with its $595 ($695 if application is received on or after 1/13/2022) annual fee (see rates and fees). But I didn’t realize how easy it would actually be.

How we decided to buy a new car with a card

When I travel, I frequently take buses to avoid paying for Uber, so you could say that I’m a pretty frugal person as personal finance experts go. So it felt like quite a splurge for us to replace our family’s minivan with a brand-new one. But with surging prices for used cars, it actually made good financial sense for us to buy a new Chrysler Pacifica Hybrid with all the options.

After a $7,500 federal tax credit and a $4,000 credit from the state of Colorado, we were able to purchase a new one for about the same out-of-pocket cost as one that was a few years old. And if we managed to charge the entire purchase price to my American Express Business Platinum card, the value of the rewards that I earned would make up the difference.

Related: The best credit cards for purchasing a car

Successfully buying a new car with a credit card would involve convincing both the dealer to accept my card as payment for the entire amount and ensuring that my card issuer would approve the transaction. Convincing the dealer is always the hard part, but it’s one that I’ve had some experience with before, albeit when purchasing much less expensive used cars.

The key to handling the dealer is to recognize that by accepting your credit card, it will incur a merchant processing fee that’s likely to be somewhere between 2% and 3% of the total amount of the charge. But when the salesperson first asks how you’d like to pay for the car, just say “cash,” which is to say that you don't need financing. Only after you’ve negotiated the best price should you let the dealer know that you’ll agree to the purchase only on the condition that you can charge it to your credit card.

If my past experiences are any indication, the salesperson will not be happy. Expect to hear a range of excuses why it’s impossible to purchase a new car with a credit card, including everything from the risk of fraud to the dealer’s “policy” (that’s conveniently never in writing). But once I’ve made it clear to the dealer that the only way I’ll be able to make the purchase is with my credit card, they’ve always backed down.

Currently, the Business Platinum card is offering a welcome offer of 120,000 Membership Rewards points after spending $15,000 on eligible purchases within the first three months of account opening.

Earning this bonus, worth a generous $2,400 according to TPG’s latest monthly valuations, might normally be a challenge, but it can be done in a single transaction — especially if you're buying a new car.

With that in mind, I called American Express to ask if they would be willing to approve a charge of $44,819.98, which was the out-the-door price of our minivan including tax, tag and title fees. According to TPG’s latest monthly valuations, American Express Membership Rewards points are worth 2 cents each. So if successful, this charge would result in 67,230 points, worth $1,345, or 3% of the total sales price of the car. To receive those points, you'll have to be a little bit patient, considering the complicated way Amex awards Membership Rewards points.

Before I attempted to charge nearly $45,000 to my card, I thought it was a good idea to first contact American Express and see if it would even approve the transaction. When making the call to ask for pre-authorization, I had a feeling similar to applying for a home loan. In fact, I was expecting to be asked a lot of probing questions about this unusually large purchase, and about the current state of my finances. But once I got through to a representative, the conversation went something like this:

Me: “I’d like to see if it might be possible to use my American Express Business Platinum card to purchase a new vehicle for approximately $45,000.”

At the dealer the next day, the process couldn’t have been any easier. After signing all manner of forms and disclaimers that are standard with any new vehicle purchase, my account manager saw the salesperson's note that I would be paying by credit card. He entered the sales price into his credit card terminal and turned it over to me to insert my card.

I was actually expecting the terminal to reject the transaction and to display some unusual code asking the dealer to contact American Express for verification. But to my surprise, the transaction went through just as quickly and easily as if I was buying a new pair of wiper blades. So naturally, I just acted as if I make $45,000 charges to my credit card every day.

Paying off the charge

According to the terms of the Amex Business Platinum, I have until the payment due date, 25 days after the close of each billing period, to pay off my charges and avoid interest. After that, I can use this card’s Pay Over Time feature and incur interest at the current variable rate of 16.49% - 24.49% (see rates and fees). The rate I would have paid was based on my creditworthiness as determined at the time of account opening. Clearly, anyone would be much better off applying for a vehicle loan than financing their car or truck at these interest rates.

But rather than waiting until my payment due date, I decided to pay off my entire balance in full before my account's statement closing date. Doing so meant avoiding having such a large balance being reported to the major consumer credit bureaus as debt, which would have reduced my credit score until the end of my next billing cycle when the debt would be reported as paid. So I took the $11,500 that I had that I would have paid that year in federal and state taxes, the $16,000 I received from selling our old minivan and $17,303 of our savings and paid off the entire charge shortly after purchasing the vehicle.

Other tips for buying a car with a credit card

3. Pay down any existing balances first. The higher your current balances on your cards, the less credit you’ll have available to use to make a new purchase. So if you’re concerned about your card issuer approving a very large charge, and you have the cash, pay off all of your existing balances with that card issuer before asking for approval of the large purchase. And if you have large outstanding statement balances with other card issuers, you’ll want to pay them off first and wait for the end of the next statement period in order to have your lower balance reported to the consumer credit bureaus, and a higher credit score.

4. Choose the right card. The Business Platinum made sense for me, as I was happy to earn 1.5x points per dollar. Another great card to use would have been The Blue Business® Plus Credit Card from American Express, which offers 2x points on up to $50,000 in purchases each year (then 1x).

5. Consider applying for a new card with a generous new account bonus. The most valuable new account bonuses often include a large minimum spending requirement. For example, the Capital One Venture Rewards Credit Card currently has a welcome bonus of 75,000 bonus miles after you spend $4,000 on purchases within the first three months of account opening. You could reach that in one transaction by purchasing all but a few of the least-expensive new cars available today.

The American Express Business Platinum offers a myriad of features and benefits. And it doesn't let you down when making even the largest charges — such as a brand-new car. But before doing this, make sure you have the cash on hand to pay off the card by the monthly due date. Although the card's 120,000-point bonus is really tempting, the interest charged when you don't pay off that bill immediately isn't worth it.

For rates and fees of the Amex Business Platinum, click here.

Related stories
Legislation that could gut credit card rewards set to move through Congress
Would you stay at 1 of these 8 haunted hotels this Halloween?
Southwest winter flash sale: Get one-way flights for as low as $29
You can currently buy points and miles with up to a 100% bonus — but should you?
Featured image by (Photo by Isabelle Raphael/The Points Guy)
Editorial disclaimer: Opinions expressed here are the author’s alone, not those of any bank, credit card issuer, airline or hotel chain, and have not been reviewed, approved or otherwise endorsed by any of these entities.