Articles
Alyssa Cerchiai rounds up the top travel stories each week and covers news on the weekends. If you catch her at the airport, she’d happily guest you into the lounge as a proud authorized user of her dad’s Platinum Card by American Express.
Follow
June 23, 2018
•
2 min read 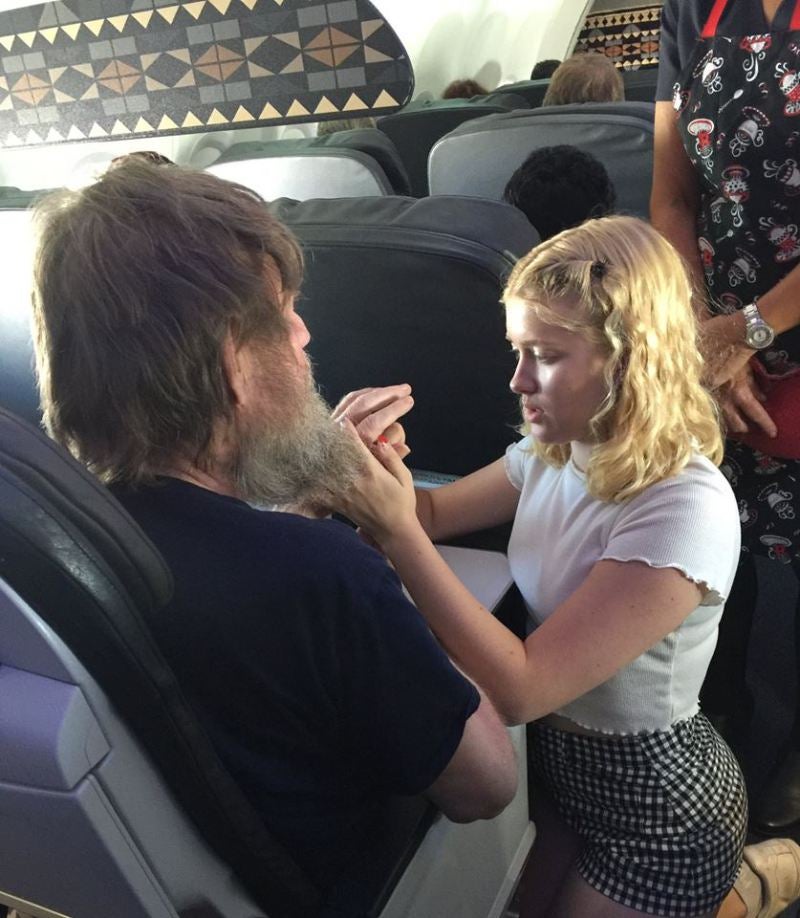 15-Year-Old Steps Up to Help Blind and Deaf Man on Alaska Air
This post contains references to products from one or more of our advertisers. We may receive compensation when you click on links to those products. Terms apply to the offers listed on this page. For an explanation of our Advertising Policy, visit this page.

An inspiring Facebook post went viral on Wednesday when a blind and deaf passenger, Tim Cook, was assisted by a 15-year-old girl, Clara Daly, on an Alaska Air flight with service from Boston (BOS) to Portland (PDX).

Cook was traveling from Boston, where he was visiting his sister, home to Portland. His sister accompanied him at the gate, but he boarded the plane alone. Passengers soon realized that Cook was by himself on the flight.

Upon boarding, one man gave up his aisle seat so that Cook wouldn't have to take the window. That passenger also helped Cook make his coffee.

After a bit, the flight attendants on the route decided to make an announcement over the PA to see if anyone on the flight knew sign language in order to better communicate with Cook. That's when Daly, who was supposed to travel direct from Boston to her hometown, Los Angeles, but had to travel through Portland after the flight was canceled, first rang her flight attendant call button.

After studying ASL for about a year, she was confident enough to finger-spell to Cook so that he could feel the letters she communicated. Daly's mom, Jane, later said that her daughter thought that the re-route was "meant to be... so she could be there to help Tim."

Daly made a couple of trips to Cook's seat to make sure that he was doing okay, and to see if he needed anything. In an interview with King 5 News, Daly shared what they talked about. "He was asking me why I was in Massachusetts, [we were] talking about my grandmother who I was visiting, he told me about his sister and his family out in Massachusetts," Daly recalled. The two also talked about how Cook was a travel salesman before he became deaf and blind. He asked the names of the passengers around him.

Lynette Scribner, one of the many who witnessed the act of kindness, was so touched by the experience that she decided to post about it on Facebook. In Scribner's post, she said that the experience reminded her, "that there are still good, good people who are willing to look out for each other."

Alaska Air even covered the story on its blog. Alaska did not offer additional comment when TPG reached out.

Our points-obsessed staff uses a plethora of credit cards on a daily basis. If anyone on our team wouldn’t recommend it to a friend or a family member, we wouldn’t recommend it on The Points Guy either. Our opinions are our own, and have not been reviewed, approved, or endorsed by our advertising partners.
See all best card offers
Related stories
Guide
How to use the Chase Sapphire Reserve $300 annual travel credit to save on travel
Guide
Cruise payment plans: All you need to know about paying for a cruise
News
There's a new $13 way to get from midtown Manhattan to JFK
News
Don't expect cheap hotel rates this summer, Marriott CEO says