Articles
Max Prosperi is a part-time frequent flyer and travel writer and full-time student. Based in St. Louis, Missouri, Max covers a variety of topics with a focus on points, miles, and aviation.
Follow
July 05, 2019
•
5 min read 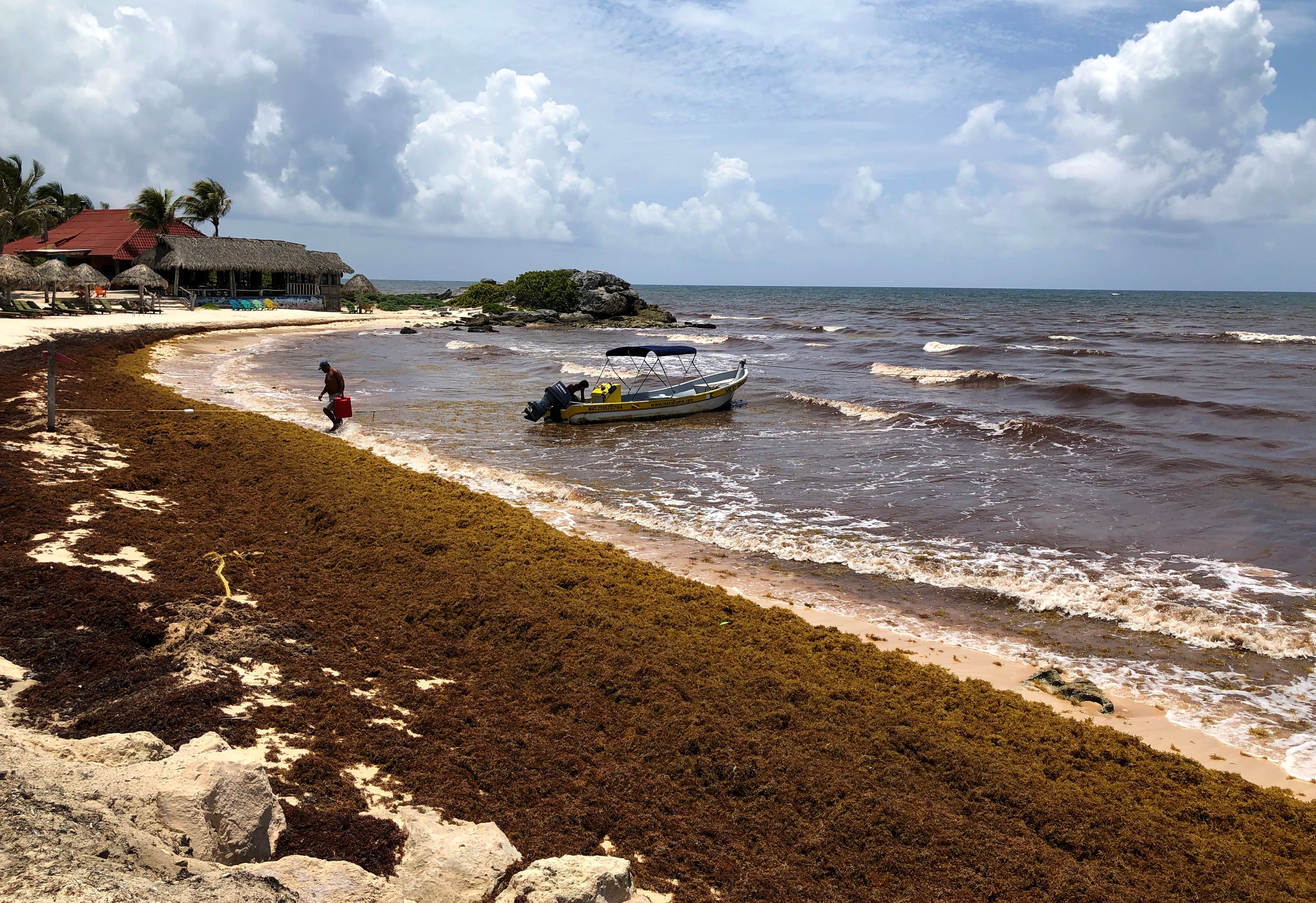 Largest Seaweed Bloom in History Inundating Some of the World's Most Popular Beaches
This post contains references to products from one or more of our advertisers. We may receive compensation when you click on links to those products. Terms apply to the offers listed on this page. For an explanation of our Advertising Policy, visit this page.

You may want to rethink your summer beach vacation, or at least, postpone it if seaweed is not your thing. Beaches across the Gulf of Mexico, in particular, the beaches along Mexico's eastern coast, are being inundated with mounds of foul-smelling seaweed in what scientists are saying is the largest seaweed bloom in human history.

Scientists recently discovered a mass of sargassum seaweed, the seaweed most commonly found washed ashore on beaches in the Atlantic, spanning from West Africa to the Americas. Likely the result of an increase in fertilizer runoff, last year's seaweed bloom weighed an estimated 20 million tons, with this year's bloom likely topping that number.

While sargassum seaweed is vital to ecosystems throughout the Atlantic Ocean, too much can have a negative effect. When the sargassum dies, the dead seaweed can damage already endangered coral reefs and even smother marine life such as sea turtles. However, it's not just ocean life that's affected by the overwhelming sargassum invasion. Popular destinations for beachgoers are also battling the bloom.

Each year beginning in April and lasting through the end of August, beaches throughout the Gulf of Mexico, the Caribbean, and parts of the Southeastern U.S. experience an increase in seaweed washing ashore. This is a result of a seasonal sargassum seaweed bloom.

Typically, the seaweed washes ashore in limited quantities and is a minor nuisance to beachgoers and locals. This year, however, an overwhelming amount of sargassum seaweed continues to wash ashore, impacting both tourists and locals. One area that has been hit especially hard has been Mexico's eastern coast, home to popular tourist destinations including Cancun, Playa del Carmen and Tulum.

If you have ever caught a whiff of seaweed, you know just how foul-smelling it can be. When seaweed washes ashore, it begins to die. When sargassum seaweed decomposes, it releases a sulfur-like odor. This sulfur-like odor can make sitting beachside rather unenjoyable. Additionally, sargassum seaweed, in large quantities, turns the blue waters off the coast of Mexico greenish-brown. Finally, these massive amounts of seaweed can even overtake beaches and become a nuisance for boats and marine vessels.

Though these may sound like "first-world problems," the seaweed bloom can have a negative effect on areas in which the economy heavily relies on tourism. However, government agencies and private companies such as hotels assure travelers that both local agencies and hotels and resorts are doing everything they can to combat this year's record seaweed bloom.

Unpredictable and difficult to divert, most local agencies and private companies spend their time and resources combating the foul-smelling seaweed by removing it from popular beaches. In the evenings and mornings when tourists and locals have returned to their hotels or homes, the seaweed is transported elsewhere to provide beachgoers with an odor and seaweed-free experience.

However, some municipalities are actively combating the sargassum bloom before the seaweed even reaches land. According to Mexico News Daily, a 1.5-mile floating barrier was installed off the coast of Playa del Carmen, Quintana Roo in Mexico to divert the flow of seaweed away from the narrow beaches of the popular tourist area.

Ultimately, Mother Nature is going to run its course. Even with floating sea-barriers and nonstop seaweed removal, tourists and locals will have to endure the flow of the foul-smelling sargassum. But there are some steps that you can take to plan around the bloom.

If you are planning to travel to Mexico, the Caribbean, and even South Florida for a beachside vacation, check online for the latest on the sargassum bloom. Sites like the University of South Florida College of Marine Science, Sargassum Monitoring, and SEAS-Forecast provide detailed forecasts and maps of the seaweed bloom. Additionally, SEAS-Forecast offers a map featuring live webcams at popular beach resorts.

If you have already made travel plans and are still unsure as to whether or not your vacation will be impacted by the sargassum seaweed bloom, be sure and call your hotel or resort. Though airlines won't likely be issuing waivers for the seaweed bloom, you may be able to modify your hotel reservation should you want to reschedule.