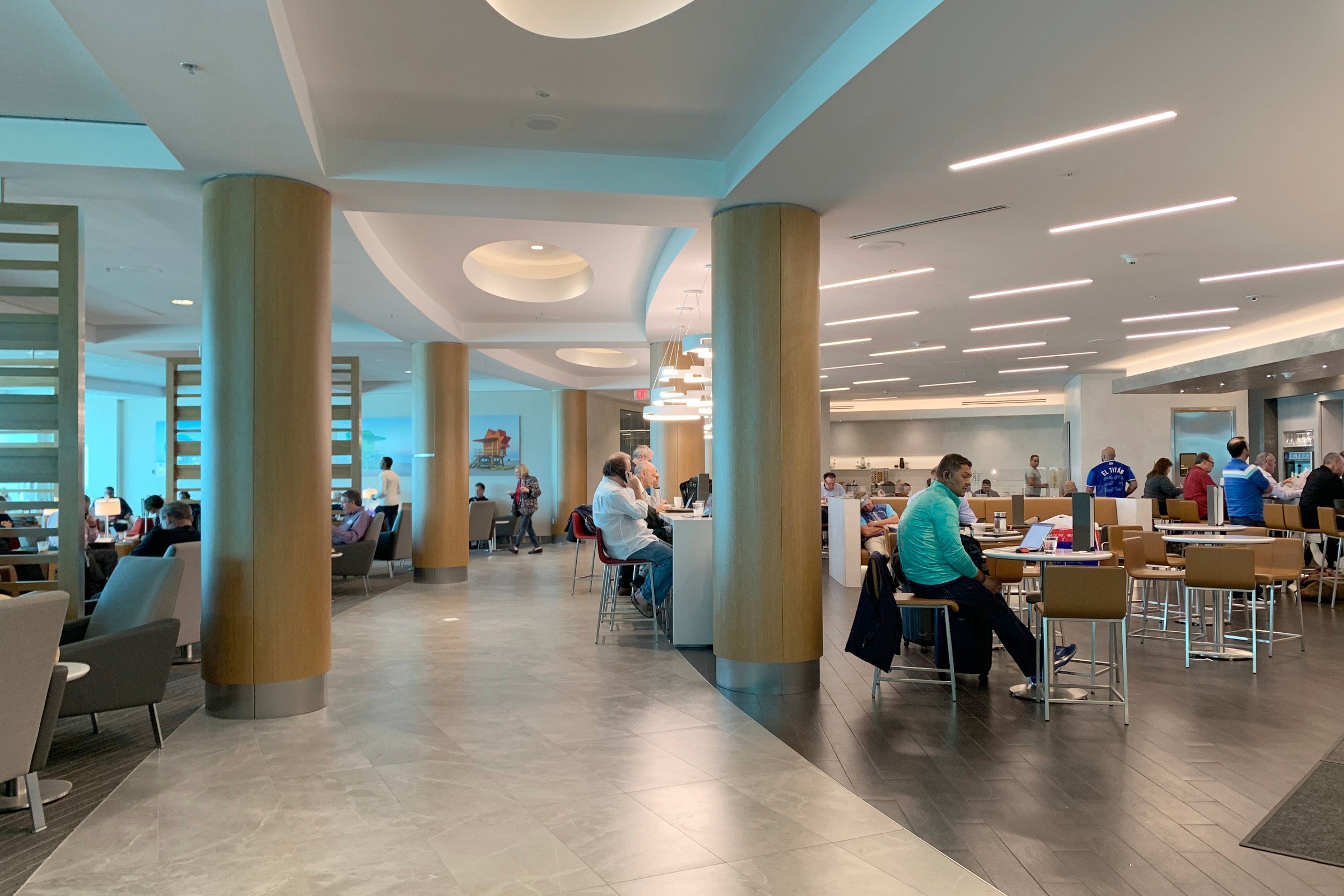 Back in 2016, American Airlines detailed plans to renovate its network of Admirals Clubs, and the first refreshed locations opened later that year. Naturally, while hubs have been a priority as well, it's a bit more challenging to renovate the largest and most popular lounges in the system.

Now, following the opening of its first Miami International Airport (MIA) Flagship Lounge in 2017, AA has completed renovating its adjacent Admirals Club as well, offering more generous access policies than the international biz lounge around the corner. On a recent trip to South Florida, I popped in for a quick look.

MIA offers three Admirals Clubs, including one in Concourse E, one in Concourse D near gate D-15 and this renovated location — near D-30 — open from 4:30am until 10:30pm and a short walk from the recently expanded Centurion Lounge.

As with other US-operated airline lounges, there's a laundry list of credentials that can get you into any Admirals Club, including this refreshed location at MIA. Options include:

And then there's another set of check-in desks upstairs, separating the Admirals Club from American's Flagship Lounge — so don't expect to sneak past.

I came across the first seating space just after the second-floor check-in desk. It's a highly trafficked area, since everyone needs to walk past to get to the main lounge, but I also found it to be the least crowded.

There's a variety of seating just down the hall as well, and while the lounge did feel fairly crowded during my afternoon visit, there were a handful of open seats to choose from.

Walking even farther in, I encountered a set of 10 day beds, most of which were completely empty. This section didn't seem to be patrolled by the staff all that frequently, though, given that there were several used cups and dishes piled up.

The lounge offers a spacious family hangout as well, which was completely empty during my visit.

There's also speedy Wi-Fi throughout, but I encountered some dead spots in the hallway near the four private showers, so be sure to stay put if you're hoping to download some content before a long flight. The lounge is well connected on the electricity front, too, with amble power outlets and wireless-charging pads.

Despite there being far quieter options elsewhere in the lounge, I wasn't terribly surprised to see that most visitors seemed to congregate near the bar and buffet.

The D-30 Admirals Club offers a selection of complimentary food and beverage items, including a mix of salads, sodas and house beers.

There was a healthy supply of cheese cubes, a staple of US-based airline lounges, along with some carrot sticks, tomatoes and chilled salads.

Unfortunately I didn't make it in time to sample AA's famous avocado toast, available free of charge in the mornings.

There were a couple of hot soups available, though, along with a dispenser of candy and snacks.

Meanwhile, over at the bar, most of the beverages come along with a charge, though Bud Light, Budweiser and Miller Lite are available for free, with house wines on the way soon.

While I didn't have much time to hang out before rushing to my flight, American's refreshed Admirals Club is clearly an improvement over some of the carrier's older locations.

If you're planning to visit yourself, I recommend heading straight back to the day beds — just be prepared to do some garbage-bussing before you settle in.