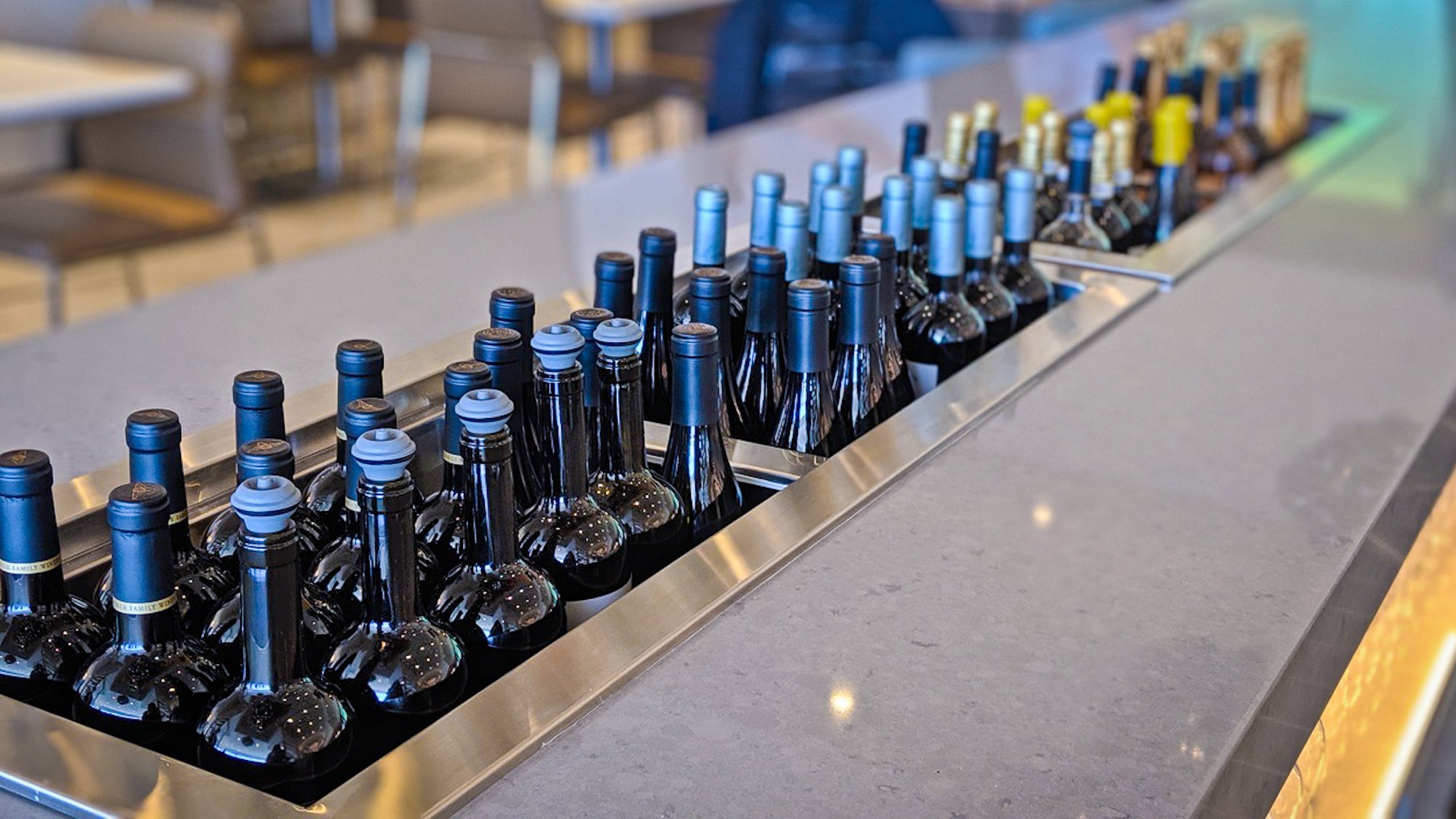 American Airlines flyers will soon be able to swirl and sip some new wines both in the sky and on the ground.

The airline has named wine writer, educator and consultant Julia Coney as its latest wine consultant.

The first Black woman (as well as the first person of color) to hold this position, Coney will be responsible for choosing the wines that will be served on board the legacy carrier’s transcontinental and international flights, as well as in its Flagship Lounges and Flagship First Dining rooms.

Coney sees this new role as a chance not only to inspire people who look like her to make their own inroads in the wine, food and travel industries, but also to encourage flyers to try new things.

“Now that we’re traveling again,” Coney said, “how can we explore? I want American Airlines passengers to pursue curiosity from the glass to the plane.”

Anyone who has followed Coney’s career over the last few years shouldn’t be surprised by this announcement. Back in January of 2018, after years of experiencing indignities and racist comments at wine industry events and on work trips as a travel writer, Coney was moved to write an open letter in response to a Somm Journal article by well-known wine writer Karen MacNeil.

The piece detailed a glass ceiling for women in wine, but failed to include any accounts or quotes from Black women.

“I hoped the article would give me insights,” wrote Coney. “It did, but it also lacked what is obvious in the wine industry, too — diversity.”

Coney’s letter became a spark for her career, Black Lives Matter protests fanned the flames, and for several years she has been blazing a trail around the world with her candid writing and speaking on diversity, equity and inclusion in the wine industry.

The recipient of Wine Enthusiast's 2020 Social Visionary Award, Coney was also named to UC Davis’ Department of Viticulture and Enology’s advisory Executive Leadership Board in 2021. Even more recently, Wine Industry Network named her one of “Wine’s Most Inspiring People” for 2022.

Coney is also the founder of Black Wine Professionals, a resource that connects food and beverage industry employers and members of the media with Black professionals in the world of wine. She is a contributing editor for online drinks platform VinePair, and has been featured in The New York Times and Forbes among many other publications.

Already a rising star in the wine industry when the pandemic began, Coney has since attracted an even larger following with her informal, lively food-and-wine pairings on Instagram.

Her fan base includes the James Beard Foundation, which reached out last year to gauge her interest in working with American Airlines as a wine consultant.

Since 2019, the James Beard Foundation has had an exclusive partnership with American Airlines to place menus and offerings from James Beard-affiliated chefs on American’s transcontinental and international flights, as well as in Flagship Lounges and Flagship First Dining locations.

Coney, foundation representatives thought, would make the perfect nexus for this partnership.

“We’ve been impressed with Julia’s work as both a wine educator and industry disruptor since we interviewed her in December 2020,” Kris Moon, president and chief operating officer of the James Beard Foundation, told TPG. “Her talent and encyclopedic knowledge of wines pairs effortlessly with her advocacy work to uplift Black voices in the industry through Black Wine Professionals.”

Coney seemed like the perfect fit for American Airlines, too.

“Julia is an unbelievable force of nature in the wine industry,” Clarissa Sebastian, managing director of premium customer experience on onboard products, told TPG in an email. “Wine is an experience that should be enjoyable and approachable for everyone. We share that commitment with Julia and our partners at the James Beard Foundation.”

As another component of this partnership, American Airlines has also announced that James Beard Foundation award-winning cookbook author and dietitian Ellie Krieger will help design new onboard wellness-focused menu items.

A wine selection for the skies

For complete transparency, I have been friends with Julia Coney for a decade. We both lived in Washington, D.C., from 2015 to 2018 (she is still based there and in Houston), and embarked together on wine education and career paths. I eventually relocated to Sonoma County, California, where she visited me just before COVID-19 lockdowns commenced in March 2020. After a two-year separation, we recently reunited for a wine-tasting trip in Napa, as well as a chat about her next chapter with American Airlines.

Ironically, Julia doesn’t actually love to fly — but she’s intensely curious about the world, so she travels a lot. To ensure that she has access to the comforts of a lounge and premium seats when possible, she’s a strategic points and miles collector, too.

“I don’t just roll up to the plane,” she said. “I always need preparation in a lounge, with wine to relax me. Then on the plane, it’ll be a different wine, depending on the food being served and what intrigues me on the list. I love to challenge my palate.”

In recent years, Coney has increasingly lounged and flown with American Airlines.

It’s the carrier of choice for luxury travel agency Up in the Air Life, for which she plans and leads wine and culinary tours for Black travelers to France, Italy, China, Portugal and other destinations.

Up in the Air Life owner Claire Soares remembers that in 2017, Coney told her, “As a person who drinks wine on planes, someday I want to choose wine for an airline,” almost as if predicting her own future.

And choose Coney shall.

“Each chef’s menu has to consider what’s going on in each lounge, in terms of the local dishes, the ingredients and the clientele,” Coney said. “And I feel it’s the same with wine. Like the lounge at JFK, I think, ‘Hey — let’s go North Fork of Long Island, let’s go Finger Lakes.’ … At LAX, why not have wines from nearby Santa Barbara and Paso Robles? There’s always something local and special we can put in these big hubs.”

In her work as a wine journalist and competition judge, not to mention as a store manager at D.C.’s Wardman Wines, Coney has sought out small-production wines made by people of all different backgrounds. As American Airlines’ wine consultant, she hopes to introduce the carrier’s travelers to some of her favorites, even if only for a limited time on select routes.

She’s especially eager to bring a new energy to pairing wine with local, traditional American foods, especially those on American Airlines’ routes in the South and Midwest. “Southern cuisine is big, it’s bold, it’s heavy, it’s not Eurocentric — people don’t always see it as wine-friendly,” she said. “And the Midwest: Have you ever paired Champagne with a hot dog? It’s a game changer.”

Part of Coney’s mandate will also be wine education sessions with the airline’s lounge staff.

“Servers in airport lounges are generally pouring wines just because we ask for them, not necessarily because they know much about them,” Coney said. “Some of these wines are free, others are more elevated wines for purchase — but if you’re at a Flagship or Flagship First Dining lounge having a full meal, you’re likely to want a more thoughtful wine pairing.”

By talking to the lounge attendants about the wines they are pouring for patrons, and why, Coney hopes it might start more conversations among the airline’s employees and passengers as well as add an extra layer of service into the lounge experience before flyers step on board their flight.

Coney will also be choosing wines to pair with the snacks served in American Airlines’ economy and premium economy cabins.

“With every pairing choice, the idea is: How do we make it fun? How do we make it approachable? All those things at the back of the plane represent an opportunity,” she continued. “Like, I get to pair Fig Newtons and wine! If you’ve never had pinot noir and a Fig Newton, you’re missing out. And imagine sugar snap pea crisps paired with an Asti Spumante: There’s now this salty-sweet thing going on — and that’s fun.”