Articles
Emily McNutt is The Points Guy's Global News Editor and is based in London.
Follow
Sept. 28, 2019
•
8 min read 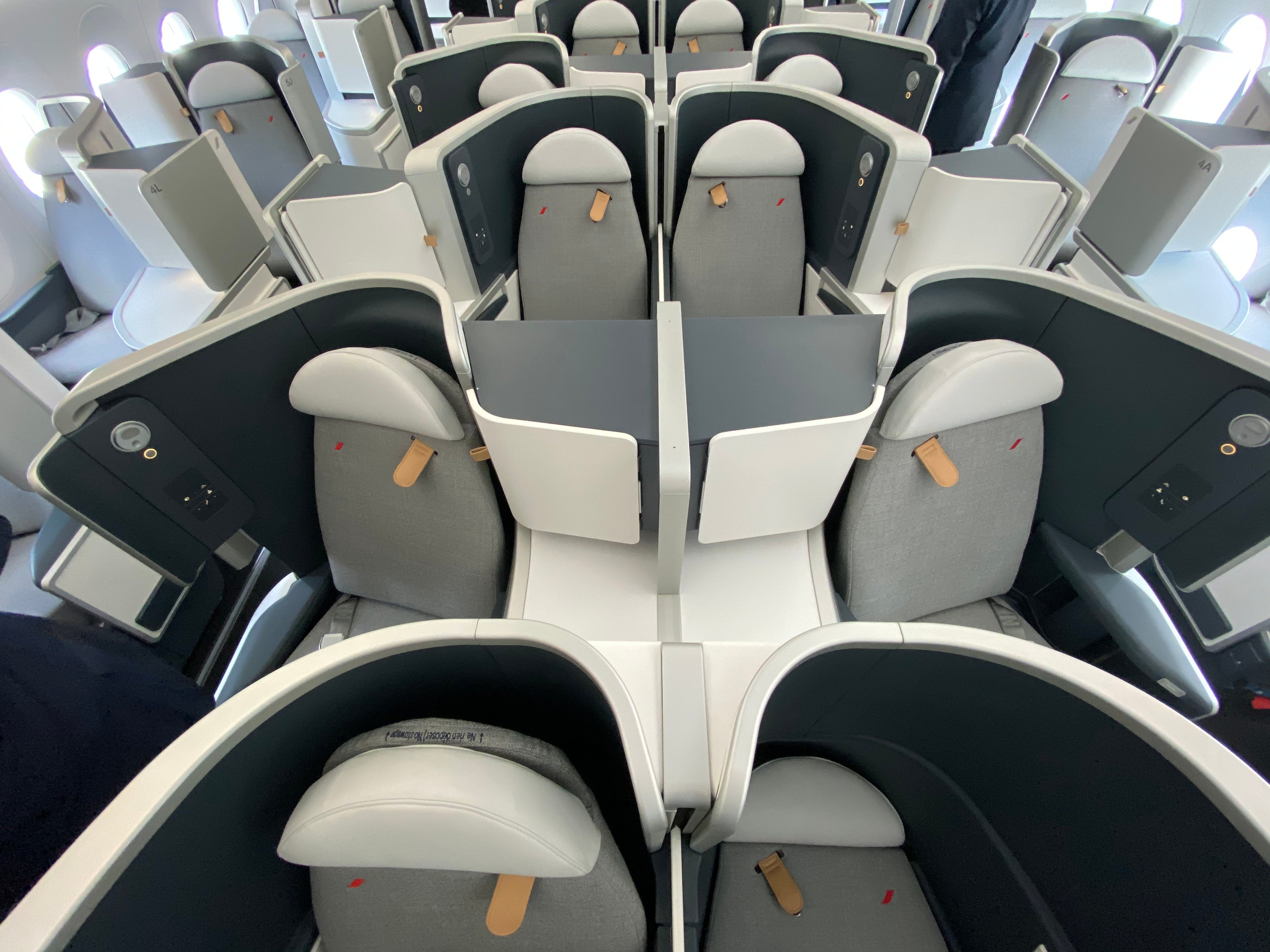 On Friday, Air France became the latest carrier to take delivery of an Airbus A350-900. The carrier has 28 of the aircraft on order, which it expects to complete delivery of by the end of 2025.

The exterior of the aircraft is painted in traditional Air France livery, though with some added elements. The carrier painted the name of the aircraft, "Toulouse", on the exterior, bringing back a classic element. Additionally, Air France opted to bring back a livery element by way of the hippocampe, a seahorse painted both on the side of the engine and on the A350's iconic wingtips.

On the inside, Air France has also introduced some new products. Both the business-class seat and the premium economy seat are new products for the carrier.

The business-class cabin on Air France’s A350s features a total of 34 Safran Optima seats in a 1-2-1 configuration.

Each of the seats features 79 inches of pitch. When in its lie-flat position, the seat measures nearly two meters, or 78.8 inches.

The cabin feels light and fresh, with bright upholstery and design elements. Earlier this year, Air France began retrofitting some of its A330 aircraft with an entirely new business-class product.

While the A350 business-class seat is not the same that passengers can expect to find on Air France’s retrofitted A330s, this product is better. The retrofitted A330 product features a 2-2-2 configuration, whereas this new product is 1-2-1, meaning each passenger gets aisle access.

So while the upholstery of the seat looks the same as its relatively new counterparts in the A330, the A350 will be the business-class product you’ll want to select if given the choice between the two aircraft.

Each of the seats features an 18.5-inch inflight entertainment system. In addition, each features in-seat power by way of a full power outlet and USB ports.

There’s a small storage area next to the shoulder of each of the passengers with enough room to store a water bottle, headphones and some smaller items.

In the business-class cabin — like the rest of the aircraft — there are no cathedral ceilings, meaning there are overhead bins throughout the cabin. In addition, there are no individual air vents for passengers.

Windows in the business-class cabin are a nice improvement. Window shades are automatic, allowing you to customize how much — or little — light you want.

Interestingly, Air France opted not to go with a suite option for this business-class cabin. The carrier's close partner Delta Air Lines features a suite by way of the Delta One Suite on its A350s and select other aircraft. Additionally, British Airways and Virgin Atlantic, which both took delivery of their first A350s earlier this year, both feature a suite product in their updated business-class cabins.

The premium economy cabin, which is on the rather small side, features just 24 Recaro seats, which are spread across a 2-4-2 configuration.

Each of the seats features 38 inches of pitch and nearly 19 inches of width.

The premium economy product on the A350 is entirely new for Air France. The seats are lighter than any predecessors, which means less weight and therefore less fuel burn.

With a completely new product also comes additional recline. Each of the 24 seats in the cabin features a full legrest, which is complemented by a footrest. Additionally, the seat itself reclines 124 degrees, which, when testing, felt incredibly generous.

Upon trying the seat, each of the three aspects put together meant an incredibly comfortable journey. The recline is very generous, but coupled with a legrest and footrest at each seat, you’ll get a comfortable experience on long-haul flights.

Each of the seats also features an 13.3-inch inflight entertainment screen. The screen can be operated by both touchscreen and remote control, which also has a touch scroll functionality. The screen can be tilted in order to accommodate when the passenger seated in front is reclined.

In addition, each of the seats in premium economy have plenty of power supply opportunities. Each seat has its own universal power port in addition to two USB ports. One USB port is located on the IFE screen, while the other is built into a small cubby alongside the hip of the passenger.

Like in the business-class cabin, Air France opted to not go with individual air vents for passengers.

Farther back in the aircraft, you’ll find the economy cabin, which is made up of 266 Safran seats, arranged in a 3-3-3 configuration.

Each of the seats in the economy cabin feature a generous 31 inches of pitch.

The seats each have their own 11.6-inch inflight entertainment screen, which is touchscreen controlled.

Unfortunately, Air France opted not to give passengers seated in economy the option of a full power outlet. However, each passenger has the option of recharging their devices via a USB connection built into the inflight entertainment system.

Across all three cabins, passengers will have access to two live camera views — a tailcam and a front-facing camera.

Overall, Air France's A350 cabin will surely be a comfortable way to fly. In business, passengers can look forward to aisle access and a bright, airy cabin. However, the lack of a suite door could prove to be less-than-ideal for passengers looking for supreme privacy. The premium economy cabin is surely comfortable, with each seat offering plenty of recline.

Beginning Oct. 7, Air France’s A350 will begin flying its route from Paris Charles de Gaulle (CDG) to Abidjan, Ivory Coast (ABJ), via Bamako, Mali (BKO), for crew familiarization. For the winter season, beginning Oct. 27, Air France will fly the A350 from Paris Charles de Gaulle to Toronto (YYZ). Then, as Air France gets its third of the A350s, it’ll begin flying to Cairo (CAI), Seoul (ICN), Mumbai (BOM) and eventually Bangkok (BKK) in Summer 2020.