Articles
Charlie Page is a senior first officer on the Boeing 787 Dreamliner with over 10,000 hours of flying experience, both around Europe on the A320 family and worldwide on the B787. He is also a freelance writer, contributing to a range of print and online publications.
Sept. 14, 2019
•
12 min read 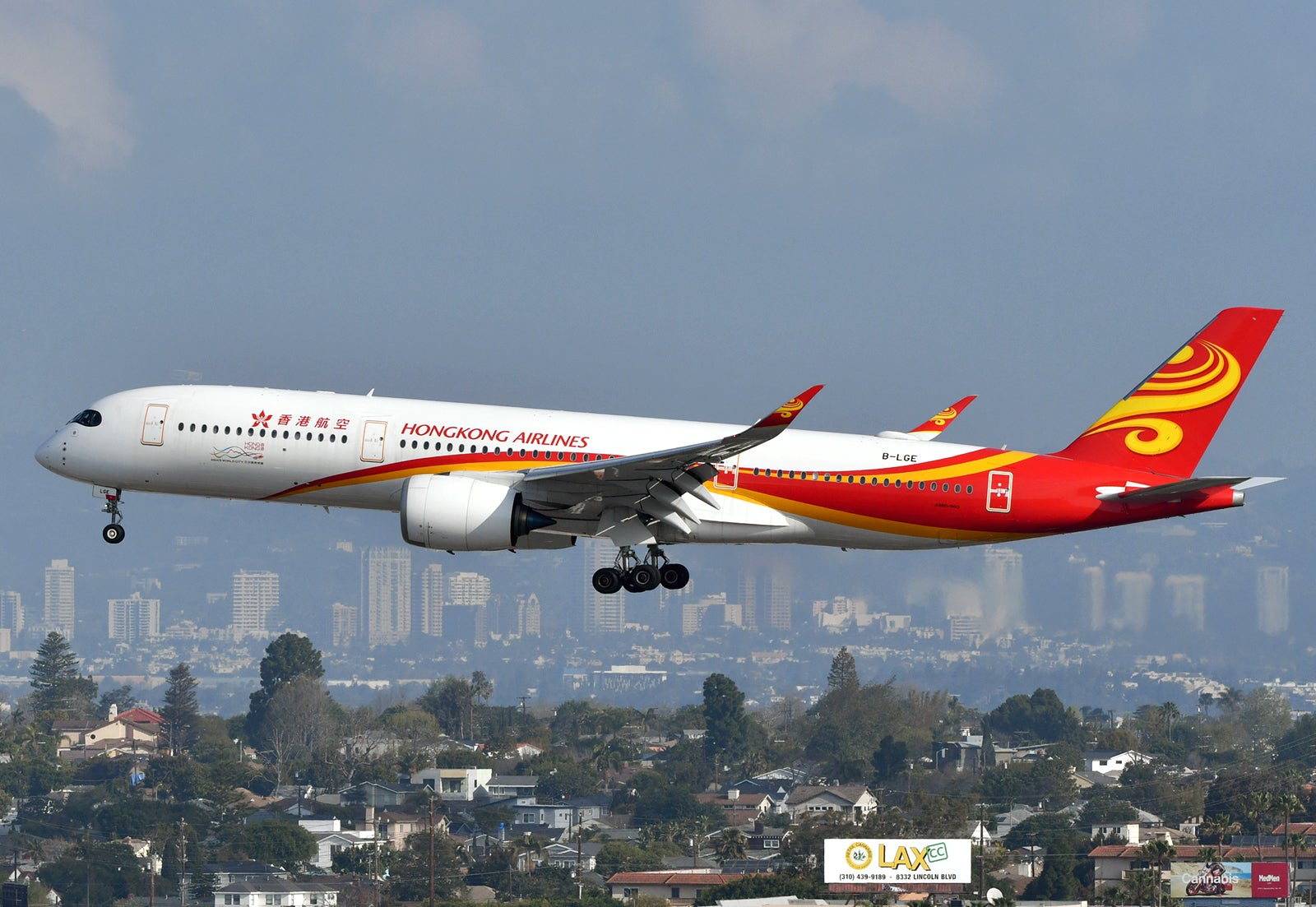 This week, Virgin Atlantic launched its brand new A350 to New York. The sleek-looking aircraft lifted effortlessly into the sky just before 2:30 p.m. on Tuesday, powered by two Rolls-Royce Trent XWB engines. The 3,500-mile journey took just more than seven hours, delivering the passengers and crew safely to JFK — albeit a few minutes late.

The flight was an important moment in aircraft development, continuing the shift from fuel-thirsty four-engine aircraft toward much more efficient two-engine aircraft. When the effects of the aviation industry on the environment are very much at the forefront of peoples' minds, the change to aircraft like the A350 is essential to doing what airlines can to reduce their carbon footprint.

However, it didn't seem that long ago that four-engine Virgin aircraft had the slogan "4 engines 4 long haul" emblazoned on their fuselage. Whilst this was more a PR stunt to harness the public perception that aircraft with four engines were much safer than those with two, the reality couldn't be more different.

Out with the old, in with the new

Four-engine aircraft are fuel hungry. In an age where the environment — and let's not kid ourselves, profit — are of utmost importance, they are not everyone's friend. The 747 is an iconic aircraft and is still flying in the fleets of a few airlines around the world. The A380 is a passenger favorite, but not so much with airlines.

Whilst an AvGeek favorite, the 747 is loud and dirty. A throwback to its 60s heritage. It's still loved by the crew who work on it and the passengers who travel on it, but its dent on the environment and the spreadsheets of airlines hasn't gone unnoticed.

The A380 had been somewhat of an early success, but when Emirates recently decided to cancel its outstanding orders, Airbus announced that it would cease production of the aircraft after the remaining commitments were delivered.

In recent years, the shift has been toward far more fuel efficient aircraft such as the 787 Dreamliner, which I fly, and the A350. These aircraft can fly exactly the same routes as safely as their four-engine counterparts, but for a fraction of the fuel. A win for both accountants and environmentalists.

With the advances in engine and aircraft reliability since the first trans-Atlantic crossing 100 years ago, regulators have allowed two-engine aircraft to fly farther and farther from the nearest adequate airfield in the event of an engine shut down.

Initially limited to just 60-minute single-engine flying time from the nearest usable airfield, the routes that aircraft could fly were pretty limited. Nowadays, 180 minutes is the norm, allowing aircraft to cross the globe on almost any route they wish.

The A350 has pushed the boundaries of ETOPS flying, certified to ETOPS 370, allowing the aircraft to be over six hours single-engine flying time from the nearest airfield.

The benefits of ETOPS

The obvious benefit of ETOPS flying is quicker flight times. Instead of having to fly odd routes to stay within an hour of an airfield, aircraft can fly 'as the crow flies' and head straight for its destination as much as possible.

The diagram below shows the route from London to New York which an aircraft would have to take under a 60-minute rule and also the route ETOPS 180 allows.

The 60-minute route is not only longer, but also requires the airfields at Shannon (SNN), Keflavik (KEF), Kangerlussuaq (SFJ) and Goose Bay (YYR) to not only be open but also usable — more on this later. The 180-minute route allows the aircraft to fly straight using just Shannon and Gander (YQX). Passengers arrive at their destination sooner and the aircraft spends less time in the air. The environment also benefits with a reduced fuel burn producing fewer carbon emissions. It's a win-win situation for everyone.

ETOPS is also of benefit in other ways. Routes that may not have been financially viable 'flying the long way' all of a sudden become feasible. These 'thinner' routes may have been too costly using a large four-engine aircraft, but the ETOPS range of an aircraft like the A350 could make this possible. A good example of this is the Singapore to New York route.

Singapore Airlines used to operate this on an A340-500, but the costs of running the four-engine aircraft made the route commercially unviable. However, with its recent delivery of the A350, the airline will soon be starting the route again,

It's therefore clear why ETOPS flying is of great importance in the modern world. However, like with any progression, there have to be steps taken to ensure the safety of the operation. After all, your pilots' sole responsibility is to ensure your safety for the entire time you're on board.

With the change to ETOPS flying came rules and regulations that we must follow. Before, during and after each flight, we must adhere to a number of procedures to ensure that everyone on board is kept safe.

The majority of procedures for an ETOPS flight actually take place on the ground before the aircraft departs. As mentioned before, the aircraft must stay within its designated ETOPS single-engine flying time from an adequate airfield. But what exactly does adequate mean?

An airfield is considered adequate if, at the expected time of use, it is open and available and also equipped with extra services such as Air Traffic Control, emergency services, weather-reporting facilities, lighting and communications.

A runway must be available that provides enough stopping distance, taking into consideration the weight at which the aircraft would be at that stage of flight, the wind, temperature and surface conditions. For more on what factors affect the safe stopping of an aircraft, check out my previous article, The art behind a comfortable landing: How pilots calculate bringing an aircraft to the ground.

The airfield must also have the services and facilities to allow the aircraft to make an instrument approach to the expected runway whilst complying with the minimum weather legalities of the airfield.

In order to account for any changes to the forecast, the weather forecast at the earliest time of landing and ending one hour after the latest nominated time of use must be taken into consideration. Before I talk about the weather required, let's have a quick chat about approaches.

A PA is an approach flown using the instruments in the flight deck, fed by signals which give both vertical and lateral guidance down toward the runway. In most large airports, this is done by a setup of antennas on the ground that send signals to the aircraft called an Instrument Landing System, or ILS.

An NPA is also an instrument approach but only uses lateral guidance, not vertical guidance. Traditionally these would be based on a beacon on the ground that would emanate a signal to the aircraft to determine its position, but would not provide any guidance for the descent to the airfield.

Both PAs and NPAs have a set of minima to which pilots must adhere. Firstly, there is a minimum visibility (VIS). This is a distance, reported from the airfield, that must be achieved before the approach can continue beyond a certain point.

Secondly, there is a Decision Altitude (DA) for Precision Approaches and a Minimum Decent Altitude (MDA) for Non Precision Approaches. This is the altitude below which the pilots are not allowed to fly without making visual contact with the runway. These minima are displayed on the approach charts which pilots study before each landing.

If an airfield does not fulfill any of the above, it is the captain's responsibility to ensure that it is not used as an ETOPS alternate.

Without fuel, an aircraft won't get very far. On any commercial flight, there are strict rules governing how much fuel we must take. To learn all about that, check out my previous article, How do pilots know how much fuel to take on a flight?

On ETOPS flights, the fuel is even more critical — running out of juice when you're three hours from the nearest airport isn't top of anyone's wish list. Yet, it's not for the normal situation where this is important, it's for the non-normal situation.

Aircraft engines operate most efficiently at higher altitudes. This is why we fly as high as our weight will enable us. However, if we were having a bad day and there was a loss of cabin pressure, we would have to descend the aircraft down to 10,000 feet or the lowest possible altitude depending on terrain below us. Over the Atlantic, this would be 10,000 feet where the engines would be far more thirsty than at 38,000 feet.

If we were having a really bad day, we may also lose an engine whilst flying along at 10,000 feet. In this situation, flying at a much lower altitude on one engine, we must still have enough fuel to reach our nominated ETOPS alternate.

Before each ETOPS flight, engineers carry out certain checks to ensure that the aircraft is compliant with the more stringent ETOPS requirements. Among other things, three electrical generators must be working (the 787 normally has six) and the engines must have enough oil to allow the aircraft to reach its destination or divert at the most isolated part of its journey.

During the flight, fuel management is key. To do this, each time we pass a waypoint on the route, we perform a fuel check. We note how much fuel we actually have in the tanks and compare this to the expected amount at this stage of flight. If, for some reason, we notice that we have less fuel than expected, a plan must be made to deduce the cause. In extreme cases, this may result in a precautionary diversion to an airfield along the route.

Flying on a twin-engine aircraft is just as safe as flying on a four-engine one. Before heading off over remote areas some serious thought is put into the plan based on international aviation laws. Whether the aircraft is operating the usual ETOPS 180, or pushing boundaries by flying ETOPS 370 like the A350, there's always a plan up the pilot's sleeves.