Articles
Mary Kearl has been traveling with her two-year-old and husband for 13 months (and counting), and has written about her travel experiences for Business Insider, Lonely Planet, and Popular Science. Follow her remote work/travel life on Instagram @SeetheWorldParents.
March 22, 2020
•
9 min read 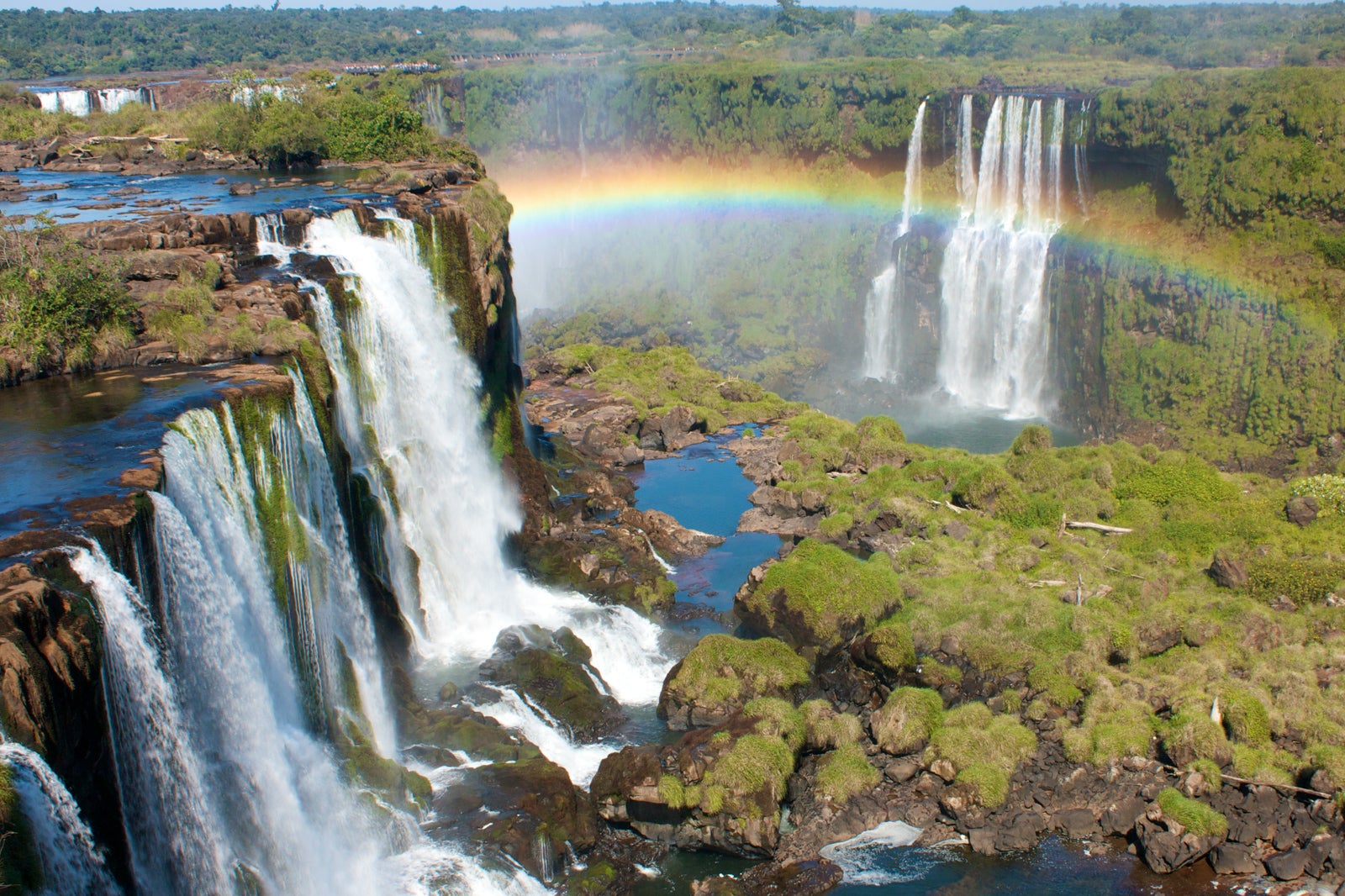 Editor’s note: The team at The Points Guy loves to travel, but now is not the time for unnecessary trips. Health officials note that the fastest way to return to normalcy is to stop coming in contact with others. That includes ceasing travel. We are publishing travel content because we should all use this time to think about and plan our next adventures. TPG doesn’t advise booking trips for travel until the late spring or early summer — and even then be mindful of cancellation policies.

Where are you right now? Most likely your answer will be a single place. But there are locations where you can technically be in two (or more) places at once. Here are seven such spots, all in the Western Hemisphere, from the Four Corners in the United States to the International Peace Gardens on the U.S./Canada border to Trifinio, a mountain peak where the borders of Honduras, El Salvador, and Guatemala meet.

For a small entry fee ($5 in the offseason from October to February and $10 during the peak travel season of March to September), you can visit the Four Corners Monument and be in four states — Arizona, New Mexico, Colorado, and Utah — at once. Distinct from the U.S. National Park system, this site is part of the Navajo Nation and the Navajo Tribal Parks system and is located within the Navajo Nation Reservation, which is comprised of more than 25,000 square miles of land across those four states. (For those who like taking pictures at border crossings, don't miss the nearby Navajo Nation Welcome sign.)

The area has a number of other worthwhile destinations for longer stays, including the Navajo Tribal Parks of Monument Valley, Canyon de Chelly and Lake Powell, as well as the Navajo Code Talkers Museum and Explore Navajo Interactive Museum, both in Tuba City, Arizona.

There's some debate about which side of the massive Iguazu Falls — a collection of 275 waterfalls twice as tall and three times as wide as Niagara Falls — offers the best experience, the Argentine side or the Brazilian side. (Pro tip: Go to both sides and decide for yourself — you won't regret it.) But there's no question that the area is a huge attraction that draws one million visitors each year. There is, however, a lesser-known location about 12 miles away that's worth a detour. The Triple Frontier is where the borders of three South American countries — Argentina, Brazil, and Paraguay — meet at the mouth of the Iguazu River. For about $6 you can visit the Three Frontiers Landmark (Marco Das 3 Fronteiras). There's also another cross-border tourist site in the area, the Itaipu Dam. Situated between Paraguay and Brazil, Itaipu generates more electricity than almost any other hydroelectric power station on the planet.

For $20 per vehicle, you can experience both the U.S. and Canada in one beautiful park created to commemorate the friendship and peace between the two countries. Situated near the geographical center of the North American continent, the International Peace Garden has more than 155,000 flower displays spread across nearly 900 acres in North Dakota and 1,450 acres in Manitoba, Canada. There's even a customs station within the park so that visitors can tour it all at once -- bring a passport or government-issued ID with copy of your birth certificate.

Since it was formed in 1932, the enormous garden has attracted thousands of tourists each year — I was one of them when I toured North Dakota and took an obligatory photo with a foot in each country. As to that geographical center of North America, its location is now up for debate. The long-standing claim went to Rugby, North Dakota (there's a 15-foot-tall monument commemorating the spot), but recent recalculations fix the center in a place called Center, North Dakota. (Yes, really. It is miles from the border and was named because it was the center of its county.)

It's a long trek — 45 minutes driving up a steep muddy path followed by a four-mile hike taking five hours — to the top of Parque Nacional Montecristo, but when you reach the peak, at 7,933 feet, you'll find yourself standing on El Trifinio, where the borders of El Salvador, Honduras, and Guatemala meet. It's a tough climb and I might have to wait until my nieces, nephews, and toddler are older to accomplish it. Meanwhile, a boat tour of the nearby Lago de Guija, located on the El Salvador and Guatemala border, may be more manageable.

Growing up, I made an annual trip to my grandparents' cabin in the mountains in northern Utah on the Idaho border. My cousins and I would spend hours swimming in the brilliant turquoise-blue Bear Lake — known as the "Caribbean of the Rockies" for its unique hue — and joke about swimming to Idaho. It turns out we just might have. The 20-mile-long lake is evenly split between the two states, so it's possible to swim in two states at once. (Loch Ness isn't the only lake with a monster, as far back as the 1800s, locals have claimed there are monsters swimming in these waters too.)

After your swim, fill up like a local — with a raspberry shake made from berries grown in the area. Everyone has their favorite neighborhood spot, but my family has always preferred LaBeau's.

There are two separate Texarkanas (Texarkana, Arkansas and Texarkana, Texas), each with its own mayor and city council, but the two cities share a post office and courthouse, appropriately named the State Line Post Office and Federal Building. It is sited in both states — the only U.S. Post Office in the country with that distinction. (The State Line Post Office and Federal Building is supposedly the most photographed courthouse in the U.S. after the Supreme Court in D.C.) There are local history museums dedicated to cars, the region's history, and the area's railroad station. And President Bill Clinton's birthplace, now a National Historic Site with a visitor center, is also within easy driving distance.

Not to be confused with the Texarkanas, there are two Texhomas on Texas's other border, the one with Oklahoma: Texhoma, Texas (population: 364) and Texhoma, Oklahoma (population: 926). The two cities have had legal battles about which municipality encompasses which local businesses, but the two now share a unique cross-border public school system. In kindergarten through fourth grade, kids are enrolled in Texas, and fifth- through 12th-graders go to school in Oklahoma.